Travel to an eco-friendly estancia in Uruguay in South America

I enjoy finding hidden gems when I travel and places where I can ride that make me feel like I am stepping back to a simpler, more natural time.

The estancias that I visited in Uruguay, a small, rural country in South America, were some of these. At La Salamora, a family-run lodge powered entirely by wind power in the rocky, rolling grasslands of Lavalleja not too far from the resort area of Punta del Este, I have been discovering Uruguayan culture through Alicia Morales, who owns the estancia with her husband Daniel, a veterinarian. 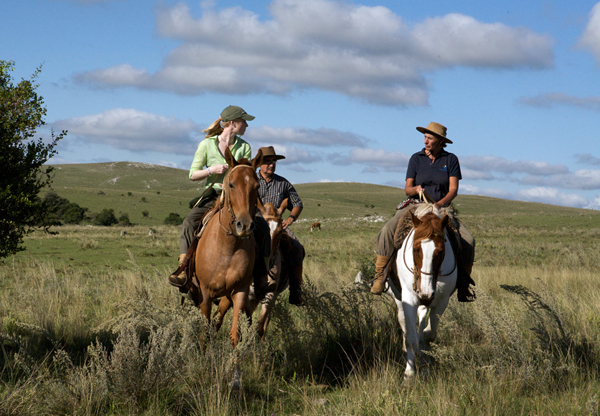 Riding here, on sturdy Criollo horses, I’ve ventured to sights with history, stunning scenery and energy, yes energy. La Salamora is remote. We traveled down a long, bumpy dirt road past sheep and cattle and rocky rolling hills to get to La Salamora.

The ranch buildings consist of a set of historic stone buildings, which Alicia and Daniel rebuilt, and the main lodge, a salamander and yellow colored ranch house located about 80 miles from Montevideo, Uruguay’s Capital, and 49 miles from Punta del Este. Alicia works to make guests feel like they are staying in a home, not a hotel. 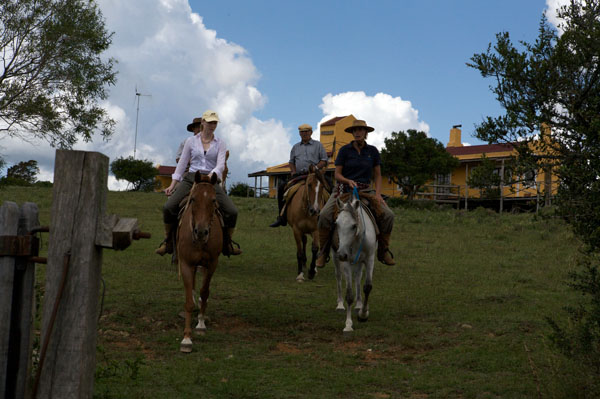 With only five rooms, the ranch is small, but that’s one reason why you come here—to hang out with Alicia and her gaucho, Gilberto, ride horses, meet the neighbors and feel like you are living in Uruguay.

I felt right at home, as I walked into the living room, surrounded on all sides by porches, and centered upon a large fireplace and a kitchen with a giant grill. I asked Alicia who had decorated and designed La Salamora and she said that she had. I was impressed as I looked around at the details. 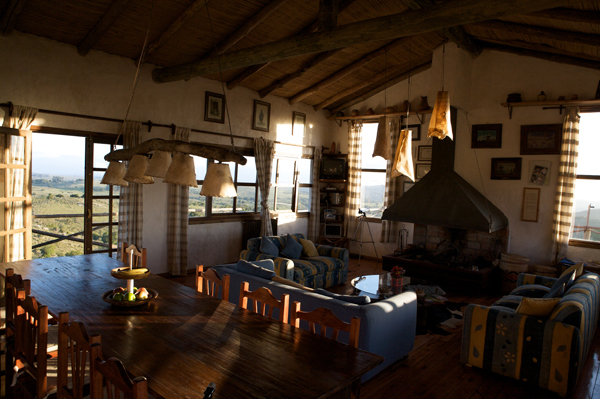 The lampshades over the dining table were handmade by Alicia. Various antique mate mugs (Mate is a hot tea that is the national drink in Uruguay), lined the mantle above the kitchen.

La Salamora is a place that you can feel good about staying, because it is eco-friendly. The ranch is run entirely by wind power. There is running hot water and electricity, but it is all self-sustaining. This means that you don’t look out to a sea of power lines, because you are off the grid. 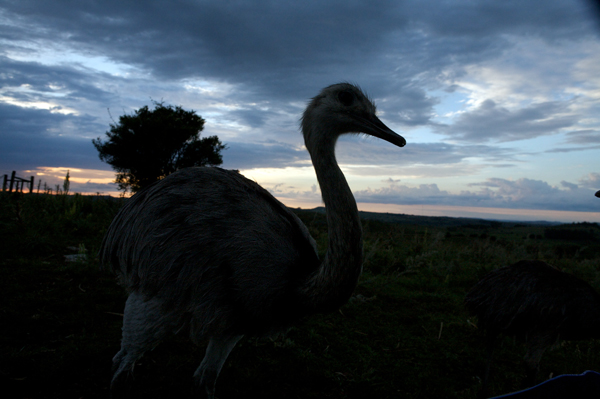 Alicia and Daniel said that they don’t worry about the wind not blowing here, because there is always a steady breeze in these hills. Daniel and Alicia are working with the Uruguayan government to preserve and restore the native flora and maintain the biodiversity of the native forest in the area. Alicia knows every plant in the area and its native use and loves the trees and nature, which would come in handy on our first ride.

Alicia, Daniel, Gilberto and I rode out from La Salamora on strong Criollo horses. Since I am in Uruguay, I have decided that I want to full experience, which means also wearing some of the local riding attire. I wore a new pair of bombachas, cotton pants for riding that are worn by the gauchos and super comfortable. 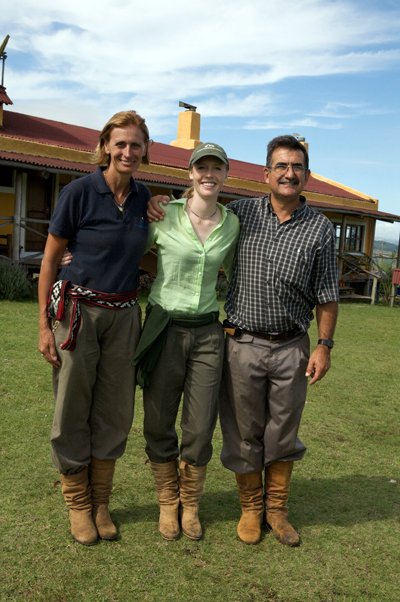 They have a wide leg that cinches at the ankle, so that you can slip your feet into a pair of soft leather boots. It was my first ride on the ranch, so I at least felt like I fit in a little standing next to Gilberto the gaucho. Later in the ride as the sun shone down, I would be happy to be wearing the cool bombachas, especially since the sun is super intense here in Uruguay.

Our final destination for our first ride would be the top of the Cerro de los Vientos (Windy Hill). Our goal was to make it there at sunset. We had plenty of time, but knowing the way I like to ride, we would be stopping to explore a lot of different things along the way. 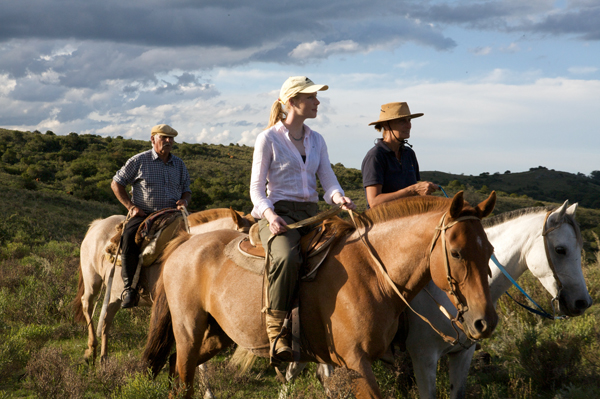 I rode a nice, responsive Criollo horse named Diablo out from the ranch. The neat thing about exploring on horseback is that you can travel long distances and see a lot. We would have multiple stops on our first ride with Alicia.

We trekked into a stone corral that was used to keep cattle and other animals and protect them from predators before there were fences in the area. I could tell how long the corral had been there because of the thick vines growing around the stones.

Alicia and I got off of our horses to take a closer look at some native plants. In this regard, Uruguay reminded me of Belize, where they take to the forest to use plants for medicinal purposes. Alicia pointed out a plant that men boil and drink as a tea to help them with any issues in the bedroom. Yes, locally it’s called the Viagra plant. She also pointed to a plant that people in Uruguay use to make rope. All around us there were plants with different uses. These native plants are fascinating to me.

In order to begin our climb to reach Windy Hill, we had to pass through a neighbor’s farm. This normally wouldn’t be a big deal, except that Alicia’s neighbor keeps an ornery donkey who wants to rumble or unite with her horses, probably depending on the day. Gilberto the gaucho, used his rebenque (leather whip) to attempt to scare the crazed donkey off, but it was to no avail.

I couldn’t stop laughing as the donkey ran beside us, Gilberto swinging his whip wildly in circles in the air and yelling, as the donkey loudly hee hawed. Poor guy. He just wanted a friend. Gilberto finally scared the donkey, chasing him up into the hills. Alicia and I could crossed a stream that led us to safety, away from the donkey.

Our climb to the top of Windy Hill was beautiful and serene. As we continued to ride, the sun sank deeper and deeper in the sky, making the colors of the surrounding rolling hills change. At the top of Windy Hill, I could feel the energy of the area that Alicia described. Granted, a big storm was rolling in and the wind had picked up quite a bit, but the surrounding area was dramatic and beautiful. The building on the hill in the distance is home to a Buddhist monastery. Alicia said that the monks chose to settle on that hilltop a few years ago because of the strong, good energy that they felt there.

We got back to the ranch and let our horses loose for the night before the rain started. We all took showers and settled down on the couch to try a homemade liquor made of Feijoa Sellowiana, a fruit grown in Uruguay. The neat thing about Uruguay and visiting these estancias is that so many things that I have tasted are homemade, from wine to jams to pastries. It is quite amazing. 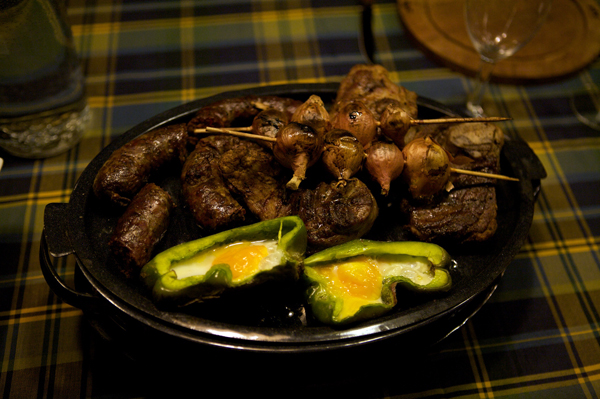 Dinner consisted of a variety of lamb, chorizo and grilled pork, seasoned and charred on the giant asado (grill), along with tomatoes and onions. We also had Uruguayan wine. Everything tasted so fresh and good. Daniel explained that the beef that we were feasting on was actually pretty healthy beef, because the cows are grass fed and therefore more lean. As I heaped another helping of beef on my plate, I was encouraged by this information.

Alicia explained that many people in Uruguay don’t consider a meal “a meal” unless there is beef on the menu. Some other funny things that she told me was that in Uruguay, you don’t call elderly people “old people,” you call them “big people.” How funny! I would learn a lot more in the days to come and have more adventures exploring with Alicia at La Salamora and beyond.

How you can go: La Salamora is an Estancia Turistica (Ranch) in Lavalleja, Uruguay.