Versatile, intelligent, and even-tempered, the American Quarter Horse is one of the world's most beloved breeds and a symbol of the American West. Globetrotting equestrian, Janine Whyte, travels to Africa to learn how a new breed, the Hardy Quarter Horse, is bringing a little bit of the Wild West to Southern Namibia

Photos and text by Janine Whyte. 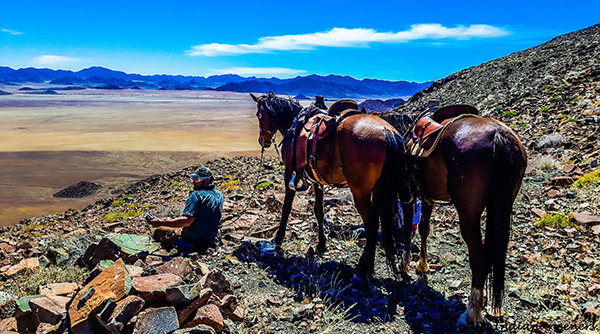 Ranch Koiimasis, where the mountains meet the Namib Desert.

When I think of cattle stations and ranches I immediately conjure up images of Stetson donned cowboys in checked shirts and leather chaps, galloping across the plains to the thundering beat of hooves, pushing cattle in a haze of dust, sweat, and grime--with lassos at the ready to rein in any beast that wanders too far from the pack.

The American cowboy created a style and reputation all of their own. Their lifestyle is iconic and glamorized in countless books, movies, and television shows……but the rough, remote, grueling and lonely work of a cowboy was not for the faint-hearted. They needed a trusty and stalwart companion, a horse whose history is uniquely tied with that of the land they roam. Enter the distinctive silhouette of the American Quarter Horse.

Although “cowboys” originated in Mexico, they played an incredibly important role during the westward expansion of the United States of America.  In the 19th century, adventuring pioneers were in desperate need of hardy, tough, and willing horses--thus the story begins. They began crossing wild mustangs and Spanish stock from the Conquistadors with the horses that belonged to the colonizers. The result was a horse that appeared to have an innate “cow sense,” making it popular with the cattlemen.

The main duty of a ranch horse in the American West was working cattle. Even after the invention of automobiles, horses were still irreplaceable for handling livestock on the range-- the many tracks, paths, and mountain passes being inaccessible to four wheels has proven time and again the priceless value of the versatile Quarter Horse. Honoring their incredible work ethic and invaluable existence to the United States cattle industry, it was the major Texas ranches that played a significant role in the development of the modern-day American Quarter Horse.

Working cattle is not an easy task for any horse, they must be calm and strong, fast but not hot-tempered, sure-footed and agile. The American Quarter Horse combines all these qualities and more in a unique combination of speed and strength. Defined by a heavily muscled body, powerful shoulders and hindquarters, and strong sturdy legs, they are perfectly proportioned to work cattle. With a calm and docile temperament and gentle and steady demeanor, this breed remains calm under pressure and has the perfect personality for the stressful demands of cattle work.

Crossing oceans and continents, the American Quarter Horse's legacy and influence has spread far and wide and can be found in the most seemingly unlikely of places. Nestled deep in the heart of the Tiras Mountains of Southern Namibia, Ranch Koiimasis sprawls across 40,000 hectares of extremely diverse terrain. Rich red granite boulders and majestic craggy mountains plunge gracefully to the fringes of the sands of the Namib Desert--a veritable nature lover's paradise that does not look too from scenes of popular western movies. It is here on this intensive ranching operation that you will find herds of Hardy Quarter Horses roaming free and working cattle. 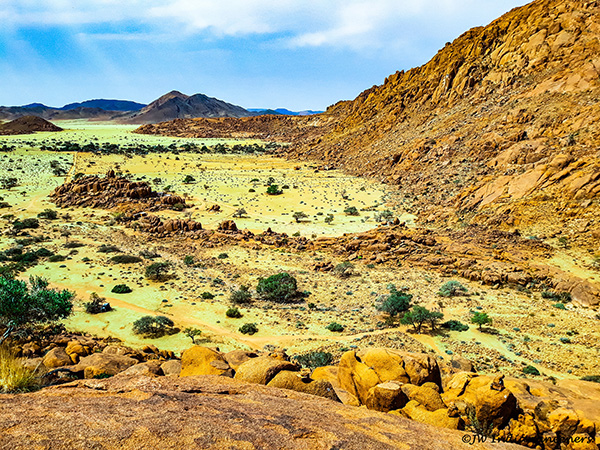 Ranch Koiimasis is nestled amongst the Tiras Mountains, the Wild West of Southern Africa.

This part of Southern Africa has no native horse population and the true story of how horses came to be in this part of the world may never be known. However, there are a number of theories, the most likely being that their origins are linked to escaped and released South African Military Horses and Namibian Bred German Horses that were used in military campaigns during World War I. Wild and free, these horses had to adapt to life in a harsh environment of searing heat and barren land--where drought is common and one constantly prays for rain. Survival became the main impetus and, perhaps, a reversion to more primitive and natural instincts than their domesticated counterparts, made these horses strong and hardy, aiding their continuity. Often called “ghost horses,” they ran from the sight of humans, fleeing anything sensed as a predator, virtually unreachable and untrainable. 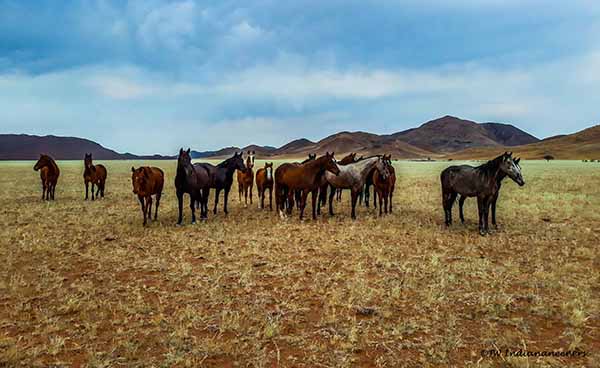 In the beginning, these were the only horses that Wulff Izko, owner and proprietor of Ranch Koiimasis had. Born and nurtured in the rugged surroundings of the ranch made these horses ideal physically for the terrain on which they were to work. However, that survival instinct and intense wild streak made it very difficult to put miles on their backs despite the attempts of many different training methods and the invitation of some of the finest cowboys to work their magic. It was Wulff’s intense passion and relentless pursuit of his dream to create the concept of the “Wild West” Ranch in Namibia. That led him to the idea of cross-breeding the wild horse--the idea being to preserve their natural instincts, toughness, and tenacity but to dilute the wildness with a calmer, cooler temperament that would accept training and enable them to work cattle proficiently.

Firstly, he tried introducing some Arabian blood, another breed used to the vengeful will of the desert climes, with the added characteristics of being incredibly smart, intelligent, diligent and loyal but, the result was a horse that unfortunately proved too hot of a temperament to work in a cool and calm manner with the cattle. After acres of intense research, Wulff found the ideal solution to ensure his dream became a reality. Looking West, he found the famed American Quarter Horse--the answer to his prayers. Without a moment's hesitation the first Quarter Horse Stallion, Jabaroan, was bought and a breeding program introduced to build a generation of Hardy Mountain Quarter Horses which is still being fine-tuned and in operation today some fifteen years later. 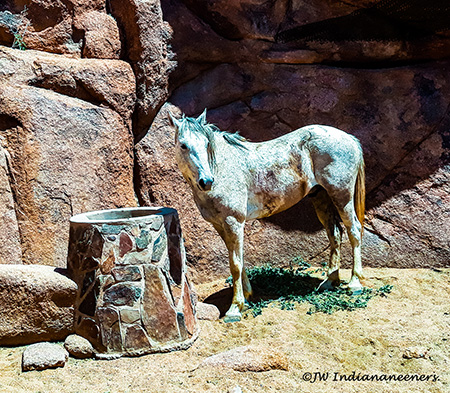 During my three week stint at Ranch Koiimasis, I had the opportunity to sample a wide variety of this new breed of Quarter Horse, ranging from the first generation who had only about twenty-five percent of Quarter Horse blood to the third generation that comprised almost seventy-five percent Quarter Horse. From cantering across the wide open plains of the ranch to scaling some extreme rocky mountain passes, rounding up cattle and loose horses to checking fences and water points--these horses proved versatile and hardy, retaining a large portion of their intrinsic and instinctive survival herd mentality teamed with the steadfast calm work ethic of the Quarter Horse blood that now courses through their veins. 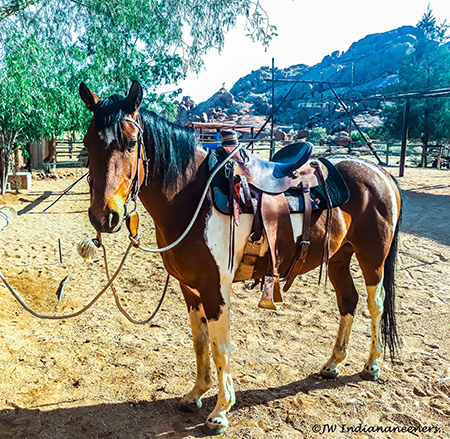 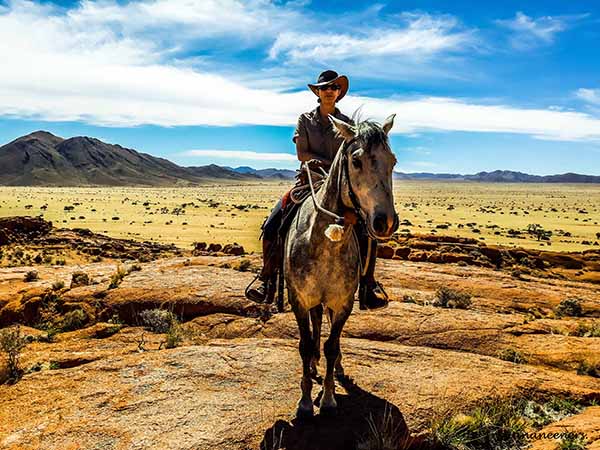 Ranch Koiimasis offers the adventure of living on a working ranch in the wild African bush where oryx, springbok, ostrich and mountain zebra roam and frolic alongside the more familiar sight of cattle, where the magnificent craggy peaks of the Tiras Mountains seamlessly touch the sky, where the oldest desert in the world is on your doorstep, and where you can experience the rare blend of wild and free with calm and docile atop your unique Hardy Quarter Horse. 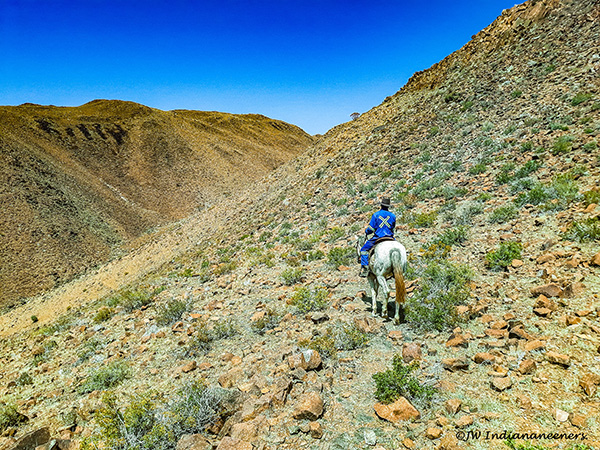 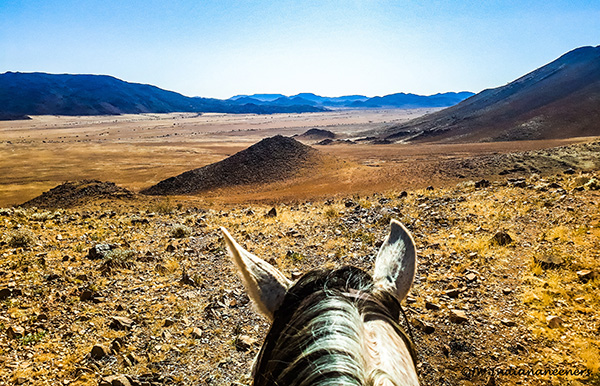 About the Author: Janine Whyte (Globetrotting Cowgirl), first got bitten by the travel bug in 2007 while backpacking around the world on a sabbatical from work. In 2009, she stumbled across the world of equitourism and discovered that she could combine her two greatest passions in life--horses and travel. Since her first horseback safari in Botswana in May 2009, Janine has traveled off the beaten track and on four hooves in over 20 countries enjoying many adventures, such as traversing the mighty Andes mountain range and crossing the oldest desert in the world. You can read more about her travels and follow her adventures on her blog. Connect with her on Facebook and Instagram.