The horse is an integral part of the Icelandic nation. They came to Iceland with the Vikings around 900 AD. It is thought that they were descendents of the Mongolian ponies that were imported to Scandinavia.

The story of the settling of the island is found in Landnamabok, the “Book of Settlements,” which is a nearly factual account of what transpired. Rather than sailing the dragon ships usually associated with Vikings, the settlers came in deep-keeled knars. On such a ship, their horses had to compete for space with other animals such as sheep and cattle, as well as timber for building, grain for the stock, weapons, tools and household goods.

Since the Viking settlers were petty chieftains and land farmers, they brought only the best of their stallions and mares to the new land. Icelanders say that the Icelandic horse was the catalyst that allowed the settlement of the island. In fact, the horse is so ingrained in the culture and heritage of Iceland that it is known throughout the land as man’s “most useful servant.”


Today’s Icelandic horses are descendents of those early herds. Stories of the Icelandic horse are intertwined in Norse mythology, appearing in the sagas, songs and art. The sagas tell of courageous horses that played a vital role in Viking warfare. A good horse was a warrior’s prized possession, and great horses were treated with respect, often being buried alongside the slain hero.

The most famous horse was Sleipnir, an eight-legged steed ridden by the supreme god Odin. Another, Gullfaxi was ridden by Hrungnir, king of the Giants. For centuries, the Icelandic horse was indispensable to the society. Used to herd sheep, plow fields, and as the only source of transportation, the horse was vital to the farmer’s income. As such, they were highly valued and formed strong bonds with their families.

With the dawning of the industrial age, the Icelandic horse became a source of recreation and fun, rather than a beast of burden. However, horse enthusiasts continued breeding horses and formed the first breeding association in 1904, the same year the automobile arrived in Iceland. Today the primary work role of the Icelandic horse is during the annual round-ups where farmers use horses to gather sheep and bring them from summer pastures in the highlands. 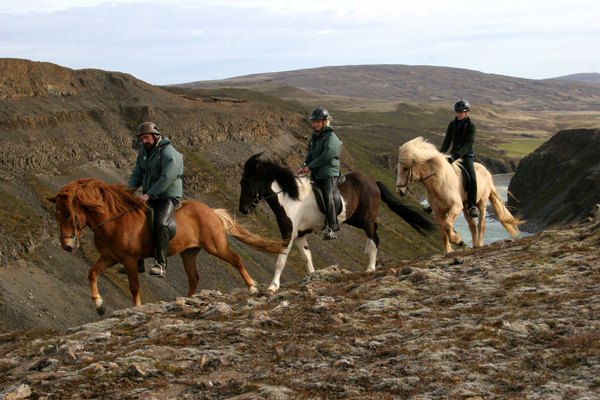 One of the most fascinating features of the Icelandic horse is its extreme genetic purity. Of the nearly 80,000 horses in Iceland today, all were born on the island. Because Iceland is so geographically isolated, the horses have remained virtually disease free. They have been spared the ailments that plague other horse populations in the United States and Europe. The old Althing parliament passed laws prohibiting the importation of foreign horses and other livestock. The law is still in effect, and has been expanded to forbid the importation of riding gear, tack and riding apparel.

There are about 100,000 Icelandic horses abroad, mostly in Europe. A growing number are in the United States and Canada. The largest number reside in Germany (nearly 50,000). The increasing popularity of Icelandic horses had made horse breeding and exploration a lucrative business venture in many areas of Iceland, boosting agriculture and economic development.

The Icelandic horse has a very individual character—friendly, intelligent, good tempered, patient, versatile and durable—the ideal family horse. Since there are no natural predators, the Icelandic horse has lost its “flight or fight” instinct, and has little tendency to kick or behave badly. Horses that have bad dispositions are culled.

The Icelandic horse’s height ranges between 12.3 and 14.3 hands with the average being 13.2 hands. Another breeding goal is to produce a perfect five-gaited horse, one that can walk, trot, canter/gallop and execute the magical tolt and flying pace. Icelandic horses are expected to perform each gait when asked with specific definition. A good tolter can travel as fast as 20 mph while the rider sits virtually bounce free. At this gait, it is possible to carry a glass full of liquid without spilling a drop.

The crown jewel of Icelandic horsemanship is the flying pace, and riders often reach 35 mph at this gait. Although the goal is to breed for the perfect five-gaited horse, some Icelandics have four gaits, not achieving the flying pace. These horses are no less prized by their owners.

Judie Framan is an equestrian journalist, horsewoman and environmentalist. Over the years, she has ridden Irish horses for pleasure and cross country jumping in Tipperary County, Ireland. She and her husband, photographer Elliot Framan own Halcyon Acres, and are dedicated to breeding, raising and importing Irish Draught and Irish Draught Sport Horses. She frequently takes riding vacations.