Horse Trekking in the Wadi Rum in Jordan

Riding Arabian horses with the Bedouin in Jordan was one of the most amazing adventures of my life!

As my horse Chams began to inch forward past my Bedouin guide Atallah on his well-trained racing mount, my heart beat so quickly that I could hardly breathe. I pulled the reins back and sat deep in the saddle, cueing Chams to slow down. Chams listened at first, but then plunged forward ahead of Atallah. I could tell that instinct was kicking in and that these Arabian steeds were in racing mode.

I held tight, nervous and giddy as I led four Bedouins towards an area of rocky sand, where we'd be forced to slow down because of the footing. Out of breath and sweaty, we slowed to a walk in an area where large red sandstone cliffs rose up on either side, providing some shade. I looked over at Atallah, whose kind face beamed with a toothy smile. A world-class endurance rider, my Jordanian guide was in his element. I hoped that by the end of my time riding with Atallah in the Wadi Rum Desert in Jordan, I'd be there too.

I jolted back to reality by a crackling sound coming from my pocket. For a few moments, those of admittedly sheer terror, I had forgotten that we were filming this trek. High above and far away, atop a large cliff, our small, but mighty film crew was trying to reach me over the walkie talkie that I carry for instances like this, when we are filming those beautiful far away shots of riders heading off to the sunset. The camera starts out high and wide and you can barely see us galloping in the distance. Then suddenly, there’s the zoom, as the viewers is taken quickly closer to view the of pure freedom of riding fast.

“Um, could you do that again?” It was Greg, our director of photography, who was recently awarded a second Daytime Emmy for shooting Equitrekking, the travel series I host and produce. Considering the fact that for the past few years, we’ve been on the road for over 15 weeks together, we have to get along well, and Greg and I get along like too peas in a pod. We often say we’re like Billy Crystal and Meg Ryan in the movie “When Harry Met Sally.” That is… when they were just friends. We share the same peculiar culinary tastes, opting for a dry sandwich if mayonnaise is the only option, and can usually guess what each will order off of a given menu. We require food immediately upon rising each morning and quietly trade granola bars in situations where a local host serves us something that we have to eat, but don’t really enjoy. 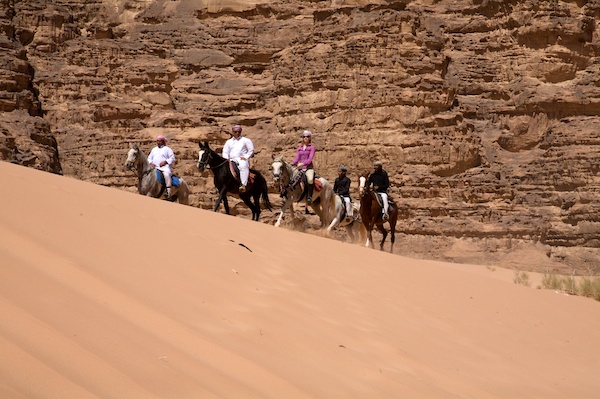 Greg constantly reminds me of his talents as he rides with an HD camera in hand and shoots things like the wild horse festival in Costa Rica, where cars mixed with riders and many a local had imbibed too much alcohol to command reins or steering wheels, or sliding down the volcanic sands into Haleaakala Crater on Maui. I’m always happy when I look at the footage in the edit room, because it’s great. Greg is a perfectionist. I’m not always happy during those challenging moments when I’m say herding sharp horned bison with cowboys in Utah, climbing towards stormy skies up a mountain in the Canadian Rockies or racing through the sandy expanses on a hot blooded Arabian in the Middle East and Greg asks me to do it again. Alas, as long as my horse and fellow riders are up for it, I’m usually good for another go. My race through the desert would be no exception. 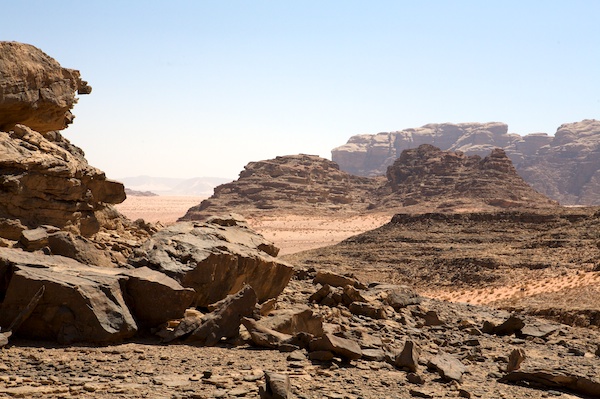 The Wadi Rum Desert in Jordan is called ‘The Valley of the Moon’. Having ridden the lunar landscapes of Iceland as well as the dramatic landscapes of America’s Southwest, I found the Wadi Rum to be a mix of the two. It’s much more diverse than the moon with its variety of pink, red and white sandstone formations, which are striated with lines of black, pockmarked with crevices and decorated with 2500 year-old petroglyphs.

The desert is stunning with surprisingly diverse scenery. There are areas of rocky sand mixed with large dunes, prickly green shrubs and imposing mountain monuments rising up to bright blue, cloudless skies. Dramatic… beautiful… and I wouldn’t want to ride there without a guide, as weaving through those canyons, I would certainly get lost. You might want to get lost, as the desert is magical, but not during the midday heat! I quickly learned from my Bedouin guide to always be on the lookout for shade. 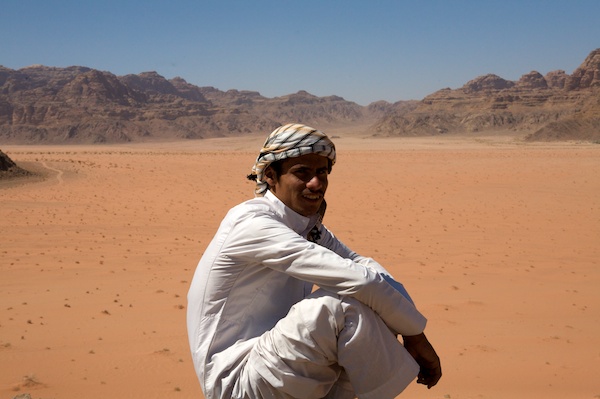 Many people know of the Wadi Rum from the 1962 epic film Lawrence of Arabia, much of which was filmed in the desert. I did sort of feel like Lawrence as my guide, Atallah, pointed out The Seven Pillars of Wisdom rock formation in the distance. It was named because of the book written by British officer T. E. Lawrence, who was based in Wadi Rum during the Arab Revolt of 1917–18. As we traveled further from civilization, my Arabian horse’s hooves sunk into the sand and I really appreciated being on horseback for my trek. If you’ve ever walked on the beach, you know that it can require greater effort. It’s the same for maneuvering through the desert. I was looking forward to covering a lot of ground and horseback riding seemed the best way to do it.

Atallah leads riders on tours of the desert on his well-built Arabian horses. He grew up in the Wadi Rum and knows the land instinctively. His horses do too and are conditioned to conquer the desert extremes. There are only certain places where the sand allows for faster riding, so when we could, we took advantage. 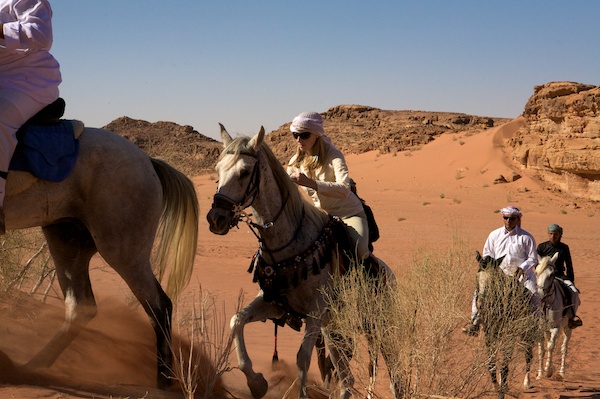 I ride horses all over the world, but I was a little nervous to ride Arabians in the vast, open desert. As a breed, Arabians are known to be more spirited. They have been bred for endurance and speed. It's the Bedouin who are thought to be some of the original breeders of Arabians. As a traveler coming into the desert ride and camp for a few days, the thought of riding these horses with their Bedouin owners, both of whom have survived here for generations, is exciting and daunting. Atallah’s horses certainly were spirited, but they also listened, giving me confidence in the sand.

In the extreme heat and sun, I covered my head with a scarf. There are many different ways to tie a headscarf. At first, I thought that having this scarf wrapped around my head would make me even warmer, but by the end of each day, I was happy to have it on. Even though I was there at the end of September, a cooler time to ride in Jordan’s deserts, temperatures can still soar. We would rise early to ride in the cool of the morning and break for many hours during the midday heat, finding refuge under the shade of a canyon. The Bedouin are masters at finding shade. Whenever we had the chance, we would make for a canyon to ride among the shadows for our benefit and for our horses. 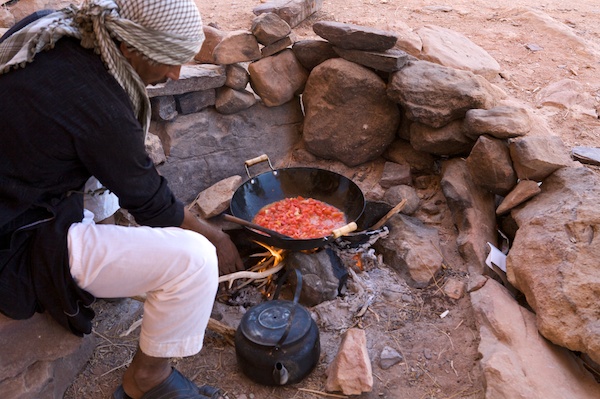 At lunch, my Bedouin friends would lay out mats on the sand, light a fire and cook simple but delicious meals, followed by piping hot chai, tea with various herbs and spices. For lunch on our first day, Ibrahim sliced tomatoes, onions and garlic and sautéed it with beans, oil and a multitude of spices. It may sound elementary, but it tasted wonderful. We ate without silverware, using small pieces of pita bread as spoons. The tomato concoction, called bazelleh, was zesty and filling. I savored it, along with the water and hot chai. Then, everyone lay down and slept until it was cool enough to ride again.

I’m not one for napping, but as I sat with my boots off in the shade and quiet of the desert, starring at the horses grazing and feeling drowsy and full, I dozed off for a few minutes. When I arose, I saw a string of camels in front of me, crossing the desert like a mirage in the distance. I got up quickly and wondered for a moment if I should wake Greg, when I saw that he was already grabbing his sand filled tripod and heading off for a closer shot. Camels are also a good way to trek the desert, and one that I’d experience later in the trip. Their broad, padded feet don’t sink into the sand, but spread out like fans, making sand trekking less strenuous.

As we continued our ride into Lawrence Canyon one afternoon after lunch, I was astounded by the abundance of life in the desert. There was a lot more greenery than I imagined. The Bedouin use these desert plants to their advantage. Atallah pointed out a bush that he crushes and lathers into a natural soap, a sort of desert Purell. We passed prickly Haloxylon shrubs, which have deep roots that help hold the desert sand in place.

I saw lizards scurry across my path, leaving delicate prints alongside the tracks of Ibex, a wild goat with distinctive ridged horns. The Sinai Rosefinch, Jordan’s national bird, chirped in a secluded section of a canyon, where it was searching for small pools of water. I sat on Chams, quietly listening and watching as the small sparrow-sized bird revealed its bright pink chest. That’s the beauty of traveling on horseback in the Wadi Rum. You are able to unobtrusively watch the natural world and hopefully, blend in with the natives.