Riding the tropical, jungle-covered mountainsides to a secluded waterfall in Costa Rica.

Most Americans think of Costa Rica as a tropical getaway; a place, to fish, sail and surf. It’s touted as a Central American paradise with miles of coastal beaches and crystalline waters, as well as jungle forests filled with sports opportunities like zip-lining through the canopy, kayaking, and white water rafting. Costa Rica is also filled with numerous national parks that protect wildlife, giving visitors a chance to experience the special biodiversity of the country. All kinds of reptiles, including crocodiles and caimans, plus mammals like sloths, cougars and javelinas abound. Look up and see tree dwelling monkeys, plus a huge variety of exotic birds. For nature lovers, it’s a dream come true. 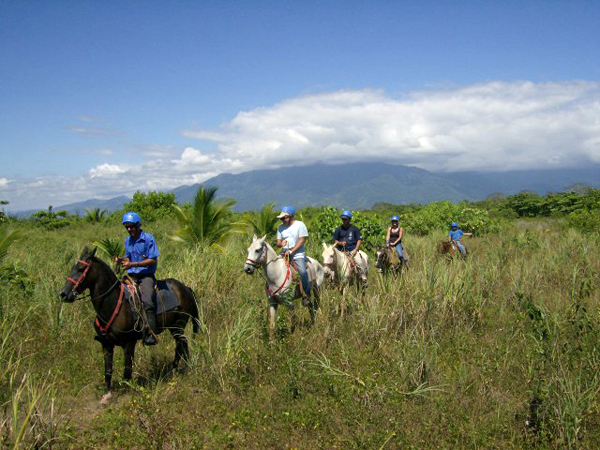 But Costa Rica’s rich agricultural traditions and farm lands are also home to a horse culture that is as old as the country itself. Costa Ricans love to ride and raise horses of many kinds, for work and pleasure, using horsemanship traditions descended from the Spanish who brought horses with them in the 16th century. Various horse breeds today vary from the famed South American Paso Fino to the locally raised and bred Costa Rican Saddle horse, a gaited breed as well. 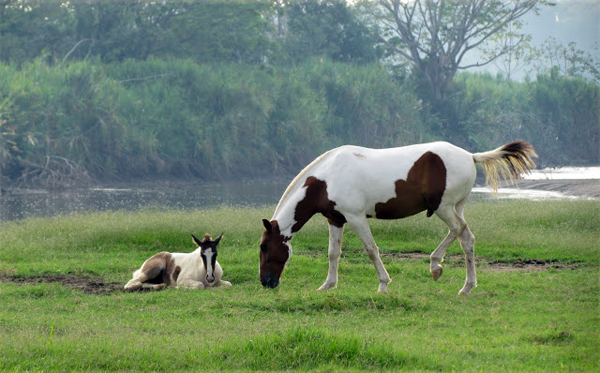 A recent vacation to this beautiful country gave this rider a chance to sample something both unexpected and new in a horseback ride. As a former one-time wrangler who led tourists on horseback though aspen forests in Colorado’s Rockies, I am familiar with horse trekking. The tropical jungle-covered mountainsides of Costa Rica offered different challenges entirely–– heat, snakes and insects were just the start.

My husband and I were game for anything when Pacific Trade Winds, a travel agent that promotes Costa Rica, suggested the horseback trek to the Tocori Mountain Waterfall arranged by Iguana Tours, a business in Quepos, an area not far from Manuel Antonio on the Pacific coast. 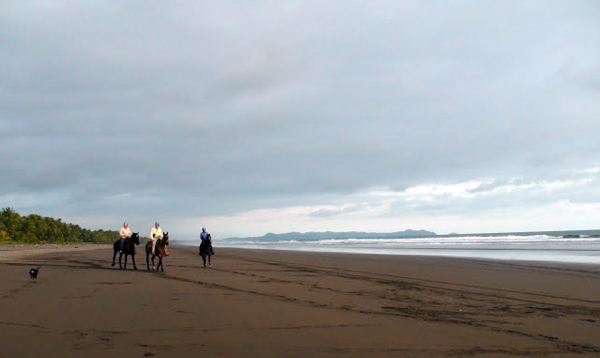 Manuel Antonio is both a seaside resort and home to one of the country’s most ecologically diverse national parks. Sea sports abound here, as well as guided jungle tours, which prove what most tourists don’t realize at first glance; jungle animals rely on camouflage to stay safe, so it takes careful looking and listening to encounter the various species that make the visit so exciting. The one exception to the camouflage rule were the many different kinds of monkeys cavorting high above through the trees, chattering or howling at the intruders below. The expert guided jungle tour made our appointment to ride the following day all the more intriguing. 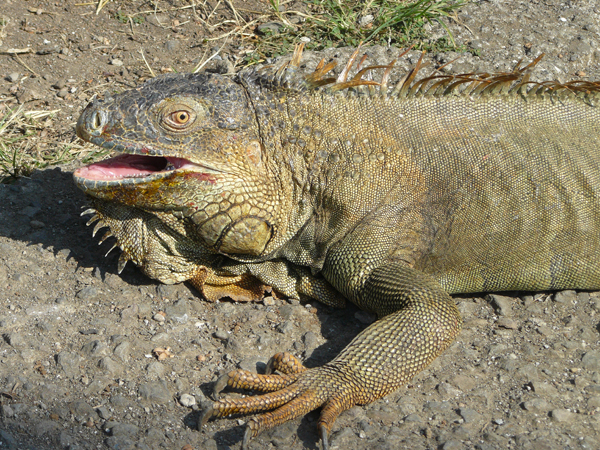 By one in the afternoon, the weather had heated up to hot and humid; it was easily in the mid-80s. We were picked up by our driver, who already had a quartet of young travelers from South Africa and Australia on board. They were anxious for their first Costa Rican adventure. A 45-minute drive gave us time to get to know our wrangler, Dyala Gomez, who was also the driver, tour guide, and a consummate horsewoman. Her father is a businessman devoted to tourism, and also a rancher and competitive horseman. Undoubtedly, his English-speaking daughter was among his most valuable employees.

The van drove through rural towns and dusty roads until it hit a remote gravel path where a string of saddled horses stood tethered to a fence, awaiting our arrival under the shade of tall leafy trees. A Spanish speaking trail hand stood nearby, ready to assist us in the match-up of horse to rider and securing of safety helmets. 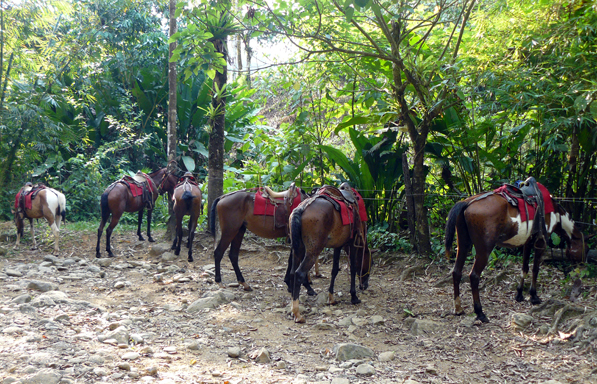 At first glance, the animals seemed unsuitable for their job. They seemed too small; wiry and slim, narrow-chested and long necked, with short legs and small hooves. They were all chestnut or dark brown, uniform in color. One might think of the Spanish Barbs centuries before that came over on Spanish ships, ancestors of our own mustangs.

On closer look however, their brown flat coats shone under their saddle blankets and McClellan-type saddles, revealing well-muscled flanks and shoulders. Their feet were neatly shod, a necessary protection against the rocky climb they traveled almost every day. They seemed relaxed and benign; unaffected by the bevy of strangers. On their heads they wore handmade bosals or hackamores instead of bridles with bits, and all seemed healthy and friendly. Most of all, they looked well-cared for and sound.

Within minutes, each one of us was matched to an animal the right size and temperament. Swim gear and towels were packed into saddle bags already filled with water bottles and snacks, soon to be shared once we reached our destination. With little discussion, Dyala led us up the gravel path, across a paved roadway, and into the mountain foliage, following what appeared to be an access road crowded by thick jungle vegetation. Many of the trees there bore air ferns or epiphytes on their branches, rootless vegetation that feeds off dust and nutrients that gather where they establish themselves; almost like trees on top of trees! Giant curling ferns and other broad leafed flowering plants created a profusion of greenery. 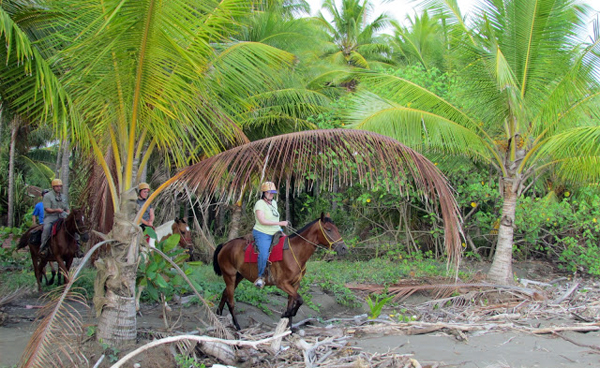 The horses were used to staying close, so no one had much trouble moving forward. Skill levels in our group ranged from first time riders to expert, but it mattered little. The pace allowed for us to stay together and if anyone fell behind, the group waited until we were bunched again. All around, the jungle fairly blocked the view as we climbed slowly upward. When the view opened up to clear, the expanse of lush sloping mountainside falling away below us was breathtaking. Here and there, black Howler monkeys swung across the treetops like acrobats, adding loud calls and surprise to every twist and turn. 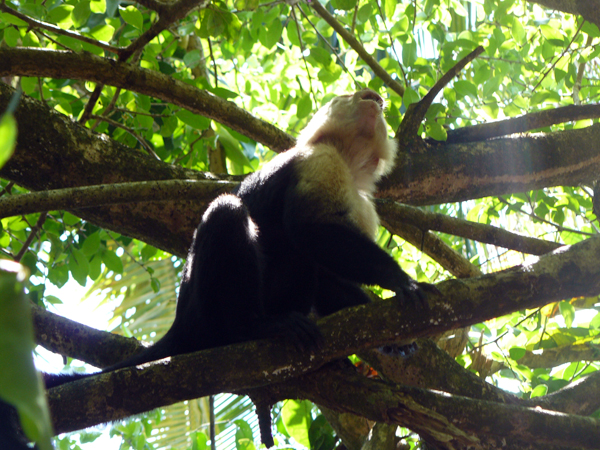 Human life occupies these mountainsides as well, and occasionally, an entire family would rumble by in an open back truck, waving as they went. Our goal was to reach an ancient water pool fed by a many-tiered waterfall. Near the destination, we followed a shallow river through its sandy beds, stopping to let the horses drink, then came to a halt in what Dyala referred to as the “parking lot”—a shady clearing where the animals came to rest and then were tethered to a rail. Dyala pulled out water bottles and cookies as refreshments for anyone who wanted them.

From there we passed by foot through a locked gate, then climbed up a trail carved into the mountain, marked by rock steps. This access once belonged to the Quepos Indians, who made the area a sacred place. The five-minute climb brought us to the lip of the pool, an extremely cold basin wide enough to hold twenty people at once and deep enough to cover your hips. Those who wore swimsuits peeled down quickly. Those who needed to change, like myself, sought some privacy behind nearby trees. (I failed to notice the large ant colony I was standing in as I pulled off my shoes, but I remembered it clearly for the rest of the trip.) 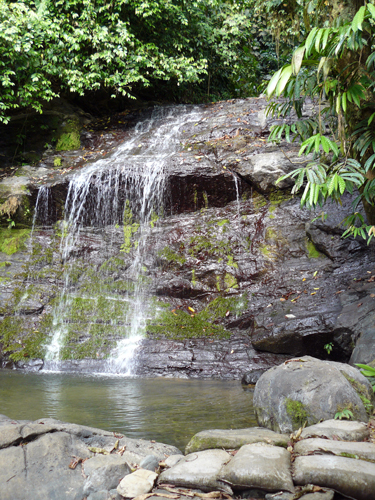 The refreshing dip in the pool lasted a mere 20 minutes. While telling us about the history, Dyala pulled a leaf off of a plant that emitted the smell of camphor, one of 900 varieties of flora and fauna in Costa Rica that hold secrets to health and wellness. Rubbing it produced a distinct scent, a hint at its curative properties. 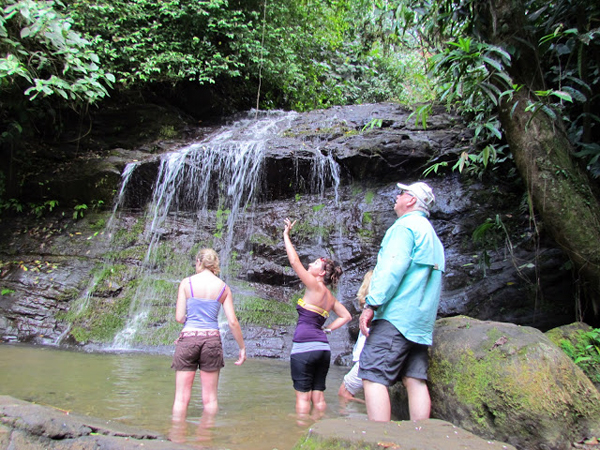 Too soon dried off and dressed again, our group made its way down and back to our waiting mounts, still cooling off the in the shade. Helmets in place, we retraced our steps, a full hour ride back down the mountain to civilization once again.

Back at the starting point, the wrangler who met us at the start took each horse as we dismounted. To my surprise, he removed their bosals and slung them over his shoulder, leaving just the saddles on. Then, mounting the last horse, he turned its head toward home, the ranch called Rancho Don Gilberto, some 20 minutes away. His small remuda already knew the drill and started moving forward without him. He wouldn’t have to do much as he jingled them on; all the horses at liberty, running freely to pasture, good grass hay, and much needed rest. I wish I’d had a video camera. It was quite an extraordinary sight.

On the way back to Manuel Antonio, my husband and I were treated to a homemade dinner at the home of Dyala’s parents, an unexpected and totally fabulous treat. (The voucher just said “dinner included.”) It was part of our reservation package and made the whole afternoon more than unforgettable. The meal consisted of the national dish: freshly cooked rice, black beans, squash, roasted chicken and plantains, and gallons of lightly sweetened pineapple juice and water. Nothing could have hit the spot more. 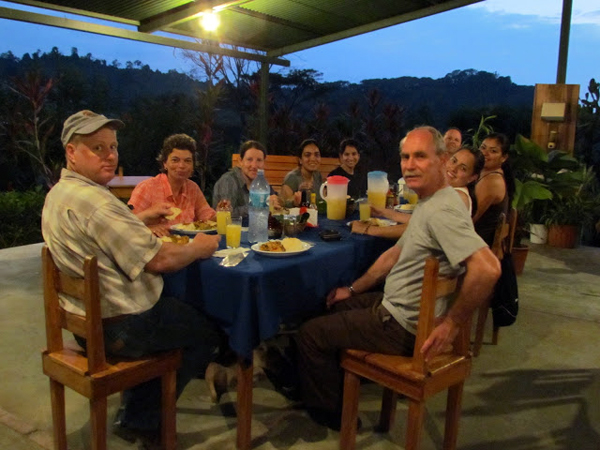 If you’re planning a trip to Costa Rica, Iguana Tours can offer you a beach ride on the coast or the jungle tour we took. Pacific Trade Winds can direct you anywhere in the country. I recommend the waterfall— it, and those little horses, I discovered, are unforgettable.

About the Author: Corinne Joy Brown is the author of four books and the President of the Denver Woman's Press Club in Denver, Colorado. A former horse owner who once rode the Colorado Trail (100 miles in four days), she loves distance riding on horseback. She's a senior writer at Working Ranch magazine and Persmimon Hill, the publication of the National Cowboy and Western Heritage Museum, and freelances in the fields of Western culture, design and architecture. For more info go to: www.corinnejoybrown.com