Endurance Riding by Moonlight in Vermont

Horses and runners take on Vermont trails during an endurance race and run by moonlight.

What does all this mean? On a weekend in mid-July every year, 400 runners, and 70 horses (83 this year!) descend on a group of hayfields in West Windsor for a fun and challenging weekend. The proceeds of all entry fees benefit Vermont Adaptive Ski and Sport. Countless volunteers and landowners make the entire weekend possible. 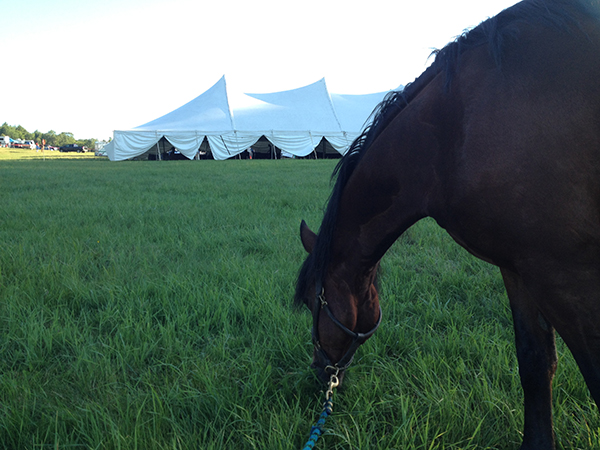 Hanging out after vetting.

I arrived on Friday, July 20th and vetted my Morgan gelding, Kerry Killarney (barn name John) in. The 50-mile ride wasn’t starting until 2 PM on Saturday, July 21st, so I took my time setting up camp and getting settled in. Camp has an electric feel with all of the people and activity. I may have referred to it as a circus, I may not have been the only one who did that, but boy, it was a fun circus!

Loud announcements started bellowing through camp somewhere around 3:30 AM on Saturday. I crawled out of my sleeping bag at 3:40 and went and stood in John’s paddock. The minutes slowly dragged by as the buzz of voices and announcements coming from runner camp up the hill got louder. Finally it was the countdown, 10, 9, 8…. and they were off. We heard the footsteps before we saw them, and then they started running down the road in front of us, the bob of their headlamps visible in the dark night sky. At first John didn’t care, but about one third of the way in, he thought maybe there was something really wrong if all of these people were running away from camp. I kept petting him and then they were gone and ride camp was quiet again. The 100-mile horses went out at 5 AM and this time I crawled back out of my sleeping bag. He wasn’t really worried. 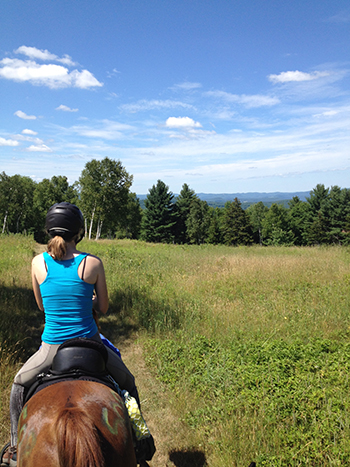 Sara rides down the trail.

The morning dragged on as we waited for our ride time. Finally we were saddled up and ready. I waited until they yelled “Trails open!” to mount up, and headed out with a good distance between the faster horses and us. John got excited and moved out down the road until we were on the trails and climbing up the side of the mountain in the woods. The 100-mile run claims that there is 17,000 feet of vertical. I don’t know how much vertical the 50-mile ride has, but it felt as if we were always climbing up or down.

We went slowly on the first loop, a 15-miler, because it was hot and hilly. I ended up riding with a girl named Sara who was also camped next to me for part of the loop. Sara saw a bear scurry across the trail at one point, but I didn’t notice it and John was completely oblivious. We were descending off one of the fields at the top and moments before I was thinking how wonderful it all smelled and that it was a prime bear area.

John and I made it back about 10 minutes before the cutoff time for the stop and go vet check at ride camp. Wanda Staczik gave him more electrolytes and we let him eat, then I headed back out. Wanda is from East Lyme, Connecticut and volunteered to crew for me at the last minute when my brother had to stay home on our dairy farm, I couldn’t have completed the ride without her! Her husband Ron and daughter Amanda were crewing for a rider in the 100-mile ride.

I caught up with fellow 50-mile riders Kyle and Maria and rode most of the second loop with them. When we got close to the vet check, we all dismounted and made the last climb in on foot. Our horses walked into the vet check ready to pulse, but I didn’t envy the runners at all after that! 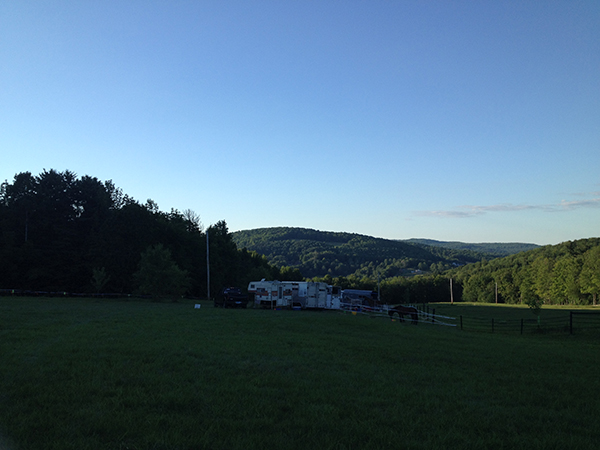 The view from our campsite.

John got loose at the first vet check – 21 miles in – he rolled – which I told Wanda he was allowed to do, and slipped his halter off rubbing his head. I was at the truck getting my reflective gear on and heard “Loose Horse!” and thought that has to be my horse. Sure enough, it was. He trotted up to one of the water tanks and Art King, DVM (who has vetted us countless times) walked right up to him and put a hand on his nose and held him until Wanda put the halter back on.

At the second vet check, at 36 miles, Nick Kohut, DVM saw me yawning and said, “No yawning! Get some caffeine into her, she has 12 more miles to go,” and laughed. I had checked in at 10:07 – so that was somewhere around 10:15 PM. Nick has also vetted us countless times and he and his wife Ranelle are huge supporters of our sport. 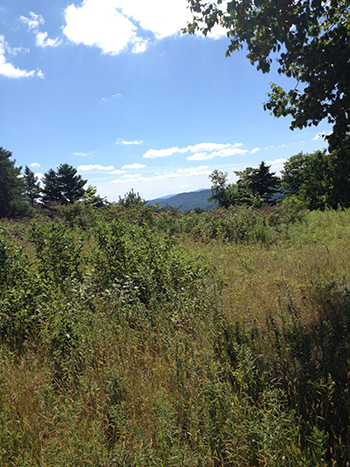 The view after the climb.

In the last 5 miles after the final crew pit stop the pain and tiredness dissipated. I was happy and enjoying the beautiful night, singing random verses of various songs, mostly with the word ride somewhere in them, to let any critters know we were out there. John’s ears were up the entire time, and we trotted some but mostly we just walked from glow stick to glow stick trail marker, and enjoyed riding through the night air. We rode with Kyle and Maria some, and shared the trail with the runners, who were also fighting exhaustion. 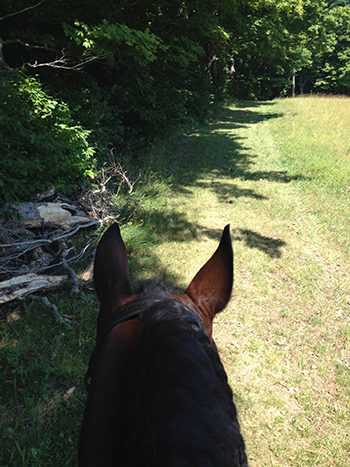 Between the ears and on the trails.

We pulsed out at 1:20 AM; I came in around 1:10 AM. Wanda, Ron and Amanda were all waiting for me and helped me untack and wipe John off. We threw his cooler on him and walked him over to the tent to vet out, and Joan Hilz, DVM completed his final exam. He had all A’s and a pulse of 48.

Deep in the heart of the night as exhaustion creeps in I wondered what I was doing out there and swore I would never do it again. But then my horse finished with all A’s, I got some sleep, and thought maybe that wasn’t so bad after all. I started making plans for next year.

About the Author: Stacey Stearns is a lifelong equestrian from Connecticut. She lives on Mountain Dairy in Mansfield, her family's dairy farm, and enjoys trail riding and endurance with her Morgan horses