A Standard Journey – Giving Up Everything to Help Horses in Need

Jackie Parry and her husband Noel rescued five horses from an unknown fate. They sold everything they had. Below is their story.

They said we couldn't do it. At times I certainly felt they were right. But were they right in the end?

We adopted five scatty Standardbred horses that could have been destined for who know's what. The ‘boys’ were quite lost; some had changed homes regularly, others treated with impatience. 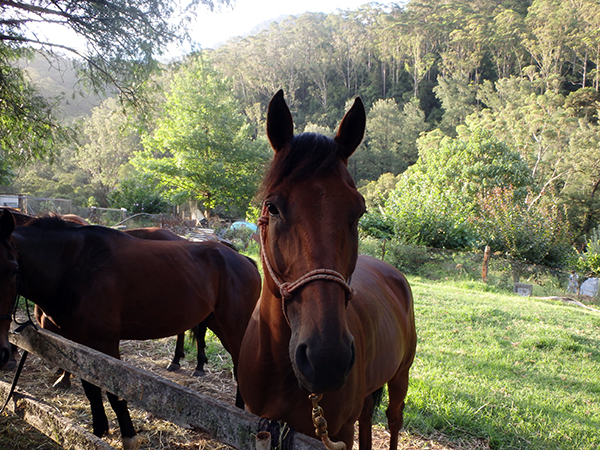 Noel and worked slowly and patiently with the five, extremely different and strong, characters to form a team. Those boys were clearly confused, wondering what lay ahead of them.

Ned and Charlie (unbroken) were terrified of everything, a rock, a leaf rolling in the wind and Kangaroos, well, they'd never seen one in their lives - Australian horses at that! Neddy-boy was constantly rigid with fear, having been handled with impatience. 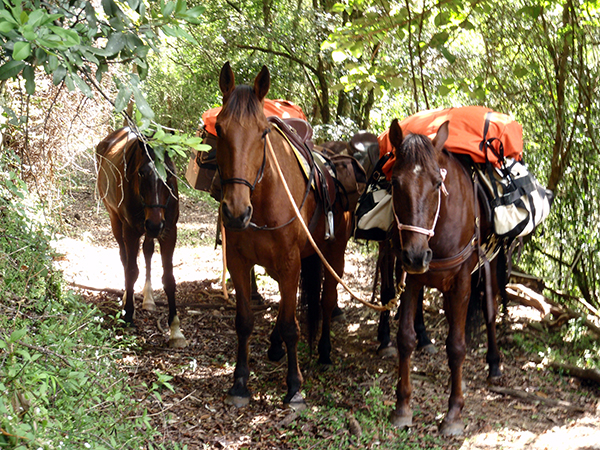 Dom in background – Charlie (middle) and Ned loaded up – very relaxed while we chip down a tree that is in the way.

Stevie was perplexed by another home change, at five he was so much older than his years - we hoped to give him some of his youth back. Spirit was quickly in a happy place with other horses, after being alone and hounded by some local drunks - but he was the boss, so he thought! Dommie (unbroken) had not yet suffered too much, an injury would stop him training to become a trotter, but wouldn't stop him trail riding - he surprised himself in his courage facing the trail riding challenges - being the baby at four.

They all changed - so completely, so miraculously, and in ways I could not have imagined. So did we.

Living in magnificent Kangaroo Valley, NSW, where the undulating 600 acres of our friends home would be our training ground - each day we worked at convincing the boys they were safe, they wouldn't be hurt, and - really - the creek was only four inches deep! 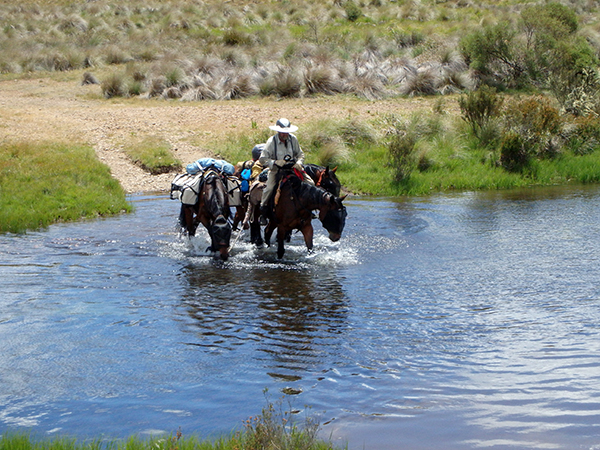 Charlie become the leader (we rode in headcollars/halters but he needed something to provide me with some leverage – he had a head the size of a suitcase and he knew how to use it!)

Crossing a shallow creek for the first time was a five hour marathon of exhaustion and sogginess. For some of the boys had not seen much of life outside a trotting ring. Fears were (eventually) overcome and, finally, success that would have all five horses bucking and leaping with the joy of their achievements. While Noel and I whispered a 'whoop whoop' laying in the grass, exhausted and dripping wet.

Alone in the bush, just the seven of us - we dealt with rescuing a drowning horse (which almost drowned me), a snapped leg... possibly..., choking horses (have you ever made a horse drink from a cup when there isn't a hose available?). The 'wrong' person suffered nasty falls, we endured comedy skits that were often painful in so many different ways. But the endurance of incredible loyalty, love, and miracle relationships that transported us all into an unknown realm of living, still makes my eyes sting today. 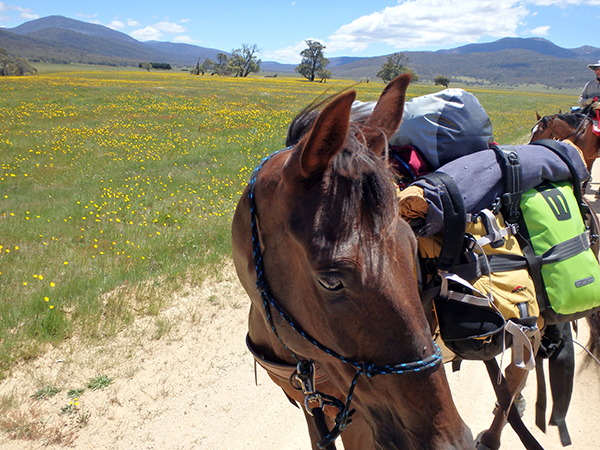 We were happy once we were off the roads.

But, did we succeed or did we fail?

A bit of both.

We succeeded, but not in the way we thought. Our gentle patience paid off, that was all they needed - remarkably, those boys understood that Noel and I needed the same gentle respect back from them. They thrived on that journey, they gained confidence, became leaders – learned that they had something to offer.

We didn't achieve all I wanted, so as I sit far away from 'my boys' planning our reunion, I am also quietly planning another foray into the bush. Even though that journey was one of the toughest things I've ever endured, it was also the most inspiring awakening I've experienced with horses or any animal - and it's not over yet! 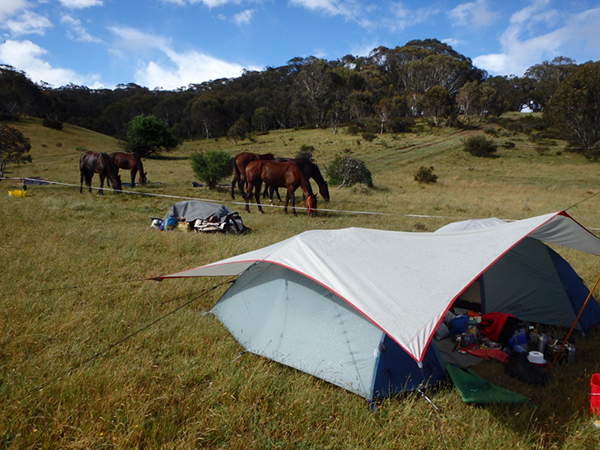 With our new set up – two single tents together, the boys gear under a tarp – and the boys relaxed with plenty to eat.

Excerpt from A Standard Journey – 5 horses, 2 people, and 1 tent:

All of a sudden we had a team of riding horses. At times we were like an orchestra, a symphony of leather squeaks and hoof falls, accompanied by the whispering breeze in the leaves, with the odd startled bird flapping into the air.

Noel and Stevie gelled superbly; they took care of each other. Stevie would glide forward into a sleek motion when carving a path through overgrown shrub, and Noel rode him beautifully, letting Stevie figure out the way. Spirit was content with being tied to Stevie’s saddle and followed along merrily. I was handling Charlie and Ned, as they needed the most work. Dom was left to follow freely at this point.

We had our favourite riding horses but swapped them around. We thought it was important to train all five boys to be able to do everything. 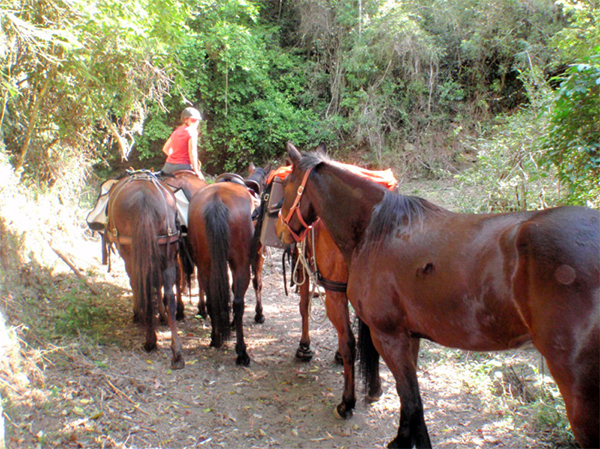 A happy girl – in training with all 5 boys.

However, Charlie had other ideas. When ridden, he strode out and took great pleasure in studying his surroundings, but when led, he trudged behind as if bored, whereas Ned was happy wherever he was and was great to lead.

The boys were bonding with each other too. Charlie became the leader of the five. He was gradually filling out and finding his feet. Charlie and Ned had been racing all their lives – from paddocks to the racetrack and back to paddocks. They’d seen little else; they couldn’t have done because of the way Charlie behaved.

He’d look around, up hills, up to the sky, down crevices, along sheer cliff faces; he’d search and study the terrain. His behaviour made me smile. He was so enthralled, I swear he was just one moment away from galloping to the top of a hill and bursting into song: ‘The hills are alive!’

With all the horses now backed and becoming accustomed to our voice commands and expectations, we decided it was time to add some new challenges. We’d be crossing many creeks on the trail. We knew Stevie would do this but had doubts about the others. 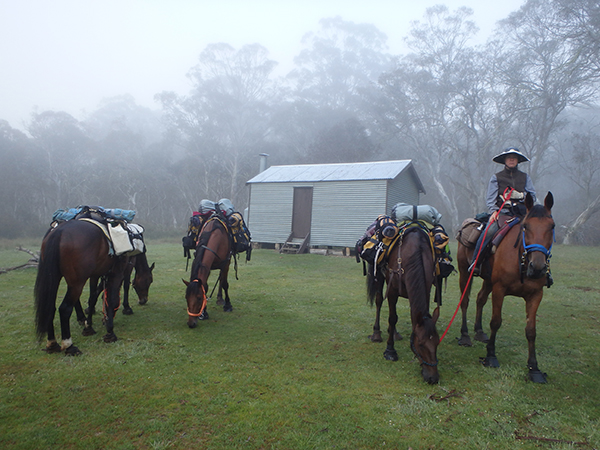 To help us prepare the other four, we let Charlie roam freely once again. He loved his freedom, and quite often he’d trot out in front, leading the herd. He’d hike up a hill in front of us, have a good look around, then come back down, as if scouting for the enemy. I was coping well with Ned and Dom. Dom was great at being led. Ned was relaxing and a joy to ride, with his eager and sure footing. Noel rode Stevie, a great team. Spirit, our cool dude, became utterly content to be led.

Leading horses while riding was new to Noel, but he was doing well until Charlie started to interfere. Charlie would walk in step beside me and my two and not cause any trouble. However, he’d then decide trot up to Noel, slow to a walk, then wedge himself between Noel’s two horses. He’d push them apart with his massive shoulders. With Spirit’s lead rope taut between him and Stevie, Noel would cuss at Charlie. Charlie would then extract himself, but as he cleared Noel’s troop he’d turn ninety degrees in front of Stevie and steer him into the bank (at least it wasn’t the other way, to the two hundred metre drop!). Charlie would just stop, block the way, and refuse to move. I am sure he then looked at me to see how hard I was laughing. I have no idea what was going on in his mind, except he was hell-bent on sabotaging Noel and his two boys. As Charlie came my way once again, he’d just walk alongside me, on a pleasant country stroll, with no problems whatsoever. After five or ten minutes, he’d get another twinkle in his eye and take off towards Noel, and I’d hear, ‘NOOOOO, just f*** off, Charlie!’

I, of course, ended up in a heap, giggling my head off, clutching my cramping tummy.

‘It’s not f***ing funny,’ Noel would scream. ‘Get your bloody horse under control!’

Alas, I wasn’t allowed to let Charlie roam free any more. Both Charlie and I missed those moments. 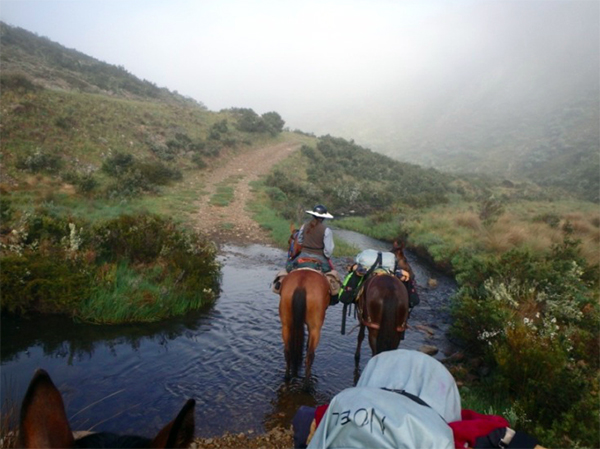 As the mist cleared the countryside revealed its beauty.

About the author: Originally from the UK, Jackie Parry is now an adopted Australian. She grew up with horses in the UK until her world was shattered with a bereavement. Disillusioned with life she ran away to Australia and met and married Noel. They decided to buy a boat and set sail. Mariah II took Jackie & Noel around the world. Pyewacket II (their second boat, purchased in San Francisco) took them across the Pacific Ocean for a second time on a more southerly route. As commercial skippers they have both worked internationally, they have been Marine Rescue skippers and teach commercial maritime. In 2013 they published Cruisers’ AA (accumulated acumen) and Jackie has recently published Of Foreign Build-from corporate girl to sea-gypsy woman. Currently, they are on board their Dutch barge in France. A Standard Journey - Five horses, two people and a tent, was released June 2015. Jackie supports horse charities in the UK and Australia via contributions from books sales and guest appearances/readings at major horse events. Learn more on their website.