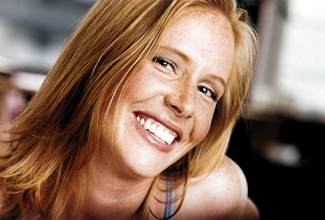 is a travel expert, published author and the host, writer and producer of Equitrekking, the Emmy-Award winning PBS TV series, and Travels with Darley on PBS, Create TV and on AOL, MSN Travel, Huffington Post, Amazon and over 2000 partner sites.

Darley Newman has spent the past few years traveling the globe, riding horses with local people in awe-inspiring locations ranging from Iceland to Botswana to Costa Rica to Hawaii. In her quest to showcase each destination from a local’s perspective, Darley provides viewers with authentic, culturally enticing experiences that they can recreate on their own. Broadcast across the U.S. and in over 83 countries worldwide, each Equitrekking episode takes Darley and her viewers on a journey with local people to the best adventure hotspots, restaurants, cities and nature escapes.

Darley has been honored with five Daytime Emmy Award nominations for hosting, writing and producing Equitrekking, alongside media moguls Ellen DeGeneres, Jon Stewart and Stephen Colbert. She received the North American Travel Journalist Award two years in a row for Best Travel Broadcast and the Merit Award for Best Travel Book. She was recently honored with the Inspiring Woman Award from Women in Philanthropy and Leadership. She has been profiled in USA Today, Chicago Tribune, Washington Post, NPR and makes appearances in her role as Contributing Editor to Budget Travel magazine on NBC's The Today Show and The Weather Channel.

Darley’s experiences have ranged from the exotic and challenging to invigorating and serene. Getting charged by an elephant in Botswana’s Okavango Delta, climbing an eleven-story tree in the Costa Rican rainforest, whiskey tasting in Scotland, dogsledding in Quebec, whitewater rafting in Alaska, surfing in Ireland, rappelling down a waterfall in Jordan and zip lining on Maui are just some of the exhilarating adventures she’s enjoyed to help educate and excite her dedicated fans.

An entrepreneur and award-winning travel book author, Darley has hosted segments for Ralph Lauren TV, Starz Networks Encore Channels, international networks in the UK, Ireland, Japan and France, and covered the White House for The Talk Radio News Service. She’s produced for CBS, PBS and various documentaries and series and received her B.A. in Electronic Media and International Business and Cultures from The George Washington University.

She is also the founder of EquitrekkingTravel.com, featuring exceptional equestrian vacations, Top20Ranches.com, featuring great ranch vacations, and Equitrekking.com, the companion website to the Emmy-winning TV show. Her ability to create her dream job from the ground up got her featured in the book, How’d You Score that Gig, a Guide to the Coolest Jobs.

Darley grew up in South Carolina and started riding horses at the age of seven at camp in the mountains of North Carolina. Growing up in a beach area, Darley spent lots of time outdoors playing tennis, surfing, taking tap dance lessons and participating in community theatre. In high school and college, Darley studied abroad in Spain and Italy, trips that fueled her interest in seeing the world. Primarily an English rider at home, Darley rides different horses and all types of local riding styles around the world.

While filming Equitrekking, Darley constantly encounters challenging places to explore, like the crater of a volcano on Maui, the backcountry in snowy Queb 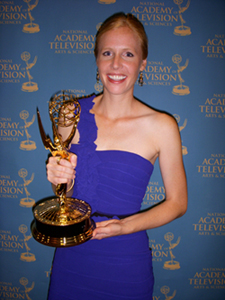 ec, the varied terrain along the U.S. Mexico border, the Wadi Rum Desert in Jordan and the rainforest in Belize. She’s daringly ridden championship cutting horses in Colorado, award winning Andalusians in Spain and famous movie star horses in Utah. Her ability to make on camera guests feel at ease has allowed her to interview people of varying cultures and walks of life including HRH Princess Alia in Jordan, Yeardley Smith, the voice of Lisa Simpson on The Simpsons, world-class scholars and historians, Middle Eastern Bedouin, South American gauchos and authentic working cowboys.

Darley chronicles her adventures through Darley’s Blog, Equisearch.com, Equitrekking’s monthly e-newsletter and various magazines and travel publications including CNN, ABILITY magazine, Women's Adventure magazine and BudgetTravel. She is author of the Equitrekking: Travel Adventures on Horseback companion book, published by Chronicle Books. Darley writes a regular column for Practical Horseman magazine and frequently speaks at events and to the media.

For more information or to schedule an interview with Darley or find out about speaking engagements, contact us.

Recent speaking engagements include the Women's Leadership Conference and Celebration of Inspiring Women.

Learn more about Darley on her website in the below Interviews and on Equitrekking's media section and press page:

More Equitrekking and Darley In the Media. 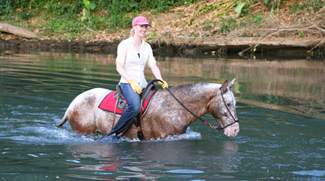 Number of horses Darley’s ridden while filming Equitrekking. “I ride different horses and different breeds  wherever I go, from Arabians in the Middle East to Criollo horses in South America  to Quarter horses in the American West. I am constantly adjusting to new riding styles and having fun with new equestrian fashions.”

35 and counting- Number of Equitrekking episodes. “People often can’t believe some of the places that we ride. I have had people ask if there are really horses in Iceland. Up until the early 20th century, horses were the sole mode of transportation around Iceland. When you visit and see these beautiful horses running through the sometimes treacherous terrain in Iceland’s lava fields, you’ll understand why.” 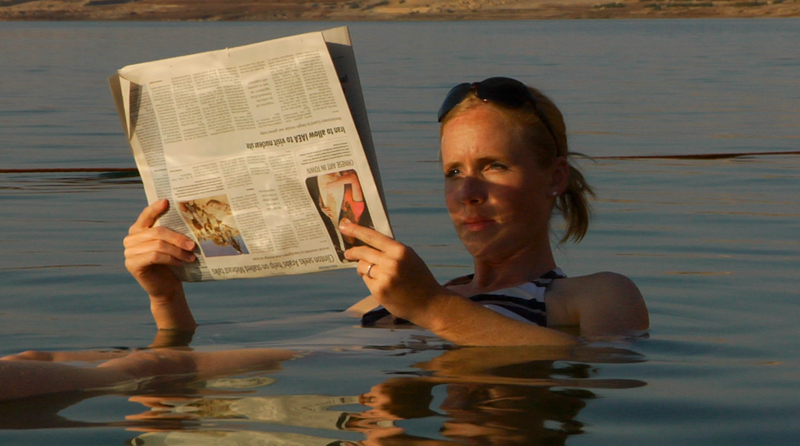 Endless. “I often don’t get to carry a whole lot with me when we are filming and sometimes we’re out longer than we planned, so these energy boosters are a hot commodity.”

Favorite spa experience- Reykjavik and the Dead Sea. “It's a tie! After herding horses through the lava fields of Iceland, it felt really good- almost necessary- to soak in a hot pot at the spa, especially since I was riding again the next day. The Dead Sea in Jordan was just so different. I got in some reading while I floated and loved seeing the sunset from my resort's pool.”

Best Camping- Wadi Rum and Dana, Jordan. "In the Dana Nature Reserve outside of the small village of Dana in Jordan, we camped in this very cool eco-friendly setting and in the desert, I spent time with the Bedouin. We had beds in our tents and the sandy floor was covered with carpets. There was always a nice fire with strong cardamon tea. It was peaceful." 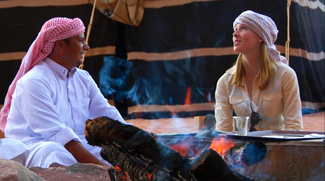 Best on the trail snack- Tapas in Spain tie with Turkish pide in Turkey. “I could really get into the Spanish lifestyle. On a ride through the countryside outside of Seville, we stopped for an aperitif on the trail. I wasn’t expecting the spread before me. Alfonso, who we rode with, had prepared all of these delicious Spanish hams and cheeses, breads and crackers, along with sherry. It was amazing. In Turkey, we stopped for a picnic by the fairy chimneys of Baglidere. We ate this amazing Turkish pide, which is similar to pizza or a one-sided pita covered with good fixings. Mine was baked with tomatoes, feta, lamb, garlic and onions.”

Most useful bush remedy- Belize jungle. “Albert, who guided me, is an expert on medicinal remedies and showed me everything from leaves that I could wrap around my head to alleviate a headache, to leaves I could crush and use as a natural bug repellent, to cutter ants that could be used like stitches to suture a cut or wound. He demonstrated the power of the cutter ants by letting one bite his hand. Ouch!” 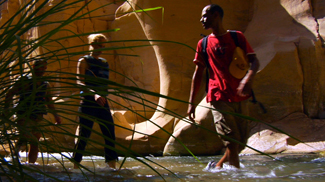 Best wildlife- Costa Rica. “In Costa Rica, I encountered howler monkeys, bright macaws, iguanas, the red-eyed tree frog, poison dart frogs, cutter ants, and more. It was amazing to see so much wildlife in one area.”

Most challenging adventure activity- Tree climbing Costa Rica. “I climbed a 12 story tree in the rainforest in Costa Rica. It was extra challenging because we were filming, so I had to stay suspended in the air while I waited for our cinematographer to get different angles. I thought that my arms were going to fall off. The climb took me to the top of the rainforest canopy, where the views at sunset were beautiful.”

Most Interesting Hike- Jordan. "We hiked through Wadi Mujib, Jordan's version of the Grand Canyon. It was so much fun, like a giant, natural water park with rocks to slide down, mini waterfalls... until we reached the giant six story waterfall that we had to rappel down. Our entire crew 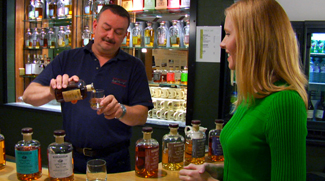 was a little nervous as we rappelled through this waterfall. Not to mention we had to do it with our high definition film equipment."

Worst Breakfast- Scotland 8am Whiskey Tasting. "We did a segment in Scotland on how whiskey is traditionally processed and this included a very early tasting. We had to film in the tasting room before they opened it up to the public and that meant an early morning tasting. Let's just say peaty whiskey and cereal don't go too well together."

Most dangerous adventure- Snowmobiling in Iceland. “I was a little wary of snowmobiling on a glacier, because there are hidden crevices. If you fall in, you are in real trouble. My guide used GPS to help us get around, which made me even more scared, because when I use my GPS to take me places, it often gets me lost.” 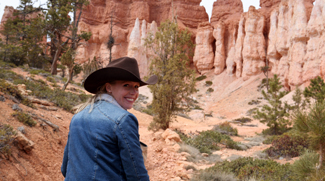 Most Challenging Horse Ride- Bison round up on Antelope Island, Utah. “There were only two of us trying to move a large herd of very large bison, and since I had never herded bison before, I was definitely the weakest link. It was a very good thing that my riding companion Ron and horse Sawdust were old pros, because those bison are scary up close.”

Hottest Ride- Belize. “We stayed at an eco-friendly lodge in the jungle, which was beautiful, but you really appreciate solar powered showers after a day of riding in the sometimes steamy jungle.”

Coldest Ride- Quebec in the snow. “I thought it would be beautiful and dreamy to film a snow riding episode in Quebec. My crew wasn’t too happy about donning snow shoes and trudging off the trails to film us, but the episode is gorgeous and cantering through the snow is a rush.” 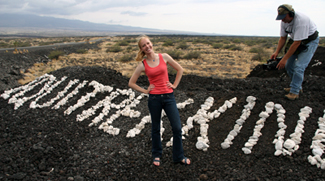 Highest Ride- Engineer Mountain, Colorado. “Engineer Mountain rises to over 13,000 feet above sea level. When you are up at those altitudes, the weather can change quickly. We endured a sudden hailstorm. As the ice pelted me, I really appreciated my cowboy hat and layers.”

Most Challenging Film Shoot- Hawaii’s Big Island. “While we were filming, we were staying in this house in Hilo that was all screened in and there was an earthquake. Then a hurricane was coming ashore so we had to evacuate to another part of the island. Later in the shoot, we were riding in Waipio Valley, a valley that was destroyed by a tsunami in 1946, and there was a tsunami warning. Finally, we’re filming at Parker Ranch and there was a nearby wildfire! Fortunately, we still were able to film a great episode, despite our bad luck on the Big Island.”