Enjoy a cowboy poem about overcoming getting older after 92 years in the saddle from a Wyoming cowboy who's still riding! 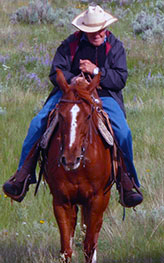 Nate Brown is a horseman, poet, riding guide, rancher, and co-author of a children's book entitled Roll On, Little Dogies. Still today, at the age of 92, Nate leads riders on working horse vacations at HorseWorks Wyoming. Having been a cowboy his whole life, you can imagine that when his knees began to wear out and a doctor suggested surgery, he wondered if he should do it and, if he did, if he'd ride again.

Many of us have had to overcome injuries, surgeries, illnesses or other trials that take us out of the saddle for a while. Enjoy a cowboy's perspective on it all and have a laugh at Nate Brown's poem about the power of medicine and the power of horses in keeping us young and active.

I’ve spent most of ninety-two years horseback,
Which counts up to a lot of rides,
And after a while my legs
Just kind of molded around their sides.
If there’d been such a thing as a bow-leg’d king,
I would have worn the crown.
When I stood up in the bow-legged contest,
Them other ol’ duffers just sat back down!
Then the shock absorbers plum wore out
And rubbing bone on bone
It got so every time I took a step
I had to stop and groan.
Then I met a man from Mesa.
Larry Sanders was his name.
Oklohoma hills were his home range.
Orthopedics was his game.
He said, “I’ll cut those hind legs off
A little below the hock
And when I put them on again
Painless you will walk.”
He said, “And when I put them on
‘Bout three degrees knock kneed
You’ll find it will do wonders
For your stamina and speed.”
I said, “We may have a problem here,
Thought you know best of course.
Could you put ‘em three degrees toward bowed
For hangin’ on a horse?”
Larry said, “I swear, your horse won’t care,
But if he dare complain,
Just hit him down the hind leg
And give him lots of rein.”
So now tis done; I ride, I run,
I trip the light fantastic
On ball joints made of stainless steel
And sockets made of plastic.
My legs are sturdy specimens
Of power and stability
I can dance from dark ‘til dawn
Or ‘til they close the facility
And I must say, it’s really great
To have all this agility
But it raises a situation
That destroys my credibility,
For when I step out on the stage
To tell these cowboy tales
And talk about the horses I’ve rode
Up and down the trails,
Each cowboy in the audience
Just nudges his date and say,
“This ol’ boy ain’t rode that much.
His legs is bent the wrong way!”

-- by Nate Brown of HorseWorks, Wyoming.