The Mustangs at McCullough Peaks- History and Legend

With binoculars in hand, Ken (Kenny) Martin and I are looking across the badlands in search of "The Wild Bunch," one of a few bands of horses that Kenny has been watching for the past six years. 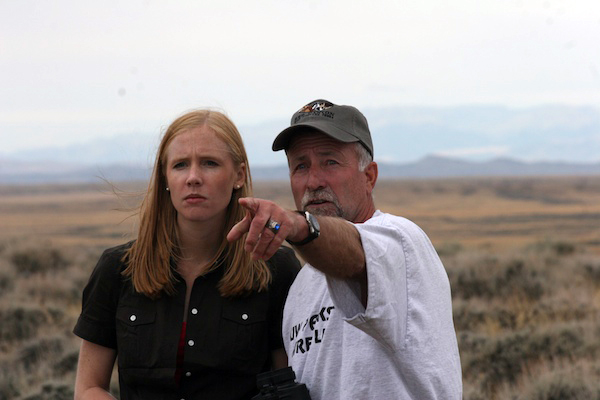 War Bonnet is the dominant stallion of this band, which is composed of 10 mares. This is a large number of mares for one stallion. As I stare across the vast land of yellowish grass and hills with lines of red, I realize that the wild Mustangs in Wyoming are even more majestic and interesting than I had even imagined.

Kenny Martin takes groups out to see some of the approximately 160 horses who inhabit the McCullough Peaks range outside of Cody in Wyoming. Kenny believes that these horses are direct descendents of Spanish horses. He also claims that they may also be descendents of the horses that Buffalo Bill used in his Wild West Show. Whether it's true or not, I like the legend. 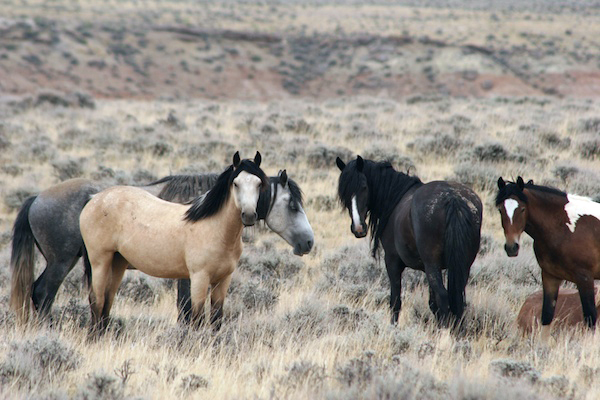 "The Wild Bunch" is actually two bands who travel close to each other. There is War Bonnet's group and Grey Face's group. I watch a couple of the foals, including a buckskin foal, who is staying close to his mother.

All of the horses look really healthy. I am actually surprised how healthy they look for horses surviving in the wild. I can't help but compare them to the horses that we saw recently on Cumberland Island off of the coast of Georgia. These mustangs look well fed, unlike the scrawnier horses on the island. This makes sense. The land here in Wyoming is high desert with a sometimes fierce wind, but it is somewhat more hospitable than the subtropical conditions on Cumberland Island, GA. 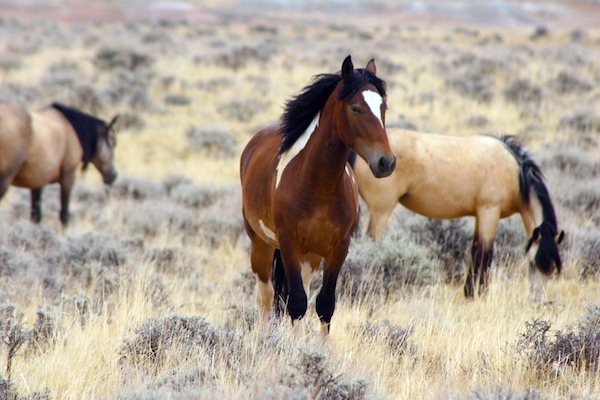 The land here is beautiful and so are the horses. In the distance, Kenny points out two five-year-old bachelors, Raven and Crazy Horse. Crazy Horse has half a tail, which he lost in a battle. Raven briefly led a band of mares, but lost them to War Bonnet in a fight.

The herd dynamics are the most interesting part for me. That and just watching the horses move in the badlands. Kenny has been observing the horses for years. He's formed an understandable attachment to them and knows each of their personalities well.

War Bonnet looks like a paint horse, but he has a pink nose. There are about 40 horses in the Wild Bunch, a similar number to another group that we are looking for called the Red Paint Band, named after the mountains in the distance, which look like they have been painted red. 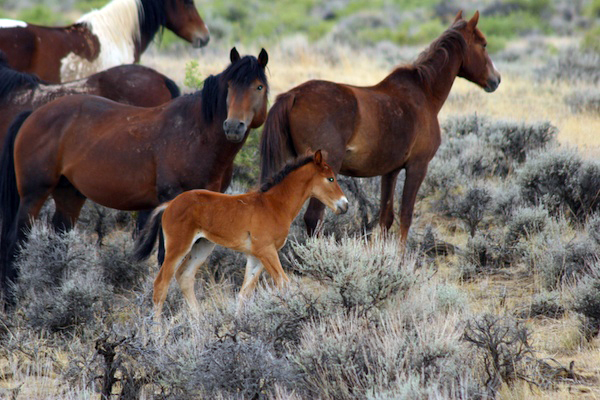 McCullough Peaks is about 22 miles outside of Cody, Wyoming, and encompasses 110,000 acres. The BLM is in charge of these lands and in charge of the horses here. We run into two women who are studying the horses while out with Kenny. They are closely monitoring the horses to make sure that the birth control that they are using to control the herd's population isn't changing the herd dynamics. The herd at McCullough Peaks is a strong and healthy herd, something that they don't want to change.

I can see why people would want to adopt these particular wild horses. After watching The Wild Bunch for a while, we venture back to Kenny's van, looking out for cactus and rattlesnakes as we trek around. We're off to find the Red Paint Band and the interesting characters that live within.