A wrangler writes about an exciting ride to the Snake River in Grand Teton National Park.

Last summer I had the opportunity to work at Lost Creek Ranch near Jackson Hole, Wyoming. As a wrangler I would be on horseback for four hours a day or more. I would take the guests out through the landscape exploring trails and wildlife on a daily basis but there were some rides that were unforgettable. 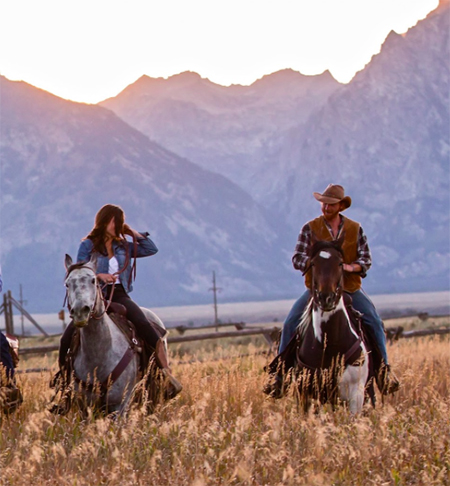 Ryan and I at the end of the summer. He’s on Mystery. Photo By Ashley Larsen.

More often than not, if the weather was cooperative, we had more or less three ride options. We could climb the mountains behind the ranch through the forest. We could canter through the aspen groves just before the plains, or we could go on the infamous “river ride.”

We weren’t really even supposed to talk to the guests about this alluring ride.

But as always, by Thursday morning the guests would be brimming with excited whispers, hoping to be one of the lucky few to be selected for the ride. 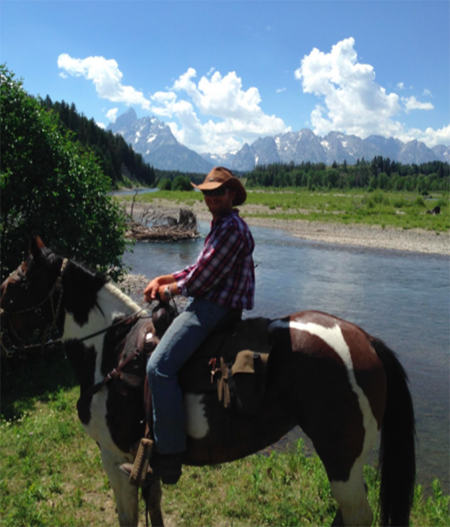 Ryan and Mystery down by the river that day.

The truth was, it was a rather intense ride and not just anyone could go. It was grueling for both the horse and the rider. But wow, was it spectacular. I will always desperately hold onto the memory of when I was first taught the trail.

It was the second half of the workday. We had already taken out the morning rides and that afternoon we had a small schedule. I was still relatively new and Ryan, one of the other wranglers offered to show me the trail.

I saddled up Slim, a big beautiful black horse, strong and one of the more experienced, he wouldn’t have a problem keeping up. Or so I thought, until I saw that Ryan had brought out Mystery, a hot, fiery, paint mare that was fastest in the herd. We started out immediately and we started out fast. I was normally used to slow paced rides watching over everyone but now, it was just the two of us and I knew it was going to be a challenging ride. Cantering on a small trail through the sagebrush we made it quickly to the forest line and started sliding down the embankment. We were dodging trees and leaning as far back as we could in our saddles. 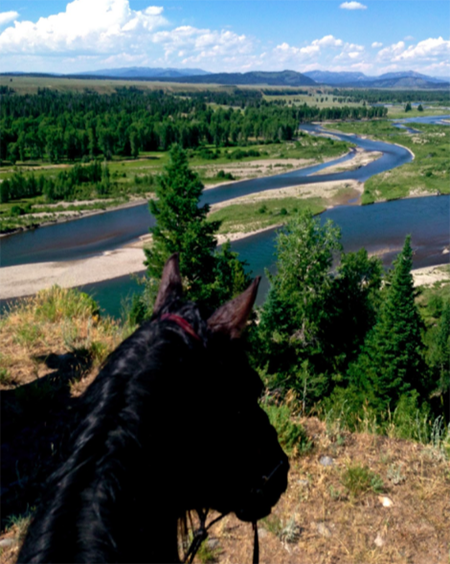 There was a dip in the ground and then after stepping around a large fallen tree we emerged onto an open plain. I smiled at the ground; it was soft and flat, I remember thinking instantly that it was perfect for running… And as if he knew, Ryan shot a quick glance back at me and took off.

If it’s not too embarrassing, I’ll admit that a good portion of the ride that day I spent deflecting rocks with my arms. As Mystery charged ahead I’d let Slim stretch his big body out at a slower gallop behind as my face accumulated the dirt upturned by the mare’s hooves.

And as you could expect we covered about three miles pretty fast and we had made it to the road. I was brimming with excitement; I had never been on the other side before. We ran across watching and listening carefully for traffic and then walked through a couple of dips in the plains. 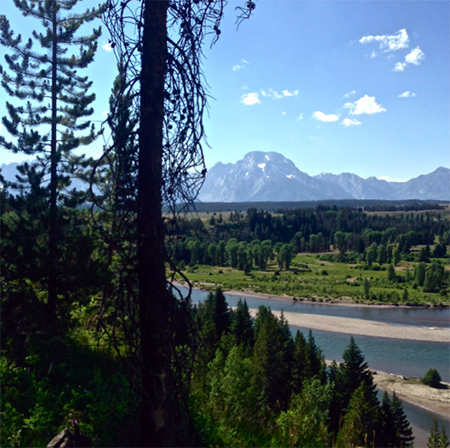 A glimpse of the river from the enchanted forest.

All of the sudden Ryan pulled up and back and I caught my breath in my throat. Unbeknownst to me we had come up on an obscured drop off.

We were standing on the edge of a cliff and down below us all splayed out, was the Snake River. Birds soared in front of us at eye level and we watched families of pronghorns play alongside the embankment. I remember choking back tears and breathing in as deeply as I could as if it would allow me to always hold onto this moment forever.

But it was time to move on again. We still had about 15 miles to cover.

We made our way down the side of the cliff through dense woods and lush vegetation. Vines wrapped themselves along massive fallen trees. There was a peaceful silence that felt so heavy in the air I couldn’t help but think we were riding through an enchanted place.

After the woods the trail turned into switchbacks and at the bottom was our first water crossing. We slid down the last section of the cliff and into the water. The horses stood knee deep in a crystal blue stream, dipping their heads in, grateful for the coolness that moved along their skin.

Looking up, I noticed we were now in a sort of enclosed grass valley. To the right you could see a distant tree line encircling this private place. There was no sign of human life except for the faint trails in the grass. We picked up a slow canter alongside the stream until it brought us to the river.

It was so beautiful I was in shock. I felt the tumult of tears coming back up again. Looking up to our left you could see the snow cap mountains looming over the delicate landscape. And the sound of the river, my god, the rushing water surging from the recent snowmelt. My face was starting to hurt from smiling and my heart was pounding with happiness. I was dreaming I thought, I was vividly dreaming, but in reality I was just truly living.

Following the river upstream we came to another crossing. We were making our way onto an island the river had shelved out. The island was filled with cotton trees; Ryan described the bald eagles he had watched perched on the branches as their arms brushed our knees.

Into the water we went again making our way off the island and onto another small trail that led into the woods. We had crossed over and picked up the pace. We emerged again onto another plain and to our right a herd of buffalo lazily waded through the grassfeilds. Soon, the trail began to curve into these massive serpentine loops and we ran the horses watching the river and feeling the summer sun on our skin. 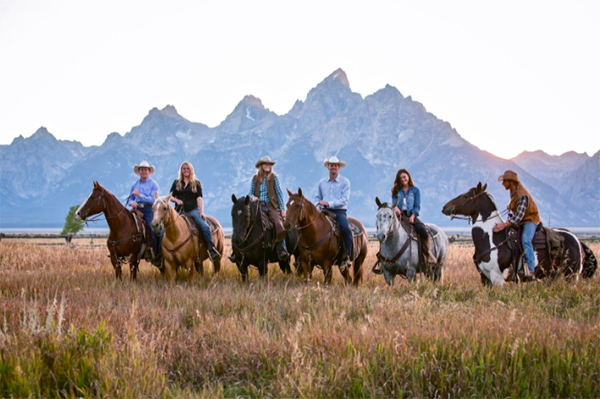 All the wranglers together. Ryan trying to calm Mystery down. Photo By Ashley Larsen.

I kept glancing back nervously at the magnificent animals. I had heard they could outrun a horse for forty yards. But as we made our way along, the herd began to fade out of sight.

And then, all of the sudden we were there.

Ryan jumped off his dancing paint. We put our phones and radios aside so they wouldn’t get wet and then hopped back on. Mystery jumped into the water and I followed suit with Slim. I understood now why it took so long to get to this spot. It was an offshoot stream of the river that was wide and sandy, perfect for the horses’ feet. Ryan pointed out landmarks that gave us about 100 yards to run.

And then… we raced.

Me walking through one of the fields with Fed Ex. Photo by Ashley Larsen.

Back and forth. Back and forth, the horses loved it, prancing and splashing in the water. We were soaked and dying laughing. Our wet jeans clung to our legs and our leather boots were filled with water. The water came up to the horses’ knees and because I was often in second place I was routinely drenched more than Ryan. But I didn’t care. This was bliss.