The history of wild horses at White Sands and Chaz, a Mustang who found a home- a wild horse adoption success story!

Story by Steve Simmons, Photographs Supplied by the Joe and Merrill Hancock Family.

The wild horses of White Sands, New Mexico had lived there for generations. Actually for more than a century.

There were four distinct groups of horses at White Sands. One of the four groups of horses were descendants of the horses owned by Sheriff Pat Garrett. Garrett, as you may remember, is heralded as the one who shot Billy The Kid in New Mexico in 1881. Garrett ranched in the area during the last 25 years or so of his life, but died in disputed circumstances in 1908 after being shot. His horses, and those of others, roamed the White Sands area essentially untouched and unrestricted, even by the ranchers in the area up until World War II.

Another group were descendants of horses from Eugene Manlove Rhodes who ranched in the area in the early 1900s. Rhodes was a writer and rancher who wrote a lot about the West. Who knows? Some of these horses may have been related to Billy’s horse!

Life changed for these horses as a result of the Manhattan Project and the plans to detonate the first atom bomb in the area in 1945. The Army took over nearly two million acres of the White Sands area and fenced them off from the public. This two million acres housed most of the horses and several watering holes. Although the fences were designed to keep the public out, they also kept the horses in and they could no longer freely roam in search of food and water. Nevertheless, things remained in something of a balance until the late 1980s when the food supply began drying up long with the sources of water. 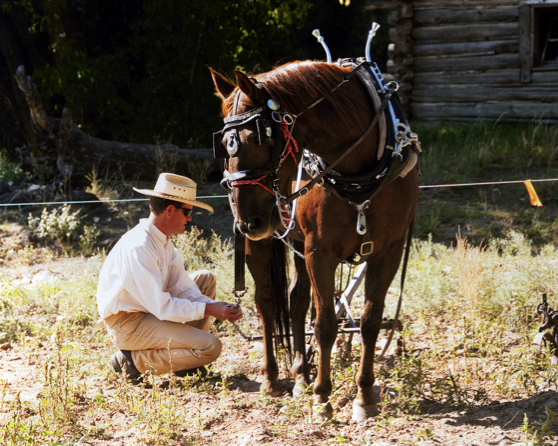 Slowly, some of the horses in one particular group began dying off. In order to try and relieve the pressure on the area and the growing size of the various groups, some horses were captured and sold off to an unknown future. A huge public outcry ensued, and the Army had a PR nightmare building on their hands. Many of these were big, rugged, well built horses that, obviously, could survive in very harsh conditions.

There was even a legendary band of stallions that would appear out of nowhere and then disappear again. Were they real or phantoms, this was never decided. Visitors to the area, and people living in the nearby town of Alamogordo, would stop and watch these horses race across the dunes and fantasize about these mystical creatures who could run so fast and were so big and strong.

In reality, these horses did belong to the Army and were not protected by the Wild Free Roaming Horses and Burros Act of 1971 (Public Law 92-195). They were not on BLM land, but Army property, which meant they belonged to the Army and could be disposed of as the Army wished. (This position may or may not have withstood a legal challenge but none was forthcoming).

After the uproar from the first few sell-offs, the Army decided they needed to solve a PR problem, not only of the mistake of the sell-offs, but of the increasing number of dying horses who, by the early 1990s, were becoming emaciated and dehydrated. The exact number of horses that died as a result of the water and food shortages is not known, but at one point there were thought to be 3,000+ horses on the range and with the new foals that appeared, about 2,000 were taken off in the rescue effort. The Army wanted these horses gone and the sooner the better. Somewhere in this mix was a two-year-old sorrel colt named Chaz. 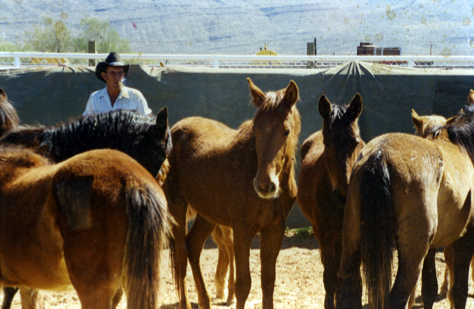 Chaz as a two year old in a holding pen in Alamogordo, after being gathered from the White Sands Missile Range in 1994.

In charge of the program, and the safety of the horses was a veterinarian, Dr. Don Hoglund. Hoglund had worked at the prison in Santa Fe with the Mustang program and had a lot of experience as a horse trainer as well. Along with Hoglund, Les Gililland was hired to plan and execute the rescue. Gililland, and his family, had ranched in the area for generations but lost their land when the military took over the area for weapons testing during WWII. This was supposed to be a temporary takeover but exists to this day.

Gililland was as tough a cowboy as could be found, but as tough as he was he loved horses, and especially these horses. They’d been there all his life and he hated the idea of rounding them up and removing them. Gililland and Hoglund formed an uneasy alliance, Hoglund’s educated ways versus Gililland’s learn as you go while living the life, created lot of initial distrust and icy stares, but they were bound by their mutual love of horses and a commitment to get them out quickly and safely.

To collect the horses, traps were built in several locations in the area. There were four groups of horses and to drive them all to one spot would be hard on them, especially in their condition. Additionally, although they tried to get the round-ups completed before Spring foaling, there were foal showing up all throughout the round-up.

Traps were made from fence panels and natural canyons in the area. The round-ups took months but the horses were eventually gathered, held in the pens and fed. They were also given exams, vaccinated, and many of the stallions were gelded. They all had to be certified as being in good health by Hoglund before they could be transported or sold at auction.

Nevertheless, the round-up went off with very few problems. The simple fact is that the Army wanted these horses removed from the area. Hoglund was given the contract to accomplish this goal. They did intentionally leave behind about 350 horses, but these were removed in the late 1990s.

The first auction was held in Alamogordo, New Mexico in the summer of 1994. This begins the story of Chaz, the White Sands Mustang who found a home with Merrill and Joe Hancock here in New Mexico.

“We heard about the auction and wanted to see what we could get.” recalls Joe Hancock. “So we made the trip to Alamogordo." 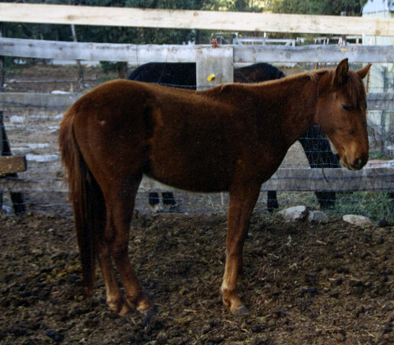 Chaz as a two year old right after arriving home with the Hancocks.

The Hancocks did not think their chances were very good as they had a high selection number but they were lucky.

“We walked the pens and found this horse, who was a misplaced stallion, in a pen with mares. We liked him right away. Everyone else was looking for special markings, color, etc. but we didn’t care about chrome. We wanted a good horse. His legs were straight and his confirmation was good, even though he was very underweight. As a two year old he weighed about 200 lbs.”

“We didn’t even have a trailer with us and had to call out neighbors to come down and help us,” remembers Merrill.

One of the stipulations of the auction buyers was that they had to agree to keep the horses for at least a year. It was felt, or hoped, that after a year these new owners would have enough investment in their new horses that they would not end up at a sale barn somewhere. There was also a limit of four horses per person.

“This was fine with us,” stated the Hancocks. "We wanted a horse for a long time, and that is what we got.”

“Getting him home was the easy part,” stated Joe. “It took three months to get a halter on him and to gain even some minimal trust. If you went in the pen with him he wanted to fight. He would rear and charge at you almost immediately. He still hates dogs in his pen, no doubt from watching coyotes eat the dying horses before the rescue.”

While other horses have come and gone from the Hancocks, Chaz is still there. “He has taught many, many people to ride. He is so forgiving and makes people feel comfortable when they are on him.”

“I actually taught him to drive before I rode him,” states Joe. “He has pulled a carriage for me for years, and we do one or two weddings a year with him. I have also used him as a lesson horse to teach people to drive.” (including the author of this article)

Chaz is now going on nineteen. He has some occasional arthritis on his left front knee but he still likes to run around and play, to be ridden and driven.

If you ask the Hancocks what they think of their rescue horse they both say “This is the best horse I’ve ever had.” 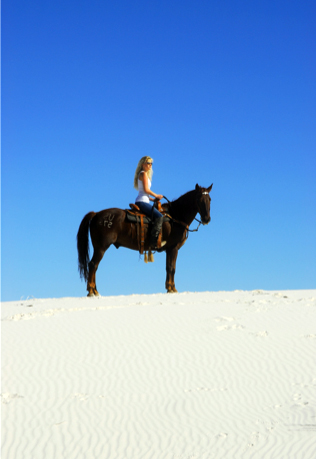 Hoglund’s educated guess is that Chaz, as a solid sorrel with no markings, came from the horses left left behind by Eugene Manlove Rhodes.

There were other auctions, including Oklahoma and others in California. Even to this day the Hancocks will occasionally see another horse with the distinctive military USXXXX brand.

“We always ask if the horse came from White Sands and the answer is invariably yes.”

In looking back at the rescue, Karen Sussman, president of the International Society for the Protection of Burros and Mustangs stated, “I think the Army did a wonderful job of rescuing these horses."

“These are very unique horses,” according to Sussman. “I use them as a baseline for how horses really do behave in the wild unaccosted by humans. They have wonderful herd behavior and great conformation.”

This fits for Chaz. “Whenever we have had other horses they always relate well to Chaz and he seems to be the center of our group. The other horses always miss him when he is out being used,” according to the Hancocks.

Chaz has been a wonderful addition to the Hancock family and will certainly live out his life with them. “After eighteen years, he is not going anywhere,” states Merrill Hancock.

“On the whole it had a good ending,” according to Sussman. She has about seventy of the last group of horses taken from White Sands in the late 1990s at her sanctuary in South Dakota.


If you want to read more about the White Sands rescue find a copy of Nobody’s Horses: The Dramatic Rescue of the Wild Herds of White Sands by Don Hoglund.