The deserted city of Kayakoy outside of Fethiye in Turkey is one of the spookiest places I've explored. Norma from Perma Ranch takes small groups on day and week long riding excursions from Perma Ranch, including to Kayakoy, where up until the 1920's Anatolian Greek speaking Christians lived. Norma is British. She fell in love with this part of Turkey while on vacation here and decided to move.


She led us to the deserted city of Kayaköy in the town of Kaya. On the ride there, we passed lots of small farms, stone fences and family run restaurants. We also passed Roman tombs and had the chance to do a short canter down some suitable roads. Kayaköy was once a town inhabited by thousands of Anatolian Greeks.

The Greeks were forced to abandon it during the population exchange agreement between the Greeks and Turks in the 1920’s. Norma talked about this book, “Birds Without Wings,” which I really want to read after riding through Kayaköy. It’s really eerie to ride through this large deserted town. The people that lived here were forced to leave their homes and lives in Turkey, taking basically what they could carry, and head for Greece. 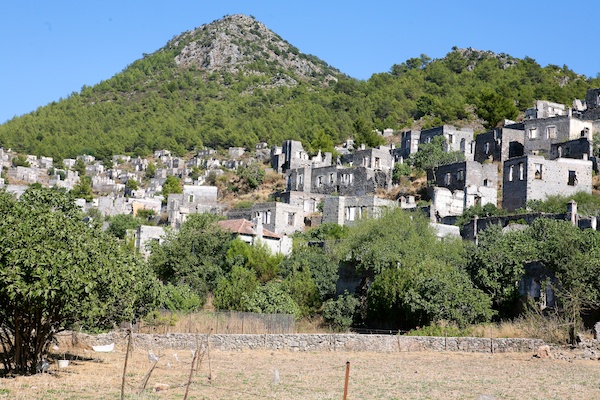 We rode through the old cobblestone paths. We tied up our horses and hiked up to a church further up in the town, where Norma described a bit more about what life might have been like here. I could imagine the activity. Children running up and down the hills, flowers outside of the windows of the homes.

For dinner we headed to a local kebab place, where we were able to grill our own food by the table. It was really good, especially after a long day on the trails.