Singer and songwriter Jessie Veeder, who lives on a working ranch in North Dakota, shares why making time to horse ride with loved ones means so much.

Last weekend Little Sister came home for the hustle and bustle and celebration of our nephew's first birthday. Have I mentioned that I love it when Little Sister comes home? Well, if I haven’t said it sixty-thousand times already, I am saying it again and singing it softly to myself in a little tune I made up while I work on building her a quaint house in the oak trees next to mine, complete with a tin-can phone stretched across the yard and a couple of reclaimed lawn chairs from mom and dad’s junk pile. 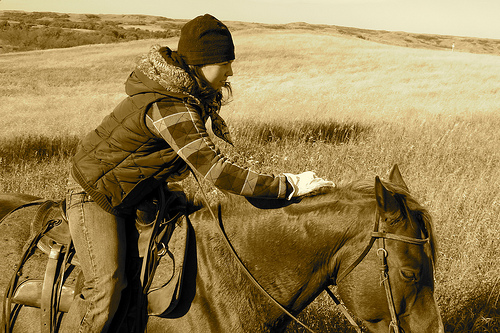 Because here’s the thing. Everyone has people in their lives that they would like to keep wrapped up in a pretty little box in their pockets so they can carry them along and take them out whenever they need a good laugh, a smile, someone who really understands where you’re coming from, and who will, well you know, tell it to you straight.

My Little Sister is one of those people for me. I wanna wear her as a locket and show her off to friends. I want her confidence and quick wit at my fingertips. I want someone to drink margarita’s with and who will consume bowls and bowls of tortilla chips and cheese dip with me in the middle of the day in sweatpants without judgement… whenever I feel like it. 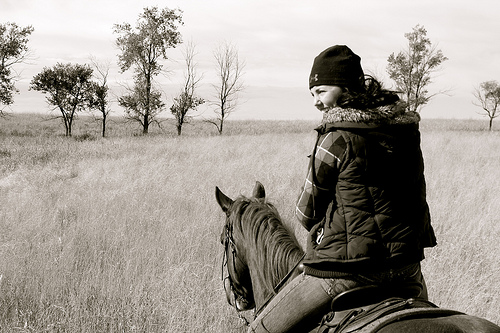 I know this is weird. I tested the theory out on husband, and he said I was a dork. Especially after I told him I wanted to wear him as a scarf around my neck so I would always have him there to protect me and provide for me better judgment wherever I go.

Well, it sounded good in my head, so I’m sharing it here. I imagine a few of you will be able to relate to my desire to be able to morph my favorite people into accessories and then un-morph them back into people again whenever I feel the need… Anyone? 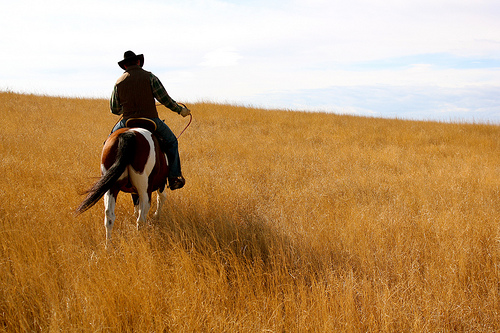 Well, anyway, since I have yet to find that Genie to grant me my three wishes, I will just have to take what I can get of Little Sister when she comes around. And one of my favorite things to do when she shows up is to grab her and Pops and Husband and the horses and take a long ride out in the buttes. Because really, there’s nothing better than the smell of horses, crisp air, quiet trails, two of my favorite cowboys chatting about plans and my favorite high strung best friend on a high strung horse snorting and laughing and prancing along the prairie beside me. 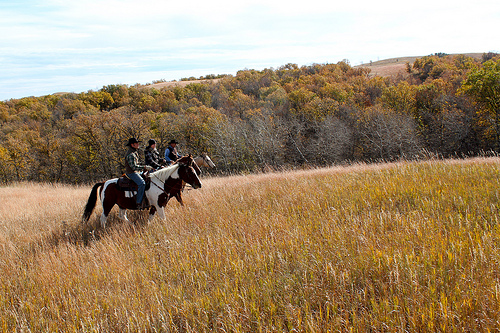 So that’s what we did last Saturday as our chatter around morning pancake breakfast brought us too quickly into the afternoon It was a little chilly out there when we stepped out into the farmyard and Little Sister was dressed just a bit too fashionably for this type of activity, so I promptly dug out my dorkiest hat, gloves and fur-lined vest and we were on our way under the big gray sky that hadn’t made up its mind whether it wanted to rain on us or shine. 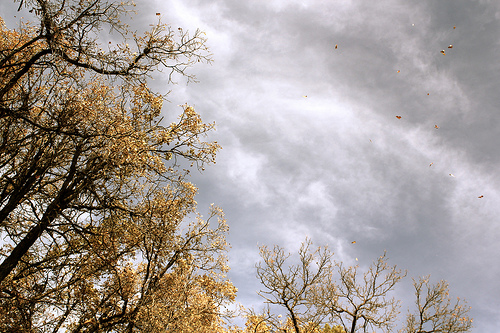 When taking a ride is my idea my posse generally agrees that we will have no particular agenda but to enjoy ourselves out here, to explore and tell some stories, check things out or just be quiet. And so that’s what we did. We strolled through golden grasses, and crunched through fallen leaves in the coulees, the two black cowboy hats in the lead and the frizzy haired women trailing behind. 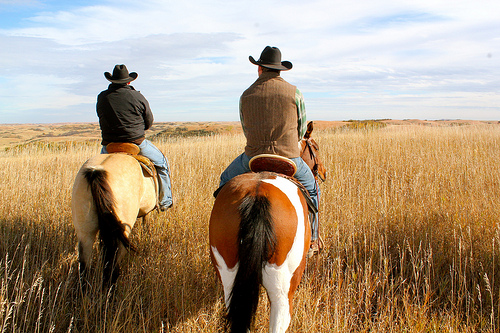 We stopped on hill tops to catch up, to take a look around at how some of the leaves are desperate to hang on the oak trees, to check out the fences, to listen to one of Little Sister’s stories about school or one of my long stories that usually ends with me embarrassing the shit out of myself.

And as the words between sisters bounced off of the hill tops and blew away with the wind and the guys talked hunting and horses, Little Sister’s horse, as he generally does, began to warm up enough to show his personality and the wild whites of his eyes. Here I will tell you that unless that horse and I are chasing after something that is running away from us, I prefer to avoid the Red Fury and stick to the Paint Mare, but Little Sister barely notices the animal beneath her snorting and prancing and all around making sure the other animals know that he needs to be in the lead.

So in the lead she went. That’s the funny thing about horses, while you are on their backs living your own little life, having your own conversations, thinking your own thoughts, they are underneath you, carrying you along on strong and quick feet and, if they are allowed, they are doing the same damn thing. And it was quite apparent that the Red Fury had only one thing on his mind that day and that was to be ahead of the mare I was riding.

It was driving him nuts. 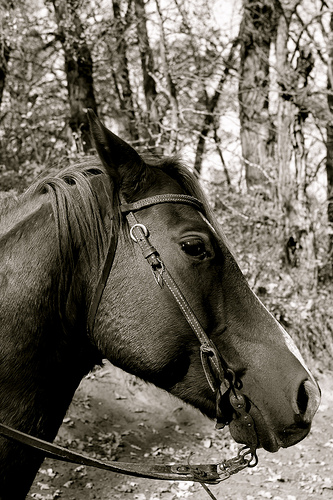 And it was hilarious. Each time Little Sister’s horse would find himself a step behind he would snort and lift his head a bit higher and work on his rider to allow him at least one more step ahead. And so naturally I was tempted to see what would happen if I took off up the hill to catch a snapshot of my favorite people riding toward me. So I did. I rode up the hill ahead of the gang and turned around at the top to find Little Sister and the Red Fury flying up the hill behind me. 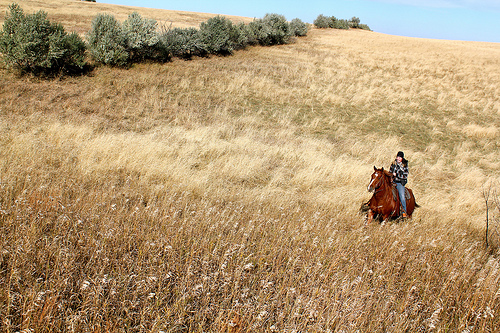 Apparently the Red Fury wasn’t about to allow this, and Little Sister didn’t care. She was along for the ride. The ride which I tried to document up until the part where the space between her ass and the saddle measured about a mile and I was almost certain she was going to be launched.

I think I yelled something like hang on…which is always so helpful in times like these… but Little Sister just squealed and laughed and said she was a bit rusty after sitting in classrooms. 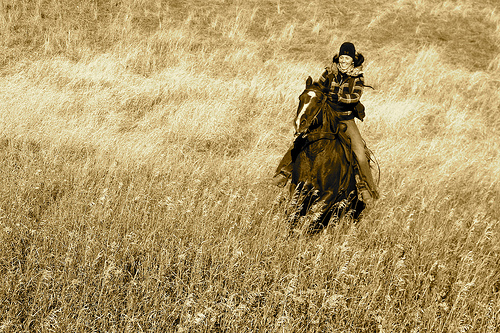 Which brings me to the point of my story, I do have one (besides embarrassing my sister.) I remember growing up here and taking these rides in the fall air, smelling the same smells, and feeling the same... blessed. I remember making a promise to myself not to grow out of this. Not to ever say no to a ride with my father, to a chance to really live out here on these trails. I remember knowing, even at 10 or 12 years old, that I was lucky to have this experience under my belt, even when I had just hit the hard clay ground so hard I couldn’t feel my left arm after being bucked off by my gray mare yet again.

So seeing my Little Sister fly up that hill on a horse that has just as much attitude and free spirit as the woman on his back, I was reminded of that little girl with wild curls on a white pony named Jerry trailing behind me, singing songs to herself, telling me to wait up, getting her beanie hooked on a branch while riding through a trail in the trees, smelling those same smells, feeling the same breeze and promising herself the same things. 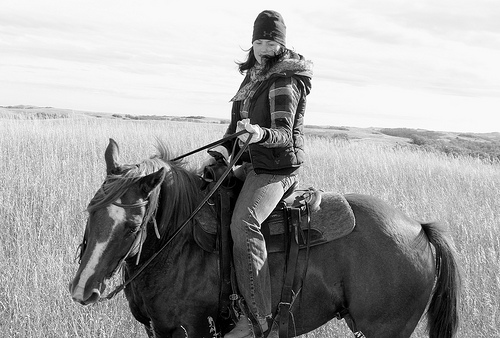 An hour before in the house over pancakes that memory was another life. It was other people in another time with different agendas and thoughts and outfits. But in that moment when Little Sister reached the top of that hill having recovered her balance and her breath, out of my mouth came laughter that was so familiar to me, and out of hers came the same. We were those children again, tucked snug in our puffy coats, cheeks rosy, chattering and riding with pops in our own little world, promising one another, if such a promise can be made, not to grow up. To stay out here just a few moments longer. To run just a little bit faster. To stay together. To remember we are blessed.

And so we rode. We rode with our father, with our other best friend, side by side or tail to nose, or spread out wide over the flat, together under a sky that had decided to shine its sun on us after all.

So if I can’t have a locket to hold these moments with my sister at fingertip reach, or a scarf around my neck that is husband’s strong arms keeping me safe from the world’s worries, or my Pops on a horse forever riding beside me telling me I’m doing fine…

…at least I will always have that promise. The promise to make more moments like these and to always ride horses.

About the Author: Jessie Veeder is a professional folk rock musician with years of experience performing, songwriting and recording. She grew up on a 3,000 acre cattle ranch located on the edge of the badlands in Western North Dakota, The Veeder Ranch, where her great grandfather homesteaded. After years of touring as a musician, she's back home on the ranch, making it into a place that others can eventually visit and escape into nature. Learn more about Jessie, her ranch and her music at www.jessieveedermusic.com and www.veederranch.com.