Time Point is on Her Side, Elder Champions

What’s a 70 year old lady doing riding around on a 21 year old Thoroughbred? Winning championships on the California dressage circuit, for starters.

The pair has been so good they were even featured in a December 2013 Chronicle of the Horse issue about inspiring amateurs, and last weekend learned they won a 7th Place Championship from the DASC Year End Third Level! 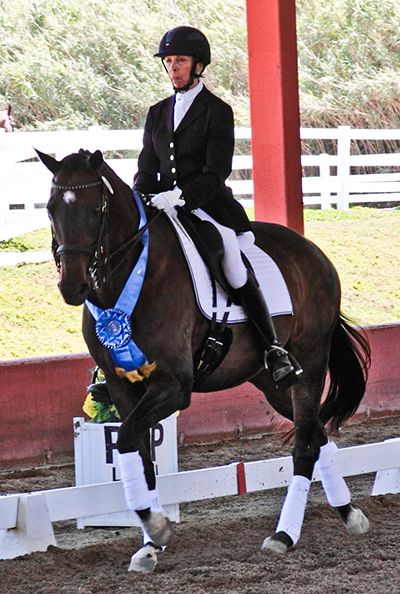 Time Point, 21 and Marilyn Vail, 70, are still going strong as a dressage team in California.

The credit, Vail says, goes entirely to Time Point, her 16.1 hand dark bay who is so good at his job that even in a new “spooky” show ring, he can put in winning moves while scoping his unfamiliar environment for horse-eating monsters!

“Timey, when he’s spooky, can be looking all around, and doing two tempe changes at the same time!” says Vail. “The other day he was really distracted by a big show going on in our barn. He could still do all his fancy work, but he was looking around the entire time … he’s a horse who never says “no.” That’s a Thoroughbred for you.”

Vail bought Time Point in 2010 from Victoria Duffy Hopper, a talented Eventer. After three starts and a single victory in which his race report notes he “dueled gamely to the wire,” he went on to train for eight years with Grand Prix rider and dressage trainer Charles Pinneo.

Just at the point where she swore off horses, the two met.

“Before I met Timey I lost a horse who was very ill for eight months, and nobody could figure it out. He was a lovely Trakehner, and after he died, I was sort of done. I had years of bad luck with horses.”

Her moratorium lasted only until a friend called and suggested she check out Time Point, and soon after “I was back in the saddle again!” she quips.

Though she has put in hours taking lessons with Time Point, she credits their success in the dressage ring to the horse, whose competitive spirit and desire nails every move. “He loves to show. Oh my God, he’s a real perfectionist. I’ve had Warmbloods, but there’s nothing like a Thoroughbred … I just get along with them. They’re so intelligent and the way they work for you” surpasses the ethic of other breeds she has ridden. “He’s so willing.” 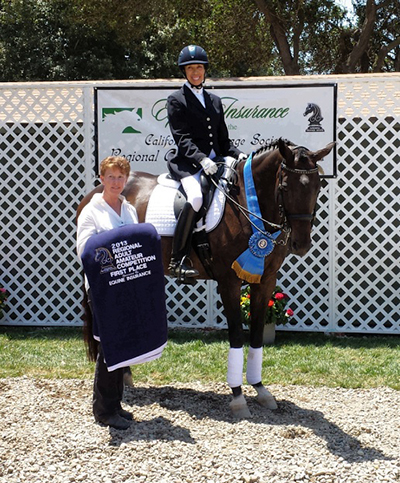 They compete and win against the fanciest Warmbloods.

The oldest pair in the dressage classes, they often find themselves up against powerfully built Warmbloods with amazing gaits, Vail and Timey have helped to prove that the Thoroughbred is just as capable.

“Thoroughbreds can win regionally against imported Warmbloods with Olympic sire pedigrees,” she says.

Though Vail was forced to take a year off after sustaining a broken shoulder in a fall, not from a horse, but from tripping over her dog, she and Timey have been schooling, and are looking forward to more successes in the future.

“I wanted to ride horses my whole life, and I always wanted a horse. But my father said I needed to concentrate on my education first. So I got three degrees and work in the law field.”

She eventually became a horse owner, and four years ago found Timey, the horse of her dreams.

About the author: Susan Salk is the creator of Off-Track Thoroughbreds, a blog dedicated to telling Success Stories of off-track Thoroughbreds who transition into next careers, or retirement. Please consider visiting the blog’s new store, Off-Track Products. Proceeds will help sustain this blog in the future, and go to charity.