A a descendant of the Old English Black Horse from mediaeval times, the Shire is considered a "heavy breed" of horse. Despite standing up to 19 hands or more, it has a very gentle disposition. These horses are strong and big-barreled for pulling, but can also be ridden under saddle. Find out if the Shire is the right horse for you.

Equitrekking interviews Karla Stoner, Vice President of the American Shire Horse Association to learn more about the history of one of the largest horse breeds in the world. 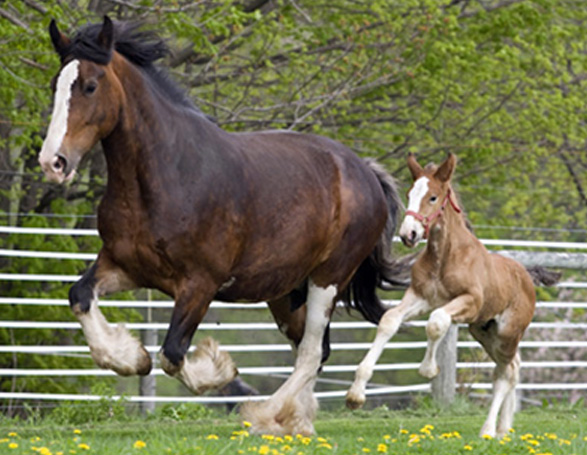 A Shire mare and foal / photo by Barbara Livingston

Raina Paucar for Equitrekking: What are the origins of the Shire?

Karla Stoner: Shires originated in England and like all draft breeds go back to ‘The Great Horse’, a heavy war horse, also called destrier. These horses were bred from cold blooded horses of central Europe around the 11th century and carried knights into battle. They were large with massive hind quarters, but were smaller than the draft breeds that developed from them.

With the decline in need for War Horses to carry knights and the developments in wheeled transportation and agriculture, the need for horses capable of pulling heavy loads led to the development of cart-horses or dray horses, using the Great Horse as the foundation. There is also evidence that in the early 13th century, black Flemish horses with leg feather (Frisians - probably ancestors of Friesians) were imported to England and influenced the development of the Shire breed.

The fen counties of England (Lincolnshire and Cambridgeshire) are generally recognized as the first ‘centers’ of Shire breeding. Shires were first imported to the U.S. in the mid 1800s and the American Shire Horse Association was established in 1885.

Equitrekking: What are the general conformation characteristics of the Shire?

Karla Stoner: Tall (minimum 16.2 hands to over 19 hands) with a head and crest suited to the gender. Neck should be long, slightly arched and well set on for a commanding appearance.

Shoulders should be wide enough to support a collar and sloping, running well into the back. The back should be short and well coupled with the loins. The tail should be well set up (not ‘goose-rumped’) and both head and tail should be carried erect.

Hindquarters and chest should be well muscled. The ribs should be round, deep and well sprung, not flat sided, with a deep girth in proportion to the rest of the body. Leg bone should be clean, flat and heavy with large clean joints. Feet should be moderately deep and wide at the heels, with open coronets. Feather should be fine, straight and silky.

A colorful variety of Shires in a halter class

Equitrekking: How has the Shire been used and ridden throughout history?

Karla Stoner: The Shire breed was developed for pulling heavy loads and farm work and the conformation characteristics that favor these tasks still influence the breed today. Riding draft horses has been a more recent development and has not yet changed the breed characteristics.

Equitrekking: What are some fun facts people may not know about the Shire?

Karla Stoner: Several Shires have held the Guinness book of World Records for the tallest horse, standing over 20 hands in height.

Equitrekking: For what kind of temperament is this breed best known?

Karla Stoner: Shires are generally very people oriented with calm and patient dispositions. They are also very trainable and have an excellent work ethic.

Equitrekking: What style of rider best suits the Shire?

Karla Stoner: Since Shires have been primarily driven to both farm equipment and vehicles, they are excellent driving horses for show or pleasure. They have also become popular as riding horses due to their calm disposition and athletic movement, and are best suited, but not restricted to, the taller or larger rider. Shires are ridden for pleasure, trail, dressage, working cattle, police work, search and rescue work and some have been hunted. Shires crossed with lighter breeds make excellent sport horses, with many having great jumping ability.

Equitrekking: Has the Shire evolved over time?

Karla Stoner: As with all draft horses, mechanization of farm and hauling work has led to more emphasis on the show ring and pleasure use, so there has been some refinement in the breed and more emphasis on height and knee and hock action. However, the basics of the breed remain the same.

A Shire in harness and ready to drive

Equitrekking: What makes the Shire unique as a breed?

Karla Stoner: This can be different things to different people, but the main points are size, strength, character and the distinctive leg feather. 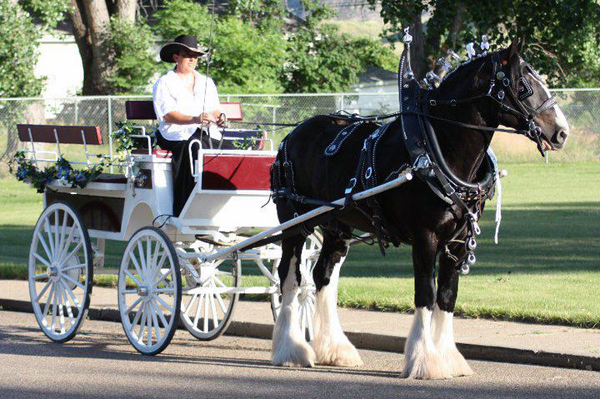 A Shire being driven on the open road

Further resources on the Shire:

The Shire Horse: A History of the Breed, the Society and the Men, by Keith Chivers