Timaeus, writing c. 400 B.C., mentioned the “Fortunate Islands” in a reference to the British Isles’ wealth of tin found during the Bronze Age. No doubt modern-day pony lovers would consider this nickname equally appropriate, given the impressive array of native pony breeds still found there. One of the most ancient of these breeds is England’s Fell Pony, whose native habitat is found high on the peaks of the Pennines -- the mountainous “backbone” that divides northern England.

As one of the native “Mountain and Moorland” ponies of the British Isles, it is named after the “hills”, which are also called “fells”. And with only about 150 Fell ponies in North America and 5000 in the world, the breed is also classified as “endangered”. But don’t count this tough pony out yet -- it has has narrowly escaped extinction more than once, descending from a long line of survivors which go all the way back to the Ice Ages.

When the North American “cradle of the horse” became covered with ice many thousand years ago, the majority of large mammals there went extinct. Fortunately, various types of prehistoric horses traveled northwestward in search of a more favorable environment, crossing the land bridges that once existed between Alaska and Asia at the Bering Straits. Fossil evidence allows us to trace the Ice Age journey of ancient equines, including those representing two types of ponies which lived in Alaska.

These not only strongly resembled fossils found in England, where it appears these prehistoric ponies completed their westward migration, but they also have remarkably similar living prototypes found in England today. One of these ancient types was a smaller, lighter-boned pony, similar to the Exmoor pony. The other was a heavy-boned, larger pony, whose closest living prototype, based on fossil evidence, is probably the Fell pony.


During its migration, this larger prehistoric pony flourished in the vicinity of the cold, boggy forests of central and northwestern Europe which existed at that time. It thus became known as the “Forest-type Horse”, which scientists have variably referred to Equus robustus and Equus caballus sylvaticus. However, based on the earliest fossil remains, it probably only stood around 13.2 hands high, and thus may be more aptly referred to as the “Forest Pony”! It was this northern progenitor pony that likely contributed to the development of many draft breeds, through both selective breeding upward in size and cross-breeding with other taller types.

Thus, the same “Equus robustus” which eventually gave rise to the “Great Horse”, really began with a “Great Pony”! This original “Forest pony” had characteristically short, heavy cannon bones, providing it with the capacity to bear the weight of its small but heavily-built frame. It also had relatively broad feet, which helped to keep it from getting stuck in the swampy ground. Its long, sloping shoulder gave it knee action, which helped it to clear fallen trees and other obstacles without stumbling, and also enabled it to move quickly through the snow while fleeing from Ice Age predators. Its long fetlock hair or “feather”, long forelock, well-furnished mane and tail, and characteristic “beard” provided warmth and facilitated rainwater runoff. It was probably dark-colored – black or brown -- to aid in camouflage around the dark forests and also to help retain heat in the cold environment. 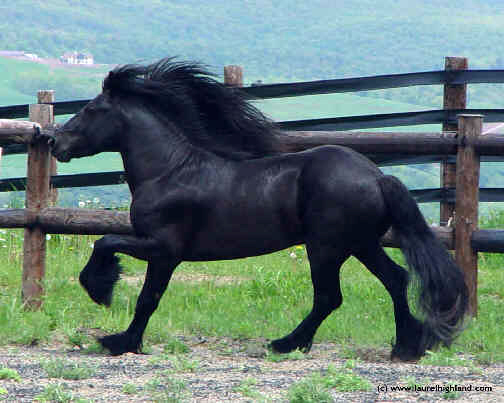 Large, relatively forward-projecting eyes set on a short, broad face provided optimum vision in this environment. Its ears were small and tucked beneath the heavy mane to protect them from the cold. And as they continued their westward migration across the hills and mountains, the same sure-footedness and knee action which had evolved over the forest floor obstacles were also ideal adaptations for rocky terrain, while the broad feet also protected them from getting stuck in rocky crevices.

The Forest pony was particularly abundant in France, where cave men not only feasted on them, but also immortalized them in their Stone Age cave drawings. At that time England and France were connected by a land bridge, so not surprisingly similar remains are found in England as well. Eventually, as humans became smart enough to domesticate the horse, the Forest-type became used as a pack pony. Its short stature, weight-bearing capacity, and slightly longer back made it ideally-suited for this job. Perhaps the first to employ them were the Phoenicians, who sailed to the “Tin Islands”, now known as Britain, in search of precious tin during the Bronze Age.

Later, during the first few centuries A.D. when the Romans occupied Britain, Emperor Hadrian decreed that a wall should be built, stretching across what is now roughly the border between England and Scotland, in order to defend against the northern warrior tribes known as the “Picts”. This wall was built in the vicinity of what is now Cumbria, which also happens to be the home of the Fell pony. Stallions were brought there by Friesian mercenaries in the Roman army during the construction of Hadrian's Wall, and this is the basis for a popular theory about the origin of the Fell pony – that is, the "breed originated by crossing Friesian stallions with native ponies at Hadrian's Wall." However, this explanation for the origin of the Fell pony is surely a myth, because fossils resembling the Fell pony have been found in England dating back to 60,000 B.C. -- long before Caesar ever invaded British shores. Indeed, scientific evidence suggests that a common prehistoric ancestor -- the Forest "pony" -- is the most likely explanation for the resemblances between the modern Fell pony and other breeds, including the modern Friesian.

Other contributions to the foundation stock of the modern Fell pony may have also come from other horses found at the Roman wall, and perhaps still others which passed through northern England over the centuries as a result of both trade and war. However, no matter what outside blood may or may not have contributed, perhaps the greatest influence was, and still is, its rather harsh environment on the fells in Cumbria, where the ponies still run in semi-feral herds today.

Fell ponies have “borne the weight of Cumbria on their backs”, having been used for many centuries as pack ponies. The heavily laden pones traveled in droves with one pony and its rider guiding the rest along established routes. Their remarkable strength and endurance allowed them to carry packs weighing more than 200 pounds over rough, hilly terrain, where they travelled more than 200 miles per week. Old packways still found throughout England are a visible reminder of the ponies that carried loads throughout the centuries. Back then, Fells were known as “Fell Galloways” or just “Galloways”, whose legendary strength and stamina were praised by both Shakespeare and Sir Walter Scott in their works.

They also achieved fame as fast trotters at the shepherd’s meets and other Lakeland gatherings. Ironically, their hardiness, strength and usefulness almost brought the breed to extinction in the 20th century when they were sold in droves to the army to pull and pack artillery throughout World Wars I and II.

Unfortunately, this left few Fell stallions behind. With mechanization, tractors and cars replaced them on farms, and many more ended up being sold for meat. Fortunately, the development of the leisure industry in the 1950’s and 60’s gave them a new lease on life. Like other native breeds, the versatile Fell pony rose to the task and was able to adapt to this new market for an all-around sport pony.

The Fell pony is a versatile, sure-footed, larger-type pony that stands 14 hands or less and is used for riding, driving and jumping by both children and adults alike. For older children, the Fell pony is ideal, because it is a pony they will never outgrow! Although the Fell is most commonly black, it is sometimes bay, brown or grey, with a long mane and tail, luxurious "feather", and well-balanced knee and hock action.

It is also well known for its stamina and wonderfully docile temperament, and is thus frequently used in programs for riding and driving by the disabled. And since the Fell pony breeds very true to type, it is usually very easy to find matched pairs for driving. Indeed, it comes as no surprise to Fell enthusiasts that the Duke of Edinburgh, despite having his pick of all the many other native pony breeds, drives Her Majesty Queen Elizabeth II's team of Fells regularly in combined driving competition. Fell ponies are also used for both pony trekking and deerstalking at Balmoral Castle, Her Majesty’s estate in Scotland.

© Mary Jean Gould-Earley, 2005. No part of this document may be reproduced or without permission from the author.

Mary Jean Gould-Earley is a Radiologist and Fell Pony breeder.