The Andalusian and Lusitano Breed Profile

"For ages, Andalusians and Lusitanos have been prized for their athleticism, intelligence and beauty."

You may have spotted these horses in famous works of art or present day Hollywood films, including The Lord of the Rings and Braveheart. Their beauty, intelligence and strength has been an inspiration throughout history. Equitrekking interviews Julie Alonzo, President of the International Andalusian and Lusitano Horse Association (IALHA) to learn about Andalusians and Lusitanos. 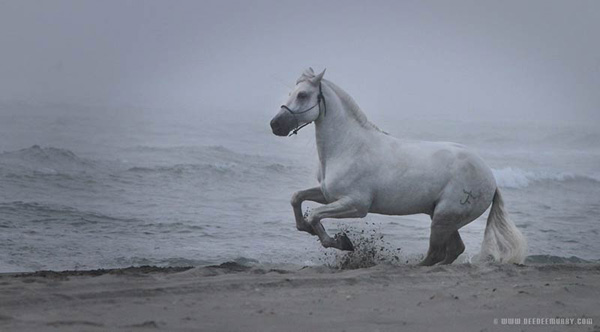 Raina Paucar for Equitrekking: What are the origins of the Andalusian and Lusitano?

Julie Alonzo: The Andalusian and Lusitano trace their roots back many thousands of years, to a time when the Iberian Peninsula was known by the name “Andaluz,” centuries before the countries of Spain and Portugal formed as independent nations. Cave drawings in the region, dating back to 30,000 BC, show horses with the strong profile, so recognizable in the breed even today.

These horses, which have been featured in paintings and statues across the centuries, are easy to recognize for their convex or sub-convex facial features, prominently arched necks, compact bodies, and distinctive high-stepping movement. The term “Andalusian” can refer to horses of both Spanish and Portuguese descent, as well as to purebred horses who can trace their ancestry to the studbooks of both Spain and Portugual. In modern times, one will sometimes hear the term P.R.E. (for Pure Spanish Horse or Pura Raza Española) used to refer to horses whose ancestry traces back entirely to the Spanish studbook and Lusitano (for Puro Sangue Lusitano, or PSL) used to refer to horses who trace their roots entirely back to the Lusitano studbook in Portugal.

For ages, Andalusians and Lusitanos have been prized for their athleticism, intelligence and beauty. 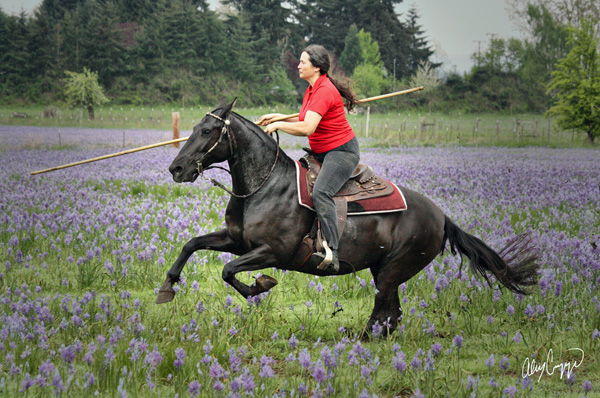 Equitrekking: What are the general conformation characteristics of the Andalusian and Lusitano?

Julie Alonzo: The Andalusian’s and Lusitano’s physical appearance and flashy action make them some of the world’s most desirable riding horses. The Andalusian and Lusitano are strongly built, yet extremely elegant. The typical Andalusian/Lusitano stands 15.2 to 16.2 hands. The head is of medium length, rectangular and lean. The head in profile is slightly convex or straight with well-placed ears, moderately narrow and without excess flesh. The eyes are alive, almond-shaped, and placed within an orbital arch. The neck is reasonably long, broad, yet elegant and well crested in stallions, straighter in mares.

The mane is thick and abundant. Well-defined withers precede a short back; the quarters are broad and strong. The croup is rounded and of medium length. The tail is abundant, set low, and lies tightly against the body. The majority of Andalusians/Lusitanos are gray or white, but you will also see blacks, bays, chestnut, palomino and buckskins.

Andalusians / Lusitanos are well-known for their trainability and lightness under saddle. Extraordinary athletes, they enjoy learning. Many Andalusian and Lusitano enthusiasts comment that they are first attracted to the breed by its beauty but become hooked by the horses’ eagerness to work and intelligence. 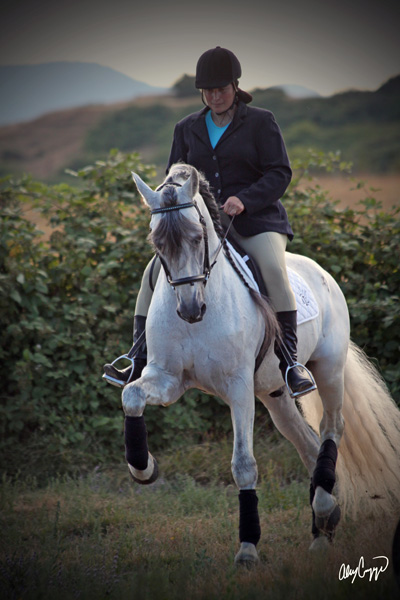 Equitrekking: How has the Andalusian and Lusitano been used/ ridden throughout history?

Julie Alonzo: The Andalusian/Lusitano has been esteemed for its quality and appearance since Roman times. In the Middle Ages, it carried knights into battle and later became a treasured mount of European nobles. Horsemen soon realized that the same qualities that made the Andalusian/Lusitano a versatile war horse could serve in times of peace as well. The horse soon became the favorite of the grand riding academies of Europe because of its impulsion, collection, forward motion, and agility. It was at these academies where dressage and high school riding began and flourished. The breeds’ agility, courage, and trainability made them a favorite for mounted bull fighting.

Equitrekking: What are some fun facts people may not know about the Andalusian and Lusitano?

Julie Alonzo: USC’s mascot Traveler® is an Andalusian horse. Andalusians/Lusitanos have also been featured in numerous popular movies including The Lord of the Rings series, LadyHawke, Braveheart, and The Three Musketeers.

Young Andalusians and Lusitanos are sometimes laughingly referred to as “ugly ducklings who grow up to become beautiful swans” in recognition of the breeds’ slow maturation. As yearlings and two-year-olds, Andalusians and Lusitanos typically do not yet show the awe-inspiring beauty that they will display as adults. It is not uncommon for new-comers to the breed not to believe that a youngster is a purebred or that it can possibly grow up to resemble its glorious parents. When they see photos of that horse as an adult, however, they soon change their tune! 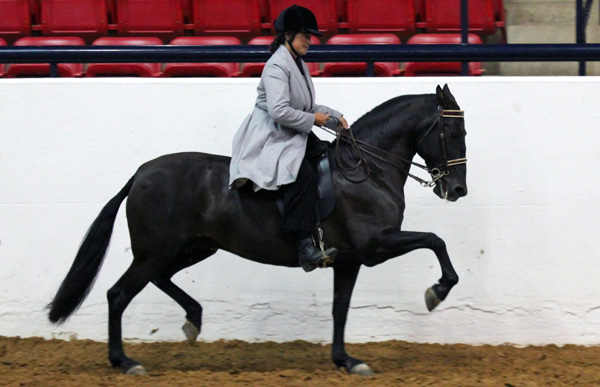 Julie Alonzo: Andalusians and Lusitanos are known for their sensitivity and desire to please. They give their hearts in all that they do and have very long memories. The stallions have been bred for centuries to be sensible and easy to work with.

Equitrekking: What style of rider best suits the Andalusian and Lusitano?

Julie Alonzo: Andalusians and Lusitanos thrive in partnership with their handlers. They quickly learn to accommodate their riders’ needs and idiosyncrasies. Intelligent and sensitive, they are suitable for riders who enjoy a deep connection with their mounts.

Equitrekking: Has the Andalusian and Lusitano evolved over time?

Julie Alonzo: Thanks in large part to strict adherence to classical breed standards, the Andalusian and Lusitano are very similar today to their historic roots, although recent trends do seem to be producing horses that are slightly taller. 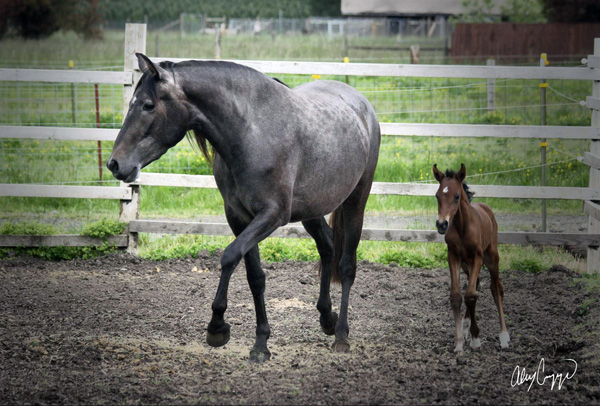 An Andalusian mare and her foal / Photo Credit Panoramic Artistry

Julie Alonzo: Andalusians and Lusitanos have featured prominently in history. Many of the statues of nobility and military heroes capture distinctively Andalusian/Lusitano characteristics and are easily recognizable to anyone familiar with the breed.

Babieca, the famous warhorse who carried Rodrigo Díaz de Vivar (El Cid) to his many victories in the 11th Century, was an Andalusian.

The Conquistadors brought Andalusians/Lusitanos with them to the New World in the 16th Century, and these horses have influenced many of the most popular breeds in North America, including the Quarter Horse, the Morgan, and the Welsh pony.

More recently, the dressage champion Fuego de Cardenas has gathered a large fan base with his breath-taking musical freestyle performances in the 2010 World Equestrian Games and the 2012 Olympics. 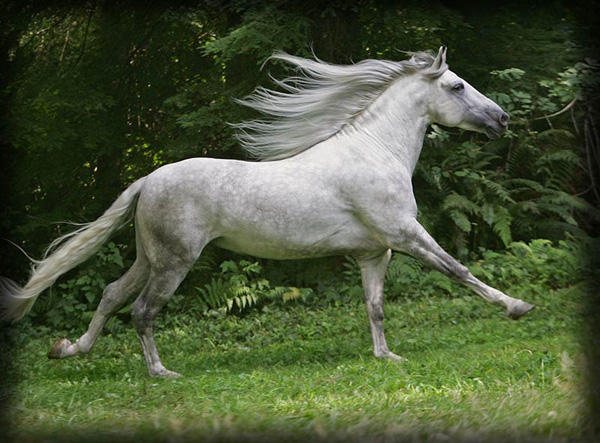 Equitrekking: What makes the Andalusian and Lusitano unique as a breed?

Julie Alonzo: Incredible athleticism, extreme trainability, great beauty, and smooth but dramatic action all contribute to the Andalusian / Lusitano’s popularity. These horses, often referred to as Royal Horses, in acknowledgment of their history as mounts of kings and the nobility, make incredible partners.

Further resources on the Andalusian and Lusitano: