Horse lovers with allergies... take heart! We've found a horse for you. Distinctive for its curly coat, the American Bashkir Curly Horse is hypoallergenic for most people. Used in competitive and classical dressage, hunter, jumper, eventing, combined driving, and in the western disciplines of barrels, reining, gymkhana, and Western pleasure, these are hardy, versatile horses. Prized for their unflappable calmness and gentle disposition, read on to find out about their mysterious origins and if the American Bashkir Curly Horse is the right breed for you!

Carol Baldwin, a board member of the American Bashkir Curly Horse Registry tells us more about this interesting horse breed. 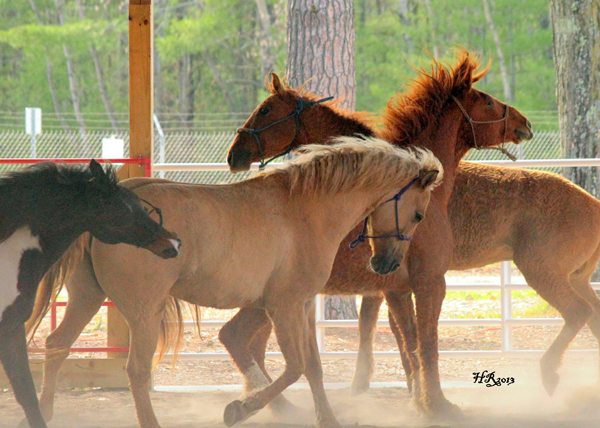 Raina Paucar for Equitrekking: What is your background with American Bashkir Curly Horses?

Carol Ann Baldwin: Our small horse farm is located in Northern Michigan. After retiring from education in 2002,  we knew horses were going to be in our future. We purchased three young Curlies in 2005–– CDCH Diamond Ron, CDCH Sioux Warrior and CDCH Dutch Treat–– and the adventure began. In 2007 another Curly, JL Phantom, was added to the herd. The Rocking B Ranch expanded to include more room and another stall. We have never looked back. Even though formal riding lessons did not start until our late 50‘s, we just want everyone to know that it is never too late to learn how to ride–enjoy and love the majestic American Bashkir Curly Horse. 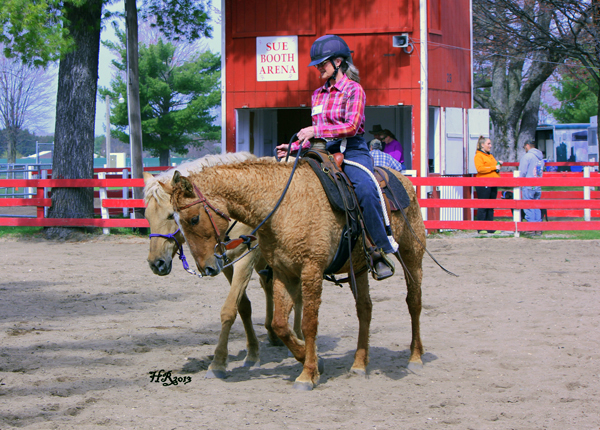 Equitrekking: What are the origins of the American Bashkir Curly Horse?

Carol Ann Baldwin: The exact origin of the Bashkir Curly Horse is one of the greatest mysteries of the horse world. However, DNA technology has afforded the horse world a better understanding of the Curly. Research done at UC Davis was able to identify that some of the genetic markers of the Curly can be traced to the distinct breeds of the Quarter Horse and the Morgan. Other rare and unusual Curly horse traits that emerged from the UC research are found only in feral horses or in those breeds based on the feral herds.

The development of the modern American Bashkir Curly is well understood and documented. The modern day history of the American Bashkir Curly dates back to 1898 and the Damele (Duh-mel’ly) family. At that time in 1898, young Peter Damele and his father were riding in a remote mountain range in Central Nevada. Peter, who passed away in 1981 at the age of 90, could vividly recall the strange sight they saw of three horses with tight curly ringlets over their entire bodies.

The father and son team was intrigued by the strange horses. They wondered where they came from and why they were wandering in the Peter Hanson mountain range. Strange or not, since that day in 1898 there were always curly coated horses on the Damele range. Then in 1932 the Great Basin was hit by an extremely harsh winter. Most of the domestic stock and wild horses either starved or froze to death. In the Spring when the horses were rounded up on the Damele range, among the few survivors were the Curlies. It became very apparent to the Dameles that these horses had special features which enabled them to survive. The Dameles bred the surviving Curlies with other horses and many Curly foals were delivered. In 1942, the Dameles moved to Dry Creek Ranch in Nevada. In 1952 another severe winter storm developed and all the horses who did not receive supplemental feedings died except a Curly colt named Cooper D and four Curly mares.

Dry Creek Ranch is the ranch associated with the breeding of the first Curly horses. Copper D was the first Curly stallion used by the Dameles for breeding. Later the Curly mares were bred to the Arabian stallion named Nevada Red and to a Morgan stallion called Ruby Red King. Other breeds used for breeding the Curlies were Appaloosa, Quarter Horse, Saddlebred and Draft. For many years, the Damele’s continued to breed Curly horses for ranch work. Not only were the Curlies survivors but they were gentle, intelligent and able to work cows. Many of the American Bashkir Curly horses in the United States can be traced back to the Damele herd. 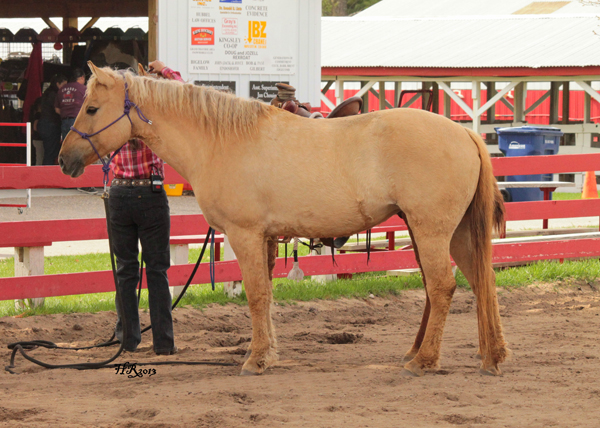 Equitrekking: What are the general conformation characteristics of the American Bashkir Curly Horse?

Carol Ann Baldwin: Bashkir Curlies appear in all colors from standard bays, blacks and grays, to Appaloosa markings: from pinto patterns to dilute colors such as buckskin, roan, grulla and cremello. They are generally of medium size, 13.3 to 16 hands. Their conformation resembles the early day Morgan horses.

The hooves of the Bashkir Curly are very substantial. Under normal circumstances, Curlies do not wear horse shoes. Regular trimming maintains the tough, reliable traits of the hoof.

The cannon bones are stout and round. The legs are straight and move straight with flat knees and exceptionally strong hocks. Their short back indicates five lumbar vertebrae plus a round rump without crease or dimple. The powerful shoulder area surrounds a V’d chest and round barrel.

Equitrekking: How has the American Bashkir Curly Horse been used and ridden throughout history?

Carol Ann Baldwin: There is evidence that the American Indians rode the Curly horse. The Curly has been seen in Native American drawings. As mentioned previously, the Damele family used the horses for ranch and cow work and the Curly proved to be an extremely hardy horse, surviving the worst of winter weather conditions. Today the breed participates in all equestrian disciplines. Curlies have also been bred with Missouri Fox Trotters to produce gaited Curlies. 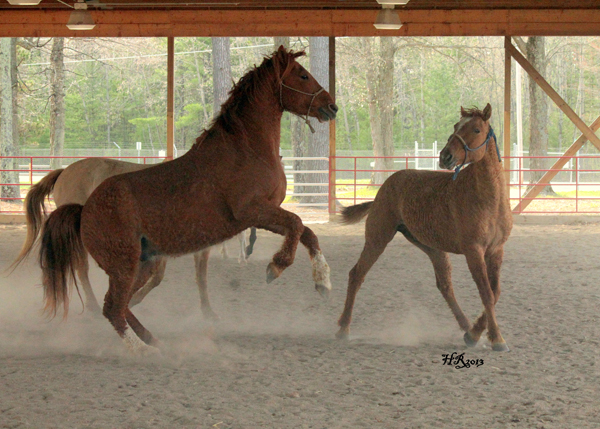 Equitrekking: What are some fun facts people may not know about the American Bashkir Curly Horse?

Carol Ann Baldwin: The most amazing trait in the Curly horse is their hypoallergenic coat. The hair of the Curly horse lack proteins that are responsible for the allergic reactions experienced by some people. The reactions can include hives, wheezing, itchy eyes, shortness of breath and congestion to name a few examples. Horse lovers who have horse allergies have found their dreams of owning, riding, caring for and grooming their own horse can happen with the hypoallergenic Curly horse! In addition, the hair shaft of the Curly is round as opposed to flat, making it very similar to mohair. Curly horse hair can be spun and used to make beautiful hypoallergenic scarves, sweaters and other garments

One especially interesting feature of the breed is the fact that they can completely shed out their mane hair and/or the tail hair each summer only to grow it back over the winter months. Even though the mane hair is usually extremely fine and soft, it is quite kinky, resembling dreadlock curls. This ability to shed the mane may be nature’s way of coping with the dreadlock curls, as it would be a challenge to manage if the mane became matted through years of growth.

Some Curlies, known as extreme Curlies, have essentially neither mane nor tail hair. Other Curlies may not shed either their mane or tail at any time or they may shed just the mane and not the tail. Losing mane and tail hair varies from horse to horse. However, the winter body hair of the Curly sheds out in the summer and the body hair becomes wavy or fairly straight. However, for many Curlies during the summer, curly hair is maintained in the ears and on the back of the fetlocks. In the fall, the winter coat returns. Several patterns of winter coat have been observed from a crushed velvet effect, to a perfect Marcel wave, to extremely tight ringlets over the entire body. The tight ringlets are referred to as micro-curl. 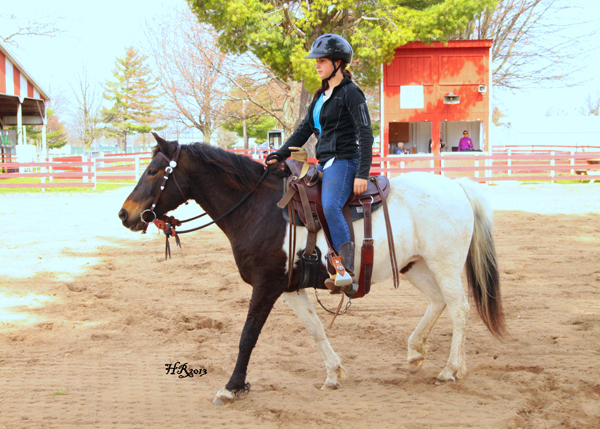 Carol Ann Baldwin: They are very versatile and have the heart, endurance and physical build to compete in many of today’s disciplines. Their athletic ability can be seen in everything from the dressage ring to cow work on a large ranch out West. In recent years the Bashkir Curly has performed well in a wide range of equestrian events including Barrel Racing, Pole Bending, Western Riding, Reining, Hunter, Jumper, Roping, English Equitation, Western Pleasure, Gaited Pleasure, Competitive and Endurance Trail Riding, Dressage and Driving.

About 10% of today’s Curlies are gaited horses. Back in the 1970s when Curly horse numbers were extremely small, out crossing was necessary and encouraged. During that time the Curly horse was crossbred with Fox Trotters and mustangs from the herds in Nevada. Many of the horses in the mustang herds had Spanish ancestry and carried traits found in the Paso Fino. The type of gait a Curly horse exhibits depends on his/her heritage. There are several gaits that have been identified including the Fox Trotter gait, the running walk, a stepping pace, a single foot and the Indian Shuffle which is a balance between a walk and a trot.

Equitrekking: Has the American Bashkir Curly Horse evolved over time?

Carol Ann Baldwin: Yes. DNA evidence links the Curly to feral and mustang herds. DNA evidence also supports a genetic link to the Spanish horses and the Paso Fino. A pivotal point in the American Bashkir Curly Horse history took place in 1971 when the American Bashkir Curly Horse Registry was established. The founders of the registry, Sunny Martin and Benny Damele, set out to save the Curly horses from extinction in the United States. It was found that too many of them, through ignorance, were being slaughtered. Starting with a small number of Curlies, the Registry with the help of Curly owners across the United States began listing characteristics of the unique American Bashkir Curly and a major effort began which resulted in the preservation of this unique breed. Today, there are approximately 4000 registered Curly horses worldwide. 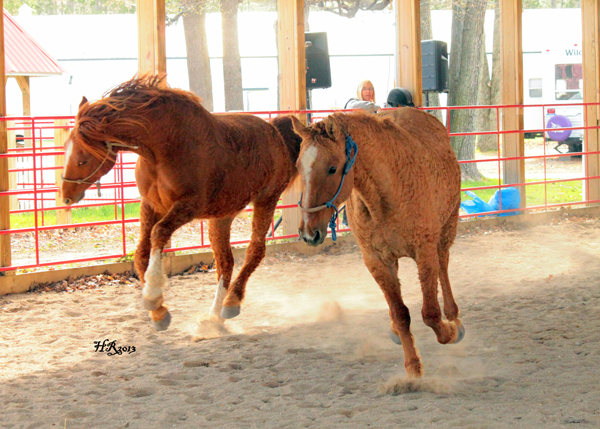