The Mysteries of Wild Horses

Equine photographer Lara Joy Brynildssen reflects on the mysterious behaviors of horses in the wild.

Being both a horse person and a photographer, I spend a lot of time traveling and photographing wild horses. In the last 12 months I’ve made a point of visiting many of the coastal and island herds in North America. I’ve traveled as far north as Sable Island, a tiny crescent of sand 100 miles off the coast of Nova Scotia, and as far south as Cumberland Island, Georgia, a bit of wilderness owned by the Carnegie family, and now a national park. Not wanting to neglect the west coast herds, I schedule regular visits to Utah, Nevada and Arizona too. There is something about wild horses – something mysterious and indefinable, while also familiar and comforting – that draws me back to them every few months. 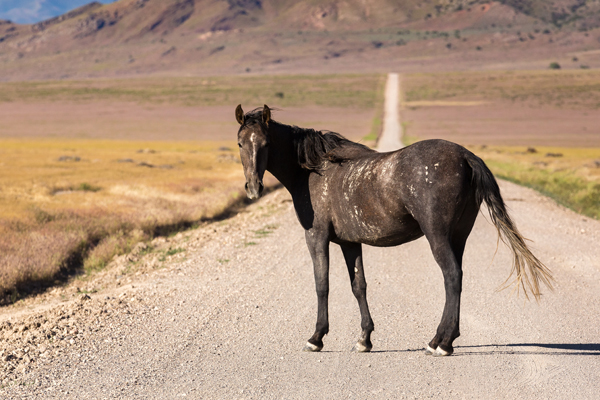 Each wild herd is unique with specific behaviors and appearances as well as its own story of how the horses within it came to be wild. The Sable Island horses are descended from Scandinavian stock. Romantically told, they are survivors of shipwrecks. Realistically, they were brought by early settlers and left behind as those same settlers died, or moved their families to gentler climates. The story of our western wild horses is more complicated but many arrived with the Spanish conquistadors. 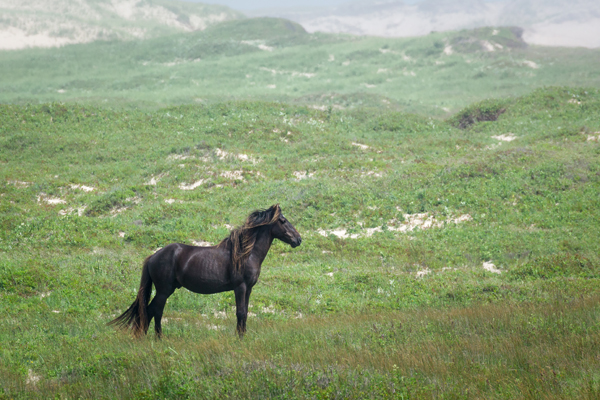 On Sable Island, the horses are more thickly furred than the wild horses of the western United States. Even through the early summer they sport heavy coats and glorious long, shaggy manes. This past June, on Sable Island, I saw the kindest stallion I have ever seen, grooming and nuzzling every member of his band, and spending the rest of the afternoon grazing with his small, fuzzy foal by his side. Stallions typically don’t nurture in quite this way and it is a mystery of genetics – or environment – that this stallion did. 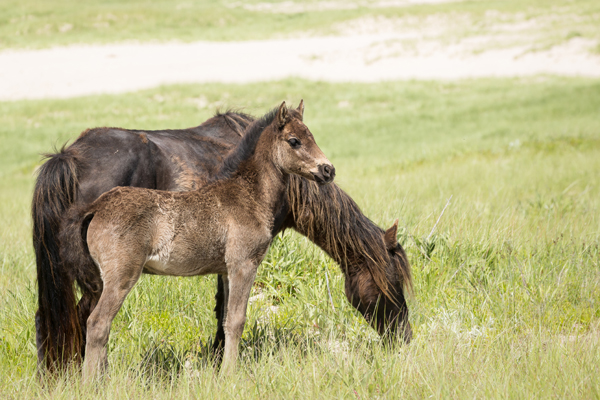 Back in January, in the Tonto National Forest in Arizona, I saw a sleek, well-muscled, chestnut stallion lift his head, whinny and then stride through the shallow waters of the Salt River towards a bachelor stallion. Get ready, get ready, I told myself; this is going to be spectacular. I expected a clash of dominant stallions complete with dramatic rearing and arcs of splashing water. Instead, the chestnut circled the younger white stallion, they nuzzled, and then, haunches touching, both dropped their heads and companionably ate eelgrass for the rest of the afternoon. I’m guessing that the white stallion was the son of the chestnut stallion though typically, even with blood ties, stallions don’t have cozy tête-à-têtes. They are hard-wired to fight for dominance, and to protect their family bands. Their friendly behavior is a wild horse mystery. 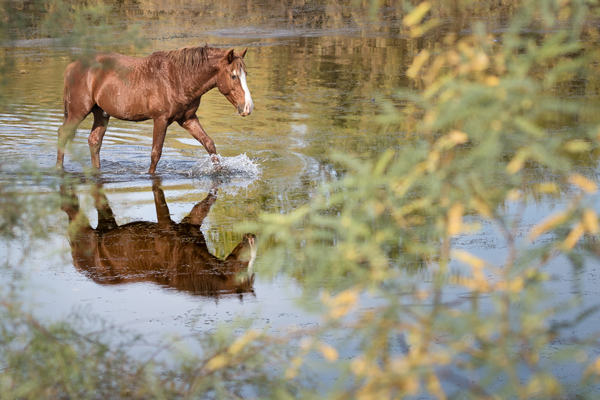 Most days, after hours of driving and hiking, swatting away bugs and bandaging blisters, I find groups of horses that literally do nothing but graze. It is a peaceful afternoon, full of contemplation, to just sit and watch a wild herd graze. I realize how rare it is to have witnessed those paternal moments with the sweet-tempered Sable Island and Salt River stallions. It’s humbling to have studied wild horses in books but to discover in the field just how much more there is to learn by observing them. 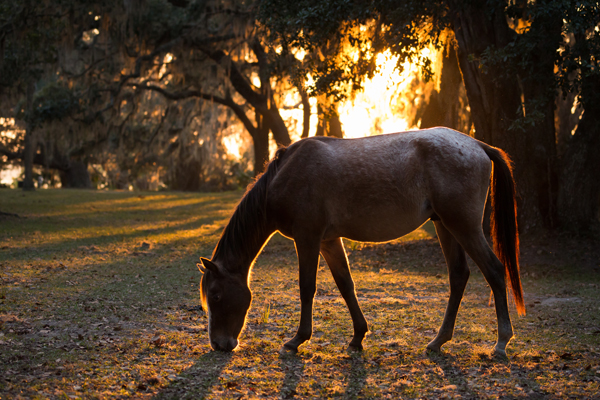 Photographing the riddles of wild horse behavior keeps me coming back to the horse ranges time after time, but just being in their presence is no less of a draw. Their sun-baked smell and soft whickers always make my day brighter – and that’s a conundrum too. Why do horses have such a positive effect on us humans? What continually draws us to them? After all my trips to the wild horse ranges, I still can’t answer that. What I can do is recommend that you head on out to the wild horse range and find out for yourself. 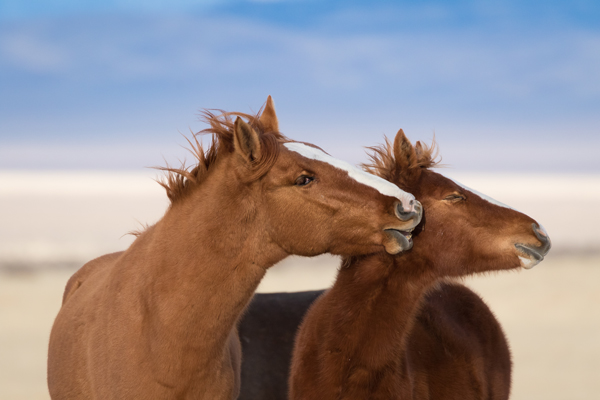 A few ideas on where to go:
• Rent a bike, take the ferry to Cumberland Island, and spend the day cycling and seeking the wild horses.
• Buy a Tonto Pass and cruise down Bush Highway, outside of Mesa, Arizona. Hike the different recreation areas and keep your eyes peeled for the wild bands along the banks of the Salt River.
• Drive about 2 hours outside of Salt Lake City, Utah to the Onaqui HMA near Dugway, Utah to see two of the most beautiful and popular herds in the United States.
• Treat yourself to a Northern Atlantic cruise and head to Sable Island.
• Get out of Vegas and head to northern Nevada to see the mustangs near Ely, in the Antelope Valley and Antelope HMAs.
• Take a boat cruise around Chincoteague Island, VA and photograph the ponies made famous by Marguerite Henry’s book, Misty of Chincoteague.

Good luck, stay safe, and keep me posted on the wild horses you visit and any mysterious behaviors they show you… 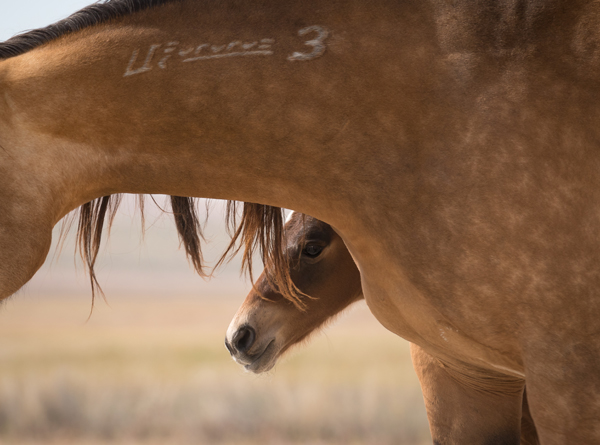 
About the author: Lara Joy is an avid equine, wildlife, nature and travel photographer. She is crazy about her two cats, loves her new Canon 5D Mark IV, and never refuses a sip of limoncello. More seriously, she is working on several series of wild horse images, writes about and teaches photography and exhibits her work in the Chicagoland area. Read more at www.LaraJoy.us. Follow Lara Joy on social media! Instagram: @larajoyphoto @wildhorsephotographycollective Facebook: Lara Joy Brynildssen Photography