Learn about the history of Brown's Ranch and how this place will be preserved for future generations, enjoyed and appreciated and the Brown's Ranch Trailhead, which provides access to a network of trails in the northern region of Scottsdale’s McDowell Sonoran Preserve.

Over the ages, many people have inhabited the western slopes of the McDowell Mountains in Arizona— ancient man, the Hohokam and Yavapai peoples, and the U.S. Army.  Back in the 1880's most of North Scottsdale was inhabited by wild animals and cactus. Water was the crucial test of success in farming or cattle ranching. The only source of water in North Scottsdale was a perpetual spring in the McDowell Mountains, which then as now, flowed at three gallons a minute. There were a few scattered cattle ranches, and it was all open range. 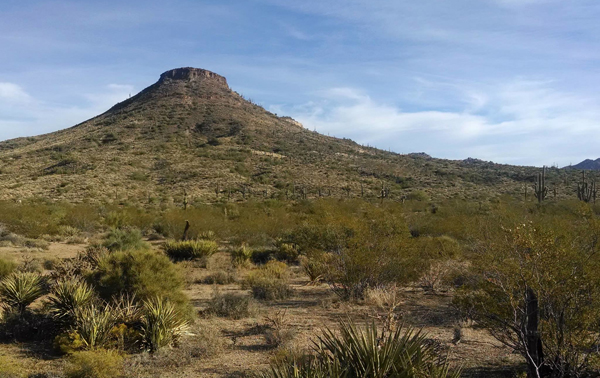 Brown’s Ranch Trailhead provides parking and support amenities for public access to the extensive network of trails in the northern region of Scottsdale’s McDowell Sonoran Preserve.

1885 -- "DC" brand is registered. Enter Dr. W. B. Crosby. Crosby purchased a tract of land and in 1885, registered the "DC" brand, and began feeding cattle brought from Mexico. These cattle were brought to Mexico by the Spanish in the 1500's and were kin to the fighting bulls in Spain. While the meat was tough and stringy, this sturdy cattle breed thrived in the harsh terrain and climate of Arizona.

Edwin Orpheus (E.O.) Brown and his wife, Mary Jane Coldwell Brown were the first Browns to set foot in Arizona. They came to Scottsdale in 1904 at the request of Mary Jane’s sister, Sarah Thomas. Sarah and her husband had arrived from Illinois in 1899, seeking treatment for tuberculosis. Sarah’s husband died in 1902, and she used his insurance check to buy a post office and general store. Her store catered to ranchers, who often brought in their wagons for a year’s supplies. The store sold items ranging from Indian baskets to windmills.

When Sara Thomas succumbed in 1913, she left her land and store to E.O. and Mary Jane and asked them to raise her two surviving children, Grace Ellen and George Thomas. The two were added to the family and raised along with the Brown’s four children, Alvin, Elsworth Edwin (E.E., who became known as Brownie), Benton Russell, and daughter Ruth. The close–knit Brown clan has ever since carried on their tradition of family taking care of family. 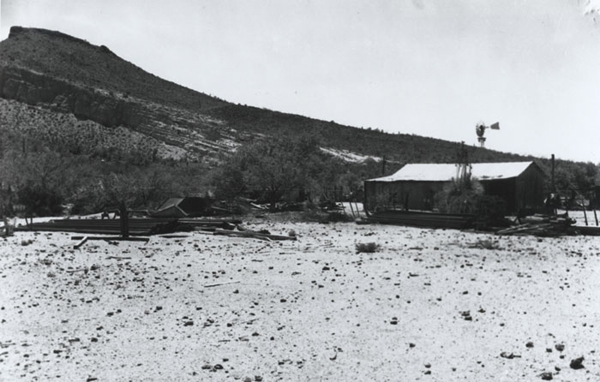 A view of the Brown's DC ranch house and yard, established 1916 by E. O. Brown. Brown's mountain is on the left. Now a part of the McDowell Sonoran Preserve.
Photo credit Scottsdale Public Library.

E.O. was a highly respected member of the community. He was responsible for much of the early development in Scottsdale. He served as postmaster, school trustee, and irrigation director. He was vice president of Western Oil Company, president of the Scottsdale Cotton Gin Company, and controlling stockholder of Farmer’s State Bank of Scottsdale. He also owned the water works and local ice plant. To supply water to the town, he drilled several wells and also brought water from the filtration plant on the Verde River. Downtown’s Brown Avenue is named in his honor for his many contributions to the young city of Scottsdale. 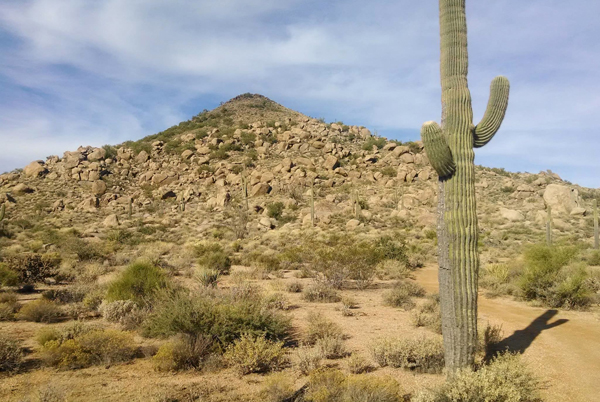 The views from Brown Ranch Trail in Arizona.

He began to purchase land, including DC Ranch, in the northeast section of Maricopa County at the base of the McDowell Mountains. He also homesteaded some of the land and acquired land from other homesteaders to whom he had extended credit. During the dry years, when homesteaders couldn't make a living, they paid off their debts in range land and left the area.

According to laws at the time, a homesteader could claim up to 320 acres of stock-raising land if they paid the required government fees and after five years could demonstrate that they had made "improvements" to the property. In the 1920s, E.O. built a home with wooden floors. The home was basic but a big step up from the usual "claim shacks," which were little more than four thin walls and a leaky roof. The house became the family’s summer retreat. The homestead was close to a spring, which he eventually purchased, that pumped three gallons of water a minute, assuring a source of water in dry years. Their garden was an oasis. He shipped his first load of cattle to California in 1910.

Over time, the ranch grew to 44,000 acres. 23,000 acres were deeded and the remainder was state and federal leased land. It was referred to as the Lower Ranch, which ran from Pinnacle Peak Road south to Shea, and the Upper Ranch, which stretched north from Pinnacle Peak Road for about six miles. The western boundary was Scottsdale Road. The eastern edge rose up to the summit of the McDowell Mountains. The Lower Ranch had the spring, but the Upper Ranch’s more favorable grazing conditions made it the hub of cattle operations. 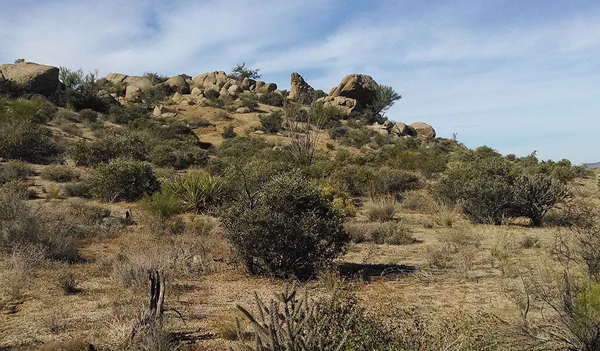 Life on the ranch was rugged and solitary, except during roundups. Cowboys came from all around to be part of the roundup. Meals on the ranch were prepared by legendary cook "Chicken Henry." The cowboys’ breakfast was usually a stale biscuit and some beef jerky before riding out, and lunch was another fistful of beef jerky consumed while on the range. In the evenings when all the cowboys came in, they shared a communal dinner.

E.O. recalls times when, too young to take part in the roundup, he would spend the day at the house helping Chicken Henry rustle up the evening meal. Chicken Henry would give E.O. a big pan full of jerky. E.O’s job was to pound it to a pulp, which they used as the base for jerky gravy. The rich gravy was poured over the biscuits and beans. "I can still taste that gravy," E.O. said. They finished off their meals with peach cobbler for dessert.

Cowboys rounded up the cattle and divided them into two groups: those who went to feeding pastures in California to fatten up and those who went to slaughter. Following the roundup and branding, the family and cowhands led the cattle south. They kicked up huge clouds of dust as they meandered down then unpaved Scottsdale and Pima roads. People stopped to watch as the parade of cowboys, cattle and horses passed by. It took two or three days to travel between the stockyards downtown and the ranch, depending on the weather and size of the herd. Not all the cattle survived the hot, dusty and dry trip. Occasionally, a steer would fall over dead from dehydration.

E.O. Brown died, after a long illness in October 1937, after many contributions to the development of Scottsdale.

The next generation at the Brown Ranch

His son, E.E. "Brownie as he became known, was born in 1901. Brownie epitomized the typical early cowboy. Many thought John Wayne copied Brownie as his model for the American cowboy. Tall, rangy and dark-haired, he like to work the ranch and could ride and rope with the best of them. He was a great hunter and often taciturn, and his Colt .45 which he constantly wore discouraged and settled many arguments. He was an extremely tall man on a huge horse that roamed the range constantly. He built a new, two room, home made of bricks with a wood stove and a fireplace and moved in with his wife, Goldie.

Brownie took over the ranch operations and continued to purchase land after the death of his father in 1937. Eventually, he brought his cousin, George Thomas, to take over the operations of the ranch. This included butchering cattle, shoeing horses at the ranch blacksmith shop, jerking beef and treating animals that were tangled with jumping cholla thorns. At that time, the ranch extended from Bell Road to north of Dynamite and ran from Pima Road east to the McDowells. It was during this period that he was appointed a Maricopa County deputy sheriff. 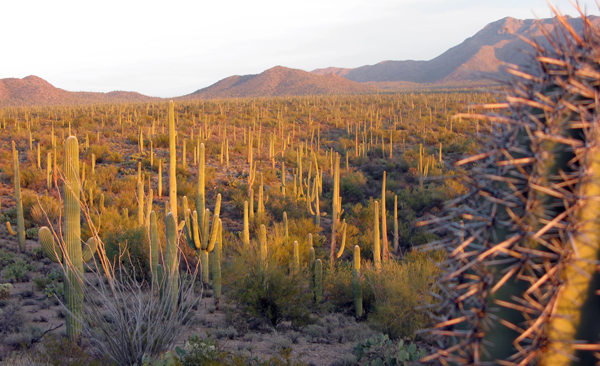 With the piping of the spring throughout the ranch, they were able to run over 4,000 head of cattle. At this time, several wells were dug and windmills were built to pump the water. Pipes were installed to carry water to holding tanks. Some of the watering troughs can be seen today, just east of Pima Road. Even in those days there were drive-by shootings of the windmills and pipes. Cowboys patrolled the pipes and several interlopers were shot and killed. No prosecution of the cowboys took place. This was the West.

Ranching technology changed, and Brownie introduced some of the first purebred Brahmans in Arizona, plus Herefords and Bridled Longhorns from Mexico. The advent of automobiles and trucks ended most of the cattle drives. No longer were cattle bought by the head, but by the pound.

The story ends with Brownie's death in October 1966, and the death of Goldie Brown in the 1990s. The land that Brownie owned was split up between his heirs and eventually purchased by Kemper Marley, then sold.

It is Brown’s northern ranch that the Brown’s Ranch Trailhead is located. The trailhead provides parking and support amenities for public access to the extensive network of trails in the northern region of Scottsdale’s McDowell Sonoran Preserve. It will be preserved for future generations, enjoyed and appreciated.

About the Author: Lynn Kelley is passionate about riding and about Mangalarga Marchador horses, the ultimate Brazilian Saddle Horse. Lynn and husband John own and operate Summerwind Marchadors and SW Future Foal in AZ, CO and NC. For more information and photos of the Marchador breed, you can visit her at the Summerwind website or on Facebook.