What's the recipe for this professional horse photographer's perfect day?

Take one sunny day, some wild horses, a professional horse photographer in search of a great horse photo and meet me at the lake! That's precisely what it was like for me. The Salt River wild horses did not disappoint! 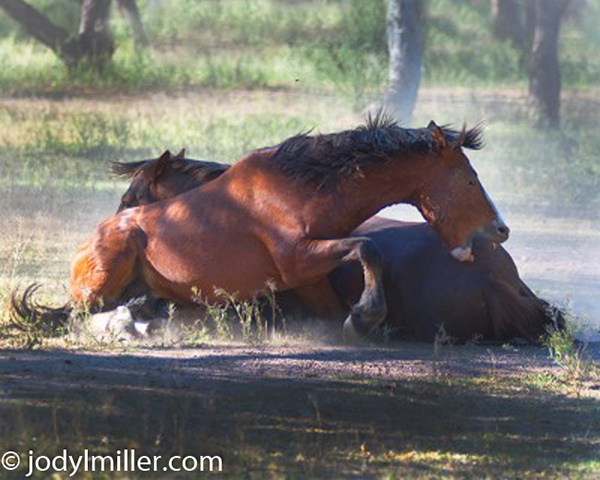 With fewer than 500 Wild Horses remaining in the State of Arizona, a public outcry was launched! As a result of the publicity and raised awareness, the Forest Service first agreed to a 120 day delay and recently agreed to a total rescindment of the round up. In early May 2016 Arizona Governor Doug Ducey signed House Bill 2340 into law, making it a crime to take, harass, kill, or otherwise interfere with a popular herd of wild horses that runs free along the Salt River. 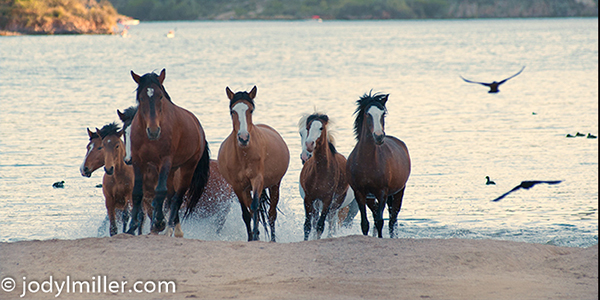 I knew that wild horses ate reeds but I had not really seen them actually doing that, until today that is. It was several hours into my day and I was really hoping to get some photographs of the horses eating reeds by the edge of Saguaro Lake, I was ready to give up the possibility that it might happen on this visit, and I only had one more place to look to see if the horses were even around. They were!

First they were napping under the trees and then they started moving around for some lunch apparently. I was happy to see them and even more eager to photograph them as they began to move toward the lake. It was a weekday, so not many people were out on the beach yet. They all made their way toward the water and then over to the reeds where they stayed and ate for about an hour! I could not have been happier! I was eager to photograph that for the last three weeks and was really thinking that I may only see them at the river eating along the shoreline this trip. Suddenly there they were lined up along the reeds eating side by side. One entire band of horses stood right in front of me just munching away! I had plenty of opportunities to photograph them at various angles adding to my horse photography series that I just released. I was a happy woman! 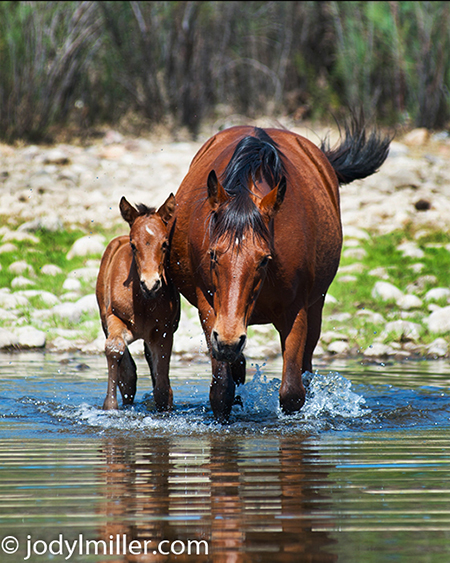 Not only did I have the opportunity to photograph the wild horses eating the reeds right in front of me but I ended up seeing two wild horse herds sharing the beach by the lake. This meant two herds with lead stallions possibly clashing over the mares! I love the strength that they exhibit as they move the herd with their heads low and ears back. It is incredible to witness them posturing and pawing the ground in defiance of each other as well! These are just such powerful, majestic animals. I can feel the power of them as they begin to snort and whinny as they approach each other.

I kept my distance safe beside a tree as they reared up and challenged each other. One particular battle I captured on film went from a rearing fight to both stallions on the ground biting at each other. Sometimes there were short bursts and sometimes it is a full three or four minutes of full on challenge of one another. Within minutes of these conflicts and eruptions they become part of the herd again and mingle with the foals or fillies and mares, only to erupt again in another twenty to thirty minutes. 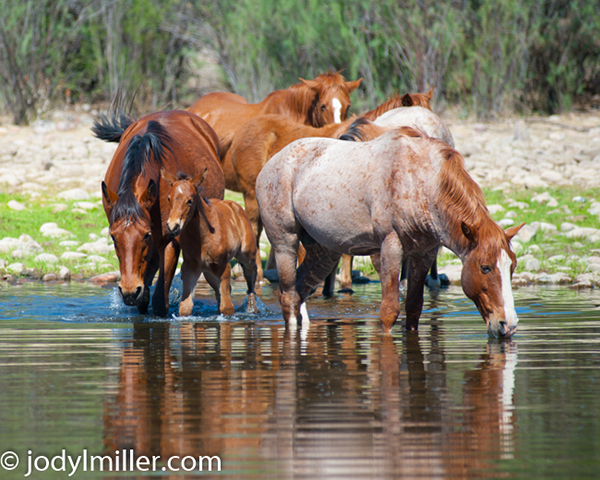 It is surprising to me that these wild horses are actually such good-looking horses as well! The stallions have some battle wounds on their faces and bodies but they still look really great! As I took a few shots of them I realized that they really look great for being so wild. It really feels like the power of their personalities comes through clearly. My 2017 Salt River Wild Horse Calendar is also available now. I hope you enjoy my new series. The images are available on my website as prints, canvas, and home décor items, as well several gallery showings around Northern Arizona! 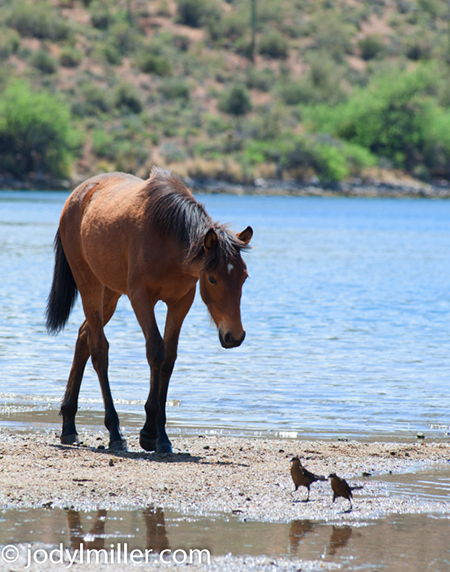 About the author: Jody Miller is a professional photographer specializing in Horse Photography, Equine Photography, and Equestrian photography. Her work can be viewed online here in her gallery section, and she is also featured at Arts Prescott Gallery, in Arizona.