Standing at The Mounting Block With Your OTTB

There was a time when I could place my left foot lightly in the irons and spring up like a pogo stick. Well, those days are long gone for me. If I try to do that nowadays, I’ll hear a snap, crackle, pop and have something sore the next day. So, I now use a mounting block to get on my large 16.3 hand horse. 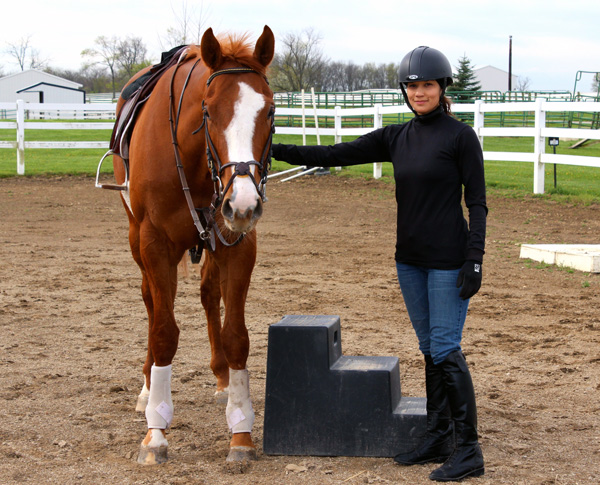 Ex-racehorses coming off of the racetrack have most likely, not seen a mounting block. If your OTTB (off-of-the-track-Thoroughbred) hasn’t had previous reschooling or training, you’ll want to train them to stand in general, but also at the mounting block.

Training Bahamut to stand at the mounting block presented a problem at first. He didn’t know what it was, because at the track you mount the horse on the walk, by way of a leg up. Sometimes racehorses stand (briefly) while you get on, and then it’s off to training on the track. I understood Bahamut's confusion, because I gallop race horses.

First, I taught him to stand for an indefinite amount of time when I was doing ground work with him, during his bomproof training. Even when long lining or lungeing under saddle, he knows "Whoa" means halt. While walking towards the mounting block he would shy away from it, in the beginning. When I finally did get him to stand by it, he would walk off before I was sitting in the saddle. Does that sound familiar to you OTTB owners?

My objective with the mounting block is simple, to have my horse stand quietly while I mount him and continue to have him stand until I give him the command, “Walk on.” I’d like to point out that I have Bahamut trained to respond to vocal commands (at the time this was new to him, as “stand” or “whoa” seemed optional to him.

I walked him over to the mounting block and had him stand there for a few minutes. I rewarded him with pats and praise when he stood still. 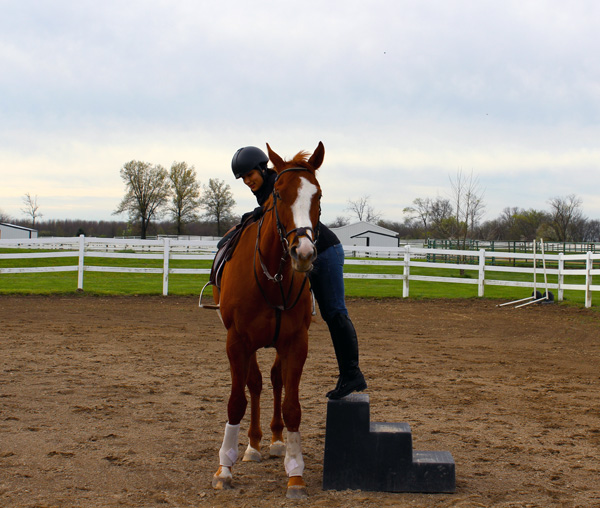 Applying pressure to Bahamut's side by leaning  ©Edgar Paucar

Next, with the reins in my left hand (and some mane), I applied pressure on his left side with my body. He moved away from me for the first few times. Luckily, I was prepared if he went on the move and I didn’t fall on my backside and embarrass myself. I halted him and brought him back to the block. I kept repeating the process until he had no reaction, and I made a big deal of it with much praise. 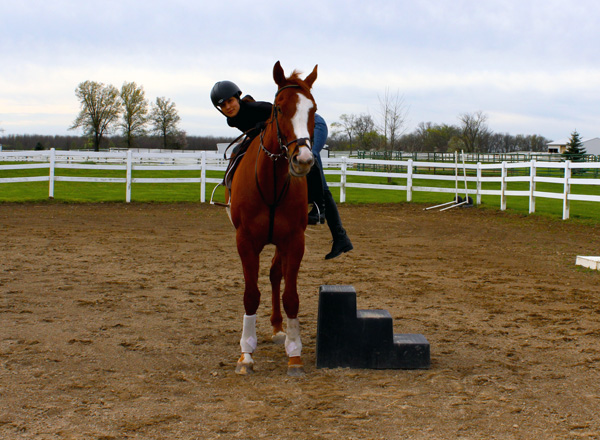 Bahamut standing quietly while I mount him  ©Edgar Paucar

Finally, I got to the top of the mounting block. I firmly held the reins in my left hand, grabbed some more mane and placed my left foot in the stirrup. I leaned on him for a few seconds and when he didn’t move, I legged up into the saddle. 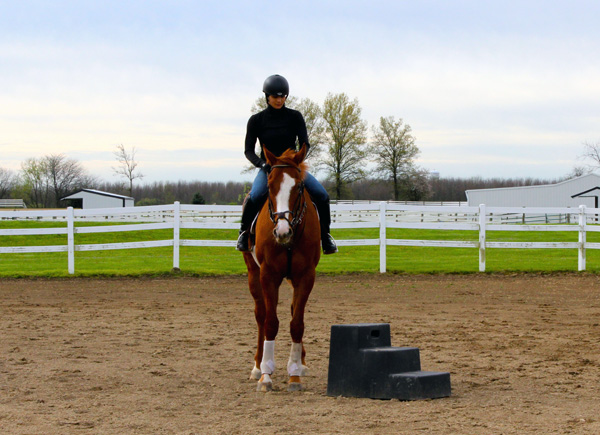 Once I was sitting in the saddle, I made him stand for a while before asking him to move. At first, he would paw or swish his tail or shake his head up and down.I would respond with “Stand.” When he realized making a fuss wasn’t going to get him his way, he relaxed. 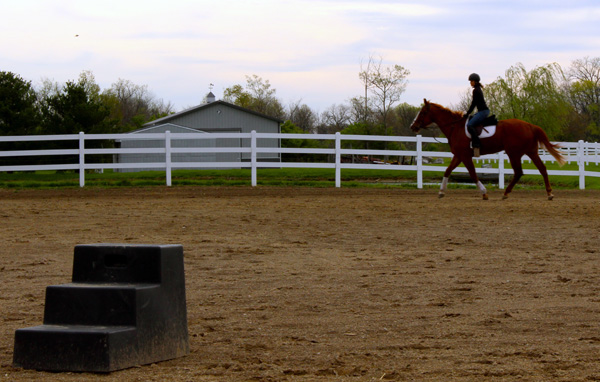 Training your horse to stand at the mounting block might go easily, or you may have to work at it with a different training technique. Every horse is different. Be patient and consistent. Don't get discouraged. Keep working with your horse until they are trained the way you want.

Here are some resources for training techniques:

Beyond the Track, by Anna Morgan Ford

Beyond the Homestretch, by Lynn Reardon

Establishing Respect and Control for English and Western Riders, by Clinton Anderson