Look back at our struggle for freedom, Trace our present day's strength to it's source; And you'll find that man's pathway to glory Is strewn with the bones of the horse. ~ Author Unknown

Few visitors has he, who carried the brave man to death and destiny, on that day so lost in time, and memory. Faithfully he still stands, though stuffed and stretched across an effigy of his battle scarred frame. Combat ready with saddle, and fair…just gaze upon him - and you will hear the bugles of the U.S. 7th Cavalry blowing - ‘cross the vast plains of tall grass and hills … the Little Bighorn, June 25, 1876. Amid the shrieks of defiance, and the gurgle of death, the faithful steed charged forward ‘til his master, limp, from the saddle fell… left Comanche wounded and bloody – directionless - in the sea of madness enclosing.

Who expected such a performance from a mixed breed gelding, but yet he rode on, and on – into the history books, and movies galore. His end won him display in the halls of the University of Kansas Museum – but alas, no one paid the bill for his taxidermy, and in the 1970’s the brass plaque was removed from his display on request of local Indian tribesmen. Still at war, even in death – still standing tall, and in full combat nobility.

After a lengthy recovery, Comanche was retired. In April 1878, Colonel Samuel D. Sturgis issued the following:

(1.) The horse known as 'Comanche,' being the only living representative of the bloody tragedy of the Little Big Horn, June 25th, 1876, his kind treatment and comfort shall be a matter of special pride and solicitude on the part of every member of the Seventh Cavalry to the end that his life be preserved to the utmost limit. Wounded and scarred as he is, his very existence speaks in terms more eloquent than words, of the desperate struggle against overwhelming numbers of the hopeless conflict and the heroic manner in which all went down on that fatal day.

(2.) The commanding officer of Company I will see that a special and comfortable stable is fitted up for him, and he will not be ridden by any person whatsoever, under any circumstances, nor will he be put to any kind of work.

(3.) Hereafter, upon all occasions of ceremony of mounted regimental formation, saddled, bridled, and draped in mourning, and led by a mounted trooper of Company I, will be paraded with the regiment.

Myles Keogh, Captain, 7th Cavalry, bought Comanche from the Army, as his own horse in 1868. He named him Comanche, as his first wound was from the arrow of a Comanche during an engagement in Kansas, also in 1868. Captain Keogh rode Comanche strictly as a combat horse, where it was noted that each time he was wounded, Comanche pushed on. It was from the back of his chosen, and dashing steed that Captain Keogh was killed at the Battle of the Little Bighorn. 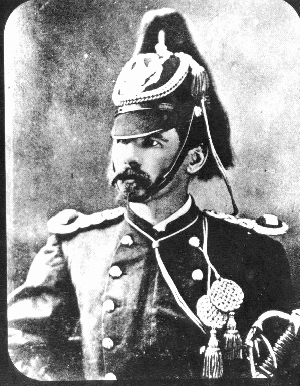 Out of respect, no other person ever rode Comanche thereafter.

The ceremonial order of Col. Sturgis aroused another contribution to the Comanche story which made it into print. Farrier John Rivers of Company I, who looked after Comanche, answered questions about him later in his life. Below is what the reporter captured in a May 10, 1878 article in the Bismark Tribune.

"Comanche was a veteran, 21 years old ( Birth date, and lineage unknown ) , and had been with the 7th Cavalry since its Organization in '66.... He was found by Sergeant [Milton J.] DeLacey [Co. I] in a ravine where he had crawled, there to die and feed the Crows. He was raised up and tenderly cared for. His wounds were serious, but not necessarily fatal if properly looked after...He carries seven scars from as many bullet wounds. There are four back of the foreshoulder, one through a hoof, and one on either hind leg. On the Custer battlefield (actually Fort Abraham Lincoln) three of the balls were extracted from his body and the last one was not taken out until April '77… Comanche is not a great horse, physically talking; he is of medium size ( Reportedly 15 hands tall ), neatly put up, but quite noble looking. He is very gentle. His color is 'claybank' He would make a handsome carriage horse..."

Comanche died in 1890. He received full military honors. He has joined the honored ranks of those we remember in story forever. Under the sweat of a thousand saddle blankets, and through the Hell of combat, he charged willingly into the service of mankind, and will be timelessly, and honorably recalled for such loyalty.

Read another article by Jim Hodges, Life on the George Ranch. Learn more about Jim Hodges.