As I lay awake the night before the ride to Rock Bridge Canyon, I had the same pre-ride jitters that I always have, especially when I do not know what the trails are like. We ride trails from wide and flat to steep hills, or no trail at all, so it helps to know the best horse, tack, and attire to be prepared. I finally decided on taking Daisy, my do-all horse, and while envisioning all the necessary tack, clothes, boots, food, drinks, and most importantly, my camera, I managed to drop off and get some sleep. 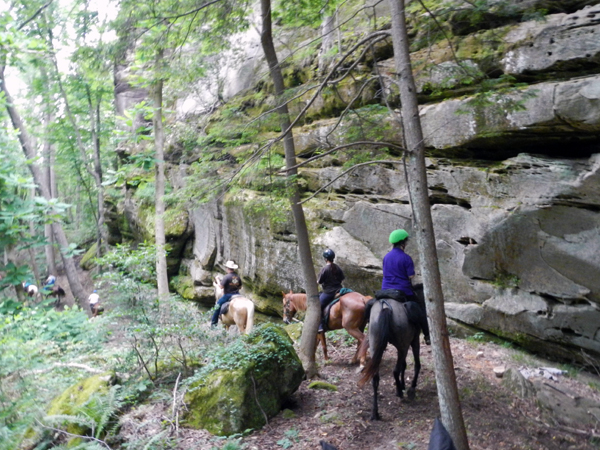 Morning came and I managed to have everything ready by the time my buddies arrived. We all loaded into the truck and trailer and found our way in under an hour to the designated meeting spot in Hodges, Alabama to follow our other friends to the ride. We were all excited about finally seeing what our local friends couldn't stop talking about.

When we got into the woods we began to see a few rocks, boulders, and the wonderful wild magnolia and hemlock trees for which the Bankhead area is known. OK, I thought, this is like home. As we got deeper into the woods, the trail continued to be wide enough for a small truck to travel, no overhanging branches to duck under or leg grabbing thorns to avoid, and sandy soil that any barefoot horse should be happy on.

I had gotten my camera out in anticipation and snapped a few pictures of all the friends we had run into at the trailhead. It seemed that everyone within an 80-mile radius had turned out to ride so there were probably close to 30 of us.

We had not traveled a mile until we were dropping off into the canyon. The rocks got larger and a rock wall appeared on one side, all the while the open side into the canyon was getting deeper and steeper. The wall grew taller and more beautiful with every step. I took a picture, turned my camera off and then went around a corner that opened up into an enormous shelter. I just gave up putting my camera down or turning it off, as around every curve was even more jaw-dropping than the last.

The trail got steeper as we rode–– all the while following that gorgeous rock wall. It never stayed the same, going from layers of browns, greens, moss covered portions and ferns growing from some of the walls, to pillars and pedestals of stacked stone, eroded holes of all shapes and sizes, even some columns and a couple of rock bridges at the back of shelters with the sun shining through. Every rider was looking up with their heads leaned back as far as we could to see the top of the walls reaching up to meet the sky.

Every bend brought another shelter large enough for all of us to fit, a creek bubbling over smooth stones winding through the floor of the canyon in the hollows, waterfalls hidden behind huge boulders that had toppled from the cliffs above eons ago to rest at the bottom of the gorge. There were trees that seemed to sprout from the walls themselves and somehow hang on to reach for the blue above.

Sand Canyon was aptly named, as the floor of the whole canyon was filled with ankle deep white sand that would rival that of Gulf Shores any day. The sandrock walls of Sand Canyon were the most awesome shades of pinks, cinnamons, and oranges. Never before have I seen a place so magnificent, with no winding through woods or fields to get to the next feature. I have been told they go on for more than eight miles. Other places have been nick-named "the Grand Canyon of the South" but after seeing Rock Bridge Canyon, it is more deserving of that title than anywhere else.

The town of Hodges, Alabama has outdone themselves so far by building some 25 miles of trails that adjoin existing trails also available to ride. Bear Creek can be seen from some of the overlooks far below making hairpin turns in the valley. There are plans for at least 30 more miles of Rails to Trails along a former railroad bed.

There is a nominal fee to ride through this glorious place that will help, along with the generous grant money, in the building of a large arena, Equestrian Center, and many more campsites. It is worth much more than the $10 charge that is currently being paid in town at the Community Center. There will be restrooms with showers, stalls, a pavilion and horse shows will be held at the center in the future.

Do not let the appearance of the entry trails fool you. If you come to this magical place to ride, bring a seasoned, legged-up horse. The switchbacks can be so steep and so long that you’ll be tip-toeing, squatting, and sliding on the downside only to climb up, up, up on the other on seemingly endless hills. A breast collar and a crupper are on my list of essentials, as well as my trusty helmet. Of course, if you want to have memories to carry home with you a camera should be at the top of the list. No pictures could ever do justice to this place, but I have included a few to tempt you into coming to visit.


How you can go: Learn more about riding in Rock Bridge Canyon Equestrian Park.