Caroline and Alexis Ride the Bay

Jean-Pierre returned and loaded the trailer with a pony named Chloe, which my daughter Alexis Mozeleski was to ride, and we were off to rendez-vous with Catherine and the two horses she had left with earlier that morning. 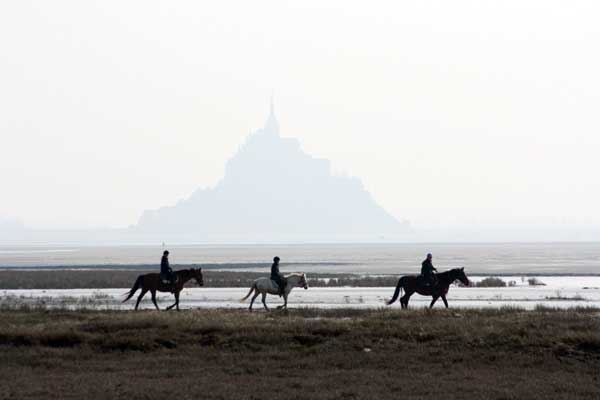 As we would only have one day to ride the Bay of Mont-St-Michel, we were trailering the horses the first part of the trek that normally takes 5 hours to reach the bay. 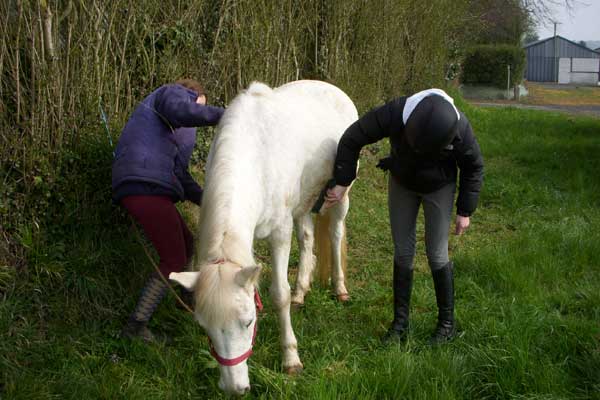 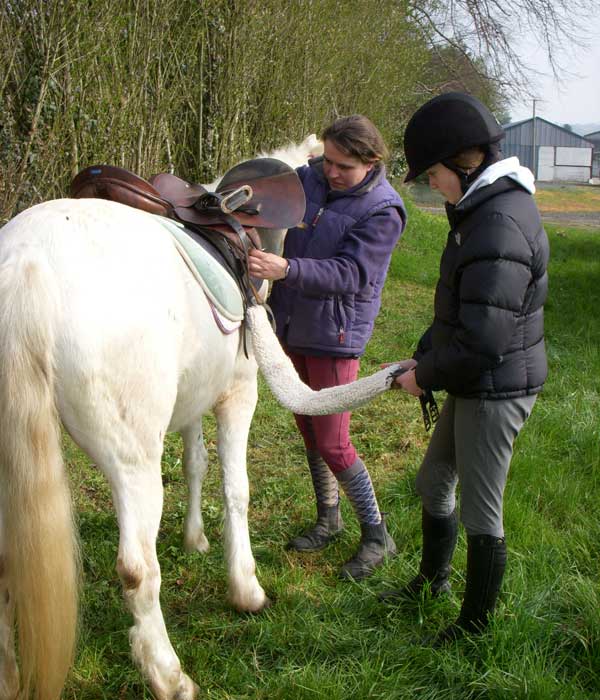 We arrived at the meeting point and helped Catherine and Jean-Pierre tack up the horses. Alexis helped curry Chloe who despite being bathed the night before had rolled during the night and needed another good grooming prior to our departure. 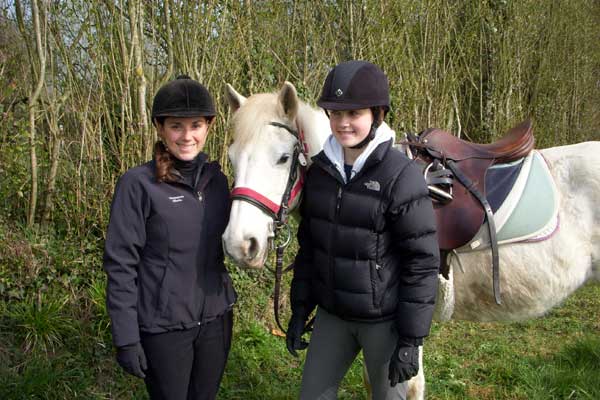 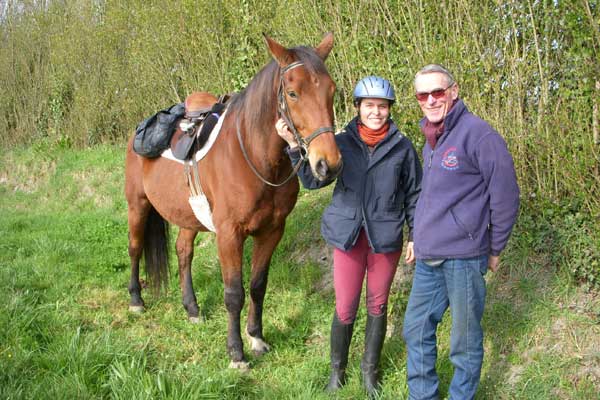 Once in the saddle, we started off up the north side of the bay. The timing of our departure was precisely planned in accordance with the first low tide of the day to allow us safe passage along the paths further ahead.

These tides have been described by Victor Hugo as "à la vitesse d'un cheval au galop" or "as swiftly as a galloping horse" as they vary and can change quite quickly.

The first part of our trek allowed us time to get to know our horses. As we traveled the narrow path, submerged in a few inches of water much of the time, Catherine told us various facts about the bay and the low lands or salt marshes that the bay covers and uncovers with each tide. 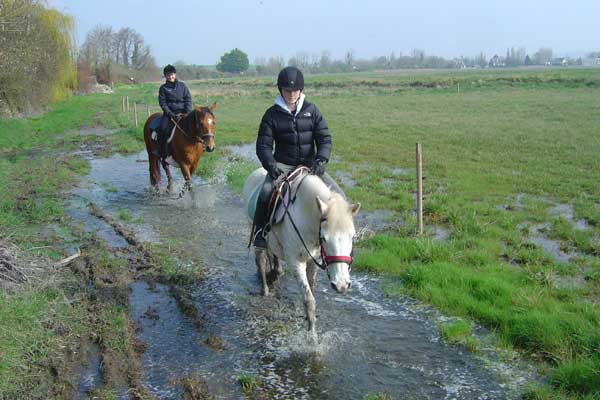 These salt marsh meadows, created by polarization (waves) and occasional flooding are ideally suited for grazing sheep. As we trotted and then galloped various parts of the path, we reach an open field on a hill where we could see Mont St. Michel in the distance.

The fog of the morning was lifting and the Abbey gave off a mystical aura, as it seemed to come up out of the bay that surrounded it. 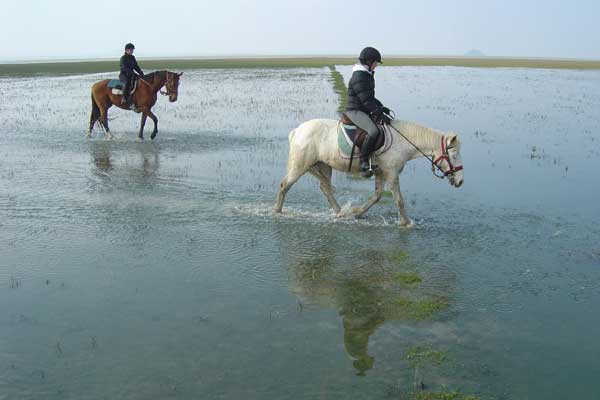 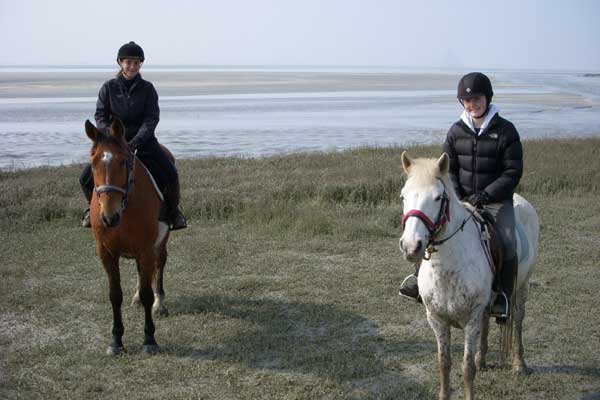 Mont St. Michel is a perched on a rocky tidal island, amidst vast sandbanks. Its first settlers are thought to have arrived in the 6th Century A.D., followed by the construction of its Gothic-style Benedictine Abbey in the 8th Century A.D. Today there remain 50 residents along with the well-visited Abbey that remain atop and visible from miles away. 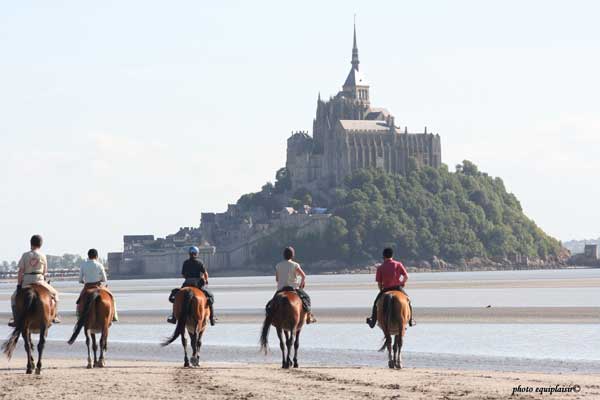 After an exhilarating gallop up the hill, we continued our trek past local farms and fields. We learned that Normandy has indigenous cows that are clearly identified by the dark rings around their nose and eyes. 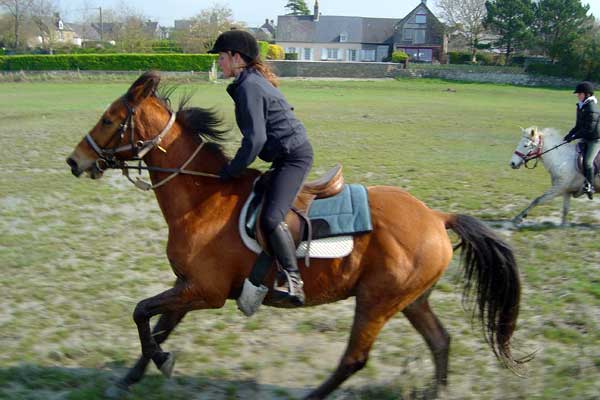 We also passed smaller cows called Jersey cattle that have distinctive features, an indication that are from the Isle of Guernsey, an English Island just off the Norman coast. 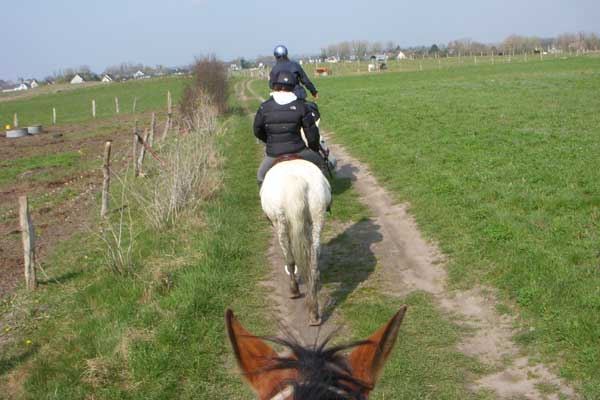 As we continued along the edge of the bay, the sea breeze that carried the smell of the ocean filled my lungs with an invigorating energy. Mont St. Michel was ahead of us in the distant fog and the calls from the seagulls were the perfect accompaniment to this picturesque setting as they hovered above us while fighting the wind. 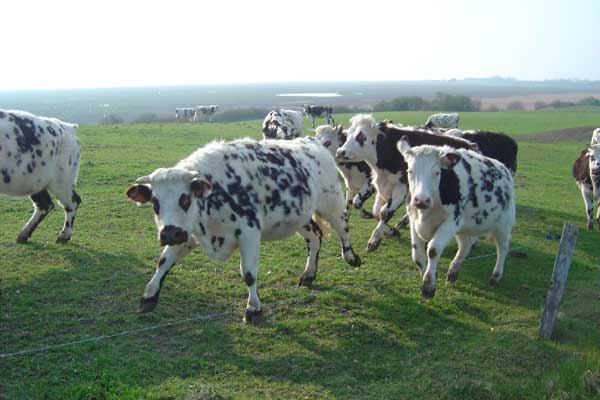 Catherine pointed out the fences of bushes that separated the fields from the bay and said that in the summer months, they are filled with berries that she and other riders, as well as the horses, take at liberty as they pass by. 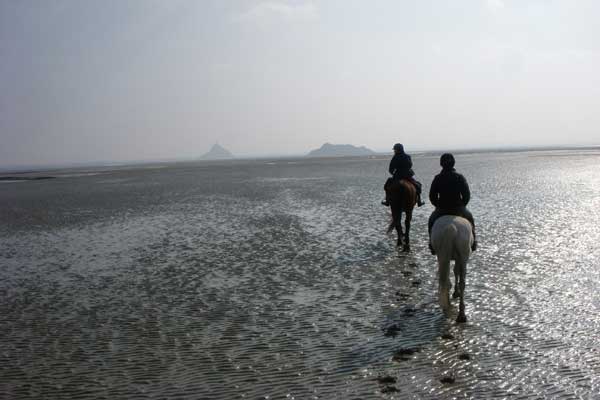 With the mention of berries, Alexis and I realized we were getting hungry, and we were happy to hear that we would be stopping shortly for lunch. Dismounting near a seaside town, we unbridled our horses and walked, leading them a short distance to a grassy area where Catherine decided it would be safe to create a temporary coral for them to also take a break. 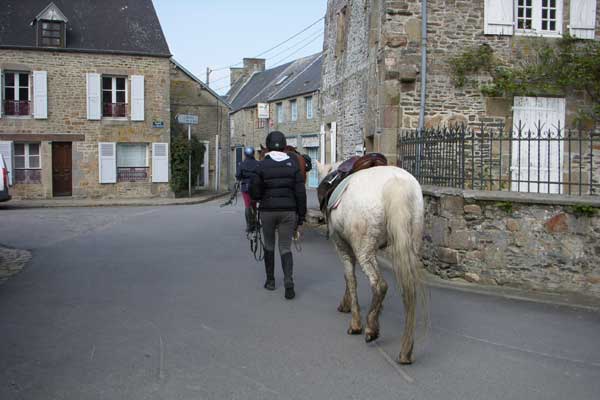 Once we hitched the horses to the fence with plenty of nearby grass, we joined Annette and Jean-Pierre at the restaurant for a well deserved rest ourselves. While enjoying a typical Norman lunch called a “gallette complete”, a crepe made with buckwheat flour and filled with ham, cheese, and egg, Catherine explained more about how she and here father were both official guides of the Bay.

She went on to tell us that although many people claim to know the Bay, in order to become an official guide, there are a series of several exams one must take to obtain a diploma, certifying one’s experience and knowledge of horses and the bay.

The beauty and magical presence of the bay and Mont St. Michel draw many visitors each year, but what one does not see are the very present dangers it holds, particularly quicksand. 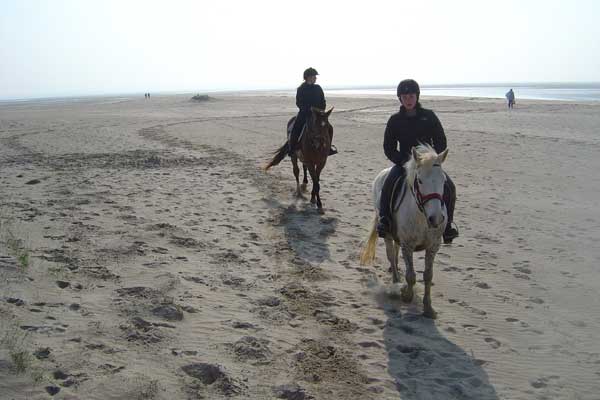 We learned that there are three rivers that even at low tide, remain running through the bay. They are called the Couesnon River, the Sélune River, and the Sée River.

One of these rivers has been at the source of a long standing feud between Normandy and Brittany, another region of France to the west of Normandy.

The Bretons claim that the Couesnon River marks the traditional boundary between Normandy and Brittany. Due to the course of the river being altered over the centuries, Mont St. Michel now sits on the Norman side of the frontier. 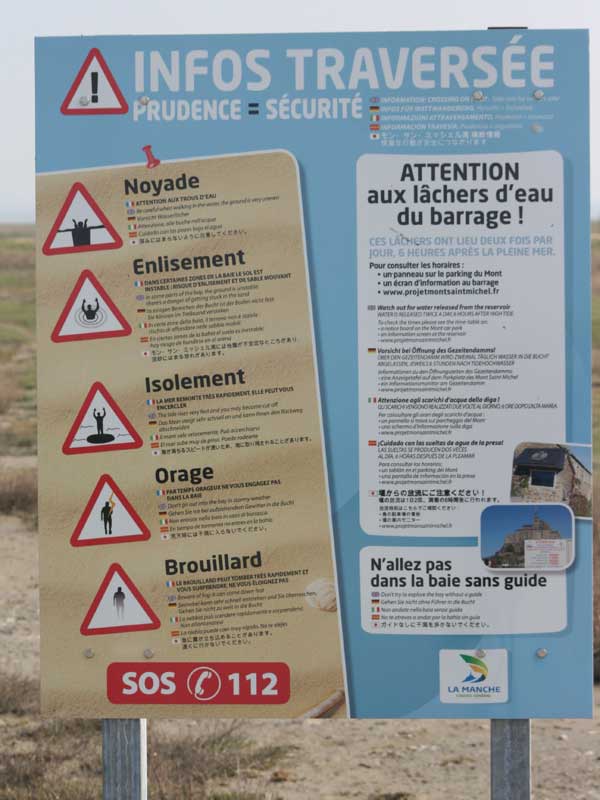 All three rivers have strong currents and steep drops that cannot be seen from above. The risk of encountering quicksand throughout the bay is always a concern.

This quicksand is created by pockets of air and water trapped below the sand once the water recedes. All official guides are trained to know what to look for and how to detect unusual looking sand, air bubbles, and safe areas to cross the Bay.

One thing that amazed me, as we spent 5 hours trekking though the deep and at times, thick, wet sand, was that our horses were all wearing metal shoes. I asked Catherine if the horses losing their shoes was an issue, to which she replied that it wasn’t at all.

I told Catherine that their farm must have a farrier that can perform miracles since he is able to get the horses shoes to stay on in the deep mud-like sand! I had to know what the secret was.

Despite all of our conversations this entire time being in French (Catherine also speaking English very well when necessary), this was the one part of the conversation that was blocked by language.... or perhaps they were not willing to reveal the secret! 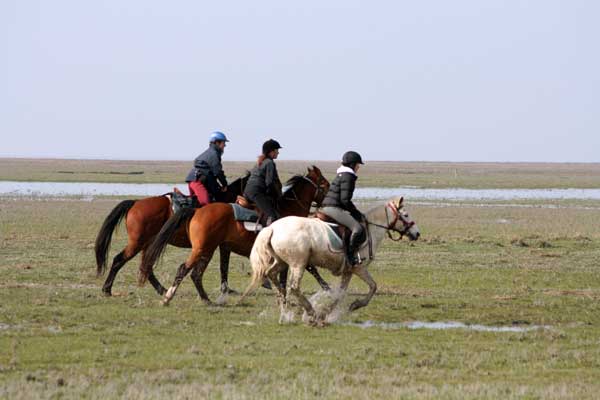 After a last gallop across the north shores of the Bay, it was time to start our trek back to Avranches. Normally, between the months of April to October and with optimal conditions, Catherine and Jean-Pierre will lead you across the 6 kilometer or almost 4 mile stretch of sand to reach the Mont itself.

Given that we were too early in the season and this particular weekend was to have the highest tide of the year, the conditions were not safe, nor would we have had enough time to make it to the Mont before the tide started to return. Dispite not being able to cross the Bay itself, we had an amazing day riding in Normandy!

Or start from the begining: