Riding into the Saskatchewan Wilderness in Canada

Horses, Flannel PJs and all the Bannock you can eat!

Roughing it in the Canadian wilderness with no running water or toilets is something I refused to do... until someone said the magic word: horses. Last summer, I was presented with the opportunity to ride for two days, three hours per day into the prairie wilderness, boldly going where no motorized vehicles are allowed to go, searching for herds of wild bison on a mount that would be mine, for 48-hours anyway. Bison are cool, but let’s face it–– they had me at horses.

Clearly, I'm not one of the European or Asian tourist (and many North American) lured by the romance of the wild west and an authentic cowboy experience that Gord Vaadeland from Sturgeon River Ranch Adventures and his crew (two guides and Glenn Hegland, the driver of the wagon led by two beautiful black Percherons) pull off without a hitch several times a week every summer in Prince Albert National Park north of Saskatoon, Saskatchewan.

It’s an understatement to say I went on this Sturgeon River Ranch riding excursion with some trepidation. The idea of travelling with a bag smaller than my usual carry-on, sleeping in a tipi and not showering for more than 48 hours struck a chord of dread in my soul. But hygiene be damned. Spending hours on horseback and days interacting with a herd of equine, including a mare and her foul, seemed a priceless experience. So I embraced the adventure armed with plenty of bug spray, two packages of wetnaps, and a 'can do' attitude I knew would fail me before the weekend was over.

Sturgeon River Ranch Adventures in Big River, Saskatchewan is a trail riding outfitter offering three- and five-hour rides into the remote part of the park, as well as the grand-daddy of all western adventures: two, three and four nights under the stars around a campfire, cooking over an open fire (actually, guide Becky takes care of that) and sleeping in a tipi (on a plastic cot). When those from afar picture Canada, images vast expanses of wilderness track come to mind, yet it’s an experience few nationals will seek out. The crew does a great of job of guiding experienced and non-experienced riders (in Western saddles) through the brush, along the hill’s edge and into open swampy fields.

Located in the centre of the province, Prince Albert National Park has been preserving 3800 square kilometers of natural boreal forest since 1928 when it opened officially as a national park. It embraces the notoriety of being home to the preserved remote lakeside cabin home of naturalist and writer, Grey Owl from the 1930s. Also, wild bison roam free in this park (Canada’s only free ranging herd still within their historic range) and spotting them is part of experience.

But before we can camp, we have to get there. Our destination is a campsite of two permanently erected tipis (one storing cots and cooking equipment) far into the park for just this excursion.
After parking the cars at the entrance to the park and loading up the wagon with supplies, we say good bye to what civilization lay behind us and head into the forest, first through clearly marked trails. But soon we're riding through dense brush in this lesser traveled conservation land that's accessible via hiking or horseback only. Here, the trails are narrow barely-carved paths between low hanging branches that whip faces as we ride by, and there's absolutely no sign of human presence other than ours. This is the bucket list of trail rides, especially for those who can't get enough of horses and dream of the great Canadian wilderness viewed from under the brim of a cowboy hat.

The park has a 'front country' that we don’t see. This is where almost all sane visitors (and families) gravitate to. This area is vehicle accessible and contains newly minted 'Otentiks,' ready-to-camp sites with tents containing raised beds, air mattresses and tables now a feature at many Canadian national parks. Showers and bathrooms are nearby.

But sanity and sanitation be dammed; it's the park's 'back country' that’s the domain of real outdoors people (and for some reason me), or a cowboy or two leading a group trying to be. It's where we're headed, and it's the best place to spy herds, or small groups, of free-range wild bison that share the landscape with deer, elk, and even grey and black wolves (whose curiosity drew three of them creeping to the edge of our camp at 4 a.m.) Night is the real challenge, but first the bison.

We spot bison, a highlight on this trail ride through Prince Albert National Park thanks to Gord Vaadeland from Sturgeon River Ranch Adventures in Saskatchewan. This is only one of a few in North America that can claim proximity to these rare and massive creatures that once roamed this region in remarkable numbers. Today the herd in this national park surges and wanes between 200 and 500 each year, with conservation efforts spearheaded by local grassroots groups. The best way to find them is to follow bison prints along trails they carve through the forest (and big pools of poo are evidence of their travels).

During our ride into the park, we encounter about six buffalo in total, mostly from a distance although the lead horse did spook at one point, coming within ten feet of one along a forest trail. Here’s what I learn about bison: first, they stand their ground horses when they get too close and second, they hop. Yes, hop. These massive masculine beasts actually bop along like bouncy wind-up toys across open fields when startled or in need of speed. It’s the most comical surprise of the trip; humour I’ll need to endure a night in a tent fully aware of my own limitations I suspected would surface after the sun sets.

At camp, sleeping bags are provided, and so is dinner, breakfast and a packed lunch. Some horses are tied nearby; some graze freely around the perimeter. Or they get smart like Jackson, the chestnut Morgan cross, and stand near the fire pit's smoke to keep bugs at bay. 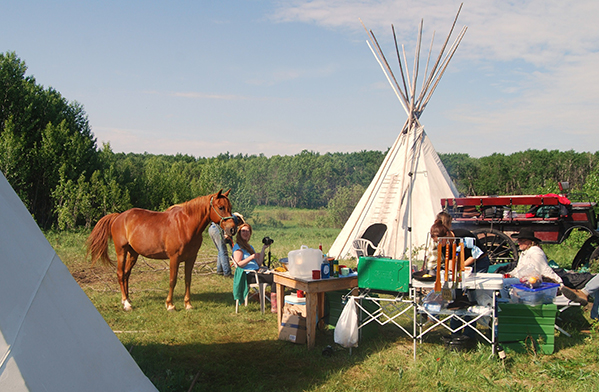 Camp beside the tipi.

After almost three hours of riding, we dismount at our campsite where our fearless leader is most interested in kicking up his heels around the fire and throwing back a beer or two. It’s like being at the cottage with none of the creature comforts, and we wait and watch while staff members scramble to set up, including manifesting a portable cooking station. I'm impressed with the dinner Becky creates using only two frying pans and a Dutch oven - fresh fish, fried Bannock and a mélange of vegetables in a cream sauce that almost magically emerges from an iron pot covered in camp fire cinders. It’s a challenge most Master Chef reality T.V. contestants would fail.

Night, however, is a different experience. I freeze under one sleeping bag and an army-style blanket (despite the flannel cat-print pajamas I wore that invited taunting from tipi mates). My jeans and socks are damp, and peeing in the woods is something I survive thanks to the many squat exercises my gym trainer demands. All hardship angst, however, disappears when I get back on the horse in the morning and head through the forest pushing through tree branches like Mantracker on a mission. And speaking of that reality TV show, Gord appeared on two episodes of that show as the sidekick guiding Mantracker through the very trails we trot through now.

After a peppy two-hour ride back to the entrance of the park (the horse know they're heading back to the trailers and home), I'm glad to get back to civilization (or a prairie version of such), wish I could take my mount Queenie home with me, and look forward to the shower of my dreams when I finally get to a motel room. I vow never to sleep outside again, never to wear the same jeans for three days in a row, and never to live without indoor plumbing. But glad I've crossed that off my bucket list and am happy to leave the great outdoors to the great wild beasts.

That is until I see the photos. The horses look beautiful, everyone riding is smiling and the camera picks up no evidence of bugs, body odor or bruises. The lighting is perfect, rolling hills picturesque, clouds notably cotton-like and sky an ideal eye colour blue. No wonder people from afar think Canada is an impressive Eden of lush green simplicity and maybe, sometimes in certain places, they're right. And that's something truly romantic.

About the author: Sherri Telenko is a Canadian college English instructor and freelance writer specializing in lifestyle and travel pieces. Her love of animals, particularly horses, led her to create www.horsetrotting.net, a magazine blog dedicated to travel, trail riding, and all things horses.