Did you know that Pure Spanish Horses are good at fetching? Or that gray or white horses are born black or very dark brown and change color over time? Learn more interesting facts about the Pura Raza Española breed and find out if this is the right horse for you!

Equitrekking interviews Barb Clark, Executive Director of The Foundation for the Pure Spanish Horse, an International Resource Center for the Pura Raza Española (P.R.E.) Horse.  She shares the history and legacy of this highly-developed and talented equine breed.

Raina Paucar for Equitrekking: What are the origins of the Pura Raza Española?

Barb Clark: The Pura Raza Española (P.R.E.) or Pure Spanish Horse, has been linked with the history and the culture of Andalusia since time immemorial. There are cave drawings dating back to 5,000 BC found in the caves of Altamira and Canforos de Penarubia in northeastern Spain depicting native horses whose body types are remarkably like today's horse. These drawings depict the predecessors of the Pure Spanish Horse. Originally used in warfare, as a means of transport and for other work, the industrial revolution changed his role to that of man's companion in sport and leisure activities, in which he is one of the leaders in the Andalusian region. The Pure Spanish Horse has been an integral part of Spain from its beginnings and contributes much to our better knowledge and understanding of its landscape, customs and people.

The Pure Spanish Horse was unified as a breed in the sixteenth century (between 1567 and 1593) by the Spanish King Felipe II who formally established the standards for the breed, which we recognize today as the Pure Spanish Horse. During these years King Felipe II decided to bring to life the universally idealized horse that has been so long pictured in history, in bronze, in paintings. He looked at the basic horse bred in Spain, selected the best of those examples which came closest to the idealized animal he desired, and directed that the idealized horse be produced. Concurrent with his breeding program, the humanistic approach was spreading through Spain and the teachings of the ancient Greek Xenophon were put into practice for the treatment and training of these carefully bred horses.


Equitrekking: What are the general conformation characteristics of the Pura Raza Española?

Barb Clark: P.R.E. Horses are known for their square overall shape that is balanced and athletic in its morphology. Their conformation hints at their capabilities: strong boned legs, good slope to the shoulder, deep heart-girth, rounded powerful haunches. The classically beautiful head of a Pure Spanish Horse is unique and an instant identifier of its breed. One can read the history in their large oval eyes inside a triangular–shaped orbital arch and can imagine strength for extended efforts in the inverted comma-shaped nostrils that expand downward to bring in large quantities of air. And of course there are the unique racial characteristics in the shape and dexterity of the upper lip, the sensitivity of the mouth and the point of the chin. 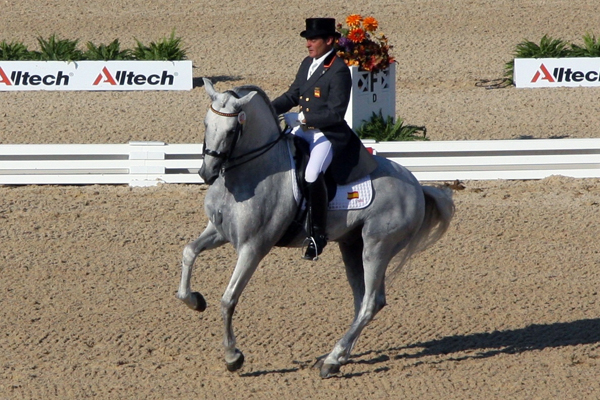 A P.R.E performing a Canter Pirouette / photo by Sarah Shechner

Equitrekking: How has the Pura Raza Española been used and ridden throughout history?

Barb Clark: The P.R.E. Horse enjoys a rich history generated by hundreds of years of importance in the world. There are examples of this breed being the desired mounts of the Kings and Queens in Europe. Its selection for athleticism, intelligence and temperament for hundreds of years makes the breed perfect for almost any discipline. The Pure Spanish Horse is used today in Spain in the bullring and is used to work stock on the farms. The horse is also used today in dressage competitions, in competitive driving as single horse or four-horse hitch, and in the discipline distinctly Spanish, the Doma Vaquera – formalized as the show ring version of farm work, most closely related to a reining pattern with combined dressage elements. Because of the breed’s athletic ability, it is adept at all the disciplines one would expect, hunt seat, saddle seat, western pleasure, parades, trail, Working Equitation, and even jumping.


Equitrekking: What are some fun facts people may not know about Pura Raza Española?

Barb Clark: P.R.E. Horses are good at fetching. It was a function bred in the horses when their riders wore armor and could not get off to retrieve something that was dropped. The horses would bend down and pick up the item using their mouths and hand it to their rider.

Pure Spanish Horses are so intelligent that they frequently have a sense of humor and love to play tricks on their owners. One owner relates that she went to clean out the hooves of her horse and asked him to pick up his left front hoof. He turned his head to look at her and picked up his right hind foot. She went to clean the hoof that was offered and he put it down and picked up his left front hoof. This game persisted with the horse turning his head and looking at her every time in amusement. The frustrated but amused owner won the game by asking for a hoof while offering a carrot as a reward.

The predominant color of the Pure Spanish Horse is gray or white. Many people don’t realize that the gray or white horses are born black or very dark brown. This change to white is a gradual fading and can take as long as 12 years to accomplish, so that every year you have a horse of a different color.

The COBRA is unique to the breed. Historically, the mares are not traditionally ridden but are fastened together with a simple collar around the neck in groups of three or five or more to thrash the grains in the fields in a circular motion. Beautifully toned bells were attached to the collars to give the movements a musically beautiful tone. In modern times this has evolved into the favorite show class where skilled handlers put the mares through their paces. This class is something that is unforgettable and beautiful to see no matter what type of horse you like.

Barb Clark: The general temperament of the P.R.E. Horse is one of intelligence and tolerance and willingness. They have an unusual desire to please their owners and try very hard to do as requested. They are quick learners and bond with their owners to form a true partnership. Their heightened intelligence combined with their willingness to please makes training them quite easy.

Barb Clark: The style of rider is not as important as the dedication to the horse’s well being since Spanish Horses can easily adapt to most styles of riders. The P.R.E. horse is revered by its owners no matter how they are used. The Spanish horse deserves a caring, committed owner who can provide the love and partnership these horses desire. They are best suited to be owned and ridden by individuals who really like them and consider their needs first. 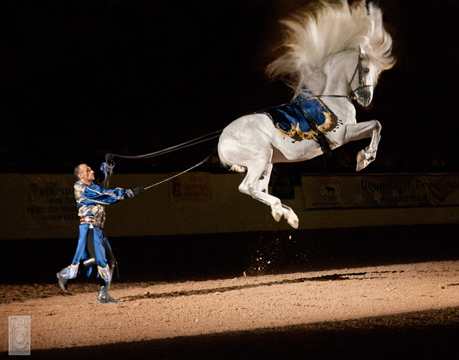 A P.R.E performing the Capriole / photo by Paco Rey

Equitrekking: Has the Pura Raza Española evolved over time?

Barb Clark: The horse has evolved with the humans that ride it. In years past, people were smaller in stature and so were the horses that they rode. The size of the breed has crept up as its riders have also become taller. Throughout history there have been various fads in the breed but they have strictly adhered to the original description of the perfect horse that originated in the time of King Felipe II. There is now a movement by certain breeders to breed them for more competitive dressage movements. It can be noted that the Pure Spanish Horses that are successful in dressage are also good representatives of their breed.


Equitrekking: Are there any famous historical Pura Raza Española Horses?

Barb Clark:  There are many historical figures that rode Spanish Horses but proving that can be difficult. Recently there are several Pure Spanish Horses in dressage that have reached a level of international notoriety, such as Evento, who competed in the Atlanta Olympics, Invasor, Fuego de Cárdenas, Norte Lovera, are others who have Olympic credits. The most famous Spanish Horse is the one that is in your barn! 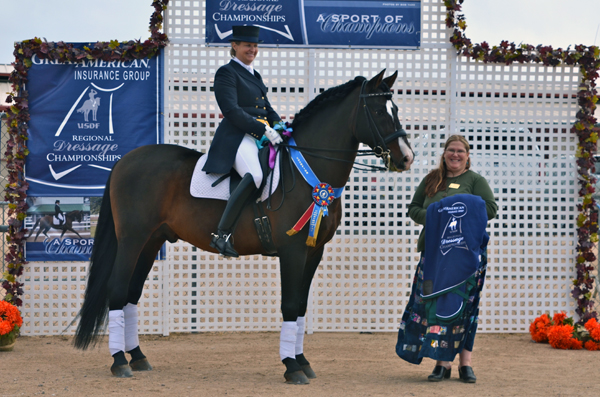 A P.R.E displaying his many ribbons as a Regional Champion / photo by Linda Nickerson

Equitrekking: What makes the Pura Raza Española unique as a breed?

Barb Clark: The Spanish Horse has been bred for centuries to be the perfect horse. Their origins came about in a time when lives depended upon having an athletic, willing, functional and sturdy breed that looked majestic and beautiful. No other horse has been selected for these traits throughout centuries. If you ask anyone who owns a Pure Spanish Horse how they would change the breed chances are you will get this answer; “How can you change perfection?” This horse is unique and once you have one it is difficult to consider any other breed.

For further Information and resourses on the Pura Raza  Española, visit www.prehorse.org.