Learn about the challenges and rewards of photographing wild horses

For years I admired and revered many of the wild horse photos I’d seen in books, magazines, and art galleries. Stallions locked in combat. Herds running at full gallop across the landscape.

You all probably know the types of images I am thinking about. I knew that someday I would want to do the same types of photographs. It was only a matter of time.

Well, eleven years ago I bought my first horse. Then suddenly, or so it seemed, I had eight. But this is another story. Three years ago I was invited to begin a photo project of a group of horses out on a private ranch here in New Mexico. They’ve been out there for generations and area said to be direct descendants of the horses brought over by the Spanish in the 1600s. 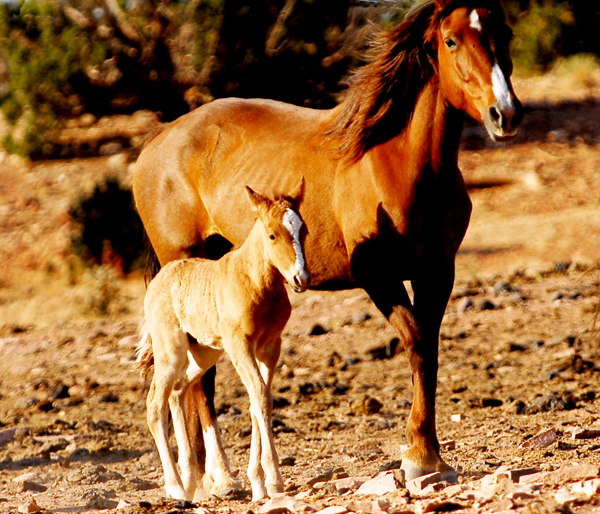 I’ve since learned that this is a frequent claim made to give additional legitimacy to each group of wild horses all over the country. As direct descendants, they deserve more protection than horses who are not so directly connected, or so it seems to the listener of stories and tales of wild horses in America.

But, no matter. I had my project and I was anxious to get started. My first introduction to the area and the horses was on horseback, as we had to ride a huge valley in search of the horses.

We did see several small groups on that first trip. Now, I knew how to get out there and I was given a key to the locked gate. Hurrah, I was on my way. 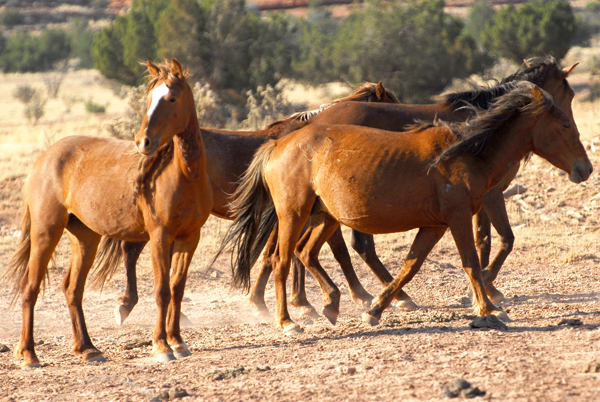 Now, after three years of tracking, watching and photographing I have learned many things.

First, I love tracking and photographing horses with my own horse. I love to ride and being on a horse looking for other horses just seems to be the way to do things.

But that is just the beginning.

Doing this from horseback has made me a real student of horse behavior.

The next thing I learned is that those moments of brutal battles between stallions are few and far between. I have seen stallions with their mares come into a watering area, leave their mares behind, and walk over to a small group of bachelor stallions and actually quietly and peacefully hang out with them for several minutes. 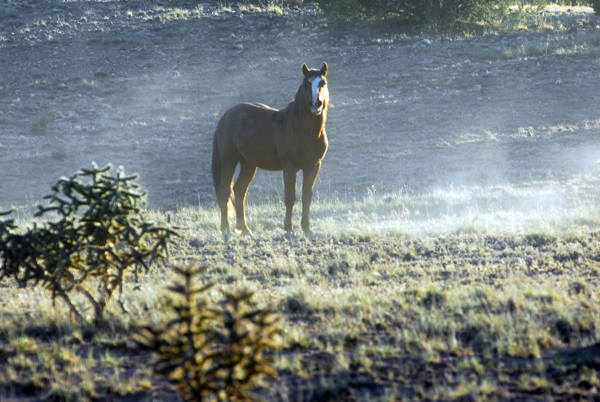 With my camera up at my eye I was all set for the photo of a lifetime. Instead it was a quiet and peaceful scene. It was springtime, breeding season, and there was a 3 week or so old foal with the stallion’s mares. Still… no excitement.

I was not so much disappointed as curious, so I watched for awhile. None of the bachelor stallions challenged the herd stallion. Everyone accepted the social structure of the moment.

In fact, I have never seen one of these epic battles between stallions in the three years I have been visiting and riding in this valley. 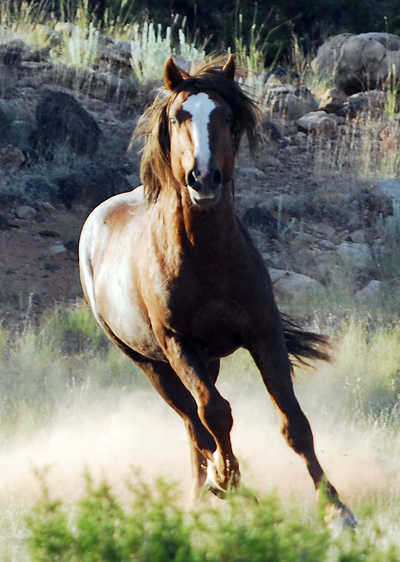 I certainly can’t say a battle never happens, but it is not the norm at all. Horses are peaceful, social animals, who depend on each other for comfort and cover. They are often the hunted and their strength comes in numbers, and numbers come in peaceful co-existence, not in epic herd splitting battles.

I’ve also learned that groups of horses are very territorial.

A few weeks ago we saw and tracked a stallion and nine mares west through this valley. Because they seemed so wary of us, we kept a small hill between us and them as we both moved west. As we came to the end of the hill we saw that the horses had circled around ahead of us and moved south. We continued to watch them and ride parallel to them for about a mile.

As we rode south we noticed that, without intending to, either we were getting closer to them or they were approaching us. We never rode towards them, we just tried to keep a parallel path, but just as I learned in high school math, our parallel paths were coming together. 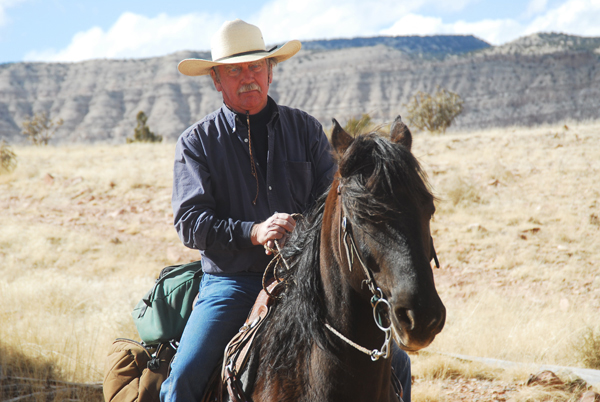 We stayed the course for several hundred yards and then suddenly, this group reversed direction and headed north at a dead run. We initially thought we’d inadvertently gotten ahead of them and turned them back. A few moments later we looked up and saw another group to the south of us.

This was their territory and the first group did not want to encroach. As it was getting late in the day we turned and headed back to the trailer.

The first stallion and his band is a group I have watched all three years I’ve been riding in the valley. I was not surprised to find them just west of where I parked as this seems to be there stomping grounds. I have also been aware that there are multiple groups in the valley, but I had not seen their territorial divisions so firmly entrenched.

Tracking from on Horseback

Tracking and watching wild horses from horseback has been a very interesting exercise. I was told never to ride at them as that would be perceived as a threat. Unfortunately, many horses out in the wild have been chased by people on horseback as a thrill seeking adventure-- fools, who think that a momentary adrenaline rush counts as a real activity.

A mounted horse can never catch a wild horse at freedom. However, if you ride along with them, even at a great distance, you will not be seen as a threat, and they may move towards you as we experienced the other day.

Early in my visits, I spent a lot of time with the first group I mentioned above. I never rode at or towards them.

Over time and several visits they became curious about this new horse and they began to approach me. On more than one occasion, they came within 75-100 yards of us. To photograph, I frequently dismounted and placed myself on the far side of my horse. The group would approach, always led by the stallion.

At times they would circle me at a full gallop to try and get down wind of us to get a scent. They are very curious animals.

The stallion might stomp his feet and snort a little but I never felt threatened. This is how I got some of my best shots. I rode quietly and peacefully and did nothing that could be perceived as an active threat. 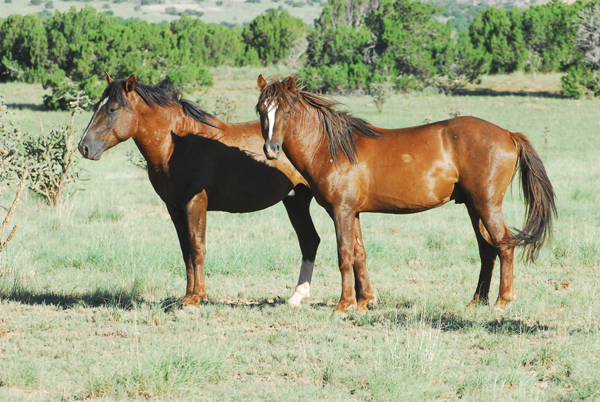 There is a risk in going out to this valley alone and tracking these horses. We are outsiders to these groups of horses and 50-75 yards is about as close as I would want them to come to us.

Herd stallions are very possessive, and I do not want to be perceived as a challenge to their dominance.

There are also predators that do keep the total number of horses down - mountain lions and maybe an occasional group of wolves that do pick off young foals. I do alert friends every time I go and when I get back and I carry a gun and a cell phone.

I do not encourage others to take on a project like this without a lot of thought and a rock solid horse. Cambridge Heritage and I have been together for ten years.

The old blood Morgans are a special horse, tough as nails but with a heart of gold. If you are a Morgan enthusiast, his breeding would be called strong Brunk and old government. Regardless of the breed, a horse for this type of project has to be absolutely loyal and as bomb proof as possible. 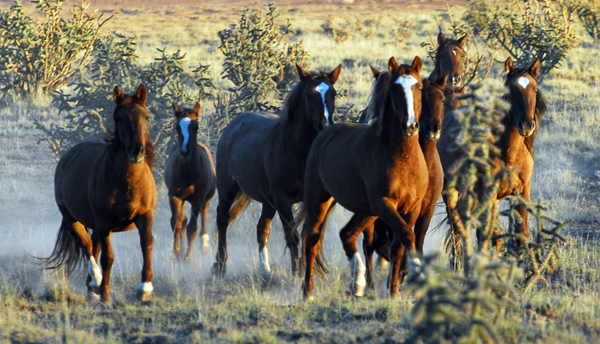 In the last few months I have I have been approached by horse photographers asking if I know a place where horses could be chased around so their workshop students could get some photos. I have learned, or decided to duck these requests because it just seems disrespectful of the horse. It is not how they live at all, and the photos are completely unrealistic.

I am a lover of horses, and watching them, either in the wild or in a domestic situation, has taught me a great deal about how they think and feel. This has helped me work with my own horses much more effectively.

There was a period of about a year when I did not visit the valley. I did go back in mid-February 2011 and was immediately reminded how much I love riding out there. I will go back soon, and will make many more trips in the coming months. There are multiple groups of horses in this valley, and no one knows just how many horses there are in the area.

In the coming months I will ride north and south and find and study some of the other groups.

Steve Simmons is an adventure travel writer and photographer and equestrian who rides, writes and runs an equestrian travel vacation in Albuquerque, New Mexico. He is the owner of New Mexico Horse Adventures.