Overcoming a Fall from Horseback- An Alaska Guide’s Family Story

After an Alaska horse guide's young daughter falls from her horse, it takes time and inspiration to heal and regain the confidence to ride the wilds of Alaska again.

Every single day alive, our lives are a true blessing. Knowing this and being thankful for this doesn’t stop the extra thrill I have and a blessing in my life as an Alaskan Wilderness horseback guide. Once in a while, a special moment happens and so many of my own moments were made all the more beautiful with horses. 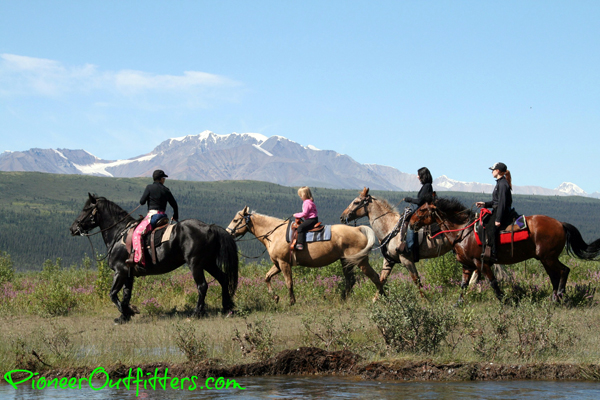 As plans were changing as fast as they were being made for Pioneer Outfitters Horseback Adventure Season and the Fall Big Game Hunting Season, one plan had stayed the same. A father and daughter were coming for a Summer Horseback Adventure–– one Adventure that had been, over two years in the planning.

Business was nuts, but the weather even crazier. Huge forest fires, horrendous winds, nighttime thunderstorms and beautiful blue skies were all an almost daily event. And still, deep inside Alaska’s Wrangell Mountains in a remote fly in area, life was blooming everywhere. 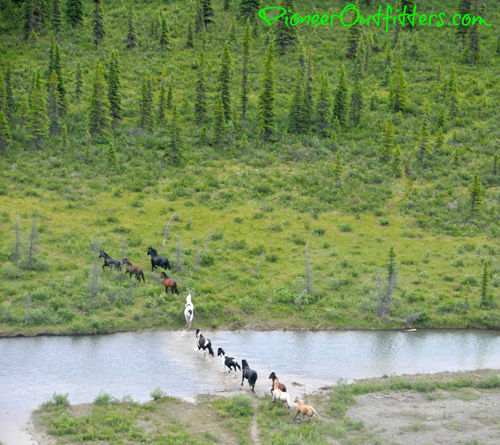 As a homeschool Mom, I also do as Mommas do, planning, doing and worrying about home and the kiddos and what we’ll do together next. The children have grown up living in Chisana, riding and interacting with guests that come here from all over the world. Growing up living year-round with the range horses as a part of their lives, both children have also grown up riding. 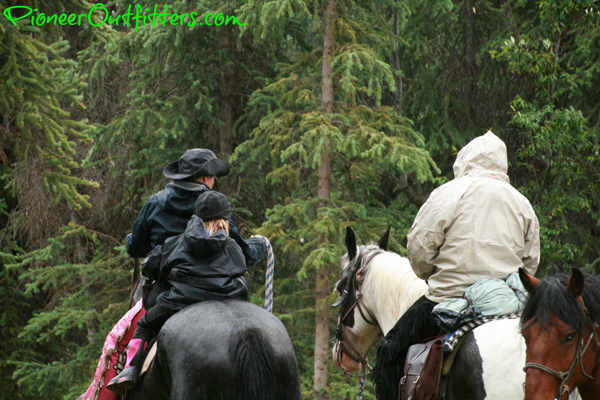 My littlest, the Alaska Chick-let, had a riding mishap last summer when she was 5 years old. A sudden and painful fall and a sprained wrist frightened her into refusing to ride alone again as she had been for more than a year. With a full summer of guests planned, I couldn’t help but worry that this was going to be very hard on my little girl.

The day finally came, the plane landed and a man stepped out and away from the plane, followed by a young woman with vibrant hair pulled through the back of her hat into a pony-tail. They had arrived! My cousin and his daughter were here in Chisana, Alaska. 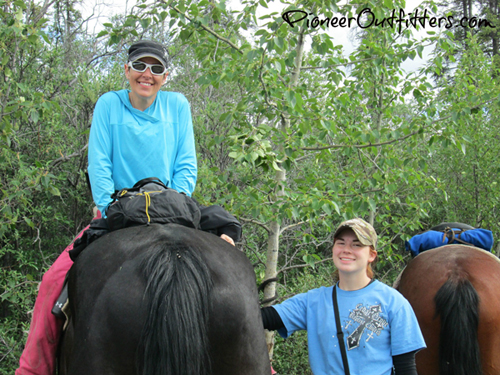 The following days were days of re-lived memories, shared laughter and incredible happiness, for my children and myself. More than the joy of simply enjoying them and sharing the indescribable beauty of what pulled me away so long ago was watching the pure adoration that my little girl had for this beautiful young lady, my cousin’s teenage daughter.

As the summer days went by we rode up mountains and across the vast tundra, ran and splashed with the horses in the river and explored the trails and abandoned mines from the last historic gold rush. Day rides and bonfires with picnics and cookouts mixed with games, hikes, fishing and fish wrangling. 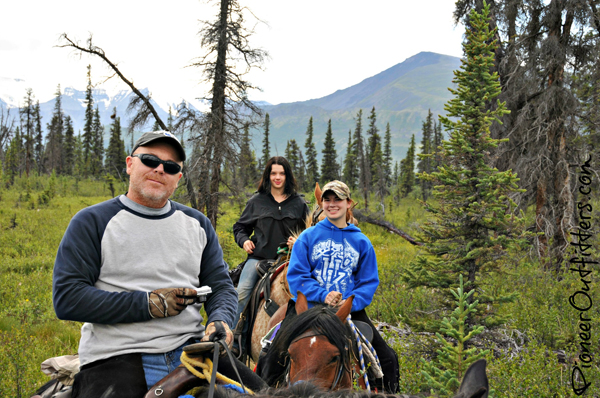 Planning a longer ride, I was almost thrown off stride when my little girl announced to one and all that she would be going along and she would be riding her own horse. Slightly concerned but not terribly worried because the first step would be taken at the barn and it would be fine when she changed her mind (as I was sure she would), staying behind with her Grandmother at the Lodge.

Still not terribly worried the next day at the barn and corrals as the littlest rider was sitting tall in her little saddle on her little horse. Led away from the corrals while the rest of the horses were saddled and readied for the day, lunches packed into saddle bags and jackets and rain gear tied on; I simply believed that she would soon be ready to move on to something else.

On these longer rides, it just wasn’t the thing to do, having her ride double with me, behind my saddle. Over the last year and a half, that is what we had done and it was pretty sweet having her with me on Thunder. We always stayed close to the compound and within a couple miles of the main Lodge at all times. Today would be different. 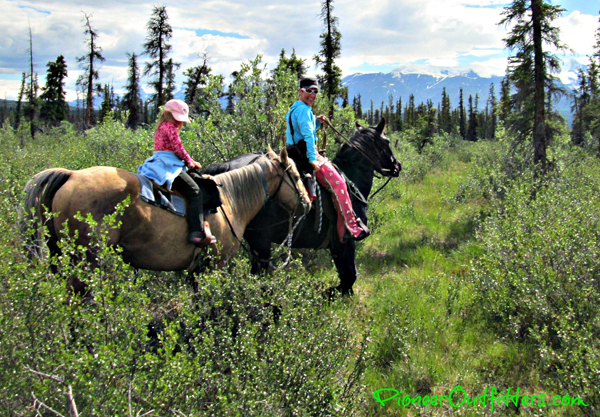 As we rode out, my own worries and tensions began to resurface; I wanted so much for this long ride to be as wonderful for our guests as the rest of their trip had been and not for one minute did I believe my Alaska Chick-let would be able to make the trip I had planned. How far would we have to go before turning around to bring her back? Would we still be close enough that I could leave the party and bring her back myself, returning to them in short order to continue on? Or would I have to turn the whole group around and back tracking, loose too much time to reach our final destination?

As we rode, delight overwhelmed all doubts and concerns as the laughter behind me told me that everyone was having a grand time. Riding past the old Chisana, the remains and cabins of the settlement that was part of what was called the largest log cabin settlement in the state of Alaska and where Pioneer Outfitters was born in 1924, I realized that this was as far as my little girl had ever ridden on her own.

We rode up through the timber and spotted a cow moose and a Spruce Hen with her young chicks. Riding these powerful and sure footed range horses were a huge change and thrill for our young cousin who was every bit as much “horse-crazy” as I was at her age. Unlike my own pasture riding and farm horses, Carly was an experienced English discipline rider and had spent years in the show arena. 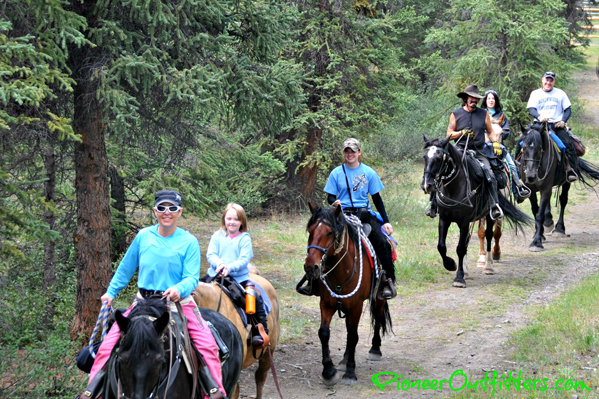 As we rode further, a deadfall log blocked our path on the trail and I turned around to lead my little girl’s horse around it and with her, the other horses would follow safely. Can you imagine my own surprise as she picked up her reins and put her heels to her little mare, Kantu (her name came from “anything a big horse can do, she “Kan-Tu”!) and proceeded to JUMP the log? And then, she had the spunk to look up at me with wide eyes and grin!

Riding up and down and across the terrain of the Alaska Mountains, we had a lovely ride and a beautiful day. We also all needed a break and lunch by the time we came back out of the mountains, so we stopped by one of the flooding creek fingers to stretch our legs, rest and have our lunch. 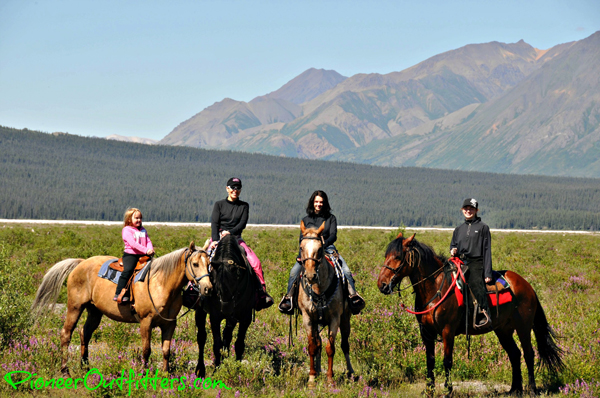 As we circled to begin our ride back towards home in the late afternoon, I looked back and had to laugh. My little Chick-let had dug some graham cracker out of her pommel bag and was feeding it to the horse her cousin Carly was riding next to her, giggling and looking as if it was the greatest trick a horse had ever performed.

We arrived back at the barn and corrals just before dinner was to be served at the Lodge and after sending our guests and my little Chick-let off to shower and change, I unsaddled the horses with Master Guide Terry Overly and my Alaska Guide Trainee, Makinzi. Aside from another beautiful Alaskan day and a great ride, we were so very proud of my little girl for all she had accomplished and done that day. Quick figuring told us we had ridden almost 15 miles. I couldn’t wait to go again and this time, I wouldn’t be worried!


About the Author: Amber-Lee Dibble, aka Alaska Chick’s Blog, is a Professional Alaska Guide and Manager at Pioneer Outfitters and a published author. “As you look, really look, and find no words; feeling both, your heart healing and filling to an inner bursting point and feeling that your soul has been laid open to the breeze and wind like a raw wound. This takes you beyond the physical, past the mental; this is the spiritual element. This is Chisana.” ~Alaska Chick

You can also find and chat with Amber-Lee and Pioneer Outfitters on FaceBook , on Twitter as @AlaskaChickBlog or on LinkedIn as Amber-Lee Dibble.