Off-Track Thoroughbreds & the USET- Back to the Future?

Do Off-the-Track-Thoroughbreds (OTTB's) make good competition horses? Karen Prell makes the case that OTTB's could have a bright future in the show ring, even at Olympic levels.

Now that the 2012 London Olympics are over, and we’ve all had a chance to catch our collective breath, are you, like me, wondering just what the heck happened to our equestrian team?

I cannot recall a time when our United States Equestrian Team came home with no medals. In fact the reason I can’t recall it is because the last time it happened was back in the year of my birth 1956!

You might say that our run from 1956 to now has been a long successful one, so why am I worrying, right? Well I’m not one to complain about such things, especially since we have been so successful in the equestrian division in competitions all over the world, but it made me look back over the team’s history. I looked at the riders and horses that made us so successful. I believe I have found a common factor to build on.

Evening Attire, who was donated, and his half-brother Tacticianor, rescued from the kill pen, enjoying retirement at Akindale Thoroughbred Rescue.

A look back at equestrian competition history- a common link

I thought back on the amazing horse and rider combinations with which this country has been blessed. If names like Snowbound, Idle Dice, Gem Twist, Touch of Class, Untouchable, Jet Run, J.J. Babu, Bally Cor, Might Tango and For The Moment tickle your memory and give you goosebumps, then you know where I’m going with this.

Together with their riders, Bill Steinkraus, Rodney Jenkins, Greg Best, Laura Chapot, Joe Fargis, Kathy Kusner, Michael Matz, Bruce Davidson, and more, all of these great partnerships were based on the heart, courage and stamina of the Thoroughbred.

I remember in New Jersey where I grew up watching Michael Matz amd Jet Run from ringside at one of the Grand Prix and thinking that I had never seen such an elegant and graceful pair over fences. I was privileged to see Rodney Jenkins and Idle Dice attack a course with such determination and force that there was no way they didn’t win the class. I can almost see the fences shaking in their standards when these teams hit the ring.

Two totally different styles, yet the same breed and the same results….winning. If Rodney and Idle Dice were “Rock n Roll”, Michael and Jet Run were Mozart, and they both “played” the courses in their own way and made it look effortless. In Eventing look at Bruce Davidson and his incredible successes which now seem to be a family affair as inherited by his son, Buck.

Sometime in the 80’s, we were hit by the Warmblood invasion and suddenly everyone had to have one……never mind the cost. The irony here is that most if not all Warmbloods have “some” Thoroughbred blood in their ancestry. At the same time we watched as the stamina we so loved in our Thoroughbreds was being overlooked for the two yrear old who could run a the quarter in less than :22 seconds!

Fast forward to today in 2012 with the economy just starting to shakily recover. We’ve seen the prices at racing Thoroughbred sales almost come back down to earth from the stratosphere where they had been flying like a tech bubble about to burst. It had to happen sometime and it did.

Couple that with the sport horse industry always looking for better, more competitive horses and looking overseas at expensive imports when the answer for both of these industries is right under our collective noses! 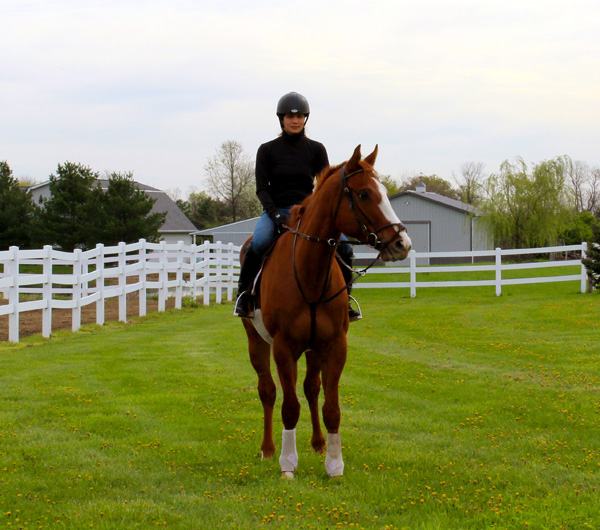 Raina Paucar, who's shared her story of retraining her OTTB, Bahamut, with Equitrekking. ©Edgar Paucar


While there are some Racing trainers out there who routinely look for homes for their charges after their racing careers, there needs to be an emphasis in the industry on actively finding new careers for those who can go on from the track. Trainer Nick Zito is well known for proactively seeking out new homes for those of his charges who have finished with the track.

I think a combination of the Thoroughbred breeding industry working in concert with sport horse buyers and competitors at the national level would be the solution to both of their problems.

We need the big breeders (i.e. commercial breeders) to step up to the plate and care about the horses they are responsible for creating and do the right thing by them. There are breeders who have been in the industry a long time, (Mary Lou Whitney comes to mind) who have already made it well known that they want to know if a horse that came from their breeding program is in danger, to get hold of the Racing authorities and get word to them. This, for the sole purpose of buying back one of “their” horses and getting them to safe harbor.

But why does it have to come to that? Why do we wait until these great creatures are so far down and in danger that it has to be an extraordinary circumstance (or miracle, if you like) that they get rescued at all?

Some are not so lucky. We should never forget the horrendous final chapters of Kentucky Derby winner Ferdinand or Exceller who both ended life in a slaughterhouse. Quite frankly it should never have happened in the first place and the shame is on us as an industry that it ever happened at all!

Equitrekking's visit to the Secretariat Center at the Kentucky Horse Park to meet Thoroughbreds, who are being retrained for new careers.

We simply must to do better on behalf of those who cannot speak for themselves.

Instead of pouring our buying dollars into importing equine partners from other countries, what about the hidden treasures awaiting us right under our noses? And let’s not even consider the importation costs over and above the purchase price of these imports!

I would like to challenge the breeders to create an avenue to market those Thoroughbreds who will never be the precocious 2 yr old that they want right now! We have enough sales venues in this country that I do not see why there could not be a Thoroughbred sport horse sale held in conjunction with those sales. 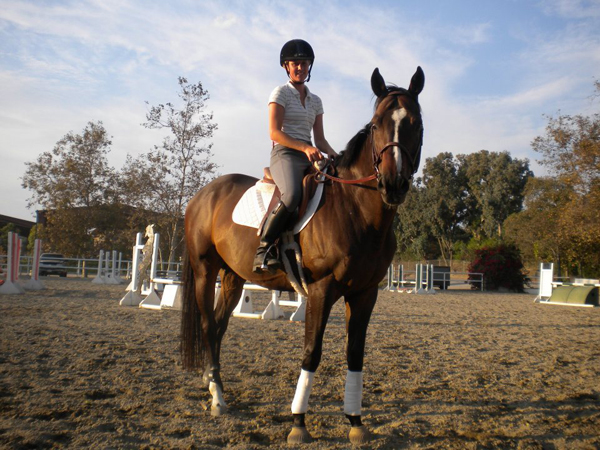 Megan Cavan and her OTTB, Cam, a successful adoption story.

This sale would not be restricted to only the young ones who are not suited to racing, but to those older horses who are in need of a new career. While the racing world would think that six or seven years old is “old” for a race horse, I can assure you that someone looking for a nice Hunter, Jumper, Dressage horse, etc. would have no such prejudice.

On the other side of this coin are the people who are buying horses to show. We have been so in love with the cachet (fad?) of buying the latest HOT breed that we’ve overlooked the suitability of other horses. Do we really want to be guilty of thousands of horses of ANY breed going to a dire fate just because we want the latest, greatest, most popular breed of horse?

Many of you might be too young to remember the story of Harry DeLeyer and his extraordinary horse Snowman. While not a Thoroughbred, he proved the value of saving a life. After Harry purchased him for $50 off of a truck headed for slaughter, Snowman repaid him many times over in the show ring. Together they accomplished amazing things over fences. It seemed there was never a fence too high for them. And yet, this horse was someone else’s throw away.

How about Bill Steinkraus amazing Olympic partner, Snowbound! Here was a “not so good” racehorse with tendon issues and yet when shown judiciously and ridden by a master, he became the horse that gave us a Gold in the 1968 Olympics.


One man’s trash is another man’s treasure. Never was that saying truer than when speaking of retrained racehorses. When one considers that in the Fasig Tipton sale coming up in October, they already have a book of over 1,200 yearlings registered and accepted for sale. Yes, you read that number right–– 1,200 yearlings! And this is just one of the many Thoroughbred sales that take place in this country multiple times of year.

For those of us who like to bring along our show horses from young stock, wouldn’t you just love to attend this sale and find a well conformed youngster, who for whatever reason doesn’t sell and actually buy him or her to take home? Maybe he wouldn’t be from a red hot sire, but for the purposes of us show horse buyers, who cares!?!

We all know that not all of these 1,200 yearlings are going to make it to the upper levels of racing. It’s the law of averages. But those youngsters could have a very bright future in the show ring. I could drool just thinking about the possibilities.

As a plus, it would not take very many years to see patterns of which sires produce the best show horses. For instance, the Man O’ War line was well known for producing horses with jumping ability. There is no telling what opportunities are being passed up by breeders who are either unaware of this additional market or who never thought about it as a viable venue for their “un-raceable” youngsters.

There are more and more shows being devoted to the Off Track Thoroughbreds and they are growing in popularity as more and more riders discover these hidden jewels for the show ring.

It is said that time waits for no man and right now this idea–– this opportunity–– is slipping into the future like a precocious two year old trying to run a hole in the wind. The time for these horses is now. The time to do something is now! As they say around the show ring… you can ride one or get beat by someone else riding one! The choice is all ours!

About the Author: Karen Prell, aka "Triple Crown Karen," came from a very non horsey, working class New Jersey family and started riding at age three. With over thirty years experience as a riding instructor, Karen is passionate about developing beginners into confident riders and compassionate horse owners. A favorite expresion heard often by her students is "It's ALL about the horse!" A lover of all things "horse," she is especially passionate about promoting the retraining of retired Thoroughbreds and adoption and rehoming of unwanted horses. Her ultimate dream would be to see the US Equestrian Team mounted on these great reclaimed athletes. Her career in media focuses on the everyday equestrian adventure and how a horse lover of modest means CAN make a difference for even ONE horse.