“This story was originally published in the October 2015 issue of NEBRASKAland Magazine.”

Competitive trail riders are one of the most eclectic groups of equestrians on the planet. From Wranglers to shorts to neon-colored breeches; from draft crosses to Arabians to sure-footed mules and ponies – riders and mounts of all disciplines and breeds can be found at competitive trail rides (CTRs), an equestrian sport that tests horse and rider skills and endurance.

Indian Cave State Park near Shubert is the location of one CTR, put on by the Nebraska Endurance and Competitive Trail Riding Association (NECTRA), which is sanctioned by the national organization, the North American Trail Ride Conference (NATRC). The Nebraska club was founded in 1974, and they have been returning to Indian Cave to ride for nearly four decades, making it the oldest CTR in the nation. Every fall, NATRC riders come to compete over the same set of winding trails – some of which are not open to the public – that offer views of the Missouri River from the park’s many hills and bluffs. 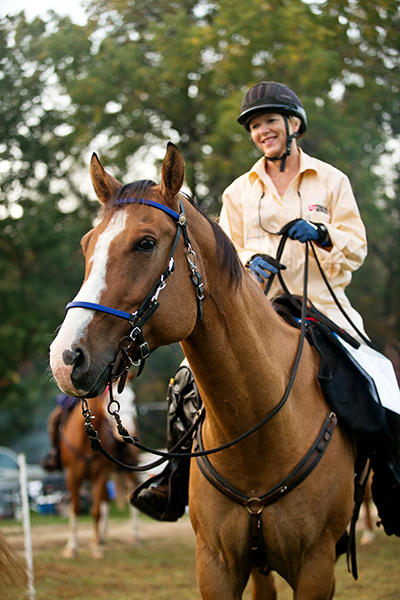 Margaret Reynolds of Kansas City, MO, and her Quarter Horse Dun Come Unzipped (“Sanka”) waiting to time out for the day’s ride.

Approximately 42 competitors came to Indian Cave State Park last year, which offers specific amenities for riders in its equestrian campground. Riders arrived Friday to set up camp, check in with accredited NATRC veterinary and horsemanship judges to ensure the horses were fit to compete, and go over the trail map, rules and expectations for the next day’s ride.

Unlike endurance riding, which is a test of speed where the first horse to cross the finish line wins, a competitive trail ride is not a race, and the fastest team may not necessarily be the best team. Rather, a CTR is a test of pace. Teams (horse and rider) have a set amount of time to complete the trail, depending on their division, and early or late arrivals into camp are penalized. CTRs are designed to demonstrate the bond between horse and rider: how well riders can pace their horses, how well- behaved teams are on the trail, how well trail challenges are performed, and how well-conditioned horses are found at veterinary check points. Depending on a rider’s division, teams may cover up to 40-60 miles in a single weekend.

There are four divisions of competition: novice, competitive/ pleasure (CP), open, and distance only. Novice is for riders and horses new to CTR; CP is for experienced riders who prefer the distance and pace of the novice division and are often members who offer mentoring to novice riders; open division is reserved for highly experienced riders with well-conditioned and trained horses; and distance only is for competitors who do not want to compete for awards but receive credit for their mileage. Novice and CP riders typically cover 30-40 miles in a two-day competition at 3 to 5 mph, while open division competitors cover 50-60 miles in a two-day competition at 4 to 6 mph. Designed to demonstrate high levels of skill and training, trail challenges are more technical in the open division. 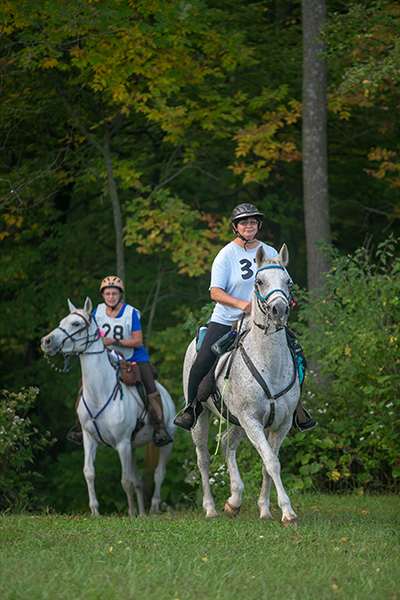 Endurance races are a great way to form bonds with your equine partner and make new friends.

In the 2014 competition, the oldest rider to compete was 72-year-old Noreen Altwegg of Kansas, and the youngest rider was her grandson, 14-year-old Ryan Clamm.

A Sport for All

“NATRC is the melting pot of the horse world,” said Sarah Rinne, vice president of the NECTRA and national vice president of the NATRC. Not only do riders of varying ages and backgrounds compete, but competitive trail riding is also open to any horse breed and type of conformation (body build and structure), as long as the horse is healthy and fit to cover the distance satisfactorily. The sport is not about pedigrees and expensive equipment.

“A horse with a sound mind that is respectful makes the ride much safer and enjoyable,” Rinne said. “Aside from conformation, soundness and fitness develop with experience and miles. Most horses can be successful with conditioning and training.” Long Slow Distance (LSD) is the training regimen recommended to beginners.
“Conditioning long miles with less speed develops skeletal strength, muscle endurance and metabolic efficiency. Trying to condition with too much speed and stress early into training with an unfit horse is more likely to result in injury or muscle damage that takes months to repair,” Rinne said. 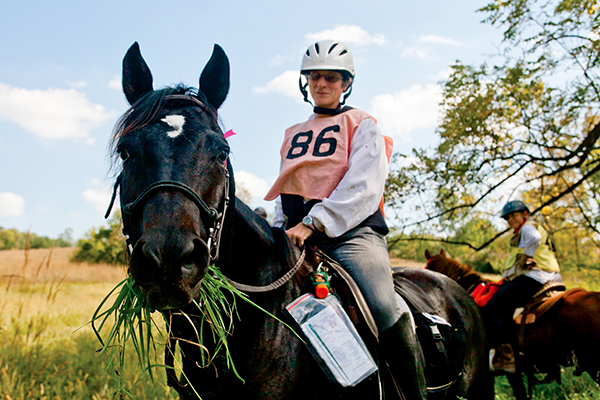 Helen Smith of Ashland, NE, and her horse Sasha, a Quarter Horse, Arabian and Thoroughbred cross, take their 10-minute break before presenting to veterinary and horsemanship judges. 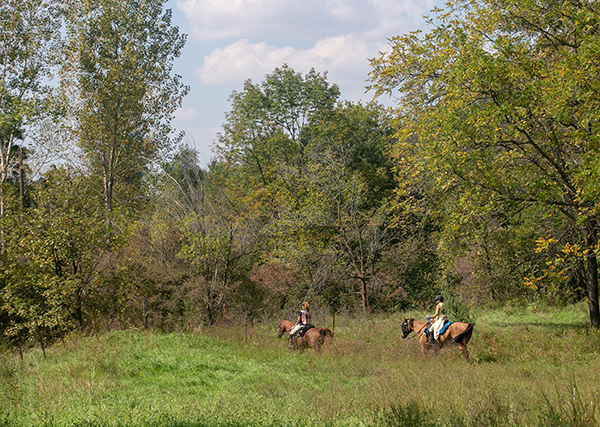 Many long-time competitors rode in specialized endurance riding saddles, while most new competitors tacked up with what they already own, whether English or western. All carried plenty of water in their saddle bags, along with a knife, a sponge dangling from a rope to cool down their horses at water stops, and a rope and halter. A trail map was given to each rider, while an accurate watch was necessary for pacing.

On Saturday morning, teams timed out with their division to ride on a clearly marked trail. In addition to completing the trail within a set time, horse and rider were also expected to fulfill several judged check points with a horsemanship judge and two pulse and respiration checks (P&R) with a veterinary judge along the trail. Each horse and rider had their own scorecard and all started out with 100 points; the rider’s scorecard evaluated  horsemanship skills and safety, while the horse’s scorecard focused on condition, soundness and trail ability/ manners. Point deductions occurred throughout the ride. Riders are able to take their scorecards home to practice the skills needing improvement or more work conditioning and training with the horse, Rinne said. Year-end awards are based upon accumulated points throughout the ride season.

Rider’s skill and equitation (form), as it applied to long distance riding, horse care, sportsmanship and safety on the trail, were judged, while trail challenges ranged from a combination of maneuvers such as backing, side passing and turns on the fore- and hindquarters.

“Those skills may be applied to challenges such as backing around a tree or up an incline, side passing over a log, and getting around natural terrain. Opening, passing through and closing a gate is common,” Rinne said. With the exception of gates, bridges and permanent structures, challenges may not utilize man-made or fabricated objects.

The horse’s scorecard was completed by the veterinary judge, who evaluated the horse’s stress and physical condition during the ride. These checks are helpful in detecting metabolic complications and lameness.

Riders dismounted when they reached P&R checks. Teams had 10 minutes to recover before examination by a veterinary judge, during which riders did all they could to cool down their horses. Volunteers from the club and the park followed closely behind to haul fresh water to competitors on a truck.

Sweaty saddles and pads were taken off, and the sponges and water came out. Many riders used water bottles to spray down their horses’ necks and legs, while others cooled down their horses with hand fans. Sometimes, gently rubbing horses’ ears and faces or speaking softly will help to calm them down; each person had a different method of cooling down their horse.

If the horse’s pulse and respiration count (breaths in a 15-second count) did not meet criteria after 10 minutes of rest, point deductions occurred. In extreme cases, veterinary judges may pull a horse from competition, though most riders will take this step on their own accord in the best interest of the horse, Rinne said. 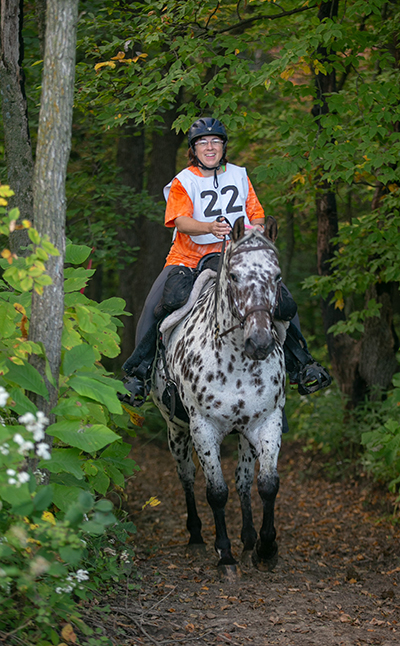 All types of horses and breeds are out on the trails!

Upon completion of the ride on Saturday, which lasted five hours for the novice and CP divisions and 6.5 hours for the open division, veterinary judges performed another thorough health check of all horses to ensure their fitness for the next day’s ride. A Saturday night briefing was held to go over the trail on Sunday. Sunday’s ride was much like the first day, but with a new set of trail challenges. All teams were on the trail for a total of five hours, though the open division traveled farther and faster in that time. At the end, the veterinary judge conducted one last examination, which marked the completion of the ride.

In the competitive trail ride at Indian Cave State Park in September 2014, the open sweepstakes (overall) winner was Pistol Annie, a mule ridden by Patti Dollarhide of Kansas, and the novice sweepstakes winner was T-Bone B Blacky, a Morgan, ridden by Kerri Ross of Nebraska. The competitive pleasure division took a high point combined horse and rider score; the prize was awarded to Lethal Status, a paint horse, ridden by Sharron Ankersen of Nebraska. Prizes were also awarded to the winners of each class.

That a mule, a Morgan and a Paint Horse were the 2014 sweepstakes winners demonstrates almost any horse and rider can be successful in competitive trail riding, as long as teams possess soundness of mind and body. Though it may take months of training for a new member, CTR is a great sport to meet fellow equestrians and to keep horses and riders in shape throughout the year.

“People do not have to compete to be an asset to our organization,” Rinne said. “Our sport does not function without valuable volunteers, and each and every person’s contributions are appreciated.”

The Nebraska Endurance and Competitive Trail Riding Association (NECTRA) was founded in 1974. In addition to organizing competitive trail riding events and advocating the sport, the NECTRA has always been active in building and maintaining the existence of trails for all outdoor users. The founding members of the club were the same people who put in trails at Indian Cave State Park – prior to their work, no trails existed there.

The organization has continued to donate both labor hours and financial support to Indian Cave SP, including improvements to equestrian campgrounds by purchasing hitching rails, trail supplies such as culverts for crossings, and members also built a picnic pavilion in the horse campground, NECTRA Vice President Sarah Rinne said.

“This is an important part of the work that we do – without trails we do not have a venue for our sport. We care about trail preservation and maintenance for all trail users,” Rinne said.

Today, Indian Cave SP offers 16 miles of equestrian trails, 12 horse corrals and numerous tie posts at each primitive campsite in the equestrian area. Each campsite has a picnic table and fire ring. A water wagon is provided during the summer and fall seasons (weather dependent), and a new vault toilet is provided in the camp as well, said Kevin Holliday, Indian Cave State Park’s Superindendent.