Three of the best routes of historic significance for Old West trail riders.

by Darley Newman, as published in her column in True West magazine

Growing up I heard the inspirational story of Lemuel Bolz, a 16-year-old relative who crossed four states on horseback in the late 19th century. When the family could afford only five seats on the train, its eldest son journeyed on horse for five months to his new home in Yakima, Washington. Following in his tradition, here are three of 19 National Historic Trails that have made it onto my trail riding bucket list.

From April 1860 to October 1861, men on horseback carried U.S. mail in their mochilas from St. Joseph, Missouri, to Sacramento, California, in an unprecedented 10 days, a feat that can be relived today during the annual Pony Express Re-Ride organized by the National Pony Express Association (NPEA). 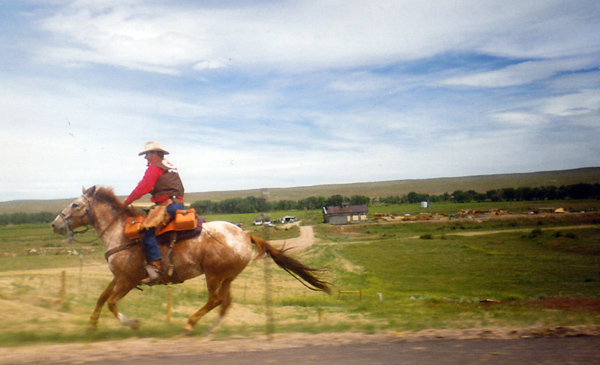 In the re-ride, more than 600 riders cross over eight states for 1,966 miles, with each rider traveling on average one to two miles, while some ride a lot longer. Since the trek is continuous for 24 hours, some riders have the night shift, which is the most challenging part of the trip, says Les Bennington, past president of the NPEA, who has done the entire route for the past three years.

Experienced equestrians can participate as a rider, while non-riders may volunteer as wranglers. This year’s ride is from June 8-18, 2011, and starts in St. Joseph. Learn more at Pony Express Home Station.

From Wood River, Illinois, to the mouth of the Columbia River in Oregon, the Lewis & Clark Trail traverses more than 3,700 miles. You will surely earn bragging rights riding the Lolo Trail, a Nez Perce buffalo hunting and trading route before the Corps of Discovery traversed it on its 1805-06 expedition.

The terrain of the unforgiving Bitterroot Range of the Rocky Mountains hasn’t changed much since the Lewis & Clark expedition. Tony Lowrey of Triple “O” Outfitters says you can surely get lost in those craggy mountains if you don’t know your way. 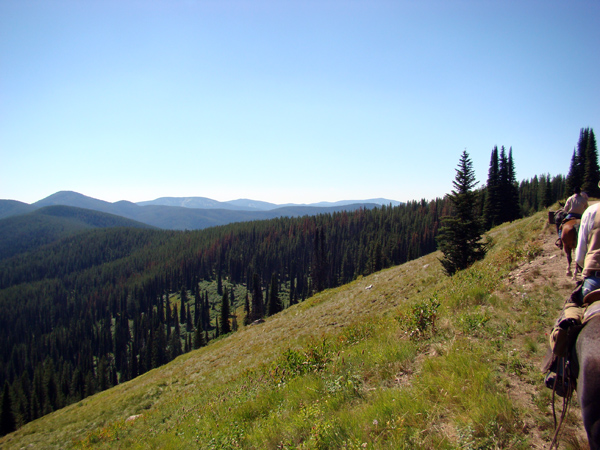 From the last week in July through the first week of September, you can join one of Tony’s groups on a multi-day camping and riding trip on the Lolo Trail. You’ll fare better than when an already tired Lewis & Clark suffered through the Rockies in mid-September, facing frostbite, dehydration and malnutrition.

A highlight of the ride is the Smoking Place, where, in June 1806, Lewis & Clark shared a pipe with their Nez Perce guides. Tony favors this high ridge because of its surrounding “sea of mountains,” which Lewis wrote about in his trip journal. “We were entirely surrounded by those mountains from which to one unacquainted with them it would have seemed impossible ever to have escaped.”

Long distance rider Doug Reynaud, with the Santa Clara County Open Space Authority, has ridden part of the challenging Anza Trail that runs through the Henry W. Coe State Park, about an hour’s drive from San Jose in the Mount Hamilton Mountain Range. The heavily wooded steep canyons and maze of boulders make for difficult navigation, which Anza wrote about in his journal in 1776.

Anza trekked through the park on his way from the East Bay back to Monterey, writing, “To this place, as well as to all of the foregoing country, we have given the name of Sierra del Chasco, because of the disappointment it has played on us by its difficult passage due to its width, which nobody had anticipated.”

Today’s horse and rider should be fit and experienced on these 15 miles of the Anza Trail, another destination where landscapes haven’t changed much since Anza’s expedition. Look for the re-enactment plaque at Los Cruceros, a famous stop on Anza’s route.

Travel Tip: Consider bringing these famous explorers’ journals with you on your treks to fully appreciate the history that comes alive as you ride National Historic Trails.

Learn more about horseback riding around the world in the Equitrekking Vacation Guide and EquitrekkingTravel.com.