In the historic Roman city of Jerash in Northern Jordan, I was able to try one of the most unique equestrian experiences I could have ever imagined, riding in a horse drawn chariot- rather racing- as a part of RACE, Roman Army and Chariot Experience.

It’s the NASCAR of over 2000 years ago, a fast, exhilarating Roman chariot reenactment race in the well-restored city of Jerash. If you go to participate, you’ll definitely want to bring a sense of adventure. I had mine and was still giddy as I raced around the hippodrome.

You can hear and see the action in this short video clip from Jerash.

An hour earlier, I had sat along with the audience, listening to the trumpets announce the performance. The RACE show is open to the public and features forty-five legionaries in full amour demonstrating drill and battle tactics, gladiator fights and Roman chariot races around the historic hippodrome. The show is kitschy and engaging, as the audience decides who gets sacrificed during each ‘fight to the death,’ but also educational. The creators have tried to be historically accurate with the performers' clothing and gear.

Jerash is about a 50 minute drive from Amman, Jordan’s capitol. The scenery changes as you travel North, becoming much more hilly and fertile. Jerash has been called “the Pompeii of the Middle East” and is a major attraction in Jordan. Once a part of the Decapolis, a federation of ten important Roman cities in the Middle East, Jerash is thought to have been inhabited as far back as the Bronze Age. I hiked around the city’s colonnaded streets in the morning, exploring its impressive theatres, temples and public squares. 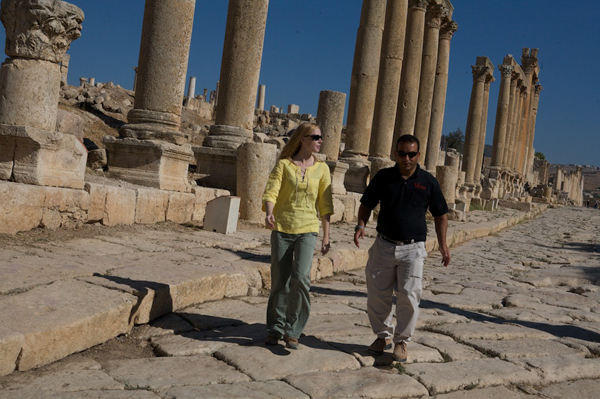 Walking through the streets of Jerash with my Jordanian guide.

At the Temple of Artemis, my guide demonstrated the supposed shockproof construction the Romans employed by placing a spoon and rock in a small opening at the base of one of the columns. He wanted me to put my finger in the small space, which I did for a second, but as soon as I felt a slight pinch, I was out of there! The columns at this temple are said to sway in the wind and might have been constructed this way to withstand high winds and possible earthquakes. If you stare at them, it’s hard to tell. My guide had a better way to prove this. Since it wasn’t windy out, we gave a push to the large stone column and it began to sway, moving the spoon up and down. Whatever the reasoning behind this construction, these columns have lasted a long time, even with all of the tourists doing the spoon trick. 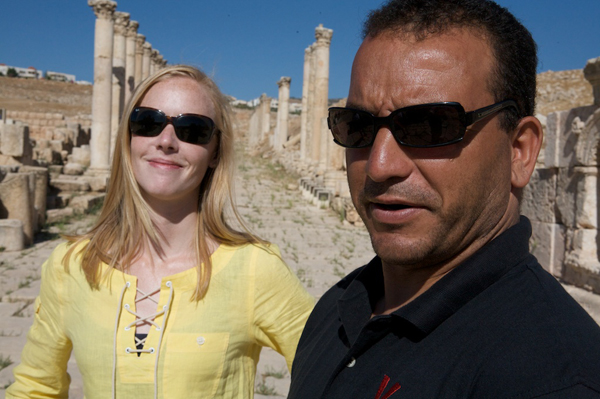 Having a good local to guide you in any place is key! My guide Ibrahim was knowledgeable, quirky and fun... a great combination.


After the RACE performance, I left the shaded portion of the hippodrome to get a closer look at the chariots. Of course, to enter the arena, I had to dress the part. I pulled on a burgundy colored toga and completed the ensemble with a heavy belt and fake sword. As I examined the chariot, Stellan Lind, the Swedish history enthusiast who started RACE, told me about the design for the chariots they use in Jerash’s reenactments. Lind is obsessed with the movie “Ben-Hur,” and after watching it in the 1970’s he decided that he had to create "Ben-Hur" somewhere in the world. That somewhere is Jordan and Jerash is the perfect location. From the 1st to the 7th centuries AD, chariots were raced around the same track where the RACE chariots compete today.

Lind told me that the chariots in the movies, like “Ben-Hur,” are much heavier than they would have really used to race in Roman times. The chariots in the show in Jerash are in between the really lightweight chariots the Romans used to race, constructed of willow rails and wood, and the heavier, more visually pleasing, movie chariots, which were more in line with ceremonial chariots. That made sense to me. If you are actually racing, you want the lightest, smallest chariot possible. 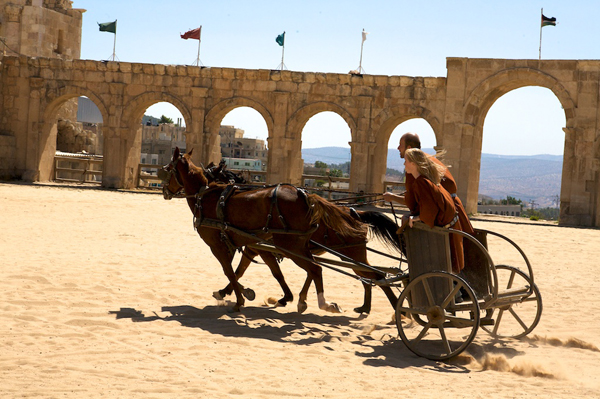 Too fast! Slow down! My wild chariot experience inJerash.

Ibrahim, one of the horse trainers who races these chariots himself, asked me to hop abroad for a few laps around the hippodrome. Ibrahim’s English was good, but not perfect, and I emphasized that I didn’t want to go too fast. The chariot felt a little rickety, maybe too light for me, as the wheels began to turn and we started off. I wasn’t sure if Ibrahim understood me or not as we began trotting and then cantering around the arena. As we picked up speed, I gripped the front of the chariot. We were going fast and Ibrahim definitely didn’t totally understand slow down. That or he wanted me to get the full picture of what the Romans felt as they raced.

It was fast and bumpy and those turns are not for the faint of heart! Hippodromes are not circular tracks, but ovular, meaning the two end turns are sharp and treacherous. The turns were the most exciting part of the race for spectators of old, as that’s where your biggest chance of having an accident or having our opponent sabotage your chariot occurred. I felt like we might topple over at any moment, as we shakily rounded one end, balancing as best we could. Even though I knew Ibrahim had done this countless times, I nervous and also exhilarated as we quickly took off down the straightaway. It was an intense ride and we weren’t even racing anyone else!

You can experience RACE in Jerash twice a day Saturdays to Thursdays (11AM and 2PM, except Tuesdays) and once on Fridays at 10AM. Visit RACE’s website or experience the show before or after Equitrekking Travel Jordan vacation.