Mustangs and Mud: Volunteering at a Wild Horse Sanctuary

My unique experience caring for wild horses at Monero Mustangs in New Mexico.

When I first drove up to the gate of Monero Mustangs, a wild horse sanctuary in New Mexico, I saw several groups of mustangs roaming around freely on the other side of the fence. I also saw the two-foot deep mud and snow mixture that I was about to plow my little economy sized rental car through. Even though I’d have a “grand” muddy entrance, I knew this was the place I wanted to be–– volunteering with wild Mustangs.

The first thing that I noticed about the ranch was that there were no barb wire fences separating each herd, only vast endless meadows, forests and mountains welcoming stallions to battle and steal mares from other bands as they would naturally do in the wild. 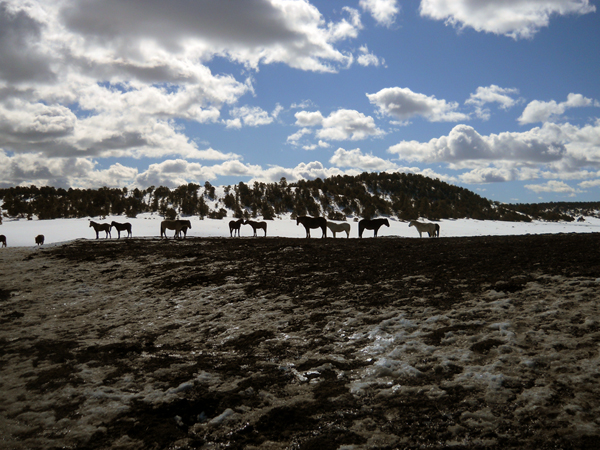 While working at the ranch, I lived in Abiquiu, a town only an hour south of the ranch. While Abiquiu had barely gotten any snow from the storm that had gone through that first morning, at Monero Mustangs the snow blanketed the ranch with a perfect sheet of white that made the horses in the distance seem even more surreal than they would have on an average day.

As incredible as the ranch itself was, I continue to be inspired even today by the strength, love, and enduring resiliency of the woman who has dedicated her life to caring for and overseeing the entire herd of about 100 wild horses on 5,000 acres–– Sandi Claypool. While volunteering for Sandi, I saw firsthand the commitment she has to not only the horses but every animal on the ranch. 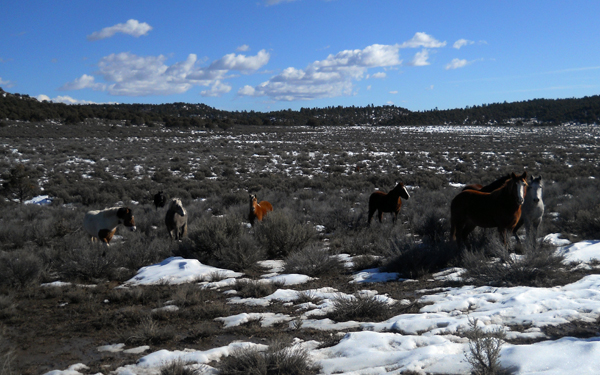 Mending Fences and Galloping with the Herd: The Work of an Equine Volunteer

By the time winter had started to fade, we were having warm days and even rain occasionally. The mud was forming into a more solid entity that cars, especially rentals, could handle a lot more easily. All this new traction allowed for some new automobile adventures, giving us access to places on the ranch we hadn’t yet seen.

One such adventure centered around the large, ever present population of Elk that roamed freely on the ranch. Elk have the unique ability to do intense damage to fencing. It is a constant battle to go out and check the 5,000-acre fence line for holes and openings that could potentially allow horses to escape. 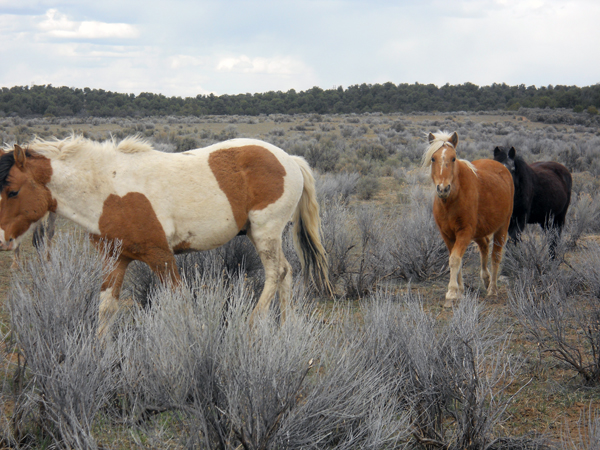 While driving around for hours inspecting the fences and correcting any possible issues, I was able to watch firsthand stallions battling for mares and colts, trying to copy and learn from their stallion fathers.

Some days volunteering on the ranch were spent trying to remove excess hay from the floor of the hay barn. Other days we were able to hop on two older mares that were previously domesticated and now running with the herd. These old mares took us galloping through the meadows, forests, arroyos and up and down as many hills as we asked them to.

Perhaps my favorite part of these rides was when the herd that these two mares now belong to joined us and we were galloping through the fields and woods of the ranch. Styles, the stallion leading the band that was following close at our heels, made sure to keep his band together whether they were being ridden or not. Riding in and alongside the herd was one of those magical moments that people who love horses dream of experiencing, and I was so lucky to get the chance to live it. 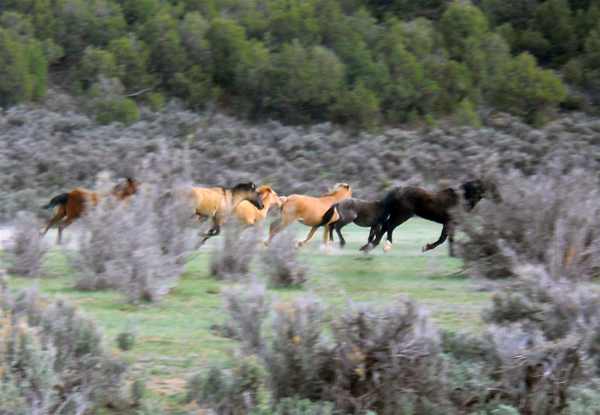 When someone decides to commit themselves to working with and for wild animals, you take on more than just a responsibility to keep them healthy. Allowing them to roam as they would in the wild, where mares can choose stallions and stallions act as they naturally would, while still keeping the population contained to a manageable number, requires more than a typical days work for most people. Sandi has created a ranch where the horses can flourish and maintain a healthy weight while being able to monitor them and keep a close eye on each and every one.

At Monero Mustangs, many of the horses are gelded, however, we were lucky to have access to a form of birth control called porcine zona pellucid or, as it is commonly called, PZP, as well. PZP has around a 90% efficacy rate and lasts for a year, yet perhaps its best feature is that it is completely reversible. Even if a mare is potentially pregnant it can be darted into her rump from a relatively far off distance, making the drug user friendly as well as a less traumatic experience for her. If a mare receives the birth control but is in fact pregnant, it will not affect the foal she is already carrying. PZP can even be used on mustangs in Bureau of Land Management (BLM) areas. Recently there has been a push by wild horse advocates to encourage this type of birth control as opposed to traumatic and herd destroying round ups.

Becoming a local celebrity definitely has its benefits. When the local Forest Service bring in horses from the remaining herds in the El Rito area, Sandi is on the list of people to alert. She is particularly fond of this group of horses since they are descendants of the strong little Spanish horses that she is focusing on trying to preserve. Most of the time, Sandi is charged the standard going rate of about $125 per horse, but there have been several occasions when she has been able to get them for less than a fourth of that price. Since beginning the sanctuary, there have been occasional foals born that she allows to grow as they would in the wild and discover for themselves what it is like to be a wild horse.

When you’re the one naming the horses, it is easy to remember everyone’s names, but keeping track of their background, parentage, and geographical history and then being able to explain it to visitors is more difficult. In addition to naming horses, Sandi coordinates tours for sponsors and visitors, plans feed schedules and monitors the individual health of all of the horses out on the range. She also takes special care of the horses that need extra attention. 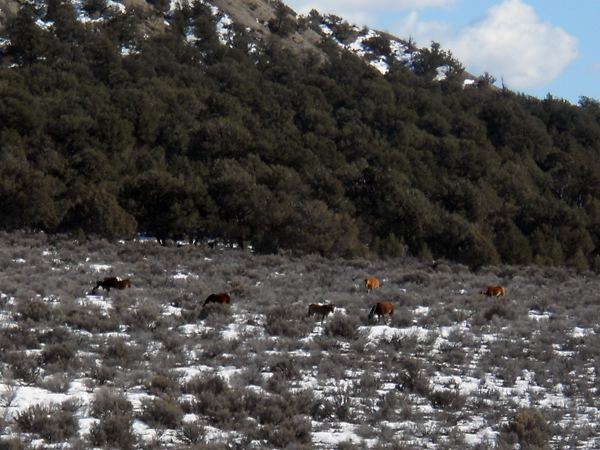 Cromado, one of the colts to which Sandi paid particular care, was badly injured. He had somersaulted over a panel and seemed to have little to no future ahead of him. Several veterinarians and horse care professionals told Sandi he was a lost cause and spending time and resources on him was a waste of time. True to herself and her cause, Sandi refused to give up on the little colt.

Since he was still able to lay down on his hip that had been smashed into pieces a few months before, but was having trouble regaining the strength to stand, Sandi fashioned a harness that allowed her to pull him to his stronger side. This gave him the boost he needed to get back up to a standing position somewhat on his own.

After his hip regained most of his strength, he then began to face a new challenge. Over the long months it had taken him for his hip to fully recover he was kept on soft footing in order not to reinjure himself further if he fell again and to allow the hip to heel. While he was on this footing, he was seen regularly by a barefoot trimmer. They had to work to maintain a healthy young hoof and ensure the heel bulbs and frog had not begun to pinch together, which would cause severe health problems in the future for Cromado.

We devised a method to let him stand long enough to be trimmed comfortably and without throwing him off balance from his already fragile legs. He was put in his sling, which was attached to a pulley that hooked up to a high beam. This allowed us to hoist him off the floor just enough to enable Cromado to lean into the sling while one hoof was carefully trimmed. After much improvement in the strength of his hip, he graduated to a bigger pasture with different types of footing throughout. 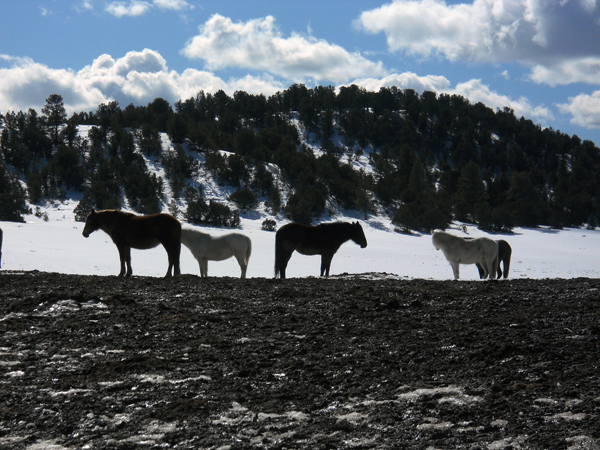 As a volunteer, I was able to help make him a small enclosed area with gravel, pebbles and rocks that he would hang out in for several hours a day to strengthen the muscles in his legs and allow his hooves to self trim while stretching the deep flexor tendons that had been so weak for so long.

Being injured and subsequently separated from the herd for several months, one issue that Cromado had was that he was beginning to lose the natural herd behavior that he would learn on his own in the wild. Being isolated during his recovery, he wasn’t being naturally socialized. A young colt mimics behavior from the stallion and mares that teach him manners and etiquette that are crucial to surviving in the wild. I worked at Monero Mustangs and with Cromado for several months. By the time I left, he was on his way to making a miraculous recovery.

On last update, Cromado is doing much better and has even been given a filly the same age to keep him running and moving constantly while allowing him to practice interacting with his fellow horses. Cromado is just one example of the amazing recoveries of horses that would have been given up on if not for the attention and care of Sandi Claypool and Monero Mustangs.

What My Volunteer Experience with Horses and Sandi Meant to Me

The more time I spent at the ranch and with Sandi, the more I realized how being passionate and driven can allow you to achieve whatever it is your heart is set on. When I first heard about Monero Mustangs I had no idea what I was in for. My initial reaction to the majestic fields and snow and even mud made me believe that this place came from one woman’s dream and dedication. Over and over, her persistence to keeping her horses safe and in a healthy and natural living environment gave me the motivation to not only figure out what it is I want for myself, but to not be afraid to go for it. 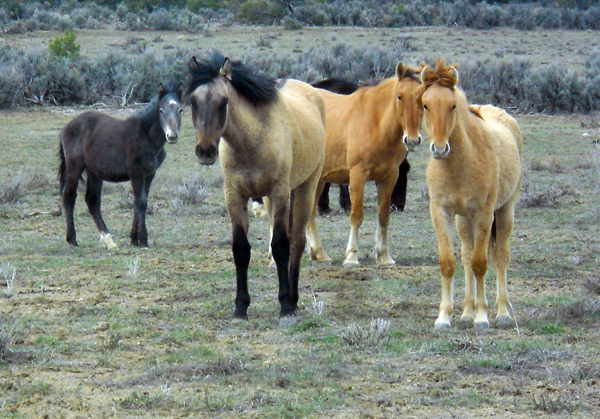 My passion and love for researching and learning about Mustangs may seem a little crazy to most people. I’ve come to the conclusion that by learning more, I am able to bring my experiences to more people and hopefully one day in the future will be able to do something even more helpful with all of my information and experience.

For now, I plan to continue to seek out Mustangs in all shapes and sizes and meet and learn from the people who have centered their lives around them. By the end of my time volunteering at Monero Mustangs’ ranch, the mud had turned to lush green pastures filled with sage and pine trees. Herds of Mustangs ran happily through this idyllic setting, which made my initial trudge through the mud in my now very dirty rental car completely worth it.