Serendipity- My Journey from Middle-Aged Author to Mounted Archer

Life is ever changing. At the ripe old middle age of 51, I got my first horse—my childhood dream come true–– and learned mounted archery.

Serendipity best describes my journey from middle-aged author to mounted archer. Yes, mounted archery, shooting a bow and arrows from a galloping horse just as I remember pictures of Plains Indians charging buffalos on painted ponies, or a Mongol horde sweeping across the Eurasian steppe with unstoppable fury. Thinking about it, I imagine the ground rumbling under my feet. 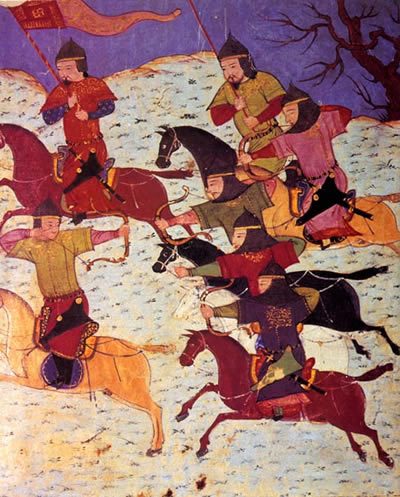 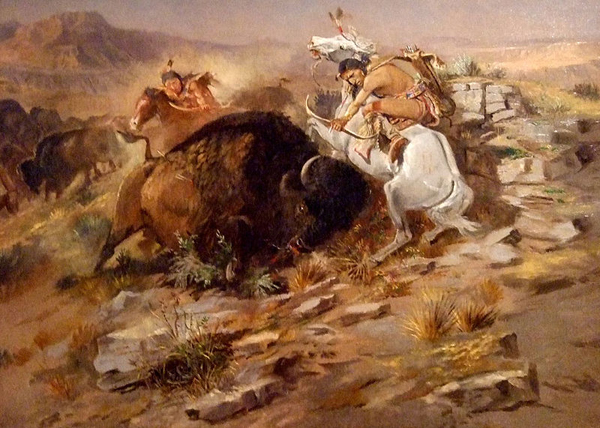 Introverted and creative, I existed in the eye of the storm of a dynamic, active family, their lives and activities swirling around me with the energy and unpredictability of a hurricane, while I manage schedules, stock the refrigerator, clean and garden. I also write historical fiction, about a seventeen year old mounted archer in medieval Ireland (which sounds eerily like Disney's, Brave), and of course, she rides a magnificent gray courser. Life is ever changing, and at the ripe old middle age of 51 I got my first horse—my childhood dream come true.

The Search for a Horse

Two years and two horses later (long stories), in 2008 I was looking for a palfrey. A Brazilian friend insisted I consider a Mangalarga Marchador. A Mangamarchawho? I learned that it is the national horse of Brazil, but I had never heard of this breed. She put me in touch with Susan Neumann, and I trekked from my home in Santa Cruz, California to Cascade Marchadors, and future home of Cascade Mounted Archery Center, in Bend Oregon.

Overwhelmed with horse possibilities, I came home empty handed. In 2009 I returned to Bend, this time with my husband Russ along for the ride. While I found my dream horse, Desejo, my husband learned an archaic sport, mounted archery, from gold medalists Holm Neumann and Katie Morwen Stearns. Even though my husband took to mounted archery with enthusiasm, I begged off. Remember, this is what I write about. Why did I turn my head away, averse to try what I so eagerly wrote about?

My husband continued with clinics and competed in the first international mounted archery competition held in the US in October, 2010, earning awards and friends from Korea, Japan, Brazil, Poland, Germany and the UK. I joyously stayed at the R-Wild Horse Ranch (a communal ranch and equine facility), pursuing my three “R's”, reading, 'riting, and riding. I played with Desejo, dreaming about extreme cowboy races, garrocha and dancing with my horse. Am I too old for eventing? I completed a manuscript, filled with horses and archery. But I still refused to try mounted archery myself.

February 2011 I had a bad fall from my horse. He tossed me like last week’s fish, dragged me, trampled me and ultimately ditched me on one of the Black Diamond trails. “Peasants make good traction,” I remembered from one of my books (note to self, watch what I write, I may have to live it). After assessing my injuries––No breastectomy, no hemorrhaging, and no head injuries (thanks to my helmet)–– and using my fanny pack as a sling, I hiked the mile-of-shame back to the barn. Every breath felt like I wore an Iron Maiden. I had a snapped clavicle, and a piece of bone had broken loose, looking like a calcium asteroid on the X-ray. I also suffered bruised or cracked ribs.

Broken bones aside, I had a broken heart. My dream horse and I were not bonding. After nearly two years, he was more sensitive and reactive than ever. Though I tried different methods of whispering with several clinicians, used a bitless bridle, and a treeless saddle, Desejo still turned his head way, telling me daily, he didn't want to be with me. While recovering I had plenty of time for soul searching and reflection, during which I concluded I was a reject, loser, poor herd leader, and bad horse-mommy. What truly broke my heart was my failure to make Desejo feel safe and comfortable.

Of course, I couldn't ride. With the figure 8 device and a sling, my right arm was tucked to my chest like the arm of a T-Rex. I also couldn't write. Two of my “R's” were stripped from me. I could barely hold a book, but with my left hand on mouse or keyboard I found solace in social networking. My Facebook friends consoled and inspired me with anecdotes, articles, blogs and funny postings, many with irreverent, black humor to compliment my own.

I met Roberta Beene of Rogue Mounted Archers in a subsequent visit to Bend. Roberta is a visionary with an unrivaled passion for mounted archery. She invited me to her new Facebook group, Amazon Archers. I'm no Amazon, I insisted. I'm not one of you; I'm a wife and a mom and an author. But I joined the group and found a global tribe of horse lovers, archers, writers, bowyers, medievalists, and entertainers. We wrote, conversed and shared.

Ten weeks post-wreck, Desejo and I took a clinic with Jim Barrett, a former mounted police instructor, clinician, and author, focusing on desensitization, fear issues and equitation. This was my first time back on Desejo. For weeks I had been questioning what to do about my horse. The resounding sentiment from friends played in my head every day: Maybe he's the wrong horse for you. Jim Barrett had an accurate read on Desejo and me, and over the course of a two-day clinic, helped me understand my own failings as well as Desejo’s temperament. Specifically, I learned…

How to comfort Desejo by helping him release endorphins, which are brain chemicals (“endogenous + morphine”) that provide a sense of well-being. Horses have six trigger spots that release endorphins when massaged: 1) the tips of the ears; 2) the poll; 3) the socket just above the eyes; 4) in the junction between the upper lip and gum line (believe it or not); 5) the base of the withers; and 6) at the dock of the tail. By massaging these spots we give our horses relief and comfort. I also learned to improve my leadership by practicing clear cues and being firm, assertive, consistent, and calm. And like Desejo, I learned that I’m too reactive. My hands are very soft, but too fast; same with my legs and seat.

Endorphins are just what the sensitive, reactive horse needs to bring him back to the thinking side of his brain. Desejo is becoming an endorphin junkie dropping his head for a poll massage. I use the wither spot from the saddle like an emergency brake, although not nearly as fast.

Observant horse people have noted, our horses are a mirror into our souls. Desejo and I are introverts, reluctant to step forward in a crowd, very sensitive and at times—the mirror doesn't lie—many times, over reactive to stimulus and feelings.

With Jon Barrett (Jim's son and our Barn Manager) as my coach, I am learning to be the rider Desejo deserves.

Without the loving care and devotion of my husband and daughter, and my son's full time care of my mother, I would still be recovering! As I've said, “It takes a village to heal an idiot.” I'm back to my three “R's”: Reading, 'riting, and riding.

Two months later Susan and Holm Neumann hosted a mounted archery gathering featuring two master archers from Korea in Bend. My Amazon Archer friends from far and wide were coming. Russ and I jumped at the chance, and together with our three geldings headed back to Oregon. For my part, I only wanted to ride and schmooze. Or so I thought.

Twenty of us, adolescents to septuagenarians, from Korea, Oregon, California, Arizona, Montana and Texas learned, shared, and played in a confluence of body and spirit. Archery, swords, knives–– everything came off the walls or out of cupboards. We were high with the synergy as we participated in martial arts, hunting, cooking and music—so much singing. And all the pretty ponies. We were like kids at camp, and we started calling it Bow Camp. It changed my life.

Master Kim on Cochise, shooting quabok with an interesting style. According to Anne, "None of us had ever seen anything like it."


I thought I’d be trail riding with Susan and practicing equitation, but I couldn’t resist the synergy or my friends’ encouragement. I had to canter down the course a few times. Then drop the reins. Russ put a bow in my hands and told me to keep the bow up as if shooting. Wow. Suddenly I was part of it, as if dancing with my horse, like I dreamed about.

Back on the ground I got a refresher course in archery. We had compound bows and years before had shot with friends in Santa Cruz. Unlike the sniper precision possible with regular archery, mounted archery is rapid fire. With eyes on the target, the rider nocks, draws and releases in quick succession.

Back at our barn I placed a target in the round pen so Desejo and I could practice. Ride the rhythm. Nock. Draw. Aim. Ride the rhythm. When a horse is cantering, the smoothest moment is just as it is rising, when all four feet are off the ground in that moment of suspension. Breath out. Shoot. Zen.

This is what everyone is talking about. Zen. Riding by the seat of my pants, in unison with Desejo, my upper body engaged in something else entirely; yet connected, fluent, harmonious. I'm a better rider. I'm not over thinking. Nock, aim, release. Nock, aim, release. Thwack. That magic sound when I hit the target. Amazon unleashed.

In February 2012 I attended my first mounted archery clinic and international competition in Seguin, Texas. Reuniting with my Bow Camp friends, I also trained and learned with world champions from Hungary, Germany, Canada and Brazil. Through Facebook I continue to follow my friends as they compete in Jordan, Switzerland, Turkey, Poland, and Korea.

Not bad for her first competition. Anne almost gets a bulls eye.

And serendipity: that a friend sending me to Oregon for a palfrey could launch me on a journey that would change not only my life but also my husband's, in the most empowering and profound ways. Thwack!

About the Author: Anne was born an ardent but unfulfilled horse lover in Oakland, California, until fifty-one years of age when her childhood dream came true––her first horse. Anne and her family live in Santa Cruz, with three cats and three horses. Learn more about writer Anne M. Beggs in her blog and on her website at www.dahlquin.com.

Watch a video of the Al Faris 2012 International Horseback Archery Competition in Jordan.