The breed with an easy-going flat foot walk, smooth "fox" trot and a relaxed, free-flowing canter.

Raina Paucar for Equitrekking: What are the origins of the Missouri Fox Trotter Horse?

Joyce Graening: Developed from horses of early settlers coming to the Missouri Ozarks from neighboring states of Kentucky, Illinois, Tennessee and Arkansas about 150 years ago, the Missouri Fox Trotting Horse is characterized by a gentle demeanor and its signature gait, the fluid, diagonal 4-beat fox trot.

In 1948, a breed association was formed for this talented horse with the purpose of maintaining an accurate stud book for the breed. In 1958, the Missouri Fox Trotting Horse Breed Association, located in Ava, Missouri, was reorganized and reincorporated as a stock company.

In 1973 the corporation was changed from a stock company to a membership organization. The Association kept its registry open for qualifying stock until 1983. After that time, horses approved for registration had to have both parents permanently registered in the MFTHBA, effectively becoming a “closed book” registry.

Equitrekking: How has the Missouri Fox Trotter been used and ridden throughout history?

Joyce Graening: People in the Ozarks depended on their fox trotters for their sure-footedness in this mountainous region and their ability to do whatever was needed around the homestead, ranging from plowing, hauling logs and working cattle, while at the same time being able to double as a stylish buggy horse or comfortable riding horse for the family.

There are many stories about fox trotters working on the farm all week, winning ribbons in the show ring on Saturday night, then pulling the wagon with the family to church on Sunday morning.

Today, the Missouri Fox Trotting Horse is still a useful horse: hunters and forest rangers select them for their endurance and sure-footedness in rugged terrain and ranchers for their versatility, agility, and intelligence to work livestock. The breed is excelling in competitive trail riding and endurance events. The majority of the MFTHBA membership uses them for trail riding, because of their smooth gaits, ability to cover much ground, and the ability to go all day on the trail. One of our mottos calls the fox trotter “America’s Favorite Trail Horse.”

Equitrekking: What are the general conformation characteristics of the Missouri Fox Trotting Horse?

Joyce Graening: The Missouri Fox Trotting Horse generally stands between 14 and 16 hands in height, and averages between 900 and 1200 pounds. The horse should stand well on its feet, be erect, wide awake and alert–with a graceful neck, in proportion to length of body, and joined to the body in a manner pleasing to the eye. The fox trotting horse should have a neat, clean, symmetrically shaped head of medium length; pointed ears that are well shaped; eyes that are large, wide set and bright; and a tapered muzzle with large nostrils.

The overall condition of the horse should be reflected by its demeanor, body weight, muscular definition and tone, hair coat, and the feet. In form to function, good conformation permits the gaits to be performed in the proper manner. Proper conditioning and correct conformation will permit the horse to carry weight for an extended amount of time in comfort to the rider. During movement, the horse should exhibit rhythm throughout his body, from the tip of his nose to the tip of his tail and carry a rooster tail. 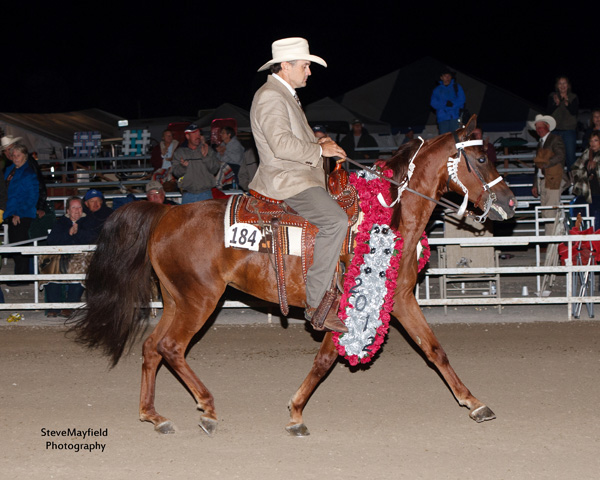 A Foxtrotter under saddle in a show / photo credit: Steve Mayfield Photography

Equitrekking: What are some fun facts people may not know about the Missouri Fox Trotters?

Joyce Graening: Mitt Romney owns a fox trotter. The Romneys bought their first fox trotter several years ago as a way for Anne to continue riding in spite of her multiple sclerosis. In 2002, the Missouri Legislature recognized the Missouri Fox Trotting Horse as the Official State Horse of Missouri.

Fox trotters have been popular on Hollywood movie sets due to their gentle nature and trainability. They were a favorite or Hollywood wrangler Gus Griffin appearing regularly on variety shows like Dean Martin and Carol Burnett. They have also been used as parade horses for politicians throughout the years.

The MFTHBA owns its own show grounds and national registry office located on 130 acres in the heart of the Ozark Mountains in Ava, Missouri. 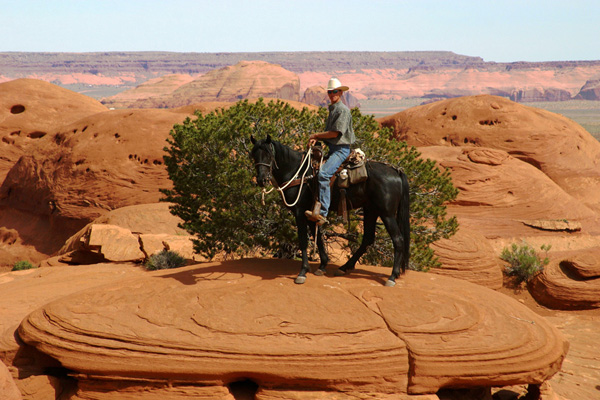 Joyce Graening: Fox Trotters are known for their gentleness, willingness to please, and their extreme intelligence. They have a lot of common sense and can be taught to do many different things.

Joyce Graening: The Missouri Fox Trotter is the ultimate family horse. Their disposition makes them great youth and beginner horses and their smooth gaits make them perfect for older adults or folks with back or structural problems who can no longer ride the jarring pace of many other breeds of horses.

Fox trotters excel as therapy horses for special needs students with physical and mental challenges as well as amputees. Most people ride fox trotters in Western tack and attire, however, they are also ridden in English pleasure, jumping, ranch horse events, and speed events. They are truly the world’s most versatile horse.

Joyce Graening: The breed has stayed true to its original roots, however the fox trotters in the performance show ring tend to have more enhanced strides in their gait and more animation. They all still exhibit the diagonal 4-beat gait and rhythm from head to tail.

A Fox Trotter and his rider working cattle in the field / photo credit: Free Rein Designs

Joyce Graening: Some of the oldest and most frequent names on registration papers include, Missouri Traveler E, Golden Governor, Lady Anne, Zane Grey, Old Fox, Mack K’s Yankee, and many others. Also, because the Missouri Fox Trotter registry was open until 1983, there are many foundation Tennessee Walking Horses found in many pedigrees as well as other breeds.

Equitrekking: What makes the Missouri Fox Trotter unique as a breed?

No special shoeing or training is required for these horses to perform their gaits, and their good dispositions and willing attitudes are among their many desirable characteristics, making them one of the most versatile and loved of horse breeds within the equine registries. Sure-footed in mountainous terrain, gentle in temperament, and smooth of gait for the comfort of both horse and rider, the Missouri Fox Trotting Horse Breed’s motto today is “To Ride One Is To Own One.”