From a stunning state park to the Ford Rouge Factory to Sault Ste Marie, adventures continue on Michigan's Upper Peninsula!

Our first stop on the Pennisula was at the Upper Falls of Tahquamenon Falls State Park. At the visitors entrance stood a totem pole carved from wood. 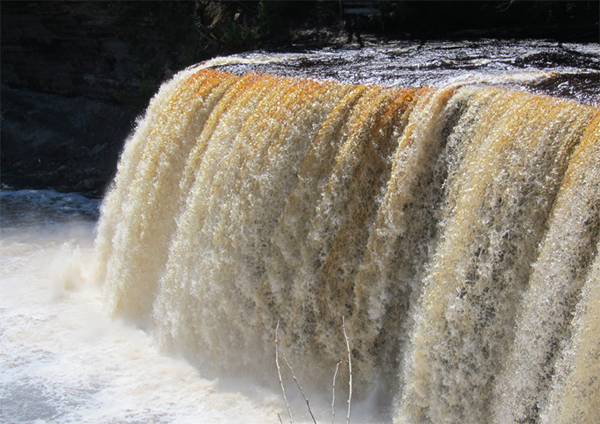 From the visitors entrance, follow the park trail for about 1/3 mile. Tahquamenon Falls has a “rootbeer” color to it due to the tannic acid found in the water. The tannic acid is harmless to the environment. Historically, loggers floated their timber down this river. In recent years, there have been recordings of cougar sightings. One such cougar had a collar which indicated it had traveled to the Upper Pennisula area all the way from Idaho. 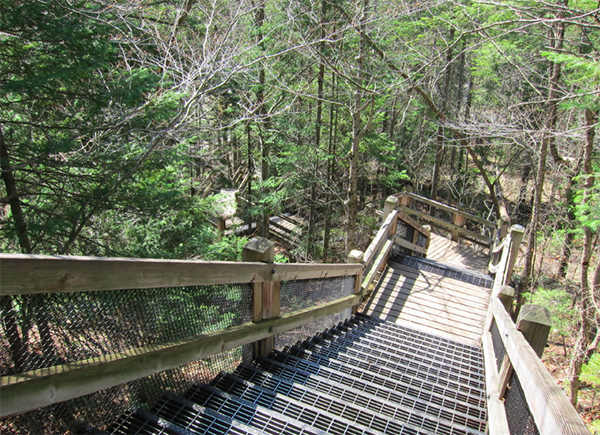 You can get a closer look of the Upper Falls by way of 94 steps leading down to the falls.

Continuing on our exploration of the Upper Pennisula, we headed to Sault Ste Marie, Michigan's first city established in 1668, named after the Virgin Mary. Here we witnessed the great “Soo Locks” at work. More than 11,000 ships carrying cargo pass through these locks every year. The locks were engineered to compensate for a 21 foot drop in water levels between Lake Superior and Lake Huron. The locks are operated and maintened by the Army Corps of Engineers. 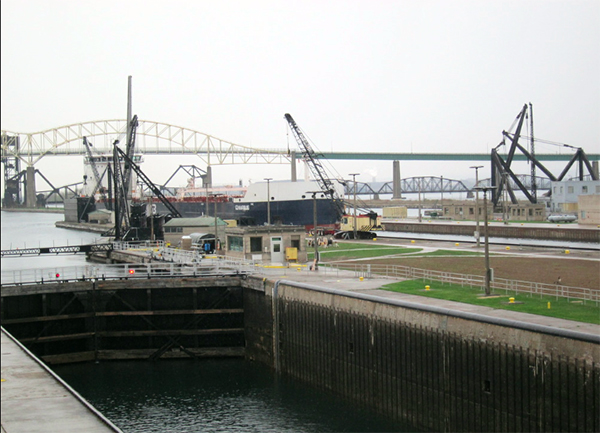 Another place to learn about shipping history in the Great Lakes area is at Museum Ship Valley Camp. 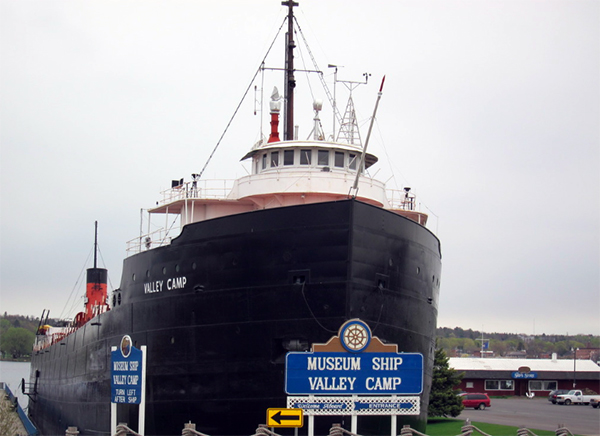 The museum, located inside the ship, has on display one of the two damaged lifeboats retrieved from the famed Edmund Fitzgerald shipwreck, which occurred in November 1975. The lifeboats were the largest pieces of the wreckage recovered. Aquariums located inside the ship's museum containing fish species of the Grand Lakes region were found here as well. The majority of the fish species are cold water fish such as trout. 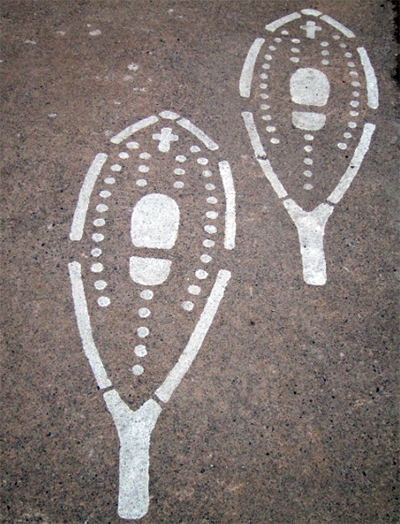 Exploring the streets of downtown Sault Ste Marie proves not difficult to get lost as all you need to do is follow the snowshoe prints painted on the sidewalks! Plenty of shipfaring and nautical gifts are to be found in the gift shops lining the main street nearest the Soo Locks area. A tulip garden shaped like an anchor is found along this stretch as well. 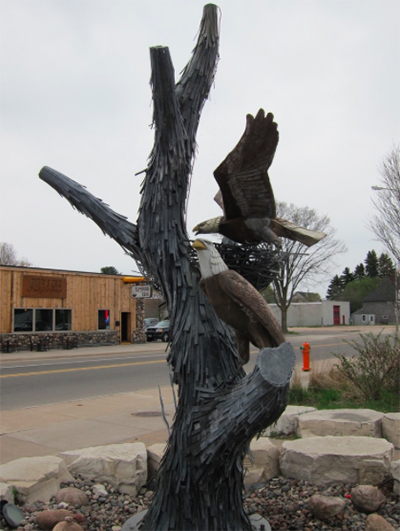 Another interesting sight found along the pedastrian walk was a pair of eagles and their nest carved and created from wood. St. Mary's Cathedral Church, built in 1881 in a Gothic revival style is now a Michigan Historic Site. 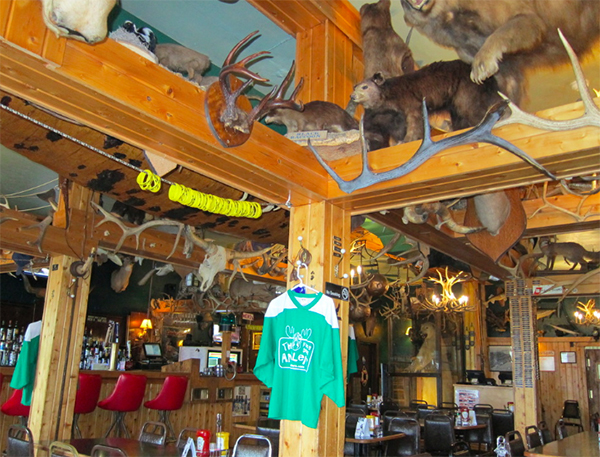 An interesting restaurant, “The Antlers”, is a fascinating place to stop in and eat good home-made fare. Inside the restaurant, it lives up to its namesake. Wildlife tropies and antlers on display filled the walls and ceilings of the restaurant. The bar area was used in filming several episodes of “Gunsmoke”, a popular western series TV show which aired from 1955 to 1975. 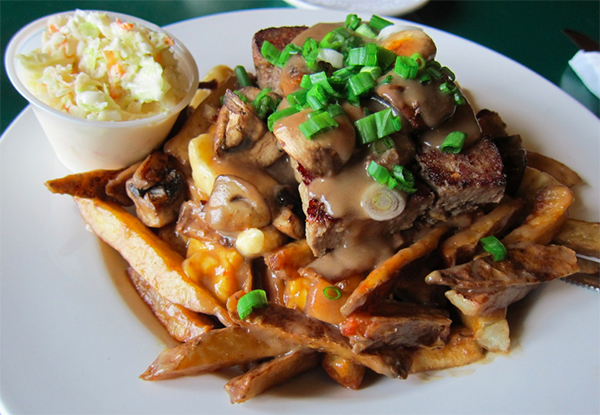 The special of the day was “smelt”, a small cold, freshwater fish found in abundance during the spring as it makes it way upstream to breed. “Smelt” fish is also found in Northern Maine as well and similar to Ocean Smelt. Being a native of Northern Maine, my husband instantly ordered a plateful of smelt. As for myself, a native of Northern Maine as well and of French ancestry, I had to order the venison meatloaf and “poutines”. Poutines is a cultural French Canadian food consisting of hearty gravy with cheese curds poured over french fries.

Sault Ste Marie is the most eastern city located on the Upper Pennisula. An international bridge, traversing and separating Lake Huron and Lake Superior, connects it to its sister city in Canada, named Sault Ste Marie as well. Back on the Upper Pennisula, heading west along the Lake Superior coast from Sault Ste Marie, is the Point Iroquois Lighthouse. This lighthouse was important to assist freighters safely between the open waters of Whitefish Bay and the St. Mary's River. 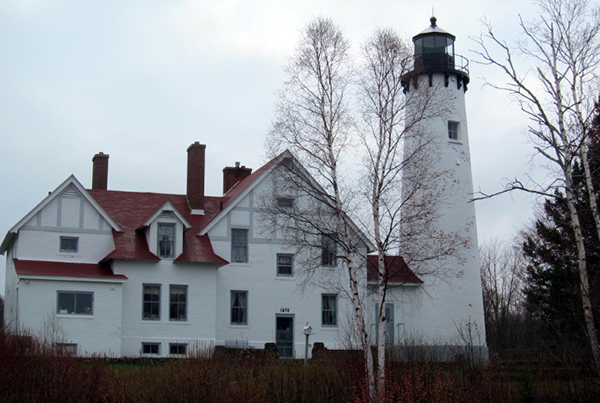 Walking along the Lake Superior shoreline at Point Iroquois Lighthouse grounds, it is amazing to see the abundance of smooth round and colorful rocks of all sizes. The color of the rocks appeared brighter in the water, as they were wet. Instead of the typical seashell hunting on the beach, we ended up rock hunting and picked some colorful smooth rocks as souvenirs. 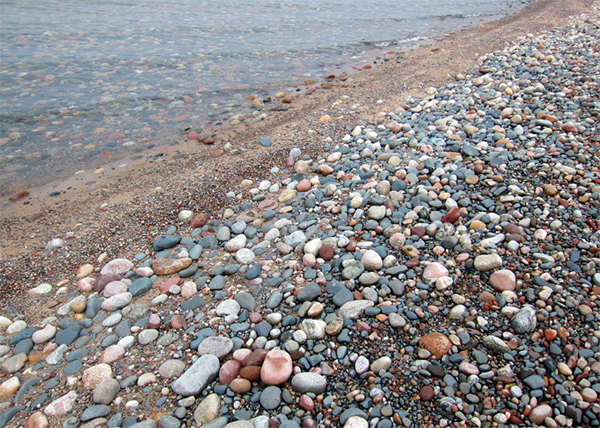 Next, we traveled to Newberry, Upper Pennisula, MI to the Logging Museum. This 14 foot section of White Pine tree indicating by its growth rings an age of 295 years old. 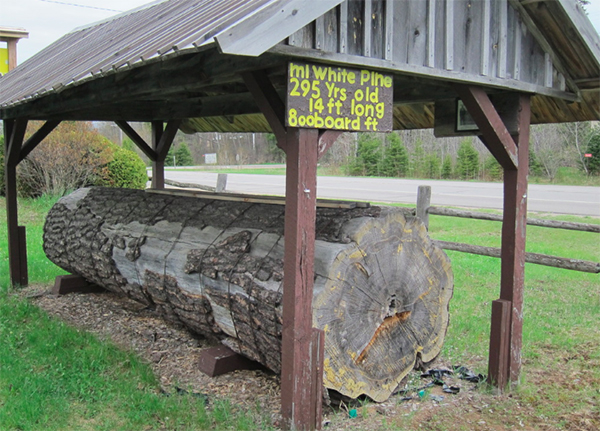 An old bell from a train which transported logs to the wood mills. Newberry is the Moose Capital of Michigan, albeit we did not see any moose while on the Upper Pennisula, except for a statue of one at the Oswald Bear Ranch. 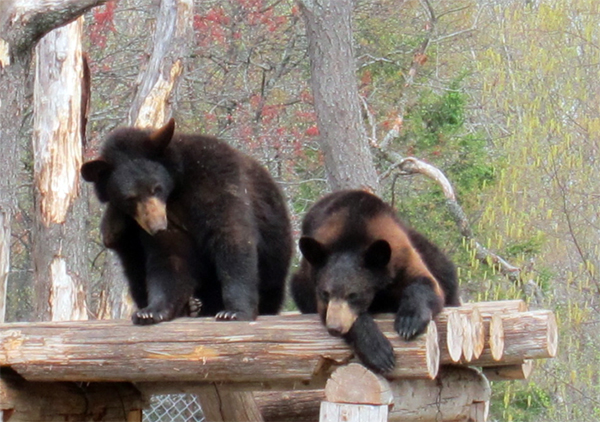 The Oswald Bear Ranch is a rescue refuge for black bears. Family operated, it has been raising bears since 1984 and opened to the public in 1997. Due to its federal oversight, it must keep the male bears separated from the females as it is restricted from any breeding of bears. The bears that are brought here are kept for the duration of their lifespan and are not released back into the wild. The ranch provides a large natural habitat in a wooded area. Guests can walk around the perimeter of the fenced environments via walking trails. There are a couple of raised staged viewing areas to see the bears from above. During the winter, the bears do hibernate underground during the cold northern Michigan winters, so little effort is needed for care and maintenance from the ranch employees. A few cinnamon colored bears are seen as well.

A litter of three very young bear cubs were brought in recently from Ohio whose mother had accidently died. Two of the cubs appeared healthy upon arrival, with the third cub being the runt of the litter. The two healthy looking cubs died unexpectedly, while the runt continues to live and thrive. Unfortunately he currently appears to have limited vision, and if not outgrown, will need special care for the duration of his life at the ranch. We were fortunate to have the opportunity to be able to hold this special cub, and it was one of the highlights of our trip to Michigan for my husband as seen by the expression on his face.

Leaving the Upper Pennisula, heading back south on the eastern side of Michigan, we stopped in Frankenmuth, MI to visit Bonner's Christmas World, where it is Christmas year-round. Each night Bronner's ½ mile Christmas Lane is lit up with thousands of lights. In this large Christmas themed shopping extravaganzaa, you can find beautiful ornaments of every shape, size, color and theme you can ever imagine as well as all the other tree trimmings.

The final stop on our trip was in Dearborn, MI. Being a diehard Ford truck fan, we couldn't resist touring the Ford Rouge Factory where the Ford F150 pickup trucks are manufactured. It is a very impressive sight to learn and witness the robotics utilized in the assembly lines as well as the latest technology in automobile manufacturing. Also interesting was the history behind its founder, Henry Ford. In addition to the Ford Rouge Factory, there are two other sections of the Ford facilities for tourists – the Ford Car Museum and the Ford Village which replicates an earlier era when automobiles came into existence. Tourists can get guided tours thru the village in a Model T automobile replica and pays tribute to the Industrial Revolution.