A passionate trail rider who volunteers with the Mammoth chapter of the Backcountry Horsemen describes a trail riding experience we all might hope to enjoy in Kentucky's Cave Country.

How does one begin to tell tales of a trail when living adjacent to it most of their life? Mammoth Cave National Park, the longest cave system in the world that’s home to more than 400 miles of explored cave and the second oldest tourist attraction in the U.S., has been my backyard for half a century and for that reason, it seems to be a hard trail to discuss. So many memories and perspectives come to mind when trying to put my words on paper. How to describe a trail that has become second nature to travel? There is nothing ordinary about this area of south central Kentucky—whether riding one time or a hundred, there is never a time to call these just your average trail rides. 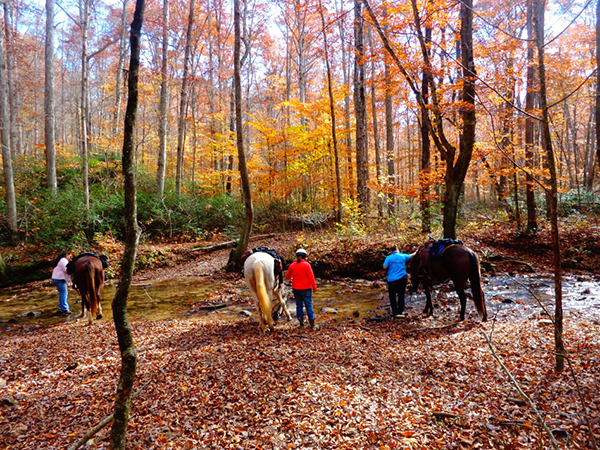 Going back in time now and growing up next to Mammoth Cave National Park, I shared many happy treks as a child, especially camping at the park and boating on the beautiful Green River with my family. One of my favorite things was gazing up the sheer cliff walls of the river and wondering what it would be like on a trail up there, looking down on the river below. After starting a family of my own, we hiked many of those upward paths that are now horse trails. My love for horses grew stronger with every ride, and I became immersed in discovering more about trail upkeep and maintenance, so I started volunteering at Mammoth Cave National Park.

Now much of my trail time is spent volunteering with the Mammoth chapter of the Backcountry Horsemen, serving as a voice for riders and an aid to the national park. Horseback riders like us are often the first to access a downed tree or litter, and we’ve quickly become a second line of defense in the continual work of keeping trails fit for users. We call these trails home and want them to feel the same love and care as we do for our horses. 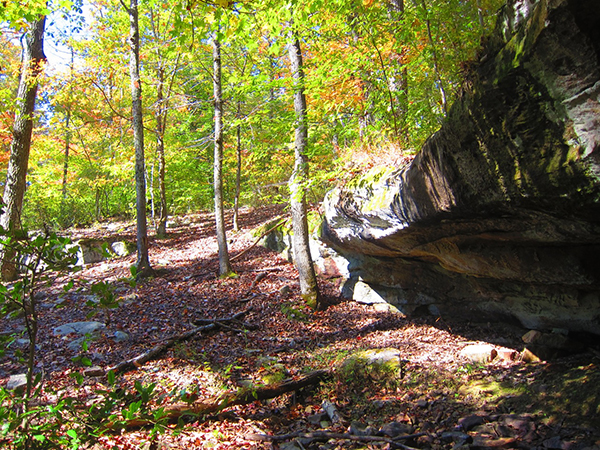 Riders become immersed in these quintessential southern Kentucky landscapes and geologic wonders. Mammoth Cave National Park contains about 60 miles of horseback trails, all offering a wide range of conditions for riders. Riders have the ease of wide avenues and gravel surfaces on several beginner trails. But for those with more adventurous spirits, the Green River trails offer sheer cliffs, narrow rocky ledges, muddy seasonal trails and creek bottoms. Riders become parts of the landscape of green, take a look within caves, rockscapes, virgin timber, karst sinkholes, farmsteads and settler cemeteries, all intertwined with the tributaries of the Nolin and Green rivers. Trails are open year round, with several horse camp options adjoining the national park. 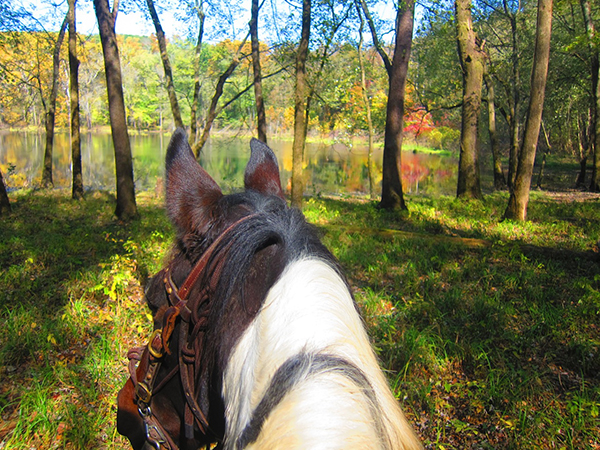 A change in season offers a new view. Winter’s stark landscape means a lack of tree foliage and dramatic views of the nearby karst, sinkholes, caves and rock shelters. Springtime dawns with a bountiful wildflower show with wild orchids and pristine flora. Summer and autumn are the busiest seasons of the year for horseback riders and feature abundant views of area wildlife like wild turkey, deer, the occasional coyote, rattlesnakes and copperheads.

One of my favorite trails is First Creek Lake Trail, a 12-mile round trip. The trail begins with a descent into the forest via a trail that was once an old settler roadbed that followed the original ancient buffalo trails. Many modern Kentucky highways were once these old buffalo traces. Here, those deep, wide tracks formed many of the early settler roadways that existed near Green and Nolin River watershed in central Kentucky. Looking closely, you can still catch a glimpse some of the buffalo trails in the river bottoms as deep traces in the forest lead toward the river, still wide enough for the original covered wagon trails. These historical routes were once avenues for the abundant wildlife to find drinking water in the nearby rivers. These trails often lead to daydreaming for this history-loving trail rider. 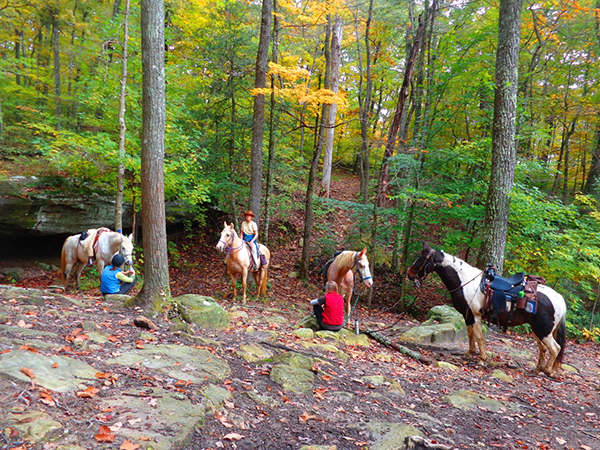 Many of the Mammoth Cave system’s trails include remnant sounds of early Kentucky settlers, and rider views include old farmsteads, which, after more than 80 years of national park occupation, all but echo the presence of human habitation. A sharp eye will pick out old foundation stones where a home once stood, a lonely settler graveyard, perhaps a rusty wagon wheel or a piece of a horse-drawn farm implement in the distance. Look close and pick out extra large rows of ancient trees that would serve as a property line or fencerow for the early settlers. Signs of a once thriving community of farmers and traders are now long forgotten.

First Creek Trail becomes more rugged now, winding down past rock overhangs that were once Native American shelters. Trail surface now becomes hardscrabble with sizeable sandstone rocks and loose under footing making travel on horseback more of a challenge. After a rider navigates through the rocky ledge, the travel heads uphill and footing becomes cliffside with dramatic views of nearby Sugarcamp Hollow.

First Creek and Second Creek Hollow are beautiful reminders of the magnificent wilderness that all of Kentucky once was. After crossing a stretch of solid sandstone under footing at bluffside, once again the trail descends into valleys rich with large growth forest and softer footing. First Creek Trail is now merging into Second Creek, where the small stream of water once again comes into view and riders tend to slow their pace. Tie posts are trailside as Second Creek runs directly into Nolin River, the perfect spot to stop and stretch your legs with a view of the river below. 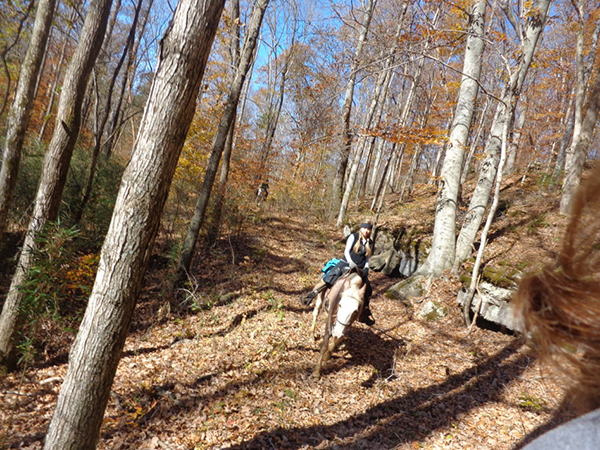 Hop back up and keep riding the descending trail further into the flat riverbottom, catching a glimpse of old hearthstones, the waterfall and small streams with fields overgrown with native bamboo and large maples, beeches and sycamores. The riverbottom has a fresh mile trail loop offering various trail surfaces depending on the season, from muddy to swift water crossings in wet spring to dry stream crossings autumn. There are two campsites on the loop with horse tie posts, and they are full of so many riders in the peak seasons that you’ll need a reservation to stop. Midway around the loop, there are other trail crossings, leading riders to options like the Temple Hill Trailhead, the McCoy Hollow Trail and Wet Prong Loop. Some of these trails make for six to eight hours of more riding and aren’t for the feint of heart. For those wanting more of an easy trail ride, stay on the loop and return to First Creek Trail to circle back from where you came.

The peaceful wilderness landscapes and the bountiful trail rides are calling your name at Mammoth Cave National Park in south central Kentucky. Once they call, it’s impossible not to answer. If I’ve learned one thing in over the 50 years I’ve dedicated to this national park, it’s to always give in to the beckoning beauty of the trails.