Awaking during our first day on safari in Botswana, I found that it’s really hard to get out of bed in the crisp morning air and definitely not shower weather. When cozied in a warm bed, you have to craft a careful escape route. Mine involved reaching as far as I could for my fleece jacket and putting that on while my bottom half stayed under the covers and then grabbing socks, and my riding pants, which I stuck under the covers for a few minutes before swiftly lifting the covers and getting dressed as fast as possible.

If you are traveling to ride in Botswana during the winter (May to October) bring layers for sure and maybe even some gloves and a warm hat. I have my riding gloves, but could have used some winter gloves on colder mornings. Luckily, hot tea awaited at breakfast and then the warm body of my horse. 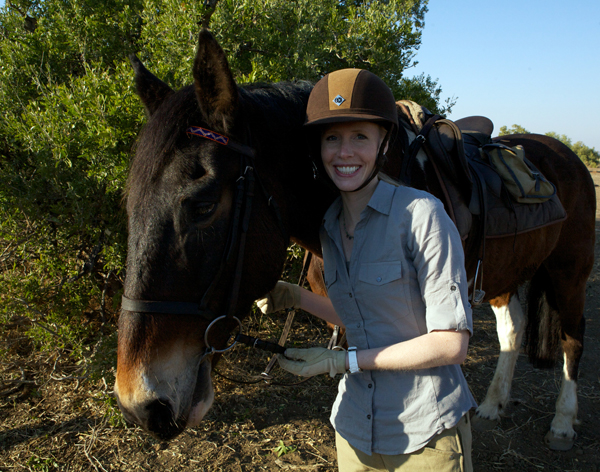 Equitrekking host Darley Newman with her trusty steed in the Tuli Region of Botswana for her Limpopo Valley Horse Safari.

My horse ride today would be our first day of filming with horses, and I hoped Cor, who runs Limpopo Valley Horse Safaris on the Mashatu Game Reserve, had paired me with a nice, patient horse. He did. We started our ride through an area with rocky outcroppings. The Northern Tuli Game Reserve, which includes the Mashatu Game Reserve in eastern Botswana, is one of the largest privately owned game reserves in Southern Africa. This area is called “Land of the Giants" by many because of its larger than life natural attractions. The riverine woodland and marsh landscapes are traversed by large herds of elephant and dotted with huge baobab trees. The baobab, beautiful trees whose branches are thought by many to look like a series of underground roots, has been called “the upside down tree” in local legends. 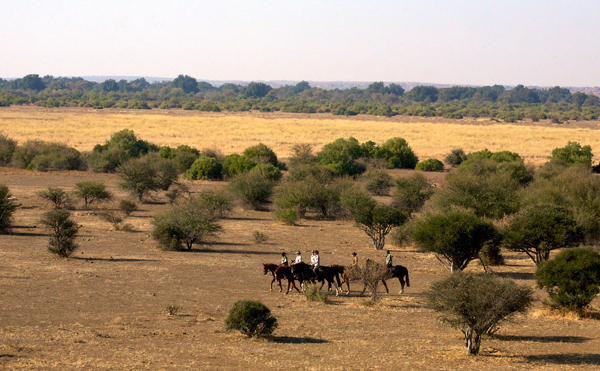 There are vast open areas for riding in the Tuli Block of Botswana, making it a great place to pick up the pace on horseback.

The Mashatu Game Reserve, where Limpopo Valley Horse Safaris operates, is home to diverse wildlife as well, including elephant, kudu, waterbuck, steenbok, warthog, and the cats -- lion, leopard, cheetah and hyena. I thought that I knew the animal kingdom well, but would find myself saying, what animal is that, as we encountered more and more diverse animals on our trek. It’s an amazing learning experience just to explore here.

As we rode by a variety of local plants and foliage, Cor and his team spotted a herd of zebra in the distance and we stealthily rode towards them. The hard part about what we’re doing in Botswana is that we are not only taking a horse safari, but also filming it. Not only do we need to wear safari colors to blend in with the environment, but our team is working to capture the essence of a horse safari, where being on horseback allows you to get up close to animals – closer in many instances than you’d be able to on foot or in a noisy vehicle. Our film crew, however, is traveling in a vehicle and many times, for safety reasons, can’t get out and walk around. We don’t want them to be eaten! This makes filming challenging. 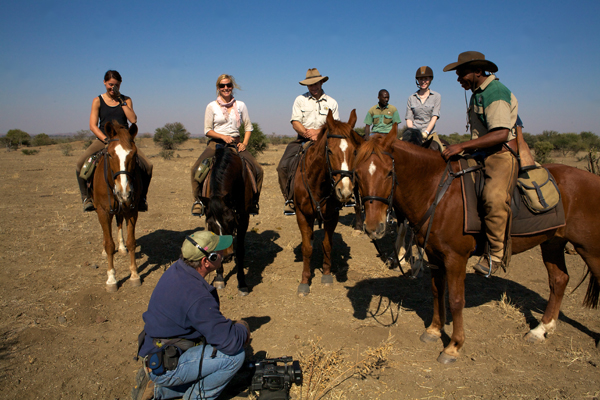 Equitrekking Director of Photography Greg Barna introduces riders to his camera, which is sometimes low on the ground with Greg in the crouching position.

On each shoot, we work to introduce the horses to our film equipment, so that they do not perceive Greg and Chip with their cameras as predators. Often, we ride close to the camera or Greg gets down low to get a shot of our hooves kicking up dirt.

After our horses were used to the film crew, we approached the herd of about fifteen zebra and wildebeast and Cor described the herd dynamics. 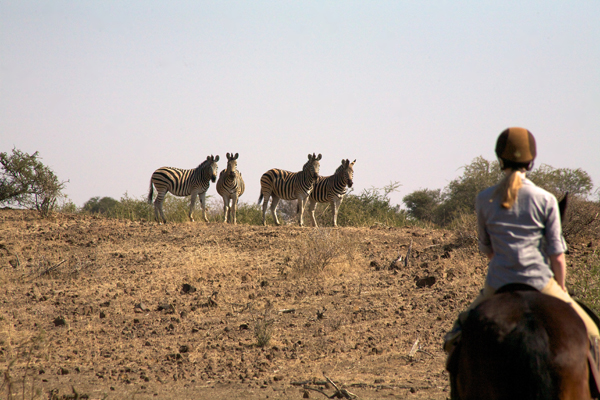 Equitrekking host Darley Newman gets up close to a herd of zebra in a sort of a stand off in Botswana's Tuli. You can only get so close before the zebra scatter and both Darley and the zebra herd decide that this distance is just right.

We were situated with the film crew in their vehicle, us on horseback in the distance and then further out the zebras. It was amazing to be so close to this wild herd. I’d been excited to come to Botwsana to film and explore, but also a little nervous. It was a real rush to be standing and observing the animals from this position on my horse. 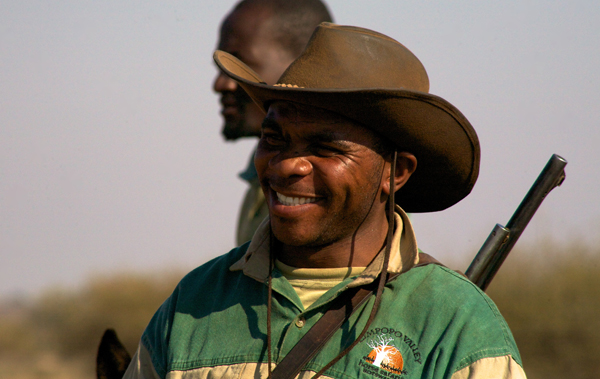 David, a Limpopo riding guide, is from the nearby village of Motlhabaneng, which you may have the chance to tour if you ride with Limpopo, a special experience.

As we continued onwards, David, another riding guide and native of Botswana, called out to us to stop. We were riding through a sandy patch by a rocky outcrop. He jumped off his horse and picked up a tool from the ground that he thought may date back to the Iron Age. 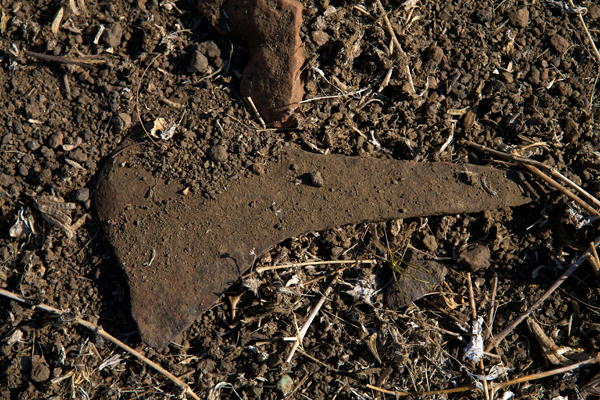 Finding artifacts like this is not uncommon, as the Tuli region has been inhabited for thousands of years.

Also on our ride, we were able to do some fast and sustained canters. Honestly, it was one the longest canters I’ve ever done. Cor says they can do even longer ones. The terrain is flat and mostly compact dirt footing loosely dotted with shrubs and small trees. We wound through this on horseback. I followed behind Cor, my legs starting to feel the burn after the first morning’s ride. 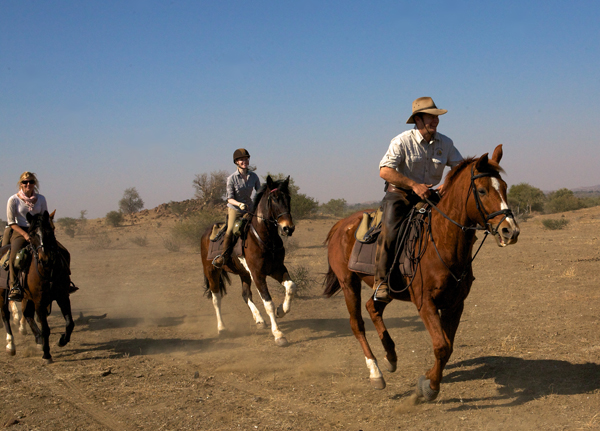 Cor leads Darley and the riding group on the kind of canter you'd see in a Hollywood Western. Giddy-up!

At home, I ride once or twice a week, but also mix in running, biking and other sporty activities. Nothing compares to riding though, and prior to the trip I was worried that I wouldn’t be able to handle spending six to eight hours in the saddle each day, as this is what we do many days of filming. I sort of have to try to match the fitness of a riding guide. I can tell you that I was sore the first few days, but after that got used to it.

Riding back to the stables, we passed through a vast open area of tall grass, perfect for a lion or big cat to hide and await prey. We also did a long canter through an area of open dirt and shrubs that tested my two-point position. We passed herds of impala and saw a giraffe. That was all just in the morning ride. 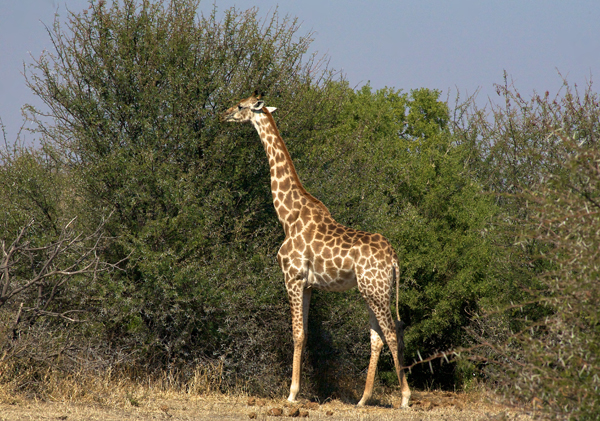 A giraffe tries a mid-morning snack. In Southern Africa, giraffes often feed on all acacia shrubs and trees.

Midday gets warm and really sunny, even in winter. It’s also quite dry here, so while a family of baboons hung out by the stables, we gave our horses a bath and cooled off ourselves with some much deserved lunch. It was a nice first ride and introduction to the diversity of Tuli.

Learn more about taking this horse safari in Botswana and ask us about the riding vacation best fit for you and your group of riders and non-riders. We've taken them all so are happy to help! Learn more about travel to Botswana from Botswana Tourism.