Yesterday I read the articles below that Juliette Ober wrote for Equitrekking, Bit to Bitless Journey, A Return to Riding After 40 and Keeping My Horses Sound, Sane and Injury Free.

I identified with her statement...

"Without exception, I notice that the adult riders who have the most success and safe rides are the ones who are slow and quiet at haltering, leading, grooming, and tacking up. Often these are adults who did not ride as children or ones who spent years away from horses. They are the riders who are awe-struck that they are working with a horse. They do not take anything about riding for granted - including the time in the stall. They are meticulous and gentle and grateful. They linger." 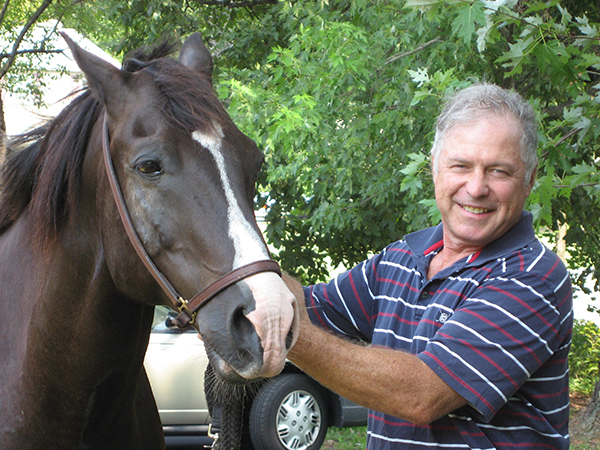 The proud new owner of a horse and first horse owner in my family. Taken at Tyler Park Stables. (article author Bill Earl)


My Story of Getting into Horses

I started riding at age 58, seven years ago.

I started to notice a sign on a billboard at the end of the Danhower Bridge in Norristown, Pennsylvania. It read: "Horse Riding Lessons at Our Farm". I kept looking at that sign. I had been on a trail ride once, some 40 years prior, had always an interest in horses, so I thought, why not! Horseback riding is something that I always wanted to do.

I took three lessons at Our Farm, 19 more lessons at Three Diamond Stables, in Collegeville and, as crazy as it seemed, before the end of two months of lessons had bought a quarter horse at Tyler Park Stables (right next to Tyler State Park ) some 30 miles away. I bought that horse, (his name was Keiko) because one of the boarders had seriously thought of buying him, and it seemed like the boarders (about 25 in all) were friendly and would help me get started, which they did.

Keiko was being used on the hack line as a lead horse and also was billed as the "horse we use for little kids.” Being new to riding and new to owning a horse, this is exactly what I needed. He was about 12 years old and Frank, the owner of the stables, had bought him at the New Holland auction. Not much was known about him. 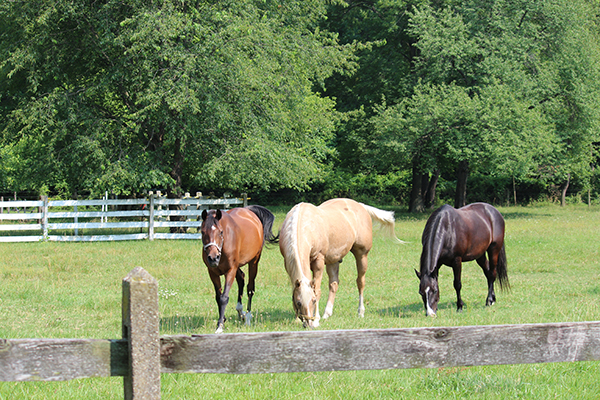 Keiko turned out to be the mentor I needed to teach me about the ways of the horse. We were the perfect match. Several times on the ride away from the barn and into Tyler Park, if I had the saddle adjusted incorrectly, Keiko would turn his head around and tap me on the foot with his nose, as if saying, "look, find out what is bothering me and fix the problem"–– which I did. He was very intelligent.

I rode every weekend. My skills increased rapidly and I found that Keiko would jog and lope, but not gallop. Then one day as I was getting Keiko ready for a trail ride, I noticed how sad he looked as I was putting the bit in his mouth. On one occasion, he actually tossed his head and threw the bit and bridle off into the air. I didn't discipline him. I just stood there looking at him trying to figure out what he was trying to tell me.

It was obvious, he just didn't want that piece of metal in his mouth. I thought: Maybe the bit, coupled with my beginner skills with the reigns was holding him back from a gallop. I was right. I fitted Keiko with a Dr. Cook's Bitless and it was like he had a new lease on life–– moving easily from the lope to the gallop.

And what a gallop he had. Keiko turned out to be one of the fastest horses at the barn. 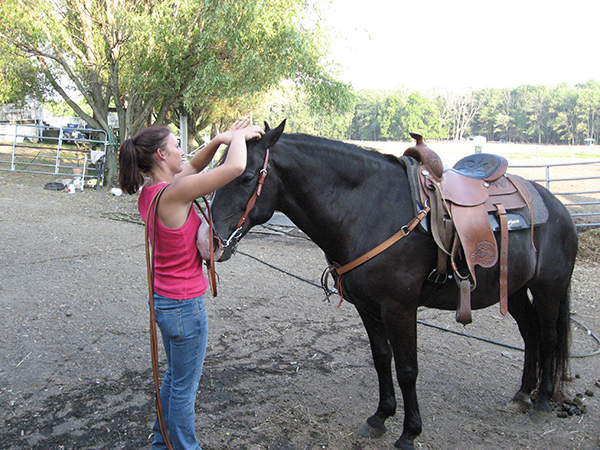 The barn owner's daughter, Briele, showing how to tack up Kieko. (A lot of equipment !? I sold the saddle, bit and bridle 6 months later... used a Dr.Cook's Bitless and a Best Friend Pad for about 5 years, then switched to a Comfort Plus pad. (Neither pad had stirrups.)

One time as I was trying out a new bareback pad, because the girth was made of fleece, the entire pad started to rotate. The trail was rocky and I was sure that in the next second I was going to hit the ground and an injury was a certainty. In the next instant, with unimaginable speed, Keiko dove under me and stopped my fall. I was absolutely stunned and immensely grateful. I gave him every treat I had in my pocket and walked beside him back to the barn. I told the gals at the barn what had happened. Their first comment: "My horse would have just left me fall and then run back to the barn".

I always took good care of Keiko, but this past Easter, he was mistakenly turned out into a muddy field, pulled a stifle and had to be put down. It was traumatic.

I wanted to write this as a tribute and to thank Juliette Ober for writing those articles. I have forwarded them to some riders I know are still stuck on using bits and saddles. I now borrow and ride other horses, occasionally.