Longtime guest Cindy Coe tests her skills as a wranglerette, leading three girlfriends on a trail ride out from T Cross Ranch up to Hole in the Wall in Wyoming.

At supper one evening, Mark told four of us gals that we could head out on our own the next morning. We had all been coming to the T Cross Ranch in Dubois, Wyoming for a while; some for years and years, but it was still exciting to think we’d be turned loose to go adventuring on our own! I saw the opportunity to practice my wranglerette skills and my compadres were more than game to let me give leading a trail ride all by myself a whirl! 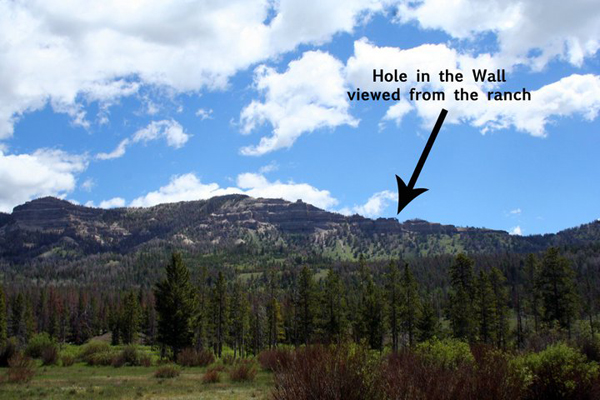 Many guests are surprised that the ride to Hole in the Wall and back can be made is three hours. Can I get them up there and back?

The next morning we got down to the corral early and debated which trail to take. We sorted out that nobody else was heading up to Hole in the Wall and decided that would make for a good test of my skills. Conner told me what time I needed to get back by before they would send out a search partboy would that be embarrassing! The gals debated how to get to Hole in the Wall, but I felt pretty sure I knew the way and confirmed with Conner and Michael just to be certain.

We got underway, heading across Horse Creek and the west meadow to the gate. I had to get off of Idaho to open it, but pointed out that I needed to check cinches anyway. My companions on this trail ride had decided they would score me on a variety of different factors ranging from horsemanship, such as opening gates to picking good bathroom stops! (As if I needed this extra pressure.)

It wasn’t too long before they began concocting issues to test my wranglerette abilities. “Cindy, I need to drop my stirrup because my knee hurts.” “How much further is it?” “What kind of tree is that?” “What’s the name of that yellow flower?” “What mountain range is that called?” 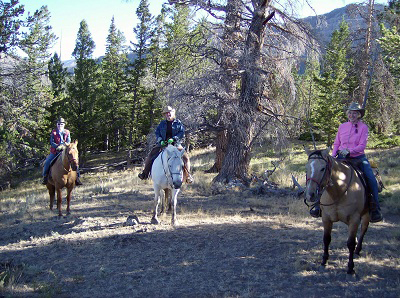 Being a good wranglerette means answering any and all questions politely and patiently. Also, maybe because I am a girl, I periodically asked whether anybody needed a pink tree break. I pointed out finally, that we would be leaving the cover of trees shortly, and recommended we stop for a pink tree moment. We all took advantage in turn and I tried to be helpful in getting everybody remounted. Then, one of the gals pointed out that a good wranglerette would’ve ensured that there was a good view for all to observe while taking advantage of the pink trees. The spot I’d selected did not offer any views. I was more interested in good cover frankly; that, and a lack of moose, grizzly, and any other wildlife that might take offense.

One of the gals regaled us with a tale from several years past when riding on a cold day, she found that her fingers were so stiff and frozen that she was unable to pull her pants back up after a pink tree stop. Good grief! What happened we all asked? She told us that the dutiful wrangler came to her aide. Now, that’s something to think about; what else might a wranglerette be called upon to do in the line of duty? 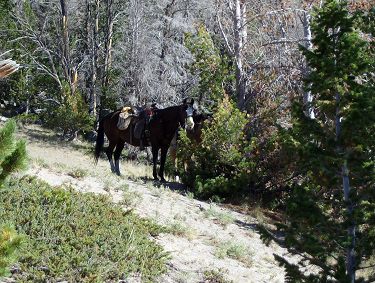 Even Idaho was amazed I got us this far!

We made it up to Hole in the Wall safe and sound and there was an amazing lack of wind when we arrived. It was gorgeous. I helped those that needed it in getting off of their horse and making sure the horses were tied securely while we enjoyed the views and took the mandatory photos to document our safe arrival! I was able to answer all of the questions regarding the mountains in view, except that I had forgotten the name of the glacier at the base of Mount Gannett. (It’s Grasshopper) Eventually the wind picked up to its normal and expected pace, and I deemed it time to get back on the trail so that we would arrive back at the corral in a timely fashion.

I made sure everybody got safely mounted and we headed back down. My dear companions continued with their “bad-dude” act; I believe they could purposely drive the most even tempered wrangler over the edge. We arrived at the gate and I was determined to open it without getting off of Idaho so as to earn a few bonus points toward my overall wranglerette ranking. No such luck. Idaho only knew how to go through the open gate, or back up as fast as possible in protest at doing anything else. I finally had to get off and open the gate. Then my companions informed me that I was going to get demerits…they were taking points away!! And here I thought I was just going for a bonus. Sigh.

As we climbed the mountain, I made sure to stop periodically to allow the horses to catch their breath. A good wrangler is always conscious of the needs of the horses and is responsible for their care as well as that of the dudes. I would check everybody over visually to make sure the saddle was in the right place, that all straps and what not were fastened, and that the riders were doing okay. Being a wranglerette is a big responsibility, and I really didn’t want to blow this opportunity given to me to lead a ride! 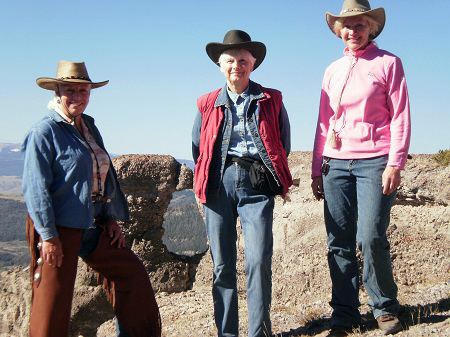 Photographic evidence of our safe arrival at Hole in the Wall! Great ride, great friends!!

Back at the corral, I helped get the horses situated for their lunch break. I think Conner was slightly surprised that we did make it back on time and in one piece. The gals regaled him with their assessment of my performance. This was repeated again at dinner that night to Mark. I think he was most amused at the criteria by which I was being rated. Perhaps he thought dudes were less astute than to know that wranglers often BS their way around dude’s questions. And he simply could not believe a wrangler had to pull a dude’s pants up! I think he was wondering what he himself would do in such a situation.

When all was said and done, I was pretty proud of myself and Idaho for the job we did. I became even more determined to teach Idaho how to help me open gates, and I just hope I never have to help anybody get their britches back up. Can I hear an amen Sister? 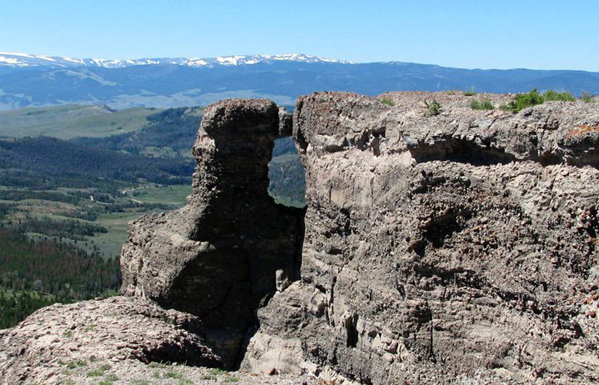 A half-day trail ride to Hole in the Wall rewards guests with a breathtaking view framed through a natural stone arch.

How you can go: T Cross Ranch is located outside the Western town of Dubois, a two-hour drive from either Jackson Hole or Riverton. Learn more about visiting T Cross Ranch on their website. Check out T Cross in the Equitrekking Vacation Guide and learn why T Cross is a Top 20 Ranch pick.

About the Author: Cindy is a NDY (Not Dead Yet) native of Western Colorado. She is a regular at the T Cross where she undergoes an annual on-the-job interview to become a wrangler-ette during her retirement! For now she resides in Cody, Wyoming with her 2 dogs, 4 cats and 3 horses.