Bridgeport Valley lies below the slope of the highway like a green carpet, a contrast against the dun-colored rock hills and sagebrush. Hunewill Ranch, a cluster of white buildings, is barely visible on the valley floor. Beyond the valley, the mountains rise sharply, reminiscent of the Tetons.

We had arrived for a 5-day stay at Hunewill Ranch, one of the oldest family owned ranches in California, founded in 1880. I had ridden at a Montana guest ranch several years ago and was looking for a similar experience in California. An internet search turned up Hunewill, located about an hour north of the resort town of Mammoth Lakes along the north/ south thoroughfare of Interstate Highway 395. 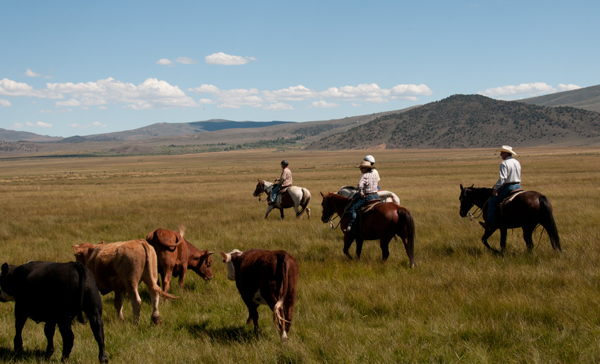 After a dinner of roast beef, a brief orientation on horse basics and safety tips was held in the barn, concluded by dessert. On the whiteboard, horses are matched to guests’ names. It’s good to remember your horse’s name since the wranglers call out their name, not your own, as the horses are saddled up. Elmo was mine for the week. 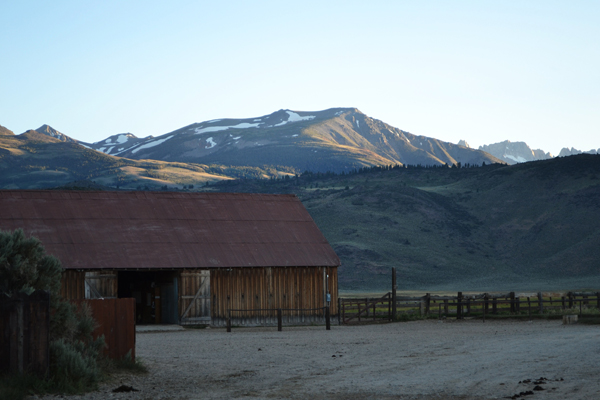 Riding out from the guest ranch 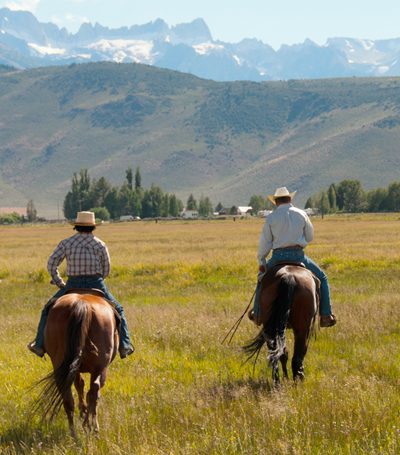 Heading back to ranch after cow herding at Hunewill. Photo credit: Dwayne Leonard


After a breakfast of eggs Benedict and potatoes, it was saddle-up time. Elmo’s name was called out, and I approached a 15’ish hand sorrel gelding with a blaze. While the rest of the group waited for their mounts, Elmo and I got acquainted by walking small circles. He responded easily to leg and neck rein cues, including the brakes. He was always mindful of surroundings, looking around, but was never spooked.

This could work, I thought. The first day was limited to walking and trotting only, ensuring all riders felt comfortable with their horses, but this was not nose-to-tail riding. Separated into groups by riding ability, we rode across open fields and crossed streams that lingered even in late August due to the heavy snow from the previous winter.

Stan and Jan Hunewill manage the ranch along with their grown children, Betsy, Jeff and Megan. The ranch was founded by Napoleon Bonaparte Hunewill, who came to California from Maine, lured by gold prospecting. The lumber business proved to be more successful. He established his first lumber mill in the redwood forests south of San Francisco, and another in the eastern Sierra Nevada Mountains. The gold and silver mining town of Bodie, located 15 miles east of the ranch, was mostly constructed with lumber from the sawmill operation. 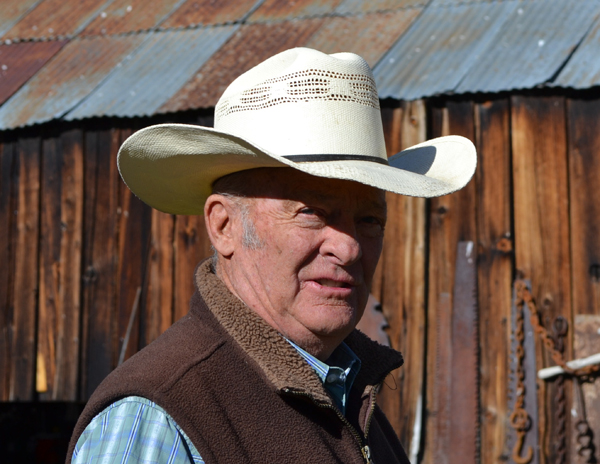 I eased my middle-aged body out of bed. After several cups of coffee, breakfast and a dose of ibuprofen, the aches dissipated. Megan promised we would all be loping today. We split up into our groups and rode out. Even within the intermediate group, there were varying levels of riding ability and experience. I can handle a horse (I rode hunter/jumpers for over 12 years), though it had been a couple years since doing any regular riding. I touched Elmo lightly and clucked. He responded in kind, and we were flying. I squeezed the reins as we came up to the rest of the group and he slowed to a walk. I couldn’t have asked for a better horse.

There’s more than riding at the ranch. The Hunewill family also makes sure the evening activities are just as fun. There was square dancing, which, at 6500 feet, can be a cardiovascular workout. There was also talent night with participation from a few guests, including a little girl who sang a Beatles tune. The Hunewill family is not shy about displaying their talents as well. Younger daughter Betsy performed a tap dance duet with her mother, which was absolutely delightful. Another daughter, Megan, sang a ballad about a cowboy. 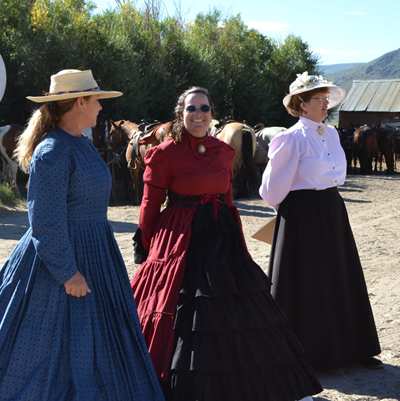 
Because of guests’ questions about the Hunewill history, Megan, Betsy and Denise (daughter-in-law) conduct walking tours of the ranch buildings. Dressed in 19th century hoop skirts for a more historical feel, the Hunewill women recount the early history of Napoleon Bonaparte Hunewill. Most of the original buildings still stand including the farmhouse, now turned into guest rooms and the dining/ kitchen areas. The living room is a mini-museum of Hunewill history containing original furnishings and photographs. As we wandered through the grounds on a cool, bright morning, it was difficult to imagine winter conditions of 20-foot snow drifts and sub-zero temperatures.

Riding doesn’t always take place on the ranch. Offered only once during the guest ranch season, a ride through the ghost town of Bodie was the highlight of the week. It was a logistical feat to arrange enough trailers and drivers to haul 35 horses and riders on unpaved, washboard roads to the gold and silver mining town, now a California State Historic Park.

Terri Geissinger, an interpreter and Bodie historian, rode along with us. Terri recounted the exploits of some of its colorful residents. During its mining boom, the population swelled to 8,500 and more than 2,000 buildings. A reputation of lawlessness was earned as a result of the many gunfights, robberies and other crimes that went unchecked 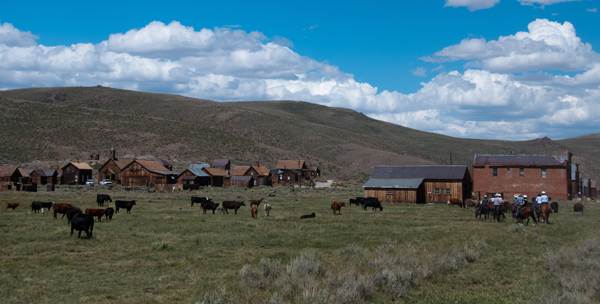 Horses and riders were unloaded about a half mile on the outskirts of town. Warm and breezy, the sun felt intense at 8300 feet. We made our way into town, stopping at points of interest while Terry told stories of life in Bodie. Interestingly, she pointed out that more miners died not of mining accidents or gunshot wounds, but from pneumonia. Prolonged exposure to the warm, moist air in the mines combined with the dry, cold mountain climate was the reason, no doubt exacerbated by conditions in the mines as well.

It was easy to be transported back to 1879. Most of the buildings are in a state of “arrested decay,” preserving the look as they existed when the residents lived there. Many of the buildings’ interiors are furnished and stocked with period artifacts, giving a glimpse of life back then.

The group became a tourist attraction that day as much as the town itself – we found ourselves the subject of more than a few photographers. The tour continued on into the surrounding hills, past mining sites now encircled by barbed wire to keep out the unwary and curious. Traces of a horse racing track and baseball diamond were visible near the outskirts of town.

What is a ranch vacation without herding cattle? After all, Hunewill is a working cattle ranch. The valley pastures are green and lush during the short summer months, allowing the cattle to fatten primarily on grass. Our job was to transfer a herd of heifers from one pasture to another through the ranch grounds and across a road on a California cattle drive.

Getting them through the pastures wasn’t a problem. Getting them to go through an open gate was another. They were hesitant on this cattld drive and refused to continue on. They pushed against each other like a rushing tide hitting a breakwall. Elmo and I stood guard next to the gate to prevent an escape down the side of the fence, but after a bit of patience and prodding, the herd continued on through the gate.

As the days unwound, the slow rhythm of ranch life began to reveal itself: the drum of hoof beats at sunrise while the mountains change hue, the clang of the meal bell, cattle mooing across the valley, whinnies of horses let out to pasture at the end of the day, the occasional hoots of an owl, and yipping of distant coyotes. At night, the valley laid under a canopy of stars streaked with a ribbon of Milky Way.

I did not want to leave. I was envious of the others who were staying for two more days. I was just getting to the point where my body stopped complaining. As I drove away, my eyes kept darting to the rearview mirror, for a one last look. Hunewill Ranch offers a glimpse of a lifestyle that few of us see and appreciate. I hope to see Elmo next summer.