How To Tame a Mustang: One Wild Horse’s Bumpy Road to Domestic Bliss

Since adopting a mustang in late 2016, I’ve realized how few people know that we still have wild horses running free in the United States. Even fewer are aware that the government rounds many of them up, and that they’re available to the public for adoption. 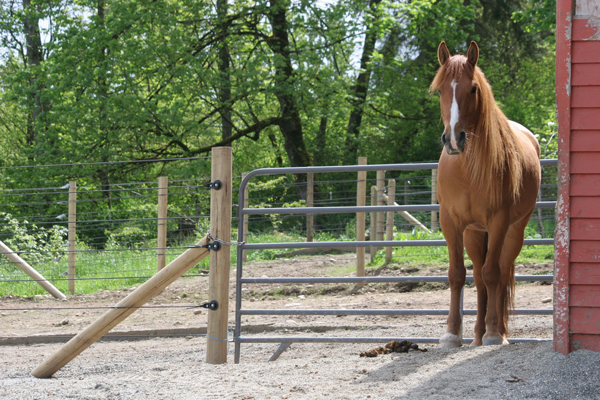 There are roughly 60,000 wild horses living on public lands across ten states whose populations are supervised by the Bureau of Land Management. In order to maintain sustainable numbers, this government agency conducts periodic roundups — or gathers, as they’re called — which remove a percentage of mustangs from their rangelands.

Once gathered, a mustang is eligible to be adopted and tamed by an approved individual meeting very specific facility requirements.

I’m not sure what possessed me to adopt a mustang. Years prior, during an emotionally eviscerating time in my life, I’d had a fierce notion to get on my horse — at the time an AQHA mare — and just keep riding. To ride until there was no more riding. To go all the way across the country. To feel free, unconstrained, like I could finally breathe again.

The crazy idea lodged in my brain and that evening, I looked up “ride across the country,” which brought me to the website of the Longriders' Guild, a society of people who ride thousands of miles across countries — continents, even. I wasn’t the only insane person on Earth! Hallelujah!

One consistent theme I encountered over and over again while researching The Longriders' Guild was the recommendation to use native breeds who are well adapted to the terrain and vegetation. In the United States, that means mustangs.

I’d never thought about getting a mustang before, but the seed of mustang longing was planted. It would be years — many years — before I’d consider actually adopting one. Back when I first came upon the idea, mustangs were generally considered not only wild, but also crazy — dangerous, even.

However, the tempestuous streak in me connected with the wildness in them, and I never really stopped thinking about it. As the years went by, I sold my mare, bought a reining horse, sold him and found myself horseless. I started traveling and riding wherever I went. But still, that daily connection, the relationship you build with your own horse, was missing for me.

That’s when I learned about the Kiger mustangs. Purportedly descendants of the Spanish horses brought to America by the conquistadores — although that’s somewhat debated — Kiger mustangs live in southern Oregon on both the Kiger and Riddle Herd Management areas. They’re flashy and beautiful baroque horses, usually dun or grulla with the occasional red dun or bay.

Kiger gathers happen only every four years, and I’d just missed the 2015 adoption. I resolved to wait until 2019, save up and get my Kiger. Of course, that’s when Shelby showed up on the Bureau of Land Management internet adoption site.

A four-year-old red dun, he’d been adopted and returned due to being a tough training case. He wasn’t the color I wanted. He was too short at 14.2 hands against my six feet of height. He looked nervous and awkward in his photos, but a BLM employee spoke highly of his conformation.

And there was just something about him. A feeling, I guess. So, I applied to adopt and was given a bidder number for the silent auction.

A horse wasn’t going to fit into my tiny urban condo, so I also had to figure out where I was going to keep him. I contacted stables around the Seattle area and asked if anyone would be willing to board a wild horse — and if they had the required six foot fences with approved shelter.

Miraculously, I found someone. And then I connected with another person who could haul him up from the wild horse corrals in Burns, OR.

And then the auction happened. I had a plan, a solid strategy, yet on some level, I didn’t expect to win. But I did.

When I saw that I had the winning bid, I texted my friend and told her, “I think I just accidentally adopted a wild horse.”

The night before Shelby arrived, I was a mess. I thought I was going to throw up. What was I, crazy? Adopting a horse sight unseen? And a wild one, at that.

Needless to say, I fell in love with this awkward red pony. In fact, he’s quite beautiful when he’s not all stressed out by being in a wild horse holding facility. But if I thought the adoption process was stressful, gentling a mustang would prove to try my patience.

Not all mustangs are difficult to gentle. Many are riding in full tack, or even at liberty, in 100 days or less. Shelby is not one of those mustangs.

Shelby — so named for the sports car because he’s bright red — is a Kiger. Kiger mustangs are known to be, umm, how do you say? Tough. He even had some training when he came to me, but you wouldn’t have known it. The first day, it took me two hours to get his halter on, something his previous trainer assured me that he knew cold.

If his head was close to the fence and I accidentally clicked the metal end of his halter against the wood, forget it. Shelby bolted, no questions asked.

A week in, I could put one hand on his shoulder, but if I touched him with two hands, he startled. Too much!

One day, I had him in the round pen. i was working on getting him comfortable with me by his side. I was next to his right barrel when the edge of my vest brushed his fur. He leapt forward, and then he spun to the left, planting his hind foot squarely on my boot — ouch.

I learned quickly that if I wanted our relationship to work, I was going to have to abandon all my goals and timelines and just work at Shelby’s pace. I adopted him in August and I thought for sure I’d be riding him by Thanksgiving.

The Horse Determines the Process

Unconventional desensitization exercise to get Shelby used to movement in the saddle. Photo courtesy Susanna Baxter.

These days, Shelby comes when I call him. He loves to have his extra long mane combed, and even deigns to wear a rain sheet so that I don’t have to deal with a wet and muddy horse all winter (we do live in the Pacific Northwest where mud is a season for equestrians). His favorite trick is sidepassing over to me when I stand on a mounting block or sit on the fence, or frankly any time he doesn’t want to do whatever hard thing I asked him to do, so I can scratch his butt.

Shelby is a one person horse, though. Trust is paramount, and he won’t let anyone else do things that I can do — simple stuff, like pick up his feet or put a blanket on him.

And he’s still more suspicious than any domestic horse I’ve ever seen. He’s fine with his western saddle, but show up with an English version just for a change that’s going to be a no on Shelby’s part. When I switched from a blue saddle pad — which he was fine with — to a black one, we had to start all over with, “This is a saddle pad, it won’t eat you, remember?"

He is getting better. New things take less time to introduce. He trusts me now and even lets me walk up to him when he’s in the vulnerable position of laying down.

Just Do The Next Thing

Over and over again, people ask me what I want to do with Shelby. While I don’t know if I’ll ever ride across the country on him (his favorite gait is whoa, after all), I always answer the same way: I want to do the next thing.

When I first got him, the next thing was touching him. Then haltering, then leading. After that, we worked on contact, and grooming, and picking up feet, and so many other things. It took me nearly two months to get him comfortable with a saddle.

I mean, I got it on him right away, but he wasn’t okay with it for two months.

Maybe one day we’ll chase cows, or ride endurance races. But for now, just working together on our next step is fulfilling enough.

About the Author: Susanna Baxter shares her equestrian adventure travels and the comedic journey that is gentling a wild horse. Follow her exploits with horses both wild and not on Instagram!