Experience a living tribute to the Old West in California’s capital. 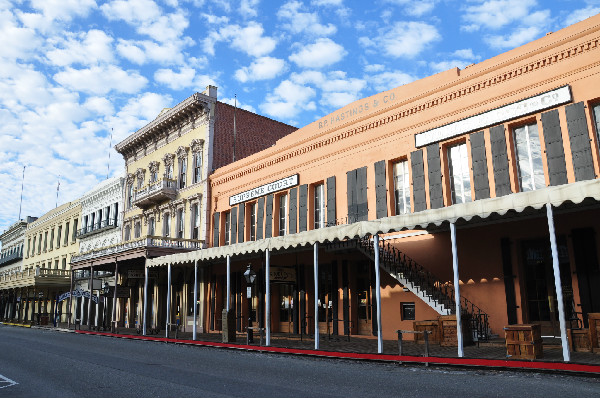 My first thought when arriving in Old Sacramento was – how uncomfortable would cobblestones have been in a carriage? Even crawling over them in my rental car with modern suspension, it felt pretty rocky, so I couldn’t imagine the jarring feeling in a stagecoach or buggy with the clip-clop of hooves up front. I’m always happy when a simple quest like seeking a fun dinner destination while on a business trip leads me into a horsey discovery, and this was one of those lucky moments. 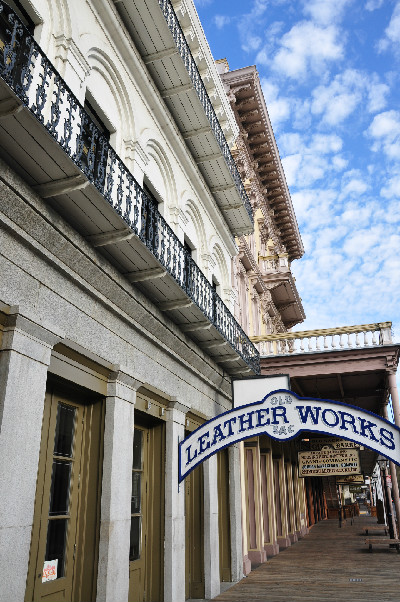 Old Sacramento's architecture reveals the fine craftsmanship and Spanish influences of the time.

When I drove into Old Sacramento State Historic Park, I immediately imagined what it would have been like to ride up on horseback. The buildings in this historic district look much the same as they did back when equines were primary transportation and when pioneers sought this vital stop on their Western journeys. Just beyond, glass skyscrapers reflected the ginger and purple sunset. The contrast of a modern city of government to the compact, ruddier life of the past made this a place I had to check out. 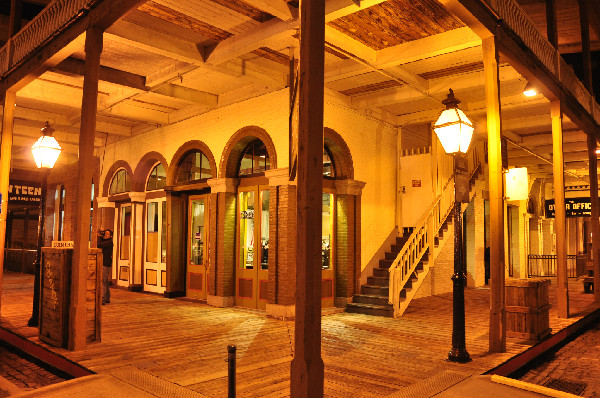 Shops of all kinds, from specialty foods to period clothing to novelties, tempt visitors in from the boardwalks.

Old Sacramento grasps that blending of old and new and produces a breathing historical setting. Broad board sidewalks, hand-carved beams and Spanish architecture create a several-block cove of bygone preservation within the larger city. Stone and wooden buildings summon visions of wagon wheels, buckskin, parasols and hoop skirts though bikes and trucks are parked in front. Souvenir and curiosity shops recall the provisions that settlers from many miles around would have traveled here to buy. Tattoo parlors evoke the excitement and bedlam that young explorers might have sought far away from the steadying influence of family and traditional culture back East. 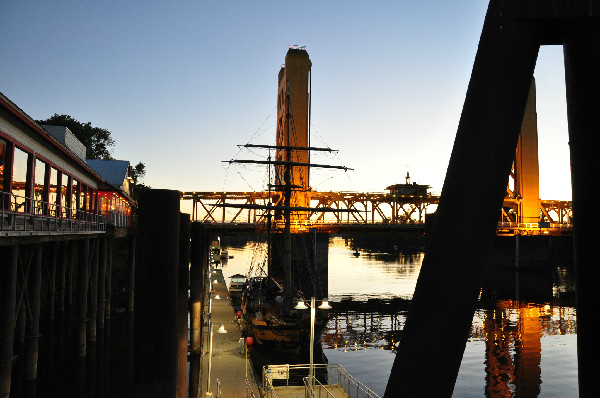 A tall ship set against a modern bridge displays Sacramento's mix of old with the new, and it reminds of the river transit that made Sacramento a key city of the Old West.

The legacy of California’s Old West roots is available in modern experiences. The region was previously home to Native Americans and known to Spanish explorers before Sacramento boomed in the 1850s as an American settlement. The city was characterized by gold fever, fires, floods, epidemics, Chinese immigration and pioneers from the East. A walk down to the Sacramento River, the lure and the lifeblood of the early residents, reveals dinner cruises and informative steamboat tours. The Wells Fargo & Co. History Museum highlights the transportation and technology of the time. The Old Sacramento Schoolhouse Museum invites children to play out the education style of more than a century ago. Take old fashioned photos, dine in a restored café, sample treats at the old-time candy store, or survey the California State Railroad Museum. 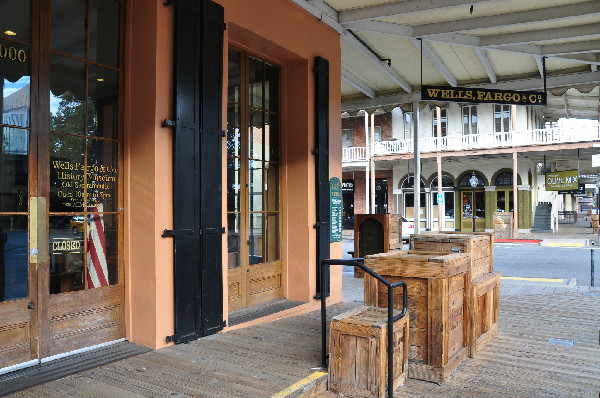 A prominent statue in Old Sacramento commemorates the city’s role in developing the West – with the help of horses. Directly beside the clamor, towering ramps and voluminous concrete of a freeway interchange is a tribute to the riders and horses of the Pony Express. A wiry rider and galloping mount charge into town with their mochilla of mail. Letters of births, weddings, passings, elections and milestones may have been inside, and he was determined to get this saddlebag across the country as fast as he could. Risk of death by hostile attack, blizzard or unhorsing would not deter him. Cast in bronze by sculptor Thomas Holland, this commanding pair and accompanying plaque remind us of the time when communicating with business partners and loved ones may have taken months, not seconds, and when brave young equestrians carried these messages across rivers and mountains.

The rider is carrying out his Pony Express oath by galloping the mail into town. The building across the street was once home to California's Supreme Court.

The Pony Express only operated for 18 months, from April 1860 to October 1861, but it left behind plenty of material for books, legends and daydreams. The system required about 400 horses ready along the line, and each had been carefully selected for speed and stamina. Lightweight saddles were used, and each rider would cover about 80 miles with eight to 10 horses. The complex system involved over 150 stations and about 400 employees beyond the 80 working couriers. Advertisements called for teenage orphans as the ideal riders, and William “Buffalo Bill” Cody was perhaps the most celebrity of these young men.

The company owners had developed the swift mail delivery to serve California’s rapidly inflating Gold Rush population. Pony Express service was prohibitively expensive for some, but sending a letter via this string of cowboys and racing ponies could get a message from St. Joseph, Missouri, to San Francisco, California, in just 10 days. Competing mail companies, the Civil War and the telegraph quickly diminished the line. Sacramento had become an important end station from which the mail was then transferred to San Francisco by steamboat.

Once a year, Old Sacramento holds a full tribute to the era, complete with dusty streets and dozens of horses. Over Labor Day weekend, the historic district hosts Gold Rush Days. More than 200 tons of dirt cover the asphalt and cobblestones, returning the streets to the 1850s. Equines visit the city to pull wagons, carry costumed riders and camp out on the tented lawn. Horses are partners in reenacting this time and convey visitors in all manner of buggies, coaches and wagons. 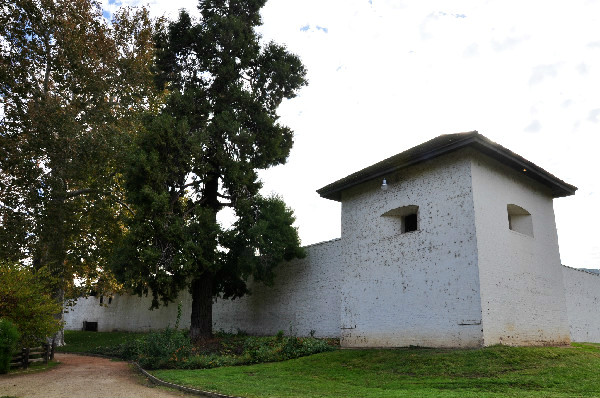 Abandoned soon after the 1848 Sutter's Mill discovery, Sutter's Fort has been restored to its 1847 state.

Sutter’s Fort is across town from Old Sacramento, significant both as the settlement precursor to Sacramento and as the home of John Sutter. He was the owner of Sutter’s Mill, the location several miles northeast that ignited the Gold Rush in 1848. Sutter had begun building his fort in 1839, while California’s land belonged to Mexico and the few Europeans were greatly outnumbered by Native Americans. From the fort, Sutter ran his agricultural empire and sent aid to the famous Donner Party. The thick brick walls remind visitors of the dangers that would have threatened an early pioneer family and their livestock, those both human and predator. Sutter's Fort State Historic Park welcomes visitors to explore the living conditions of early California, and children sometimes arrive by covered wagon for overnight field trips.

Sacramento is a mix of the historical and the contemporary, with the vitality of both. Stagecoaches and light rail, depots and skyscrapers, schoolhouse and university, cobblestones and freeways, horses and semis – indelible marks of the American era’s claim. Dining on the porch of a Mexican restaurant in Old Sacramento, I looked at the aged hotel across the street and imagined the range of shenanigans that had probably occurred in its shadow, perhaps not too unlike what goes on around it today.