Western Massachusetts and the Pioneer Valley are home to the Five College area of Amherst, Hampshire, Smith, Mount Holyoke, and the University of Massachusetts. Within this region are the towns of Sunderland, Leverett, and Montague. Mount Toby Demonstration Forest is 755-acres within these three towns. It’s a favorite destination for outdoor enthusiasts, including equestrians. Mount Toby is just east of the Connecticut River. The forest is wooded hills and knolls, with waterfalls and glacial kettle ponds. Cranberry Pond is the most notable kettle pond. 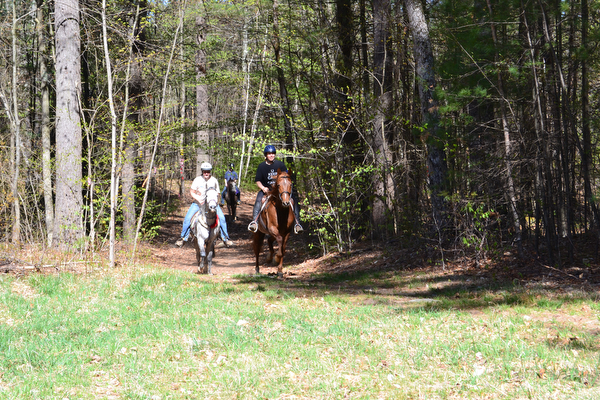 Equestrians riding along Leverett Trail. Photo by The Hammond Family

The Department of Natural Resources Conservation at UMass-Amherst manages Mount Toby as a teaching, research, and demonstration forest. Much of the forest has been logged more than once; however, some parts are inaccessible and have never been logged. Recreational users are permitted in the forest as long as they don’t interfere with teaching and research. UMass partners with many of the recreational user groups. The Massachusetts Department of Conservation and Recreation (DCR) operates a fire tower on the summit of Mount Toby. Although the top is closed, hikers can climb some of the steps for 360-degree views from the platforms.

Captain Elnathan Toby was a colonial settler from Springfield, and the first Caucasian to summit Mount Toby. The peak was named after him. Mount Toby is the highest of the hills in the area, at 1,269 feet. Roaring Mountain, Ox Hill, and Bull Hill are part of the Mount Toby Demonstration Forest; however, they are collectively known as Mount Toby. Although these hills aren’t the tallest in the Metacomet Ridge, the slopes are steep with tough trails. Small cliffs and ledges lie to the east and west of Mount Toby. A deep valley with a brook divides Roaring Mountain in the south and Ox Hill in the north. The brook forms a waterfall. It’s one of three prominent waterfalls in the forest.

Mount Toby is known for its biodiversity. It was never cleared for agricultural use in the 18th and 19th centuries, and species thrive because they’ve been undisturbed. Equestrians must stay on the trails and not damage the flora. Of the 45 native fern species that can grow in Massachusetts, 42 of them are found in the Mount Toby Demonstration Forest. Orchid species also thrive in Mount Toby. The Showy Lady Slipper and Ram’s Head Lady Slipper are popular and noted throughout the forest.

I was introduced to Mount Toby when I competed in my first 25-mile competitive trail ride in 2010. The Eastern Competitive Trail Ride Association (ECTRA) sanctions the Leverett 25-mile ride. The first loop of the ride was on dirt roads and woods trail in Leverett, while the second loop of the ride was on the backside of Mount Toby. Leverett is one of my favorite rides, and I try to attend every year. 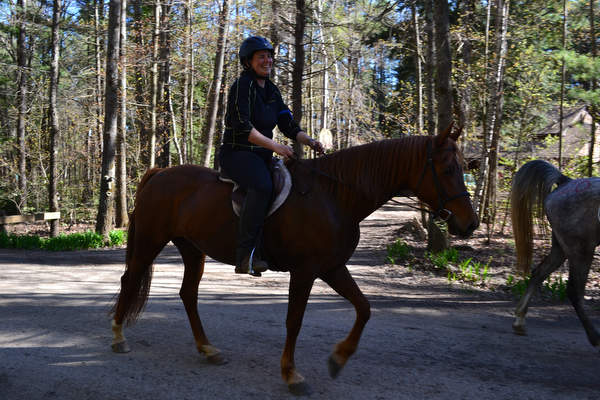 Parking is available on Reservation Road in a small, paved lot. You can also pull off on the side of Reservation Road. Arrive early; the lot and side of the road quickly fill on weekends. There are no restroom facilities. An information kiosk is located at the trailhead. Bring your own map. Clean up hay and manure around your trailer before you leave. Expect to see many other trail users out in the woods. I have seen hikers, dog walkers, and the occasional all-terrain vehicle on every ride in the forest. 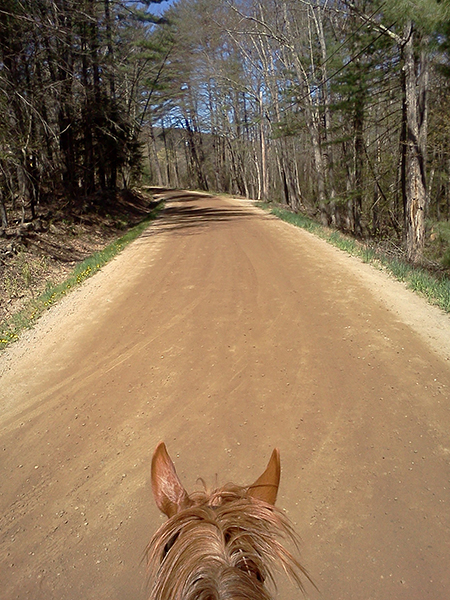 Brooks and naturally occurring water out on the trail give equestrians the opportunity to water horses. A couple of bridges aren’t safe for horses, and you’ll need to go through the stream. The power line trail, Robert Frost Trail, Sunderland Cave trails, and the waterfalls are foot traffic only. These are labeled on the map, which can be downloaded and saved to your Smartphone or printed.

The geology dates back 190 million years. Those interested can read more about the Metacomet Ridge on various websites. The most important part of the geology for equestrians is that it’s rocky. Fire roads on the backside of Mount Toby are sheer rock in places, and slow you down to a walk. I always recommend hoof protection, and on Mount Toby, a good dose of caution.

The railroad tracks run through the eastern portion of Mount Toby, in Leverett, parallel to Route 63. Trains pass through twice a day on these active tracks. The second train is in the early afternoon and usually has warning whistles. Use care if you choose to cross the tracks. Never ride down the tracks.

Ride with a map – the trail isn’t blazed for recreational purposes. The blazes or markings that you see are part of the research and demonstration being done by UMass. The Robert Frost Trail is marked with orange blazes. Horseback riding is permitted in some areas on this statewide 47-mile trail, but the sections in Mount Toby are foot-travel only. 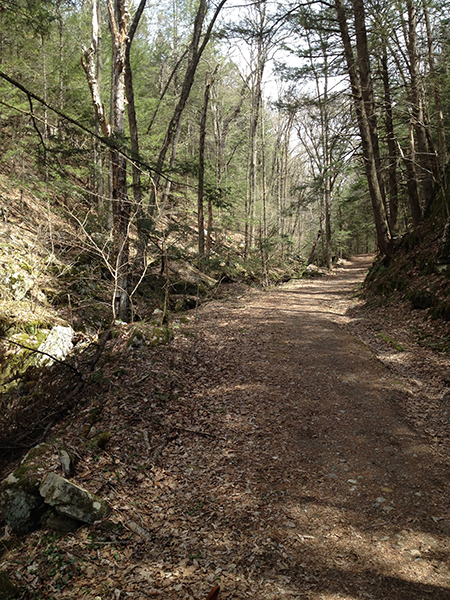 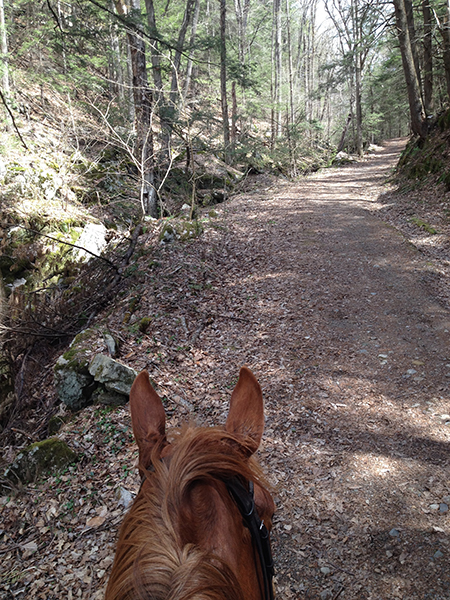 Mount Toby delights the trail rider with the rugged forest, challenging trails, and natural scenery. It quickly becomes a favorite that you visit time and again. See you on the trails!