Horseback Riding in the Republic of Georgia

If someone asked me how many times I’d been to Georgia, I wouldn’t know how to answer. There are three Georgian entry stamps and three Georgian exit stamps in my passport, but all of them were made within a one-week period. So did I visit Georgia once or thrice? 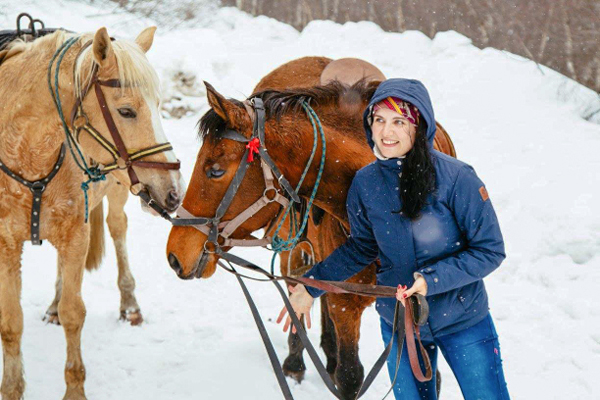 We had been planning a trip to Georgia for quite a while, so I was looking for places where we could ride when I got a crazy idea. Georgia, Armenia and Azerbaijan were located so close to each other that it would have been a huge mistake not to add all three countries to my riding collection. I succeeded, mind you, but today I want to focus on our first day in Georgia.

We arrived at Tbilisi airport at 7 a.m. and immediately hit the road to Kazbegi, one of Georgia’s highest peaks. The road leads through the pass, and, although spring was in full sway in a valley, just a few steps higher, on the mountains, winter hadn’t given it an inch. Due to the heavy snowfall, which turned the world outside our Delica into white nothingness, lots of cars had to stop and wait until a snowplow could clear the road. However, we continued to ascend, and I involuntarily started to draft a plan B just in case we got stuck like the others had. However, we didn’t need a plan B. Thanks to our worn out Japanese-auto-industry masterpiece, we got through the pass without a delay. 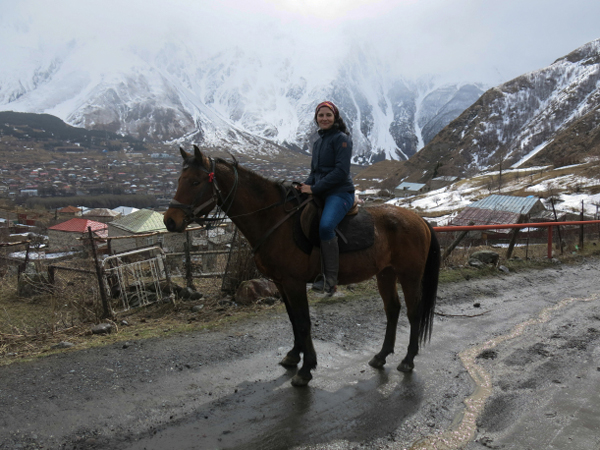 This story wasn’t supposed to make it to my blog as we hadn’t planned to ride on that day. But Tornike, our driver, told us that instead of going to Gergeti Trinity Church by car, we might as well rent horses. He called his friends and, by the time we arrived at Stepantsminda, a local teenage guide had brought us two horses. We asked if we needed to wait for another one, but he explained with gestures that he would walk the horses up. 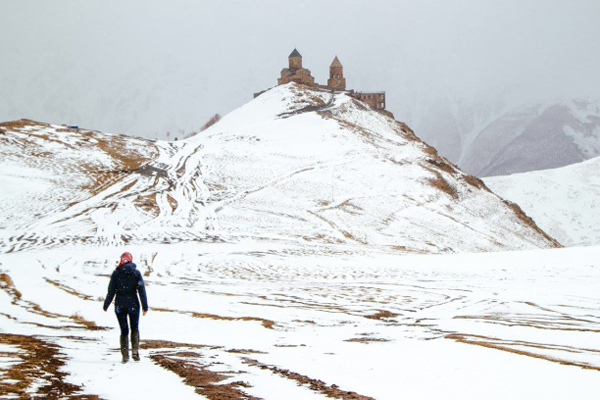 I’m sure that it wasn’t a big deal for him and he did it every day, but I felt sorry for him. My husband, however, was happy that he didn’t need to focus on steering his horse, so he could concentrate on taking pictures.

We started our journey to the church. It seemed to be so high in the mountains that I thought we wouldn’t be able to make the return trip before dawn. 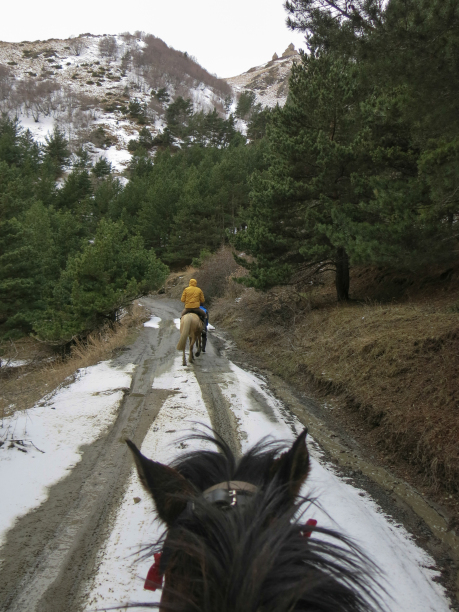 Of course, a church built at that height (2,170 meters) in the 14th century is bound to have a legend explaining its beginnings. The Gergeti Trinity Church is actually associated with a number of distinct legends. Some say it was built at the spot where Mother Mary appeared to local shepherds; others say that an eagle or even a crow pointed out the place.

As we followed the winding road under the pine trees, huge flakes of snow fell. It looked so peaceful, pure and poetic that I started to remember creative works that glorified the snow: Alessandro Baricco’s Silk, Orhan Pamuk’s Snow, the film, House of Daggers, and countless Japanese haiku.

About one hour later, our guide stopped the horses and ordered us to dismount. He waved his hand forward, and we went in that direction, not really knowing what to expect. We climbed another snowdrift. The moment we stepped into a valley, a tiny window of blue sky opened in the clouds. We considered it to be a good sign. 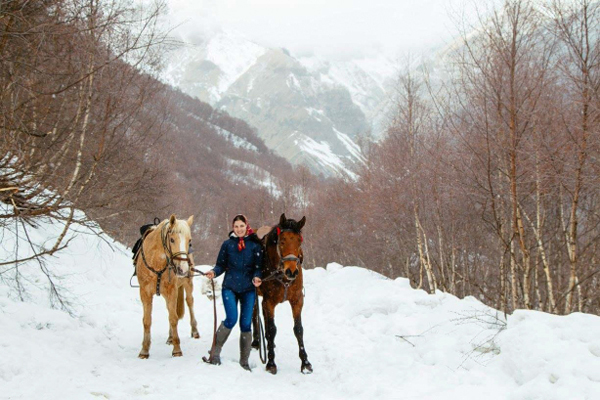 Half an hour later, we reached the church. Characterized by rough beauty, the small building was filled with centuries of palpable faith, hope, prayers and blessings. Inside the church, under the almost completely black icon of the Mother of God and her Child, there were offerings from those whose prayers had been answered.

We lit candles, stood in silence for a while then went back to our horses.

On the way back, I pondered the fact that there were places on the Earth that undoubtedly felt special to whoever visited them. Being religious or non-religious didn’t seem to matter. One could call them holy or sacral, places of power or centers of the universe, the Earth’s crystal lattice spots or places of concentrated energy — their name didn’t matter. In every era, all nations had dedicated such places to the worship of their gods. Gergeti was one such place, and I felt enormously grateful that my travels had taken me there.

About the author: Yulia Frolova, self-proclaimed literal “globe trotter” who set herself a goal of riding a horse in every country she visits. Her count so far: 31. Her carrier requires 15-20 international travels a year and might be considered a big obstacle for horse riding, but she sees it as an opportunity to try different riding styles and learn from horsemen all around the globe. Visit her blog where she keeps chronicles of her travels and experiences and follow her on Instagram @equi_geo.