Horseback Riding in the Nebraska National Forest to Support 4-H

Horses have long been a part of Nebraska’s landscape and culture. The state’s 4-H Horse Program aims to bring along young riders who are responsible, self-disciplined, thoughtful and caring. Kids and adults participate in the fundraising trail ride in the Nebraska National Forest at Halsey to celebrate its 20th anniversary.

“This story was originally published in the November 2018 issue of NEBRASKAland Magazine.” 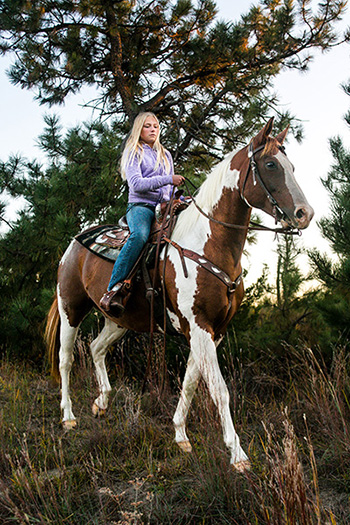 Lillyanne Lewis of Ord rides her paint horse during the 4-H Camp Trail Ride in the Nebraska National Forest.

Head, Heart, Hands and Health – since 1958, the Nebraska 4-H Foundation has been supporting youth through hands-on projects that encourage them to stay active and engaged in their communities, and prepare them for the future. With programs ranging from animal science to business to the arts to science, technology, engineering, and mathematics (STEM), the foundation’s mission is to help provide the financial backing and manpower needed to 4-H clubs across Nebraska, which collectively serve about 143,000 young people annually.

Open to children ages 5-18, regardless of financial background, Nebraska 4-H would not be possible without volunteers and generous donations. In partnership with Nebraska Extension, the foundation is supported by 12,000 volunteers and hosts key fundraising events throughout the year. 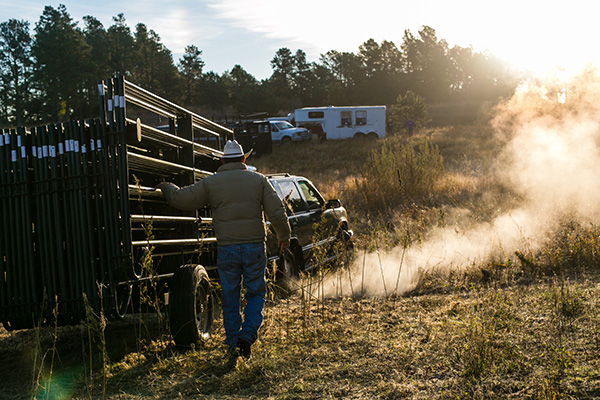 Local ranchers provide panels to pen in horses for the 4-H Camp Trail Ride in Halsey. They also donate Nebraska certified weed-free hay, which is required by law inside the Nebraska National Forest to prevent the introduction of invasive plants.

When Nebraska Extension educators and friends of the 4-H Horse Program met in November 1998, they chose the Nebraska National Forest at Halsey as the site for the annual state 4-H Camp Trail Ride. Established in 1902 by Charles E. Bessey, this man-made forest offered recreational opportunities unlike anywhere else in the Great Plains, and for Sandhills and corn country horse riders, the forest is a pleasant change of scenery and terrain.

Originally, proceeds from the ride went to support national trips for the Nebraska 4-H Horse Program, but that has changed periodically depending on financial need. Currently, funds are used to maintain the 4-H Camp in Halsey and to provide “camperships” for young people to attend other camps throughout the year. 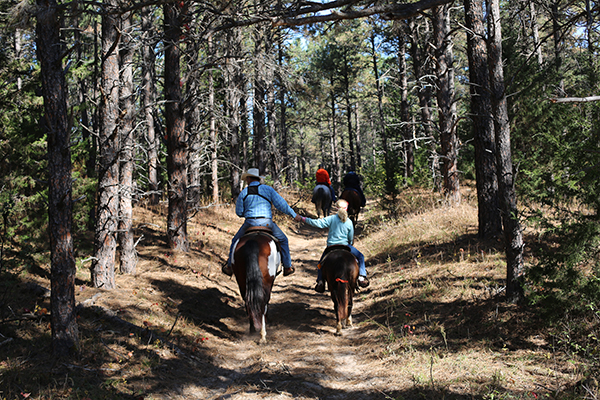 Bruce Treffer of Cozad rides alongside his daughter, Sarah, who has been attending the 4-H Camp Trail Ride in Halsey since she was one year old.

Located within the national forest, the Halsey camp is one of two 4-H centers in the state. It was dedicated in 1962, and in addition to hosting youth functions, the camp is also available to outside organizations and events; the Nebraska Game and Parks Commission’s Becoming and Outdoors- Woman Weekend called the 4-H Camp in Halsey home for many years.

Stuart Shepherd, executive director of the Nebraska 4-H Foundation, said, “The funds raised from the trail ride have been vital to supporting the 4-H Camp, which also benefits surrounding towns. Weddings, graduations, proms – the camp operates as a community center for the region.”

And in turn, the trail ride could not be successful without local help.

True to 4-H fashion, the weekend requires all hands on deck. Whether it’s local ranchers who lend their panels to pen in horses or donate Nebraska certified weed-free hay – required by law in the forest; or all the volunteers who keep the event running, who cook meals and spend time mentoring young riders while out on the trail; or the Nebraska Forest Service staff who agreed to maintain and open up a small pasture – now called “Windmill 25” – to serve as parking and trailhead ... the individuals who make the 4-H Camp Trail Ride possible could not be faulted for being short on heart.

Horses have long been a part of Nebraska’s landscape and culture, and the state’s 4-H Horse Program aims to bring along young riders who are responsible, self-disciplined, thoughtful and caring. Many of the youth riders at Halsey are current 4-H members, but this ride is also every bit as much for the adults. 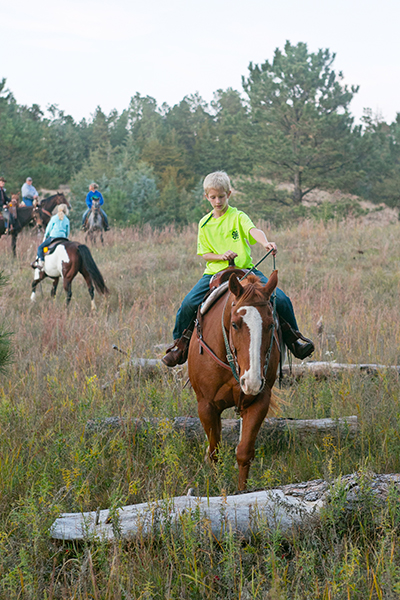 Treffer’s son, Greg, leads his horse over small log obstacles. Greg has also been riding since he was a toddler.

Pulling in Nebraskans from all corners of the state – both city and rural, the forest’s central location sees an average of 100 riders each year, and in some years, the foundation may welcome as many as 150. Men, women, and children of all ages – including toddlers who share the saddle with their parents – have enjoyed Halsey. They come to explore the forest’s miles of pine-shaded trails, open Sandhills country, the camp atmosphere and friendships old and new. And after 20 years, many of these riders have become regulars, returning year after year – some coming back with growing families. 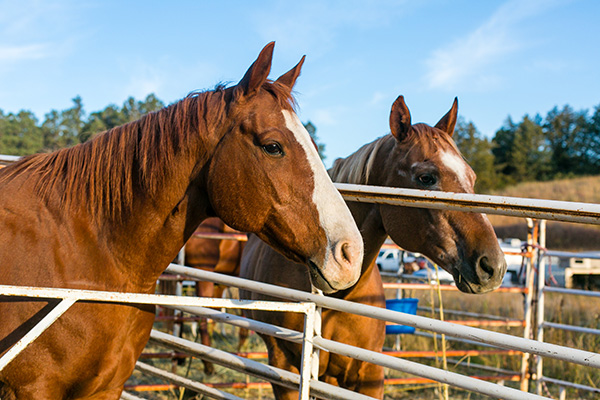 Horses are kept inside pens available at the Windmill 25 area in the national forest. It is also where all trail rides begin and end.

“There’s at least one lady who comes every year, ever since she was a 4-H youth in summer camp,” said Dewey Teel, 4-H Trail Ride co-chair.

And those who don’t ride, the delicious Saturday night steak dinner and live and silent auctions are enough to convince many locals to enter the forest.

“Whether or not a person comes to ride, most like to see that their money is going to something that is local to the Sandhills region,” said Teel.

With large stands of forest and seemingly endless, wide open spaces, 4-H trail ride guides have access to about 30 miles of trails within 10-12 sections. Morning rides on Saturday and Sunday are considered short at approximately 4-6 miles, while the Saturday afternoon ride ranges between 10-12 miles.

“You can see for miles and miles in the Sandhills areas, but when you get into the forest – even if you’re messing around for only a minute or two – you can’t see very far and you can get lost,” said Bruce Treffer, a 4-H Camp Trail Ride charter committee member.

Additionally, if scheduling allows, riding clinics are available in some years, taught by horse experts who want to share their skills and knowledge. They may include exercises such as opening and closing gates, learning how to ride over natural obstacles and desensitizing activities.

Trail leaders recommend that first timers practice riding out with others before coming to the trail ride, which can be overwhelming to some horses. 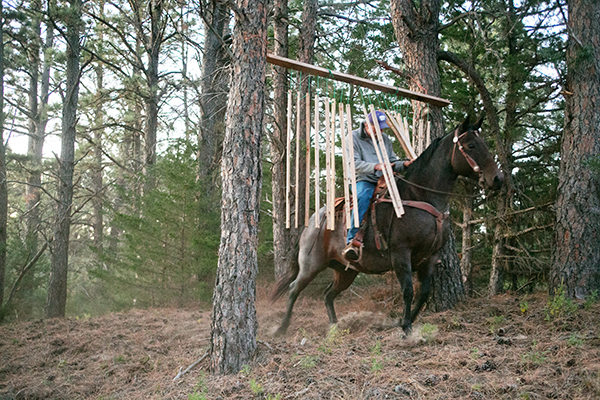 A rider urges his horse through a “scary” curtain of wood chimes, a desensitizing exercise that was part of a riding clinic available in 2014.

“There’s an impact in seeing so many horses going out that first time,” said Teel. But once here, to ride as part of a a large herd is a magnificent experience. Then at the end of the day on Saturday, after a full day’s ride and a delicious evening meal of steak, baked potato and green beans, a bonfire at Windmill 25 completes the camp atmosphere.

“This isn’t a commercial trail ride,” said Gary Stauffer, who has been 4-H Trail Ride co-chair since its inception. “The area is picturesque and unique, but there aren’t many amenities, so haul in what you’ll need.”

Staff recommends that participants drive into the Windmill 25 site with 4x4 vehicles. Port-a-johns will be provided, but those looking for a more comfortable camping experience may look to The Forest Service’s Bessey Recreation Complex and Campground, which offers water and electric hookups.

For participants not hauling in RVs or live-in trailers, the Nebraska State 4-H Camp does offer cabins for a small fee, assigned on a first-come-first- served basis. There are also motels available in the nearby towns of Halsey and Thedford. 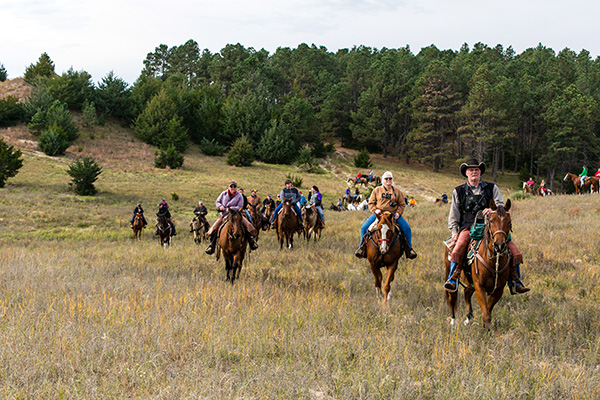 Riders Terri Licking (purple jacket), Kathy Potthoff of Lincoln and Bryan Bechtel (right) of Henderson and many others ride out of the trees and into more open Sandhills country.

Also, riders should be prepared for any type of weather in October. Trail riders have experienced weather from sunny and picture-perfect to rain and wind to snow. One year, a blizzard blew through the area. Although attendance took a hit, the trail ride has never been cancelled.

“Everyone still had a good time,” said Teel. “Gary just took us through the trees and it was the prettiest drag we’ve ever had. There was snow everywhere.”

If you’re still not convinced to come ride, perhaps Bruce Treffer’s thoughts might persuade you:

“Horses and horse people ... when you gather people with common interests and place them in the Sandhills – one of the largest, most unique pieces of grassland there is in the country with a national forest in the middle of it, and with the 4-H Camp nearby which provides a unique camp setting ... the whole thing comes together. This has been the best place for us to meet, ride and support 4-H. It has fit our mission so well, so we’ve never thought to move the trail ride anywhere else. ”