Woke up at 5 o’clock in the morning in my hotel room, washed, packed my gear, and then hit the road at 6 o’clock for the 1-hour drive to the Horseshoe Meadows Pack Station in the mountains outside the small dusty town of Lone Pine. Every year I do a week-long horseback ride. This year’s adventure was a horsepacking trip into the Sierra Mountains of Central California. By 7 o’clock, our group had gathered at the pack station. The cooks had breakfast waiting. We loaded our plates with eggs, bacon and pancakes, grabbed a cup of coffee, and then sat on logs to eat and get acquainted.

After breakfast, we broke into two groups of ten guests, three wranglers, one cook and one veterinarian each. We then mounted our horses and rode the winding rocky mountain trail into the shady forests of Red Fir, Foxtail, Sugar and Jeffery pines, through mountain meadows, and along meandering streams between Kern Peak and Mt Whitney. The mountain peaks are stark and stunning. You’ll recognize this country as the film location for the Humphrey Bogart movie “High Sierra”, where Bogart plays “Mad Dog Roy Earle” who tries to escape the police by hiding out in the Sierra Mountains after a botched casino heist. Unfortunately for Bogie, he was tracked down and shot. Unlike Bogie, we all managed to make it out alive. 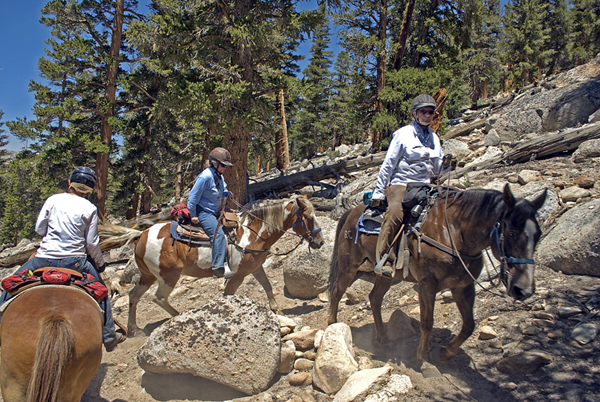 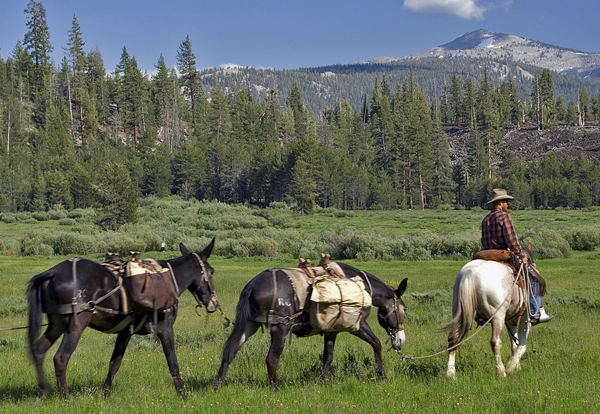 This ride is a college course offered every year by the University of California at Davis. The course is entitled, “Mountain Horsemanship: Veterinary Care and Horsepacking in the Wilderness”. You can register for the trip through UC Davis Extension Equine Programs, allowing you to deduct the tuition cost of the ride on your income tax return. Most obligingly, UC Davis sent me a 1098-T form for this purpose.

This trip combines adventure and education. We learned wise wilderness use, where and how to set up and take down a camp, how to outfit a pack mule with supplies, and tie the supplies on the mule with box and diamond hitches. We had daily lectures on such topics as horse nutrition, temperament, confirmation, diseases, and veterinary care. We were taught how to saddle, bridle and put a shoe back on a horse. We learned just about every knot known to mankind, such as half hitches, buckles and bowline, slip and square, tie-up, loop, pig-tail, figure-eight, and trucker’s knots. We learned how to string a picket line and tie the horses to it. These are skills we’ll all need to know because the world will soon run out of oil and we’ll all be back to riding horses. So, I reckon I’m ahead of the curve on this one. 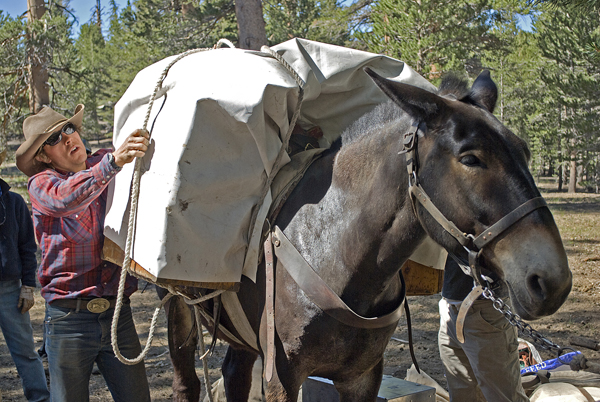 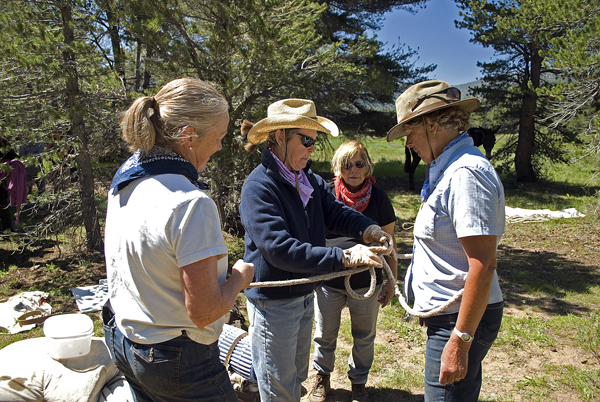 Learning every knot known to mankind.

It took a full day to ride through Horseshoe Meadows, up Trail Pass, stopping for lunch at Mulkey Meadow, and then through surrounding forests and hills to reach Ramshaw Meadow, our first destination at an elevation of 10,000 ft. Kern Peak is just a spitting distance to the south, and Mt Whitney is a bit further to the north. Even though it was mid-July, this was springtime for the alpine meadows. The meadows were a riot of color with blue lupine, red penstemon, white primroses, orange poppies, yellow mustard, gray pussy paws, and purple vetch.

Once we reached Ramshaw Meadow, we took care of the horses, pitched our tents, and headed to the stream for a dip into the ice-cold water to wash away the trail dust. Our first dinner was hamburgers with all the fixins’. After dinner, we took turns introducing ourselves more formally. The guests in my group included a young gal from Arizona who aspires to be a veterinarian, a young couple from Mammoth Lakes, three gals from Maryland, three gals from California, and me from Michigan. We ranged from experienced riders to no experience. Our cook was Renae and the wranglers were Mark, Tyler and Chaz. All were local folk from the Owens Valley, except Chaz who was on loan from the Grand Canyon. As night fell and the stars came out, we headed to our tents for a well-earned sleep.

We ate well. Every morning, it was eggs and pancakes, with bacon, ham or sausage, and an endless supply of coffee. We brown-bagged our lunches and ate on the trail. Dinner was typically beef, pork or chicken. Packing and cooking such foods in the wilderness is no easy task, so Renae quickly earned our admiration and undying gratitude.

After breakfast, we had our first lecture from the veterinarian, Janet. It was about good and bad horse confirmation, using two of our horses as examples. After tending to camp chores, packing our lunches, and saddling our horses, we rode out past Red Hill and the ancient volcanic Cinder Cone, ate lunch at an old cow camp and then headed back to our campsite through an enchanted forest of Incense Cedar trees.

The following day we broke camp, packed the mules and rode all day through forests and meadows, crossing mountain streams to reach our next campsite at Little Whitney Cow Camp. We spent two days at this location with a side trip to the Natural Bridge that spans the headwaters of the Kern River. The final two nights were spent at Big Whitney Meadows where we joined up with the other group of riders. Our side trip was to the pass at the foot of the Boreal Plateau. 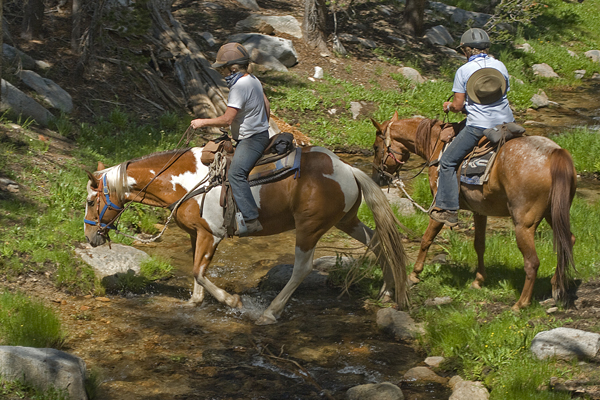 
We had eight pack mules to carry our camping gear and provisions. The mule is a rather unfortunate looking creature with its long ears, wall-eyed forehead, Roman nose, narrow shoulders and hips. Yet, there is much to admire about a mule. A mule will work hard and patiently all day long just for the privilege of nipping you at the end of the day. Or maybe the mule just wanted to eat my shirt. I noticed that mules admire horses, following them around like lost puppies. Mules may fight amongst themselves but they never argue with a horse. I’m not sure why. Maybe it’s because their mommies were horses or maybe it’s because mules are awe-struck by the horse’s superior intelligence and uncanny good looks.

Mules are also fearless creatures. Unlike a horse that will run from a predator, a mule dislikes predators and has the natural instinct to attack. Because of this behavior, our wranglers would put two mules, Chip and Kowalski, on “bear patrol” ever night to chase away bears, mountain lions, and other creatures that roam the night. Late one evening at Big Whitney Meadow, I was sleeping in my tent when I was rudely awakened by a pack of coyotes just over the hill, yapping lazily at the moon. Suddenly out of nowhere, I heard the thundering hooves of Chip and Kowalski heading straight for my tent. I though for sure I was goin’ to be trampled. Fortunately for me, those two knot-headed mules narrowly missed my tent as they lit after those coyotes and chased them off in good fashion. I’ll bet those boys had great fun in doing so, but sure as heck it made a nervous wreck out of me.

On our final day, we rode out of Big Whitney Meadow, up the rocky switchback trail to Cottonwood Pass for a majestic view of the valleys on either side of the mountain divide. Down the mountain slope we rode, back to Horseshoe Meadows in the valley below. This was a unique trip. It increased our knowledge about horses and mules and allowed us to work with them like wranglers, instead of merely being riders. I’m looking forward to another trip with this outfitter (Rock Creek Pack Station). That trip will be into the Ansel Adams Wilderness. 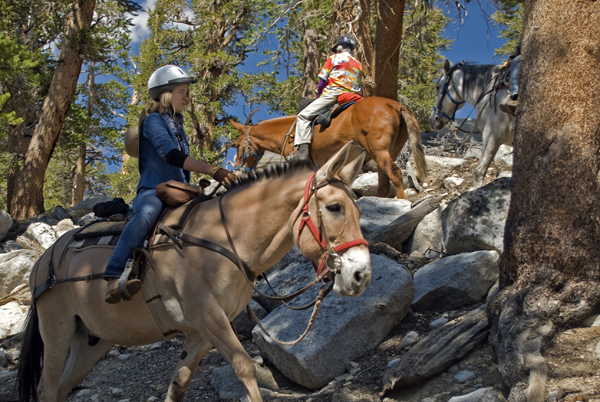 Riding up the rocky switchback trail. 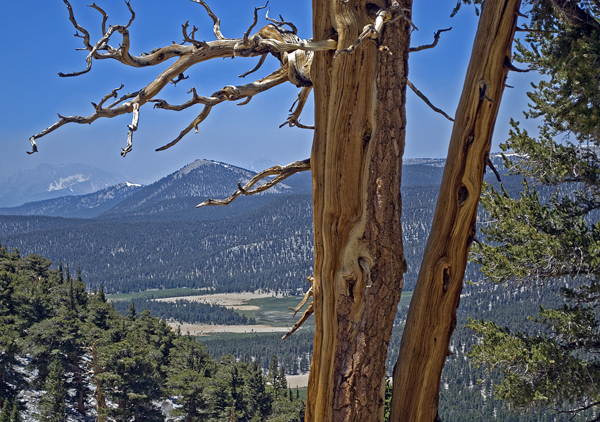 A majestic view from Cottonwood Pass.

After the ride, I spent a few extra days in the Owens Valley to visit the Alabama Hills, Mono Lake, Yosemite, Bristlecone Forest, and the ghost town of Bodie, where every second was a Kodak moment. If you take this horse ride, I highly recommend staying a few extra days to sightsee this remote and picturesque part of California. 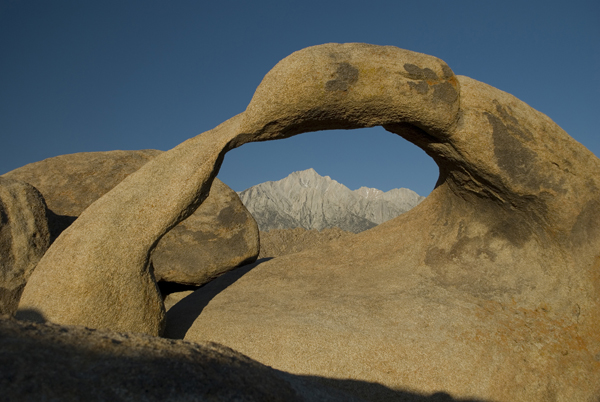 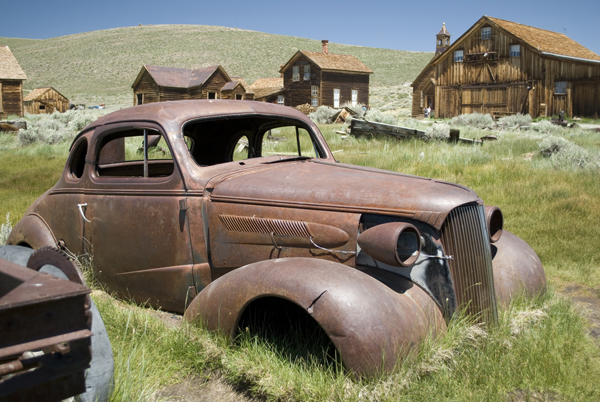 
Learn more about the Mountain Horsemanship: Veterinary Care and Horsepacking in the Wilderness course through UC Davis Extension.