Juan Luis lit a cigar, as he starred at me from beneath his navy blue baseball cap. A cooler version of Tom Sellick, Juan was dressed in his park guard uniform that included a beige button down shirt with a Doñana National Park patch emblazoned on his sleeve. He sported loose canvas pants, and well-worn, knee high riding boots. Juan was taking his usual daily ride to patrol the park and had invited me to come along. I felt privileged, as he introduced me to “Figo”, a gorgeous white ten-year-old Andalusian. 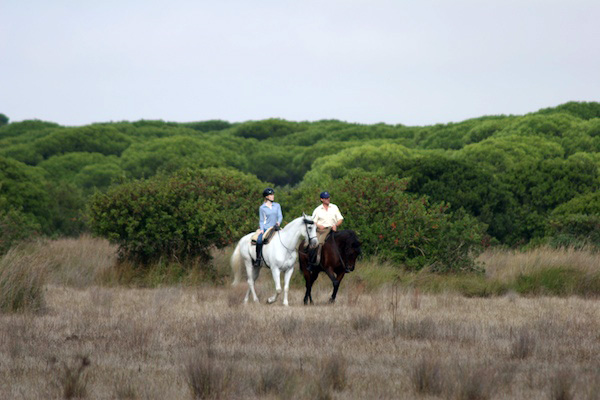 Andalusian horses are highly valued in Spain and around the world. These high-stepping, often mythological-looking creatures, with their flowing manes and round eyes, are frequently described as noble, gentle and willing. I could instantly tell that Figo fit this description.

Figo was fitted with a vaquera saddle. This meant that I would be comfortably sitting, similarly to the Western style riding, and leading the horse with my reins in one hand. The vaquera saddle has traditionally been used when working with cattle. It is fashioned to mould to the horse’s back, and has large, steel, rectangular stirrups and a soft, sheepskin seat. 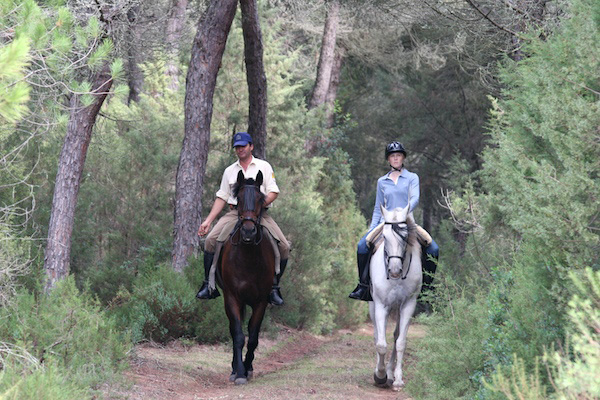 It’s quite comfortable, as it is designed for many hours in the saddle. The stirrups take a little getting used to at first. They are made to protect your feet against a bull’s horns, and would protect mine, as we ventured into the darkness of the pine forest.

Doñana National Park is located on the coast of Southern Spain, where the Atlantic Ocean meets the Guadalquivir River Delta. It is a truly wild and varied destination. With three different ecosystems, you can venture through marshes, forests and vast sand dunes, all within a few hours. Listed on UNESCO’s World Heritage Site as a preserved biosphere, Doñana is one of the largest parks in Europe. 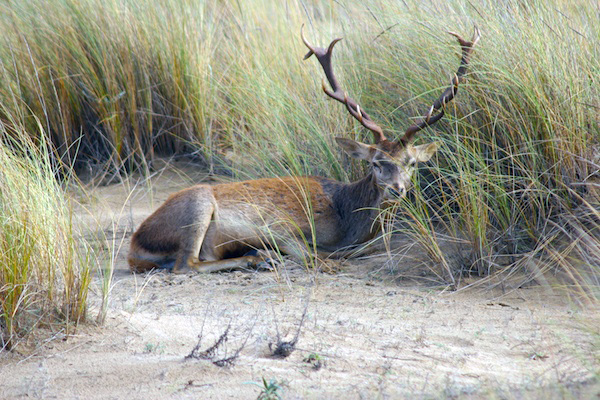 Doñana is also a stop along bird migration routes between Africa to Northern Europe. Millions of birds nest, breed or simply rest here. Bird watchers and animal lovers flock to Doñana to see endangered species, such as the Imperial Eagle and the lynx.

Not many people venture through the trails that Juan Luis and I navigated on horseback. Though tourists are welcome to visit the park, much of it is off-limits in order to protect the environment. Jeep tours are a popular way to see the park, as are hiking trails. In order to ride, you have to hook up with a tour company, who can direct you through the best places on the beach and on the trails surrounding the park or sign up for a Spain riding holiday that includes a day trip to Doñana.

The initial trails, which wind through a pine forset, were narrow, making it necessary to use my free hand to move branches out of my way. As I attempted to use my rusty Spanish to chat with Juan Luis, who spoke no English, the conversations grew creative. Juan described the types of trees and changing landscapes using simple phrases for my benefit and elaborate gestures. We passed a white, sun-dried deer skull along the path and headed out of the forest and into a clearing. A group of fallow and red deer froze and stared curiously at us before darting onward. There were hundreds of deer. As we moved across the field, they would move onward, keeping up with the frightened herd. 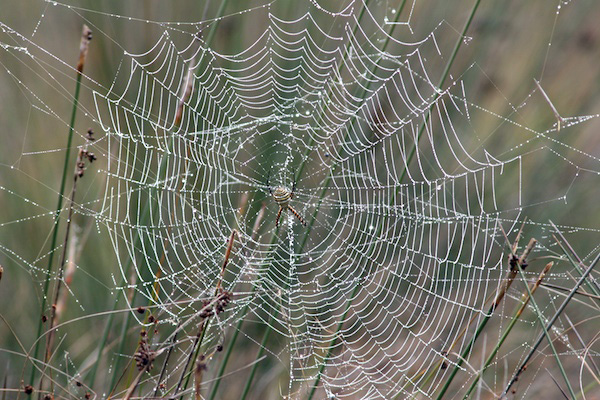 Our ultimate destination was the beach. It was time to pick up the pace, as we headed though a wide clearing amid the forest. Here, the landscape changed from flat land to sets of rolling dunes, partially covered in grass. I signaled Figo, ever so slightly, and we launched into a smooth canter, accelerating into a swift gallop. Slower and faster, down and up the dunes, we raced through the wide clearing for what seemed like an eternity. I guess I was used to the stirrups. My seat was cozy in the sheepskin as we headed to a region of sugary sand dunes. 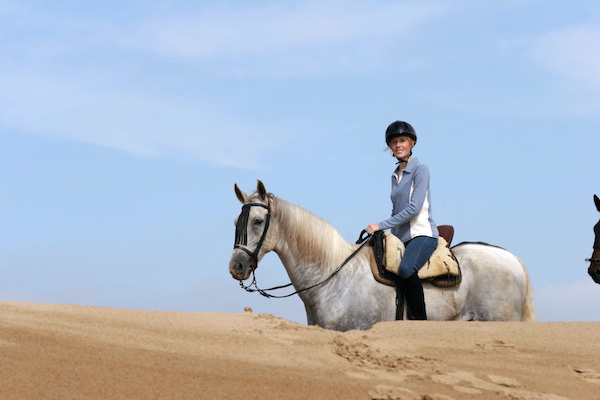 In Doñana, there are both stationery and mobile sand dunes. The forest became increasingly thin as we journeyed closer to the larger dunes. The sheer size of the dunes made me feel as though I was lost in the desert, as we descended down one dune, only to pop over the next to see a forest. The dunes are moving inland, by about three to six meters per year, swallowing forests as they go. Juan and I stopped near one giant, 40-foot high dune, which was about to bury a forest of verdant pine trees. 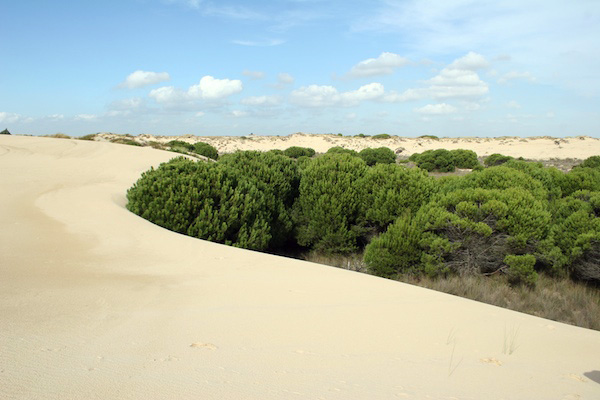 Horseback Riding on the Beach

We headed over a large dune, and at the top, saw our first glimpse of the Atlantic Ocean. The beaches of Doñana were devoid of people as we galloped down the shore. Figo was perfect, slowing down ever so slightly and speeding up, just as I asked him.

We rode into the ocean, making a flock of seagulls in our path take flight as we waded into the cool Atlantic. The smell of salty air mixed with the warm sun and sounds of crashing waves made the silence that Juan and I shared universally agreeable. We were alone at the tail end of Europe. 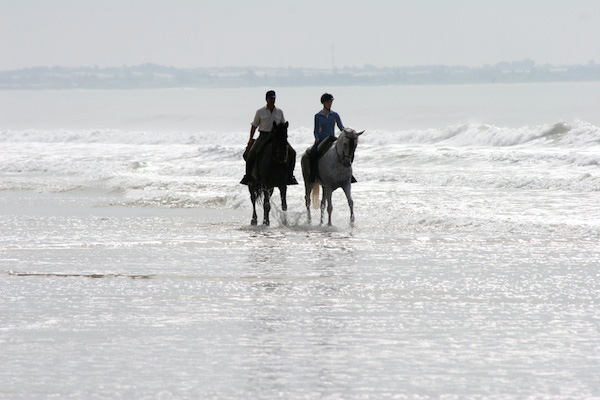 Galloping along the water, we passed a small fishing boat and a few large barges in the distance. We ventured further and further away from the clearing from which we originally emerged. Far away in the distance I could see the distinct marks of civilization - a patch of developed beach with hotels. Figo and I were alone, at the tail end of Europe.

Juan and I met up again, heading back into the ocean for another quick swim. "Me gusto Figo," I said, as I gave him a pat. It was then Juan told me the secret which had kept him quiet for so long. “You like him?” he asked. “Figo is a horse made for queens.” He was right, I thought. Figo is a fantastic horse. 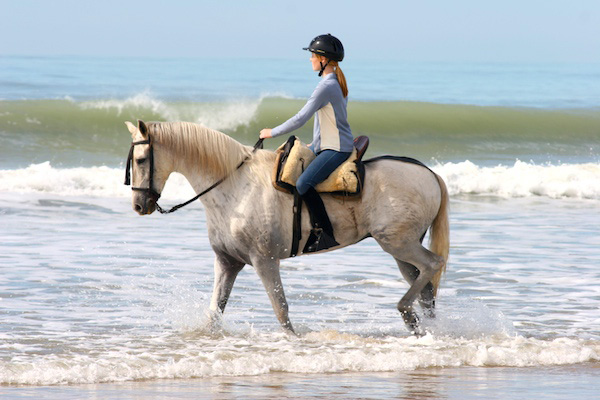 As we headed away from Doñana, we stopped at the white washed, pilgrimage town of El Rocio, which borders on some of Doñana’s marshes. Watching the feral horses grazing in the marsh made me think of Figo. I wished that I could take him home. He would be missed though, for I found out later that Figo truly is a royal horse. Whenever the Queen of Spain comes to Doñana, Figo is the horse that she chooses to ride. Now that’s a noble horse!

Darley Newman is a travel expert, published author and the three time Emmy nominated host, writer and producer of the Emmy-winning Equitrekking TV show. Get the Spain Equitrekking DVD and learn more about riding vacations.